Few things are as polarizing as director Joel Schumacher’s attempts at Batman 20 years ago. Even if you find something to like about his films, Batman Forever, and Batman & Robin, the Bat faithful’s impression of them is rather negative. Schumacher opened up about working on them recently and, perhaps to no one’s shock, the process was rife with headaches and tall tails.

In an in-depth Vulture interview, Schumacher looked back and shared some stories from those 90s entries many malign for their camp. He had a lot to say about the atmosphere on the set of Batman Forever and how it wasn’t helped by the animus Tommy Lee Jones expressed toward costar Jim Carrey, who worked very closely as the criminal duo of Two-Face and Riddler. 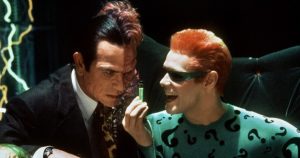 Jones, whose own performance was ridiculous and hammy, is serious about his acting and didn’t take well to the manic antics Carrey is known for. In fact, Schumacher had previously described Jones as an “asshole” in People Magazine.

Nevertheless, he had praise for him saying, “He was fabulous on The Client. But he was not kind to Jim Carrey when we were making Batman Forever.”

According to Schumacher, that created problems when shooting scenes where the two played opposite one another:

“Tommy is, and I say this with great respect, a scene-stealer. Well, you can’t steal the scene from Jim Carrey. It’s impossible. And, I think it irked Tommy.”

Schumacher reprimanded Jones for his harsh treatment as unbecoming for an actor of his caliber:

“He did not act towards Jim the way an Oscar winner with a star on Hollywood Boulevard, being the oldest member of the cast, and having such a distinguished career and the accolades to go with it, should have acted towards Jim.”

And it got pretty heated, though as Carrey tells it, he tried to make peace. On the eve of a big scene together, he ran into Jones at a restaurant and found out the veteran actor had major problems. Whether it was professional jealousy or an issue with Carrey’s acting style, an exchange occurred. (Related: Tommy Lee Jones Couldn’t Stand Jim Carrey While Filming Batman Forever!)

Carrey recounted it to Norm MacDonald in 2017:

“The maitre said, ‘Oh, I hear you’re working with Tommy Lee Jones. He’s over in the corner having dinner.’ I went over and I said, ‘Hey Tommy, how are you doing?’ and the blood just drained from his face. And he got up shaking — he must have been in mid kill me fantasy or something like that. And he went to hug me and he said, ‘I hate you. I really don’t like you.’ And I said, ‘What’s the problem?’ and pulled up a chair, which probably wasn’t smart. And he said, ‘I cannot sanction your buffoonery.’” 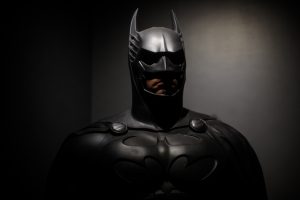 Jones may have been a handful, but Schumacher had telling words talking about Val Kilmer, who starred as the Dark Knight that first time, never returning. “I didn’t say Val [Kilmer] was difficult to work with on Batman Forever,” Schumacher clarified. “I said he was psychotic.”

He contrasted Jones and Kilmer as performers:

“Here’s the difference between Val Kilmer and Tommy Lee Jones. I don’t care what state Tommy is in emotionally, when that camera rolls, there is no bad take. Val is a different story.”

Though always the director’s choice for Batman, Kilmer had some bizarre behavior everybody put up with. People had to call him “Mr. Kilmer,” he smoked on set and put out a cigarette on a cameraman, reportedly. He also allegedly covered himself in blankets all the time, and delivered lines in a subdued manner, under his breath.

The difficulties boiled over on Kilmer’s next movie, The Island of Dr. Moreau, where his ego was out of control and he had an alleged “nervous breakdown.” Schumacher, who was filming Batman & Robin at the time, recalled the story he was told by Moreau’s ousted director Richard Stanley:

“I was not there. I think Richard Stanley told me he had a nervous breakdown.”

Dr. Moreau also starred the notorious Marlon Brando as the titular Doc. Brando is known for being hard to work with, in his own right, but he quickly got fed up with Kilmer and pitched the former Batman’s phone aside before rebuking him. Schumacher explains:

“I do know Marlon Brando threw Val’s cell phone in the bushes and said, ‘Young man, don’t confuse your ego with the size of your salary, ever.'”

In spite of it all, Schumacher calls Kilmer “a fabulous Batman.” And he isn’t the only director who favors the Batman he worked with. Zack Snyder shared similar sentiments about Ben Affleck whom he declared his favorite. (Related: Justice League Director Zack Snyder Reveals Who is Favorite Batman Actor Is)

It Ain’t That Kind o’ Movie 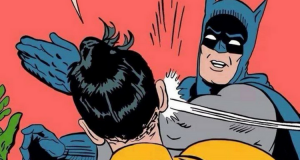 Kilmer, Jones, method actors, and production headaches aside, the consensus is Batman & Robin is the real dud. Among its problematic acting, script, and color palate, another charged lodged against it is the film is homoerotic citing the redesigned Batmobile and Wayne’s dialogue concerning marriage. Some of that has to do with Schumacher’s sexuality which he acknowledges. “If I wasn’t gay, they would never say those things.”

“This all started way before me. Long before I came along, someone wrote a whole thing about what the real message of fairy tales and children’s stories are. Snow White was all about having bad stepmothers. And Batman and Robin are two homosexual men living in a cave, living together. There’s always been this thing about Batman and Robin being gay.”

Batman was accused of being gay or homoerotic as far back as the Senate hearings of the 1950s and the publication of Fredric Wertham’s Seduction of the Innocent, so it isn’t anything new. Schumacher gave his opinion,

“No. Nor do I ever think Batman and Robin are gay. There were a lot of people who I would say, in one particular community, wanted George Clooney to be gay so badly.”

Schumacher apologized in the past for his take on the Caped Crusader, still considered the worst by many.