Love Actually actor Hugh Grant took to Twitter to curse out British Prime Minister Boris Johnson after he announced ambitious plans for the country and a Queen’s Speech would take place on October 14th.

Grant wrote on twitter, “You will not f*** with my children’s future. You will not destroy the freedoms my grandfather fought two world wars to defend. F*** off you over-promoted rubber bath toy. Britain is revolted by you and your little gang of masturbatory prefects.”

You will not fuck with my children’s future. You will not destroy the freedoms my grandfather fought two world wars to defend. Fuck off you over-promoted rubber bath toy. Britain is revolted by you and you little gang of masturbatory prefects. https://t.co/Oc0xwLI6dI

Grant has previously described members of the Tory party as “swivel-eyed spittle-flecked nut jobs.” He would then respond to one user who noted that 17 million individuals voted for Brexit writing, “No. F*** off. It’s my country as much as yours. I won’t have it f***** by the dim and bigoted.” 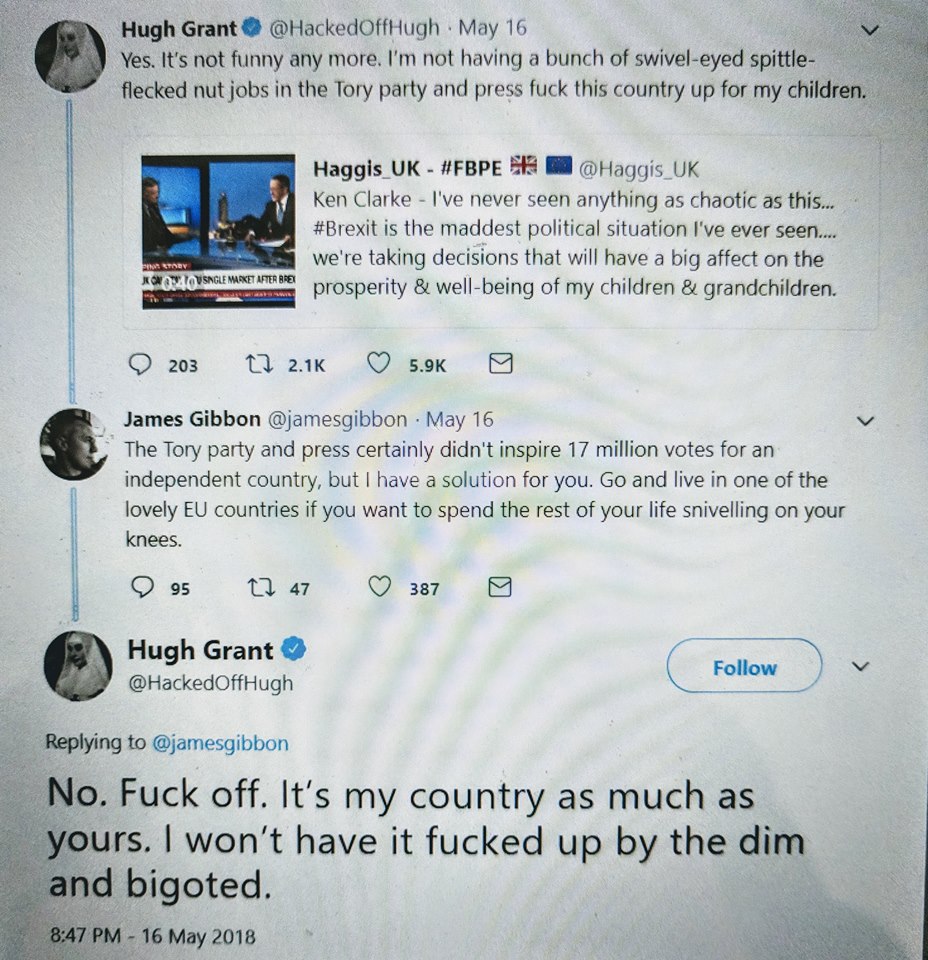 Grant will star in the upcoming film The Gentleman from director Guy Ritche alongside a star-studded cast that includes Matthew McConaughey, Charlie Hunnam, Colin Farrel, Henry Golding, and Michelle Dockery.

He also stars as Jonathan Sachs in the upcoming television drama The Undoing, which is set to premiere on HBO. The series stars Nicole Kidman, Donald Sutherland, and Noah Jupe. The show will follow Kidman’s Grace Sachs who is on the verge of publishing her first book when her life is turned upside down by a violent death and a missing husband. She must remake her life for herself and her child.

What do you make of Grant’s recent comments directed at British Prime Minister Boris Johnson?