Former Director of Operations for the A-Kon anime convention and self-professed journalist Shane Holmberg was recently denied his request to purchase a billboard ad space with the intent of displaying an animated gif labelling Dragon Ball Super: Broly voice actor Vic Mignogna as a ‘sexual predator.’

On November 11th, multiple Twitter users engaged in a discussion about various aspects of Mignogna’s case with T. Greg Doucette, an attorney and vocal KickVic supporter. As the conversation turned to the topic of whether labeling Mignogna as a sexual predator qualified as defamation, Doucette stated that “it’s not defamation when it’s true.”

It’s not defamation when it’s true 🙃

(Seriously though, I need @Emm_Initiative to work “The Defamed” into a future banner. Sounds like a working title for a grimdark or horror anime series)https://t.co/4MwSIZOMrJ

Doucette’s position was supported by his followers, including user Tyler Wolff who stated that one could purchase a billboard advertisement that read “Vic Mignogna: Sexual Predator” and that “there’s not a damn thing he or his lawyers could do about it.”

Hell, you could rent a billboard and have the hair pulling photo from his depo and the phrase “Vic Mignogna: Sexual Predator” and there’s not a damn thing he or his lawyers could do about it.

Be lying if I said I haven’t looked into the cost of billboards in Texas.

In response to Wolff’s comments, Holmberg replied that he had found a billboard advertising firm, Blip Billboards, which offered campaigns that allowed one to “set your own daily budget.”

He then shared a screenshot showing that he had submitted a campaign featuring an animated GIF labeling Mignogna a “sexual predator” and that it was “under review.”

For instance, this one that is under review. pic.twitter.com/JnMU7vJjcD

I feel like I am doing a service for my community. 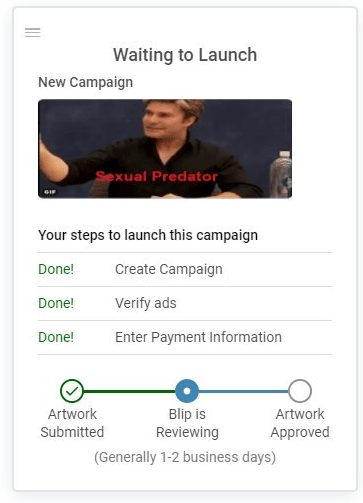 Holmberg states that he had set his budget at $5 USD a day and noted that he hoped “the word gets out” as a result of this campaign:

You can literally set your own budget. Not sure how much $5 a day gets you, but there are bound to be views. This one is in a hot spot area so at least the word gets out. pic.twitter.com/2m8piHoE8P

However, after the campaign was brought to the attention of Blip Billboards, the agency ultimately stated that Holmberg’s “ad will not be approved.”

So I was just informed that Shane is renting a billboard to call @vicmignogna
a sexual predator, @TyBeard10
keep an eye on it,this is obvious harassment. These people just will not stop defaming the man. They just keep on & on. pic.twitter.com/3SMlCXx4Of

@blipbillboards question? do you allow your services to be used to openly defame a innocent man?
this shane holmberg person has the intention to call someone a pedophile using your products.
thanks

No, we don’t! Their ad will not be approved.