In the latest development in the sexual abuse lawsuit filed by Disney’s Best Friends Whenever actor and Forever in Your Mind (FiYM) member Ricky Garcia, the actor’s mother has come forward with further information detailing the alleged abuse suffered by Garcia at the hands of Hollywood executives.

Tammy Garcia details, “There are pedophile rings all throughout Hollywood. We stumbled into one of those rings.”

She added, “The one thing that can fix this is talking about it, but Hollywood doesn’t want to talk about pedophilia.”

Over the course of two months, Tammy provided FitzHenry with “a stunning timeline of events as well as […]emails, written witness testimonies and documents compiled for the civil lawsuit, all of which detail the years of torture and abuse her son suffered, the names of those who partook, those who knew, and those who covered it up.”

According to Tammy, Ricky was first abused by Harte and his associates during a trip to Catalina Island, wherein Ricky and his FiYM bandmates were plied with alcohol, a practice Tammy says is “all completely normal in Hollywood.” The boys were then taken advantage of.

“Not long after arriving in L.A., Ricky teamed up with Emory Kelly and Liam Attridge to form the boy band Forever In Your Mind.

Shortly thereafter, during an overnight ‘songwriting’ trip which was strictly ‘no parents allowed,’ Ricky and his bandmates, were taken to Catalina Island by Joby Harte and several songwriters, all adults.

Once there, the young teens were plied with alcohol including Scotch, tequila, vodka and champagne, purchased and served by Joby and the other adults. Ricky and Emery both drank to excess, to the point of being sick. After which Joby undressed and bathed Ricky, then Ricky blacked out. Ricky woke up the next morning naked in bed with Joby, having no memory of what had happened.

This began a pattern that would go on multiple times per week for four years, steadily progressing to include all forms of sexual abuse, including rape, as well as abuse by others in addition to Joby Harte.”

Among the reported incidents described by Tammy was an incident involving her middle son, Ricky’s brother, and an aggressively predatory Larsen:

“According to the documents, an incident occurred involving Tammy’s middle son, who’d been invited to attend the awards with his brother. Nils Larsen aggressively pursued the young man, despite repeated attempts to inform Larsen that he was straight. The message was not being received. Ricky’s brother ended up having to jump the fence and flee on foot to escape Larsen’s unrelenting sexual advances.”

In another shocking moment, Tammy claims that he was sexually molested by “Marketing and PR veteran Lisa Delcampo” at the “permission” of Harte at a party hosted at the home of Anna Faris and then-husband Chris Pratt:

“According to Tammy and Ricky’s testimonies, as well as the lawsuit documents, at the home of this powerful, famous Hollywood couple, Ricky was again served alcohol openly and excessively. And at one point during the night, Marketing and PR veteran Lisa Delcampo, the long-time “right hand man” to Lance Bass of NSYNC, and yet another good friend of Joby Harte’s, took Ricky, a minor, into one of the bedrooms and sexually molested him after being granted permission to do so by Joby Harte in what one could conclude amounts to nothing less than child sex trafficking.”

Sara Espiritu, a “28-year-old Walt Disney Studios employee,” was alleged by documents and witness testimonies to have “cultivated a sexual relationship” with Ricky. Though this alleged relationship was supposedly brought to Disney’s attention, they attempted to cover-up the situation and withheld the information from her:

“Disney was made aware that their adult employee was having a sexual relationship with their talent Ricky Garcia, a minor, as Joby Harte discussed the matter with Hollywood Records Senior Marketing Manager Michelle Alexander. However, not only did no one tell Ricky’s mother, Tammy, but the Disney Talent Relations employee was not investigated for having sex with a minor, nor was she fired from the supposedly family-friendly behemoth.

The Disney Corporation handled the situation by transferring Ms. Espiritu out of Talent Relations to another department within the company.”

When Ricky finally confronted Harte about the years of abuse, Harte informed Ricky that he had secured FiYM a new tour in support of their second album, a tactic which Harte’s former assistant, Alli Bohl, described as “a clear manipulation tactic to pull Ricky back in and make it harder for him to escape Joby.”

After Bohl informed Tammy about Harte’s abuse, Tammy met with Harte and, in a self-professed “major life regret,” decided to pursue a solution to “the situation privately as opposed to going to the authorities.”

In December of 2018, Ricky finally went to the authorities and informed the LAPD of the abuse. However, with the LAPD failing to question Harte and the DA’s office claiming there was limited evidence to support his claims, the case was ultimately dropped:

“In December 2018, after other members of Ricky’s family, including his father, were made aware of the abuse, Ricky finally went to the police, filing a report with Officer Josephina Torres of the LAPD.

According to Tammy the investigation was flawed from the start, to say the least, “Joby was never even interviewed or questioned by the LAPD.”

The other band moms also corroborated the fact that Joby was never questioned by the LADP.

Then, in February, in what was a crushing blow for Ricky, the DA decided not to prosecute, claiming there was not enough evidence, and the case was closed. When Ricky’s attorney attempted to press the issue, Officer Torres did not return his phone calls.”

Shortly after the case was dropped, an anonymous e-mail, provided to FitzHenry by Tammy, was sent to “several hundred people within the industry, including people within Disney” tilted Urgent Alert Regarding Joby Harte. This message sought to warn others about Harte’s history of abusing numerous victims:

“This letter is being sent to you out of great concern for young actors and musicians who are doing business with Joby Harte, a talent manager from The Paternership, LA with whom you may do business with.

Joby Harte has sexually molested one of his clients, a young Disney talent and musician; during the years the boy was 14-18 years old. Though an official report was filed, unfortunately, due to the lack of corroborating evidence, official criminal charges could not be filed by the LA County District Attorney. In this time that many young people are coming forward, this travesty is being swept under the rug due to lack of evidence or witness’s that refuse to come forward. This boy had nothing to gain and everything to lose by bravely coming forward.

This may not be the best way to share this unfortunate information with you, however it is necessary that you are made aware and have the opportunity to take action. Sadly for reasons of protection, I must remain anonymous but hope that you take this as seriously as many of us have.

A screenshot of the letter was provided by Tiffany FitzHenry, which you can see below. 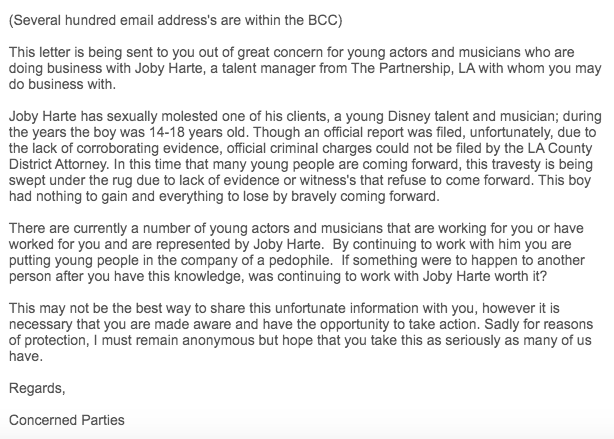 Ultimately, despite the message and a conference call with Bohl and Ricky wherein the two confirmed the abuse, no action was taken against Harte, who currently represents another Disney boy band, In Real Life.

In the lawsuit filed by Ricky on September 11th, 2019, the young artist claimed that Harte assaulted him “on an almost weekly basis.”

In a statement provided to USA Today by Ricky’s attorneys Ben Meiselas and Michael Popok, they described the legal action as Ricky “bravely [stepping] forward to join the #MeToo movement”:

“Our client, Ricky Garcia, was a preteen and teen music and acting star in the making. Tragically, and as alleged by him under oath in the complaint, high-powered male entertainment industry executives, led by his former manager Joby Harte, who were responsible for nurturing his career, instead sexually preyed on his economic and emotional vulnerability, and sexually assaulted and raped him. In twisted fashion they inflicted injuries and shame on our client that have derailed his promising career and that will take him a lifetime to recover from. Mr Garcia has bravely stepped forward to join the #MeToo movement, to reclaim his dignity and declare that victims like him must be heard.”

He wrote, “Today was one of the most difficult days of my life. It was through the support of my family, friends, all my supporters, and most of all God that I summoned the courage to speak out against the executives who sexually abused me as a child.”

He continued, “Sadly, I know my experience is just one of many and I hope my actions today will help others who experienced abuse to know that they are not alone and that there are people in this world fighting for them.”

As of writing, Disney has not publicly responded to the expose published by FitzHenry.