Fans… You asked – we listened. This one’s for you. #BeLegendary #ForTheFans #KCC62020https://t.co/P6XIdWsjBa

Following this announcement, users across various social media platforms, particularly members of the anti-Mignogna collective ‘KickVic,’ quickly began to protest the convention’s decision to invite Mignogna. Many fans cited the allegations of sexual misconduct against Mignogna as evidence that the convention was not only creating an unsafe environment for fans, but that it was also promoting sexual assault.

FYI friends, avoid this convention. It supports sexual assault and willingtly puts its attendees at risk by inviting sexual predators like @vicmignogna

Hey guys in case you were scheduling cons this year, Kitchener Comic Con just invited V*c M*gnogna to their con. That’s the voice actor who is well known for inappropriately touching underage female fans and sexual assault within the industry. So heads up. pic.twitter.com/c5acowcZMK

Just remember, when he makes a scene, makes an ass of himself or god forbid makes a move on anyone, it’ll be #forthefans. Hey, I’m sure some people want to meet Kevin Spacey, want to do that, #forthefans? What about Harvey Weinstein? Or John Wayne Gacy? Come on, it’s #forthefans

So I guess your attendees safety isn’t important

It’s come to my attention that I appear in a guest announcement video for Kitchener Comic Con. It doesn’t specifically state that I’m a guest but to clarify and prevent any inference, I’m not a part of the event, won’t be appearing there, and haven’t been associated with them for many years. I would comment on this video to clarify that I am not attending, but they’ve turned off the comments.

Despite including me in the video, when I commented on their event page that their announcement for their “big guest” seemed to be purposely hidden under a link and not revealed in the text of the video (the video that includes the photo of me from many years ago) and raised the allegations against that guest, they instantly blocked me from their page. This is not a surprise, as they’ve been aggressive with other people who have posted anything negative to their page in the past, up to and including sending fake legal threats to anyone who said anything negative online.

Before attending, you should do your own research on both their guest of honor and the convention itself to see what past attendees, volunteers, and guests (including myself, although I’ve been quiet about it on this page until now out of a desire to remain professional) have experienced at KCC. There are many exhaustive posts with screenshots. 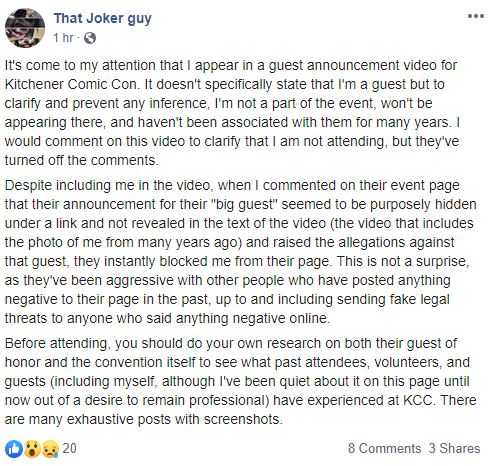 In one particularly combative exchange, as seen in emails obtained by anime news site NyanNet, Kitchener Comic Con reached out to one of their attendees who had “violated the agreement for our cosplay section” due to a Facebook post which claimed that the convention “does nothing to stop/prevent/recommence sexual harassment of their attendees.”

The cosplayer attempted to claim to “personally have made reports” and that in “the short time that post has been up I’ve uncovered 17 cases of assault, harassment, and abuse.”

When Kitchener responded that the cosplayer’s report was based on a consensual event and asked her to provide evidence of said assault and harassment, the cosplayer simply responded “Y’all can go to Hell.”

The email correspondence from Kitchener reads:

“Greetings Lynn, I wanted to contact you and inform you that we were made aware of your posting on Facebook here:

‘[Editor’s Note: The following is the transcription of the Facebook post.] Today Dan and I withdrew our support from KCC. We can not support a con that does nothing to stop/ prevent/ recommence sexual harassment of their attendees and invites a man charged with several accounts of harassment and assault as their “guest of honour” we are very disappointed in the organizers.’

[Editor’s Note: Kitchener’s Email correspondence continues.] And wanted to make you aware that you have violated the agreement for our cosplay application, section 2.

I am disappointed that you chose to take this action, instead of discussing things with us before taking the actions you have. While we aren’t going to ask you to remove any of the infractions, we did want to inform you of them.

This type of action unfortunately will affect any business between our parties current and in the future.

We do wish you all the best.”

The cosplayer would respond:

“Unfortunately I can not say I regret my post. As I have done further research I have found several accounts of harassment and assault that were not addressed, this guest being the cherry on top. While I may in future attend KCC I can with absolute honesty say I will never be able to show my support since it goes against my brand. I am sorry you feel slighted by my post but I stand by what I said.”

“You’re fully entitled to your opinion, though I do wish we would have had the chance to discuss things to compare points and hopefully educate each other.

This isn’t about feeling slighted, this is simply about being professional with each other and it’s disappointing that you chose not to honor what you agreed to. Again, we’re not asking you to remove anything, just making you aware of things.

To date, we haven’t received any complaints or concerns about sexual harassment at all during our convention. While there may be plenty of individuals who are sharing stories that are taken well out of context and outright fabricated, again – none of those issues have been brought to us to be resolved in any manner.

I’m not here to try and change your mind about any guests, or members of our staff, Lynn. I just hope that in future, whether it be yourself or anyone else who have concerns, that they take thew appropriate steps to resolve issues instead of taking actions that don’t contribute to any kind of resolution, and only lead to mudding(?) of information and mistrust between all parties.

Our team only wants to put on a great, inclusive show for fans. Inclusivity doesn’t exclude people we don’t like, without having valid reasons or evidence to do so. I hope you are able to find the peace that you need, and perhaps one day you’ll find the enjoyment in our convention once again, that others are currently discovering.

Truly, do wish you the best.”

“And I know this to be a lie. I personally have made reports and on the short time that post has been up I’ve uncovered 17 cases of assault, harassment, and abuse. Why this con is alowed to run astounds me and the blatant denial is as much an admittance of guilt as I have ever seen. This is very offensive on several levels.”

Related: Vic Mignogna to Move Forward with Appeals Process as Defendant’s Motion to Dismiss is Denied

“We haven’t been able to find your email at all. We spoke with Michael, and he informed us that the interaction took place on video – that you and your husband both were agreeing to.

There has been 0 cases of assault, harassment, or abuse and I would caution against using that strong verbage. Once again, please provide any evidence of such things – such as police reports, court documents, etc, and I will happily retract my statement.

If you continue to perpetuate these types of rumors, I do want to caution that it is defamatory and we will proceed accordingly. We have attempted to be professional with you, and have only been met with hostility. If that is how you’d like to proceed, that is up to you. Please take some time to consider your actions, moving forward.”

The cosplayer then responded:

Despite these calls to protest, Kitchener Comic Con has not shown any intention of disinviting Mignogna, with the convention having just recently announced that the voice actor would be “hosting a FREE panel.”

Adding on to his LEGENDARY return to Canada, Vic Mignogna will be hosting a FREE panel , Saturday Feb. 29th, at 1pm!
Please check the Facebook invite page here: https://t.co/kPIsdiao3b
So you can STAY TUNED FOR MORE!#ForTheFans #BeLegendary #KCC62020 pic.twitter.com/rc26A7wdF4