Miles Luna, co-creator of RWBY and current Head Writer of Animation at Rooster Teeth, has claimed that Final Fantasy 7 Remake’s Tifa Lockhart is a “prostitute” based on her slightly revealing outfit.

On April 16th, Luna shared his thoughts on the newly released FF7R, stating that it’s a “weird game” because “sometimes you fight monsters, sometimes you look for cats with your prostitute friend,” referencing a side quest in which Tifa and a player-controlled Cloud search the Sector 7 slums for a child’s missing pets. 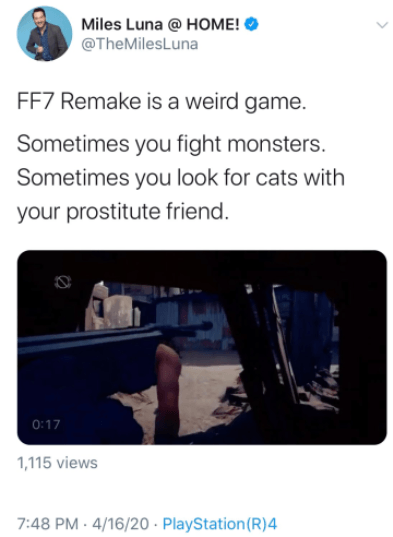 Despite the fact that her Remake design shows significantly less skin than her original appearance, Luna stated that his assertion was based solely on “her outfit”, particularly when “compared to literally every other person in this town.” 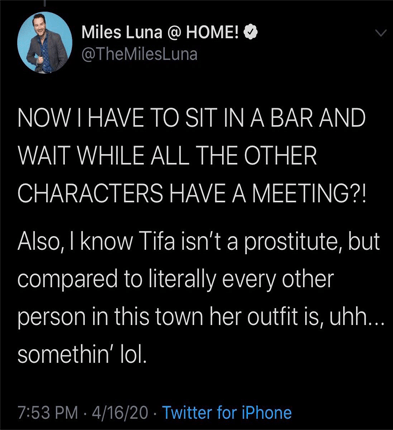 Luna’s claim comes despite the fact that Square Enix actively attempted to desexualize elements of Tifa’s appearance in her Remake design, including slightly reducing the size of her breasts and adding a black undershirt and thigh-high socks to her outfit.

These tweets were quickly met with a wave of backlash from both RWBY and Final Fantasy who took issue with Luna’s apparent hypocrisy, citing the appearances of RWBY characters such as Yang Xiao Long and Blake Belladonna who regularly wear more revealing outfits than Tifa, and his sexist interpretation of a woman as a prostitute based on her clothing:

Important note: there is nothing wrong with sex work!! But Tifa is a fucking bartender and martial artist and this was said in a way meant to demean her and sex workers. And what pisses me off is instead of an apology, it was deleted. Because no one likes to own up to anything.

God, Miles Luna has a galaxy brain head. Literally being a sexist to a female character that dresses more modestly than the one he wrote for in 3 Volumes of RWBY, and calls her a prostitute? He deserves all the flak he’s getting right now

A writer for RWBY criticizing Tifa’s design in FF7R is like the most “anime is cringe unless we westerners do it” thing I’ve ever seen. https://t.co/kdugdsQ8SF

*”RWBY Is a weird show. One moment you’re battling PTSD and the next you fight some dumbass teenage ex boyfriend with your prostitute friend”*

Ah, Miles, you should maybe watched your own designs before you made that dumbass comment about Tifa and her outfit pic.twitter.com/41ocJIlc9U

Many also found Luna’s comments to be outright disrespectful due to the fact that not only was late RWBY co-creator Monty Oum a massive fan of the character, featuring her heavily in his popular Dead Fantasy animation series, but RWBY’s protagonist, the aforementioned Yang Xiao Long, drew heavy inspiration from the Final Fantasy brawler.

Tifa was Monty’s favorite character and who Yang is based on. What the fuck, man

Talking shit about a character’s clothes like that is already bad, even worse when you realize Tifa was one of the deceased creator’s favorite characters, even inspiring one of the main characters of the show he’s currently writing
RIP Monty Oum, RWBY deserved better pic.twitter.com/8ZqEZE6Zyw

Really weird considering RWBY wouldn’t be a thing without Monty Oum, who wouldn’t have been discovered without his animations – one of the most famous having a Final Fantasy crossover with Tifa in it.

Didn’t Monty say that Yang’s battle style was influenced by Tifa? Who was one of his favorite characters? And was a frequent protagonist in Dead Fantasy? It just seems a little disrespectful from where I’m standing

Ultimately, Luna deleted his tweets and buried an apology in a reply to a Twitter user, stating that “upon reflection I agreed that it was a joke made in poor taste” because “having Tifa singled out definitely made it seem like I was specifically picking on her.”

I deleted it because upon reflection I agreed that it was a joke made in poor taste. I feel like all the FF7 characters dress ridiculously, but having Tifa singled out definitely made it seem like I was specifically picking on her. Sorry 😕

What do you make of Luna’s original comments regarding Tifa? Do you think he was joking as he claims he was?