Chris Hemsworth’s latest Netflix film Extraction has been labeled “problematic” and Islamophobic with people calling for a boycott of the film.

Twitter user @Armasfilm led the charge creating a thread explaining why she believes the film, written by Joe Russo, directed by Sam Hargrave, and starring Hemsworth and David Harbour, is Islamophobic and problematic.

why chris hemsworth, david harbour, sam hargrave, the russo brothers, and their new film “extraction” is problematic: a thread pic.twitter.com/8UlOwPqCfp

@ArmasFilm begins the thread claiming that Hemsworth portrays the white saviour trope because he plays a mercenary hired to save an international crime lord’s son.

Extraction is a white savior film in which Chris Hemsworth, most well known for his portrayal of Thor, stars as a mercenary hired to save the son of an international crime lord. pic.twitter.com/oD8TiewKq9

@ArmasFilm blames Hemsworth for the inclusion of this trope as well as what she describes as “promoting problematic themes” because he is an executive producer of the film.

Hemsworth is the executive producer pf this film. Starring in this type of film is one thing (like Brie), but preucing it means he had funded and had creative control over a film with promoting problematic themes pic.twitter.com/ws8OIeem3J

She specifically takes issue with the film’s poster because it solely focuses on Hemsworth’s character and does not leave “room for the brown actors to be showcased.”

The official poster shows Hemsworth solo, sympathizing with the white savior and his struggle leaving no room for the brown actors to be showcased (even tho this isnt the type of representation brown actors deserve) pic.twitter.com/TlJFmwPoeN

She goes on to claim the film “enforces the racist notion that all brown people are the same” because actors who are from India and Iran play citizens of Bangladesh.

The film was originally called Dhaka, the capital of Bangladesh and the film’s setting. The brown actors in the film are mainly from India and one from Iran. Having brown actors portray Bangladeshis enforces the racist notion that all brown people are the same, which they arent pic.twitter.com/Aw9tiZoXnZ

She then takes issue with how the film’s villains look claiming its Islamophobic because “many of the brown actors portray the villains of the film” and that “Bangladesh holds one of the largest and most devout Muslim populations.”

Many of the brown actors portray the villains of the film. Bangladesh holds one of the largest and most devout Muslim populations, so villifying them is subject to promoting islamophobic themes. pic.twitter.com/s5iCFGI5EA

In a bizarre twist, @Armasfilm personally goes after Hemsworth specifically because he “seemed careless about disrupting the civilians’ daily lives while filming.”

What makes this bizarre is that she shows a video of people with their cell phones out recording Hemsworth and trying to get a photo with him. She also uses quotes from him saying how much he loved filming those scenes and how much he loved the location and the people.

In fact in one of the clips Hemsworth describes the people’s reaction to each scene being cut, “After every take (when the director) called ‘cut’, there was a loud cheer. We felt like rock stars in a stadium. But the warmth and support we got while shooting there, no matter how disruptive to their daily lives, it was so good. People were so positive. I have huge appreciation to that.”

Hemsworth has done promtotion for this film and seemed careless about disrupting the civilians’ daily lives while filming. He was also going to do a global promo tour but it was canceled due to COVID-19 pic.twitter.com/EVdGfcs8Qr

Nevertheless @ArmasFilm continues her attack against Hemsworth. She specifically points to his past involvement in 12 Strong claiming the film “glorifies US military intervention in Afghanistan and vilifies Muslims once again.”

to be honest, we should have seen this one coming since he previosuly starred in 12 Strong, a movie that glorifies US military intervention in Afghanistan and vilifies Muslims once again pic.twitter.com/A23PMyexNT

She would then accuse him of culture appropriation.

As for David Harbour’s crime, he’s starring in the film which she describes as a “white savior film.”

David Harbour’s rule isn’t clear yet, but still starring in a white savior film is something that shouldn’t be done.

She then tells people to boycott the film saying, “Don’t watch Extraction when it comes out.”

so, don’t watch “extraction” when it comes out. this is coming from an indian muslim myself and this affects me deeply https://t.co/SMYOFR3w4f

She would go on to claim that she wasn’t trying to cancel Hemsworth despite calling for a boycott, accusing him of racism and Islamophobia.

To add, my thread was to strictly call Hemsworth out, not “cancel,” because cancel culture doesn’t exist. His career will be fine at the end of the day, but hollywood needs to not make this type of films anymore.

Then in another bizarre moment she claims that hating on celebrities is pointless.

Also, I think constantly hating on a particular actor/actress is pointless because if they want to speak out on an issue or apologize, it will fall on deaf ears. So call him out, but making hate tweets and death threats does nothing. Just focus on who you like after that.

YouTuber Mr. H Reviews would respond to the thread, “Honestly, you can just predict this stuff now, can’t ya? You just know this is going to happen. You just know it. Utter ridiculous.”

Extraction has received fairly positive reviews on Rotten Tomatoes. The film has a 68% Tomatometer rating from critics and a 70% Audience Score.

The film has a 56 Metascore from critics and a 6.3 User Score on Metacritic. 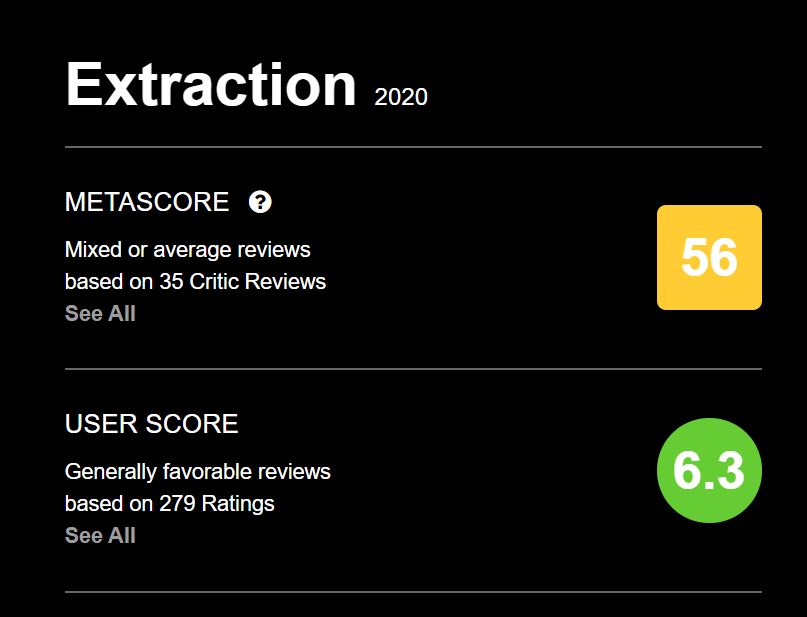 Extraction is based on the graphic novel Ciudad by Ande Parks, Joe Russo, Anthony Russo and artist Fernando León González. It is currently available to watch on Netflix.

“Chris Hemsworth plays a black market mercenary who accepts the most deadly of his career. You’ll be knocked out by the unrelenting action and mind-blowing hand-to-hand combat acclaimed stuntman Sam Hargrave packs his directorial debut with.”

EXTRACTION
Chris Hemsworth plays a black market mercenary who accepts the most deadly extraction of his career. You’ll be knocked out by the unrelenting action and mind-blowing hand-to-hand combat acclaimed stuntman Sam Hargrave packs his directorial debut with. pic.twitter.com/CF0gWp027W

What do you make of @Armasfilm’s accusations against Chris Hemsworth and Extraction?