Nookazon, a popular fan run online exchange for Animal Crossing: New Horizons players to buy and sell in-game items, has become the target of a wave of criticism after the moderation team for the site’s Discord server attempted to keep chat discussions focused on the game rather than on the recent protests against police brutality taking place across the United States.

On May 29th, as protests and riots against the death of George Floyd began to erupt across the country, patrons of the public Nookazon marketplace unsurprisingly began to discuss the chaotic events unfolding around them. As discussions grew more heated and users began to change their display names to express their political views, specifically adding the terms “ACAB” and “1312” (acronyms both referencing the phrase ‘All Cops Are Bastards’) as a sign of support for the protesters.

Following these username changes, in an attempt to steer the server back to the topic of Nintendo’s island life simulator, moderators for the server began taking moves to limit the public usability of the terms, including banning the phrase ‘ACAB’ and its variants from the server and reaching out directly to users with the term in their usernames with a request to change the name, explaining that “we do not allow usernames with political/controversial statements.” 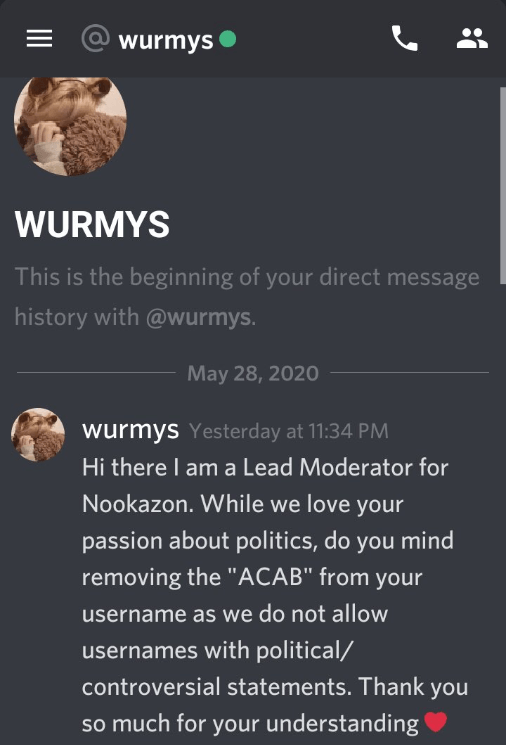 As noted in their initial requests and statements, the moderation team never banned the use of terms related to the Black Lives Matter movement, with one lead moderator even outright stating that “the server is definitely a supporter of the BLM movement” while noting their intent to “keep the discussion out of here as it can cause heated debates as well as expose minors to graphic videos of death.” 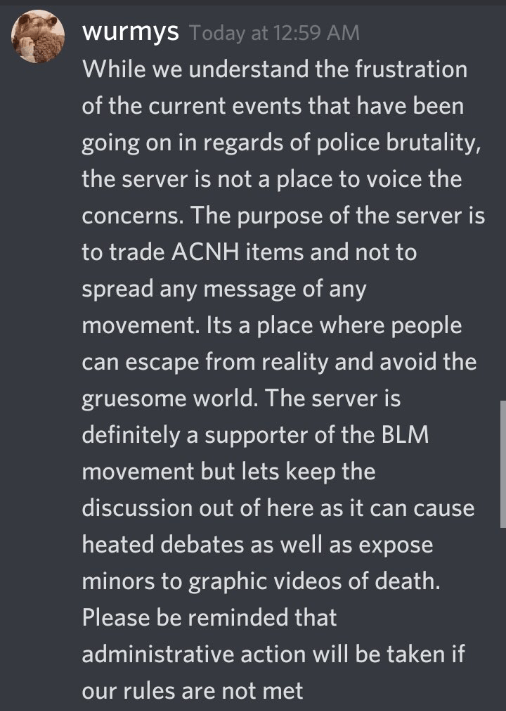 This sentiment was similarly expressed by other members of the moderation team, albeit some more tactful than others when advising that users should “take that energy and put it somewhere to make a change.” 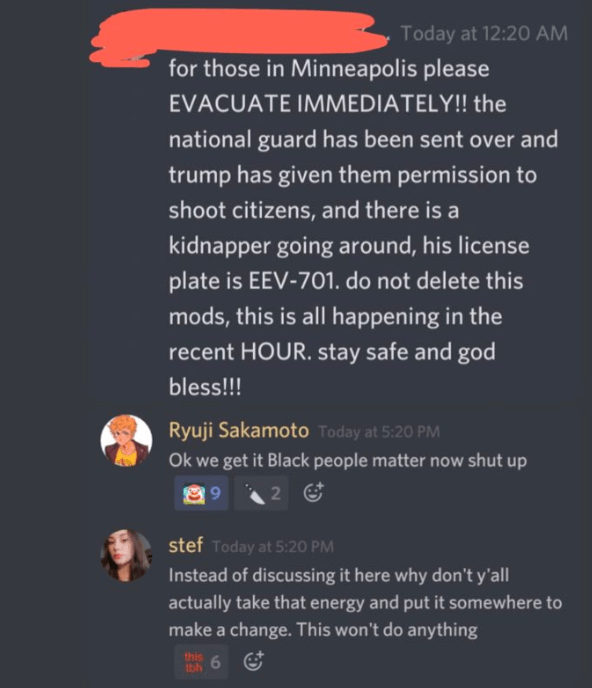 These attempts to limit the discourse surrounding the recent civil unrest was soon met with a wave of backlash, with many users accusing the site and server administration of racism and attempting to “silence people” who wished to express their views.

@nookazon y’all proud to be racist :)?

my discord feedback is that nookazon is taking the side of the oppressors. pic.twitter.com/t93DBCj5Zr

Fueled by their outrage, some fans took to raiding the Nookazon Discord server, spamming each possible chat channel with ‘ACAB’, ‘BLM’, and ‘1312’ and celebrating the distress caused to the server’s moderators.

Locked the channel and as SOON as they opened it, everyone went off pic.twitter.com/60oSkwm2KN

Funny update! Channels were removed and mods said it was an “error”
ppl are still discussing. yikes forever!

update update: We overtook them

Every channel is being over taken by messages of ACAB and BLM. People are still upset but I think there’s too many to stop. A nice thing to see before I leave the discord 🥰

Their discord is on fire rn. ACAB and BLM spam in every chat.

The accusations, spam, and harassment towards the moderation team eventually resulted in one member issuing their resignation, stating that “in light of recent events, I am officially announcing my resignation from the mod team.”

oop one of the mods stepped down pic.twitter.com/sC0eqOyN76

However, Nookazon was not without its defenders, as players across the political spectrum of beliefs stood by the server’s decision on the grounds that an Animal Crossing trading server was not a reasonable place to expect serious political topics or activism.

Almost every server I’ve ever joined from several different communities has this policy. Am I supposed to leave those too? Honestly I don’t believe there’s anything wrong with wanting their server to be a nonpolitical place. As long as they keep that same energy across the board.

They just want their server to be at peace. They are a goddamn virtual furniture selling platform. They don’t need all the controverse obstructing their work. Yes, the ACAB and BLM movements are really important, but they never said that they didn’t support it. They want peace.

this is incredibly stupid. i don’t see how they’re “taking the side of the oppressors” or being racist or whatever. animal crossing is a game about talking to animals and collecting fruits and whatnot. to many, it’s an escape from the dark and harsh reality we live in 1/?

something they can play to calm down and relax and stop stressing over problems in our lives. all nookazon is doing is enforcing that; they’re trying to create a space where people can relax and not have to deal with all the stuff going on in the world. 2/3

yes, this is an important issue people should be talking about, but it’s animal crossing for crying out loud

I’m pretty sure a server for discussing a children’s game is not the best place for talking about people bring murdered and riots as well as supporting violence. They didnt ban BLM, they literally say that they support it, just that the server is not the place to discuss it

Ultimately, in the face of the spam and backlash, the Nookazon administration issued a statement apologizing “for any deleted comments and the removal of meaningful discourse, genuine warnings, and signs of solidarity with the BLM movement” and announcing that “Nookazon staff members are collectively donating $500 toward the fundraiser sites listed in our statement.”

“Nookzonians, we hear you. We want to assure you that Nookazon is supportive of the Black Lives Matter (BLM) movement. Our intention was not to remain complicit or silence views during this political climate – our team was unprepared for a response to current events of this magnitude, which led to excessive moderation.

We apologize for any deleted comments and the removal of meaningful discourse, genuine warnings, and signs of solidarity with the BLM movement. We acknowledge the importance of creating a safe space to have these conversations and educate each other on current events. Therefore, we have create a channel called #current-events where users can discuss politics, social justice, and human rights issues in a safe and constructive manner. To join the #current-events channel, you must opt-in to participate by clicking the check mark emoji. While this channel provides an open platform to discuss important topics, we will not tolerate profanity or any form of hate speech. Our community guidelines define hate speech as vulgar, derogatory, disrespectful speech toward users. This includes, but is not limited to, any opinions or statements that disrespect a race, ethnicity, sexuality, religion, or orientation.

Although we cannot retract the harm caused by our actions, our team promises to be more explicit in showing solidarity with BLM and continue to educate ourselves on issues related to racial inequity and systemic oppression. To further support the communities currently in need, Nookazon staff members are collectively donating $500 toward the fundraiser sites below.”

This statement has since been featured as part of a unique banner on the Nookazon website meant to direct their users to the above statement: 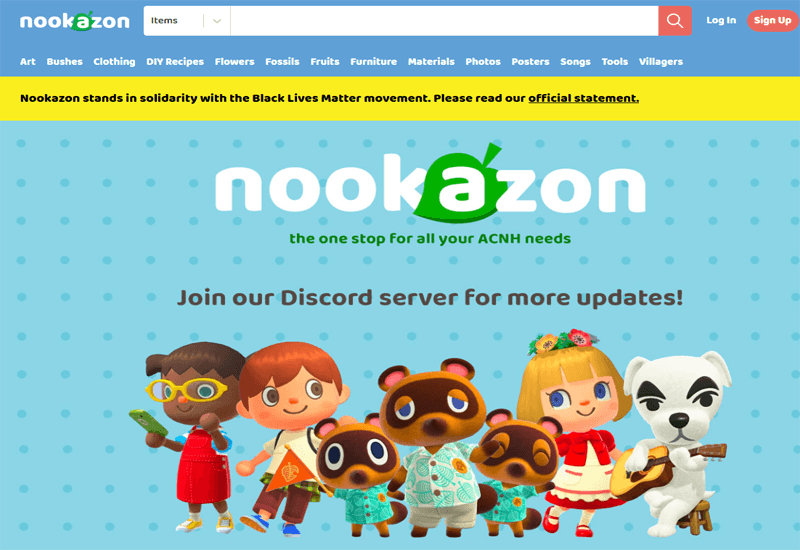 What do you make of this controversy?