As new waves of sexual misconduct and discrimination allegations sweep across various entertainment mediums, sci-fi author Jaym Gates has accused author Chuck Wendig of misogyny, claiming that the former Disney Star Wars writer has a history of bullying, gaslighting, and covering for predators.

On June 23rd, in the midst of the aforementioned wave of new allegations, artist Cara McGee came forward and revealed that author Myke Cole had once “spent an evening leering at me at the [Emerald City Comic-Con] bar, trying to pull me onto his lap, and told me he wanted to piss on me.”

As first reported by Bleeding Fool, McGee wrote on Twitter, “Hey while I’m here, how about that time Myke Cole spent an evening leering at me at the ECCC bar, trying to pull me onto his lap, and told me he wanted to piss on me, until another SFF writer tore into him for being a creep.”

Hey while I’m here, how about that time Myke Cole spent an evening leering at me at the ECCC bar, trying to pull me onto his lap, and told me he wanted to piss on me, until another SFF writer tore into him for being a creep.

As Cole began to face repercussions as a result of this accusation against him, which included Vault Comics dropping his upcoming debut comic book Hundred Wolves, Gates took to her personal Twitter page to share her feelings of anger towards what she perceived as the trend of “letting white men off.”

Gates is the self-professed architect of a 2013 campaign to spark a sexism controversy surrounding the sci-fi magazine Bulletin following the passing of author Mike Resnick.

She began, “Ah man, f*** it. I’m going to get hit for this and I don’t care. A white male author was outed for grooming WOC, for punishing them by blocking them from professional spaces if they turned him down, has now been outed for fantasizing in a public space about urinating on someone.”

Gates added, “He’s made half-assed apologies every time, blaming his intensity and being drunk. I know other victims who are terrified heh’ll think they spoke up bc he’s affiliated with law enforcement and the military and has a LOT of power.”

She continued, “And y’all are just like ‘oh no, he apologized, we cool.’ And just…what the actual f***.” (No, I am not naming him, I get brigaded by supposed allies if I do.)” 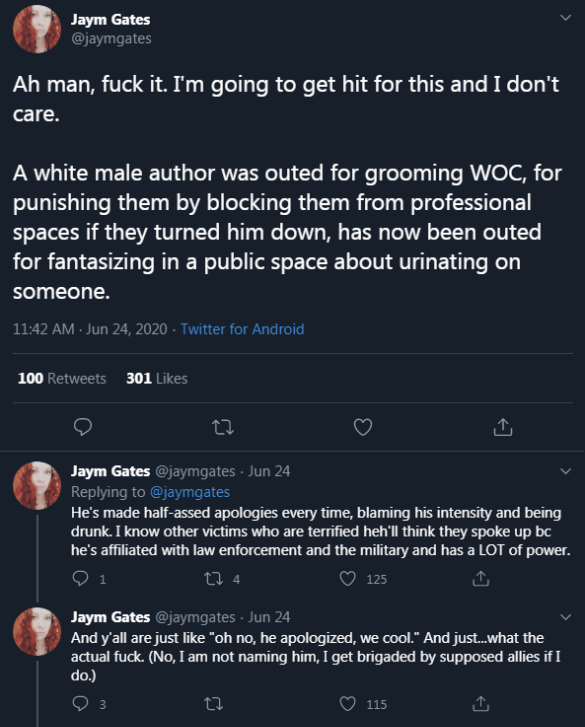 She goes on to list a number of unnamed authors that are allegedly blacklisted from the industry.

She starts writing, “Meanwhile, you have an Filipinx author who made mistakes years ago and apologized and got harassed, threatened, and shut out of the business permanently for some problematic in-game content.”

She continued citing an “Indian-American author and editor who used his position to groom women. He apologized, but last I saw, white authors were joking about making him regret it if he showed up to WorldCon.”

Next, she cited an Arab-American author who “got outed for touching a woman in a bar, then got hit with a racial attack (Arab pig, terrorist, we literally have screenshots of the racists claiming they made shit up). Apologized, badly, blacklisted from the industry.”

Gates then goes after people defending a number of the people who have been had #MeToo accusations made against them.

She writes, “Meanwhile, the same people going after these POC authors are doing contortionist acts to defend these white men. ‘He was just awkward.’ ‘He’s intense.’ ‘He didn’t know.'”

She added, “F*** you and your racist double standard. Call men to accountability but do it equally.”

She then calls for white men to not be let off.

She writes, “Stop letting white men off. Stop punishing POC like you’re just happy you finally found a safe way to be racist. Each of those incidents I spoke of was filled with people who were f***ing GLEEFUL about the change to go after these POC men.”

Gates adds, “White people are building their credibility by going after POC authors and anyone who points out the racism in MeToo and then turning around using that to shield white predators and it is NOT okay. Do better.” 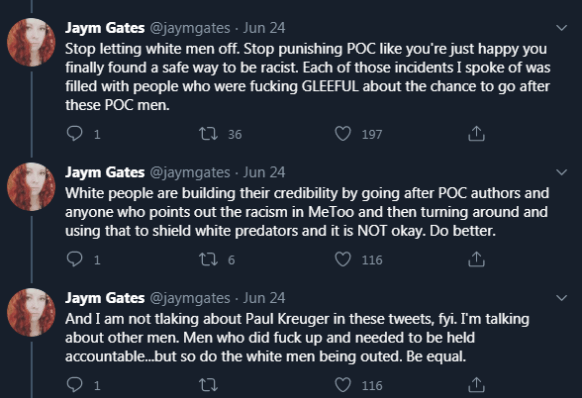 Gates then has words for the entire MeToo movement stating that it “has turned into a feeding ground for white men to prove how Good(tm) they are at Feministing.”

Gates then declares she wants these unnamed individuals to be cancelled writing, “Like, where are the calls for contracts to be dropped, books tours to be cancelled, companies to cut ties, mutual friends to be removed.”

Next, she targets female authors writing, “And it’s not just the guys. There are female authors I have screenshots of defending the guy the last time it happened and talking about how noble he was who are now happy to exclaim how everyone should have known.” 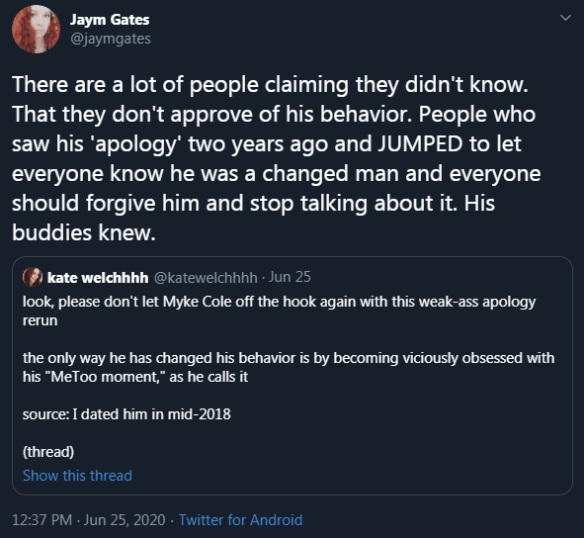 She then declared that she was going “F*** The Torpedos Full Steam Ahead” noting that further comments could be found on her Facebook page. 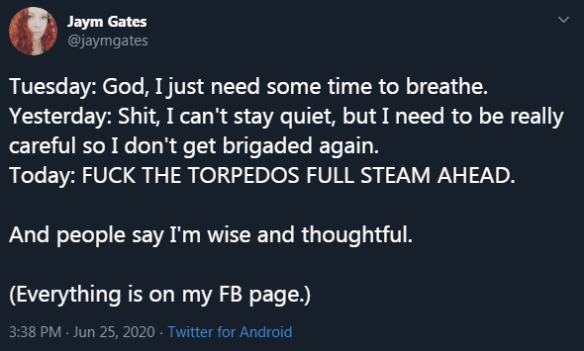 She continued her comments into the next day and onto Facebook, where Gates turned her sights towards Wendig.

She wrote, “Chuck Wendig demanded, repeatedly, that I be accountable for the behavior of a man I worked with when that man did wrong, up to and including the phrase “Well, you shouldn’t have let him to go that convention, then.”

Gates continued, “He told me he didn’t care, when I said Holden Shearer was fabricating claims against an Arab-American of being a terrorist and thief in an effort to cover for John Morke’s harassment of multiple female members of the community. 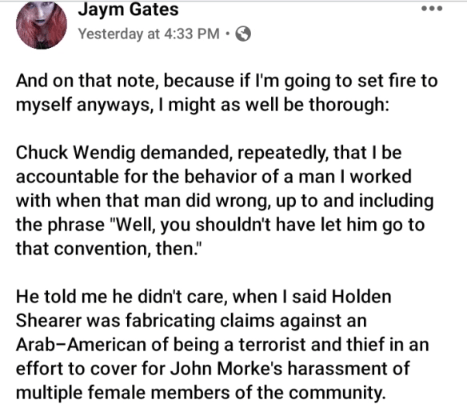 She continued, “He told me wouldn’t do anything because Jack Ketchum was one of their darlings, and everyone warned women they shouldn’t be alone in a room with Jack. (Then he posted a glowing eulogy when Jack passed. Also for Harlan Ellison.)”

“He has, in the past, compared rape to burglary, then deleted the post when called out,” she added.

Gates then stated, “He named me as a protector of harassers and abusers, but never named the person doing the harassing. His fans harassed and bullied me for 6 months, to the point where I was having daily suicidal ideation. I was not the worst-hit by that brigade, either.” 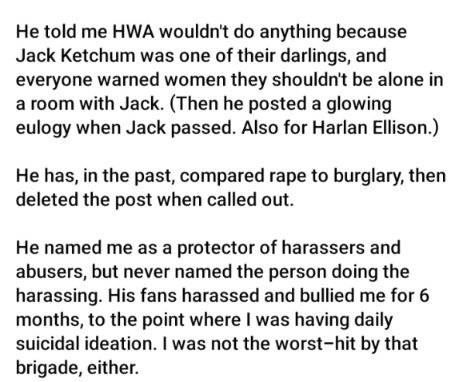 Next she stated, “He came to Myke Cole’s defense in 2018, while his fans were demanding that I leave the industry for fumbling my response to the other incident. Several other people now loudly castigating people for not calling Myke out sooner also posted long defenses of his ‘apology,’ which was of the same cloth as the one posted by the brown guy they were ripping apart.”

She continued, “I watched him build feminist credibility on my stumble, attempting to invalidate a decade of work in making this industry safer for women and queer folk, work that has damaged my career, my mental health, my physical safety, and many relationships.”

Gates then accuses Wendig of gaslighting and bullying her, “I stumbled once in a decade, and he gaslit and bullied me, demanded that I be personally accountable for a man’s actions, then lied about what he’d said and what I’d said, painted me as trying to undermine and sabotage victims, and then threw me to his wolves while he sopped up the accolades.” 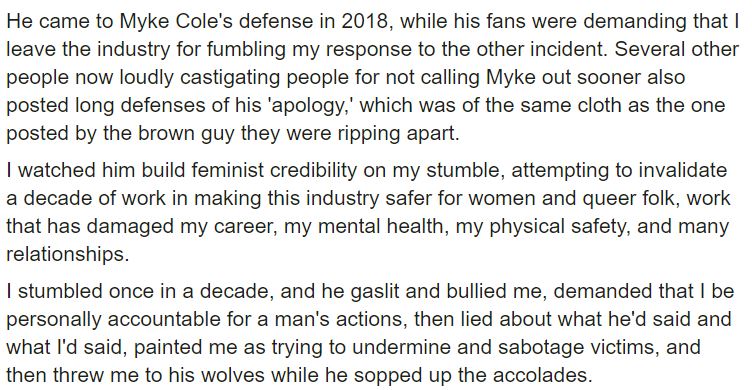 She then writes, “He doesn’t get to ride the white horse here. I’ve chewed on my sins for two years and put in the hard work to be accountable for my missteps and weak spots.”

Gates concludes saying that Wendig “has stomped all over over women to prove he’s the best feminist. I am not going to be silent about that for one more moment.”

He stated he was “deeply sorry” for his friendliness towards Cole and several other authors who are currently facing accusations.

He added that “he never saw the harassment or abuse in play.”

Wendig concluded his response by announcing that he “cut personal and professional ties with these men and will not be signal boosting them further.”

“My Twitter account remains locked due to GG-style harassment of me (death threats, doxxing, harassing my followers and repliers) tied to the Internet Archive situation, but those who don’t follow me wouldn’t have seen my recent statements, so I thought it best to put something here, too.

Recently it has come to light that a handful of authors inside science-fiction and fantasy publishing have engaged in various acts of harassment and abuse against women. These authors are authors with which I am friendly, particularly online — Paul Krueger, Myke Cole, Sam Sykes — and I am deeply sorry if that friendliness or if me boosting their work and amplifying their voices has in any way given them cover for their actions or given them unearned trust. I never saw the harassment or abuse in play, but my ignorance of it is not an excuse, and I should be better about actively attempting to make spaces like conventions and conferences safe. Some of the women who were harassed or abused are friends or acquaintances, as well, and that makes me heartsick to realize that I didn’t know or see what they were going through. It’s not enough to simply go along to get along, but rather, to maintain a vigil and to be ever on the lookout for harassment and attempt to call it in when witnessed.

I’ve cut personal and professional ties with these men and will not be signal boosting them further. I’m listening to victims and believe them. The men have apologized but it’s not on me to accept, deny, or judge those apologies.”

Gates would respond on Facebook in another lengthy post prefacing it writing, “Because I woke up to a lovely, chiding message of “Don’t you think you should let this be? He was just trying to help, why now?” I’m going to be a lot blunter than I was yesterday.”

She then goes on to detail a phone conversation she had with Wendig two years ago. 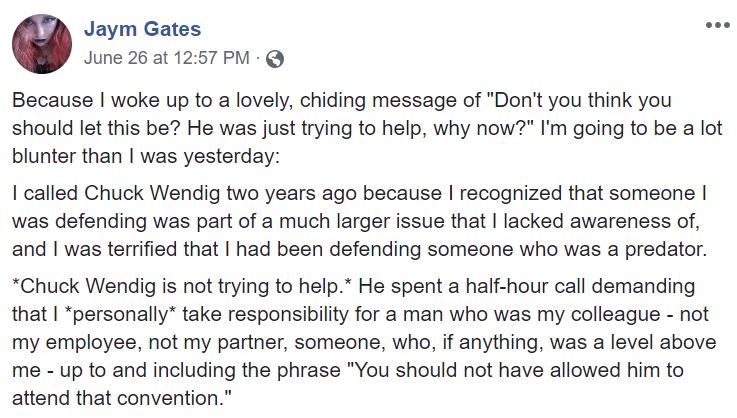 She continued to detail the phone call and claims that Wendig threatened her at the end of the call and accused her of “protecting an abuser.”

She continues claiming that women who speak up about abuse are ostracized and threatened.

She then reiterates her criticism of men claiming they didn’t know about abuse, specifically taking issue with people lauding Chuck Wendig.

She then details that she is speaking out because she’s “tired of seeing white men covering for each other at the expense of women and minorities.”

She also again reiterates her accusations that Wendig “gaslit and bullied” her.

She concludes writing, “If we’re going to have an honest about abusers, we need to start having an honest discussion about the white men who are profiting, literally, off of the abuse and harassment of women.”

What do you make of Gates’ accusations and Wendig’s response?