Former Reddit CEO Ellen Pao recently claimed that she, along with her associates at her former employer Kleiner Perkins, knew of Ghislaine Maxwell’s role in “supplying underage girls for sex” to notorious pedophile Jeffrey Epstein and those associated with him yet remained silent about the issue until Maxwell’s recent arrest.

On July 2nd, nearly one year following the suspicious death of Epstein in his cell at the Metropolitan Correctional Center, Maxwell was apprehended by FBI agents following a surprise raid on a secluded New Hampshire property.

The well-connected socialite has been accused of recruiting, supplying, disciplining, and even abusing underage girls in order to provide victims for Epstein and his circle of pedophiles.

U.S. Attorney Audrey Strauss stated, “As alleged, Ghislaine Maxwell facilitated, aided, and participated in acts of sexual abuse of minors.  Maxwell enticed minor girls, got them to trust her, and then delivered them into the trap that she and Jeffrey Epstein had set.”

Strauss added, “She pretended to be a woman they could trust.  All the while, she was setting them up to be abused sexually by Epstein and, in some cases, Maxwell herself.  Today, after many years, Ghislaine Maxwell finally stands charged for her role in these crimes.”

FBI Assistant Director William F. Sweeney Jr. also stated, “Preserving the innocence of children is among the most important responsibilities we carry as adults.  Like Epstein, Ms. Maxwell chose to blatantly disregard the law and her responsibility as an adult, using whatever means she had at her disposal to lure vulnerable youth into behavior they should never have been exposed to, creating the potential for lasting harm.”

“We know the quest for justice has been met with great disappointment for the victims, and that reliving these events is traumatic. The example set by the women involved has been a powerful one. They persevered against the rich and connected, and they did so without a badge, a gun, or a subpoena – and they stood together. I have no doubt the bravery exhibited by the women involved here has empowered others to speak up about the crimes of which they’ve been subjected,” Sweeney added.

After her arrest, numerous photos of Maxwell with high profile individuals, including former President Bill Clinton, Tesla founder Elon Musk, and current President Donald Trump, at various social functions began to circulate, with many speculating as to what her exact role with those photographed was.

A few days later, investor and venture capitalist Cyan Banister referred to these photographs in a joke on Twitter.

She wrote, “I used to be kinda sad that I wasn’t ever cool enough to get invited to some parties that people I know were invited to, but now, I’m super thankful that I’ve never accidentally had a photo of me taken with Ghislaine.”

Banister’s tweet would prompt a response from Pao who shockingly and bizarrely stated that, during a 2011 holiday party hosted by Kleiner Perkins which was attended by Maxwell, she and others “knew about [Maxwell] supplying underage girls for sex.” 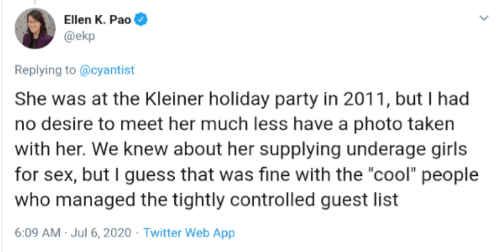 Pao was soon met with a wave of criticism, with many questioning why Pao did nothing with this supposedly common information at the time, an act which may have helped expedite Epstein and Maxwell’s arrest prior to 2019 and 2020, respectively.

Pao attempted to clarify that Maxwell “had not been charged” of these crimes during the 2011 party, reframing her knowledge of these crimes as ‘suspicions’ rather than outright fact. 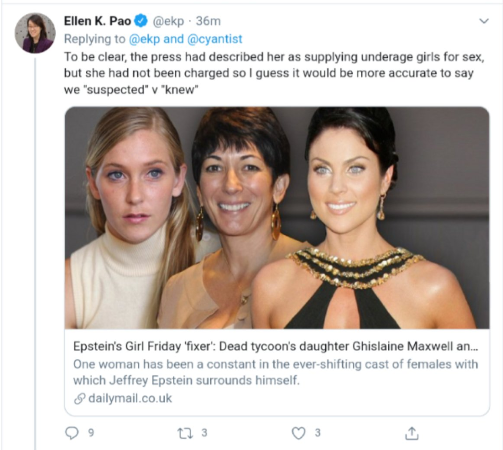