He began stating, “After talking with my wife, my assistant, and my Bat team, I’ve decided to delete my Twitter account after the Plot Holes campaign ends later tonight.”

Murphy then plugged a number of his upcoming projects including his upcoming two-part Catwoman story with Blake Northcott and Cian Tormey.

He also plugged an upcoming Batman: White Knight announcement teasing that he will be working alongside his wife and Matteo Scalera on Harley White Knight.

Next, he plugged his Plot Holes IndieGoGo. 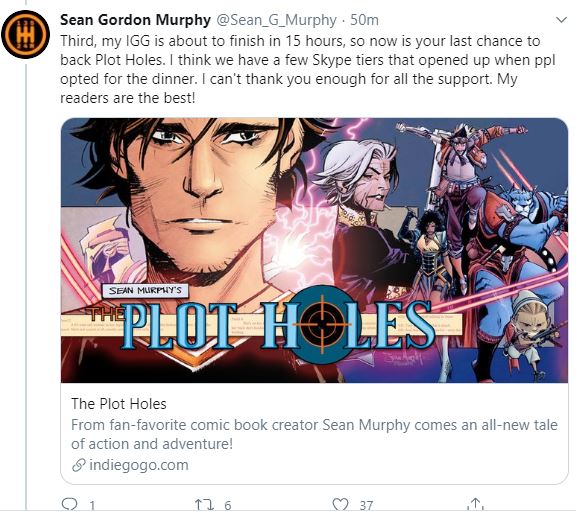 He then thanked his fans for supporting him on Twitter, “Lastly I’d like to thank my Twitter followers for all the great discussions and threads we’ve had over the years. You guys are awesome, I love meeting you at shows, and I hope you’ll continue to support White Knight as we continue to expand over the next few years.”

He wrote, “My career has exploded with Batman, and it’s taken some adjusting. My new role at DC is to protect what I’ve built with my team on White Knight.”

He added, “Our goal is to generate great content and big sales, and my involvement in Twitter no longer seems necessary to achieve that.”

Murphy’s decision to delete his Twitter comes after he’s been publicly pressured numerous times over the past few months.

In March, Murphy allegedly came under pressure from Tess Fowler after he had signed on to do a variant cover for Bigfoot Bill creator Doug TenNapel.

Murphy had previously shared TenNapel’s Bigfoot Bill 2: Finger of Poseidon IndieGoGo campaign in February and announced that he had done a variant cover for the campaign. 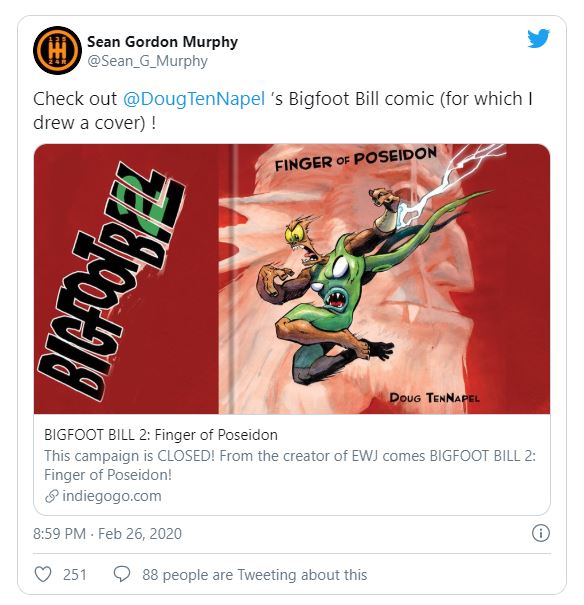 However, less than a month later, Murphy took to Twitter to announce he would be pulling his cover from the project.

He explained that his reason for dropping out of the project was that “it’s been brought to my attention that the creator has posted opinions that are anti LGBTQ.”

Shortly after pulling his cover from TenNapel’s Bigfoot Bill 2: Finger of Poseidon project, Stephanie Cooke would demand that he end his relationship with Blake Northcott.

Cooke specifically stated on Twitter, “And what about your work with CGer Bl*ke N*rthcott? Are you pulling your work from any of her projects as well?”

She would go on to call Northcott a “crappy person” in a lengthy thread in an attempt to shame Murphy to end his business relationship with her.

As noted above, Murphy’s two-parter Catwoman story with Northcott is in stores today.

Next, Murphy would be accused of supporting Comicsgate, a movement that has been repeatedly attacked in mainstream media outlets as well as outlets like CBR as racist and homophobic, despite evidence to the contrary.

Osajyefo wrote, “Sean Gordon Murphy pushes plausible deniability. But he knows Tenapal is a bigot, Indiegogo is comicstraint’s refuge, and his actions are dogwhistles to them.”

He added, “And because that he knows they’ll buy anything to own the SJWs – even a Drawn Together homage.” 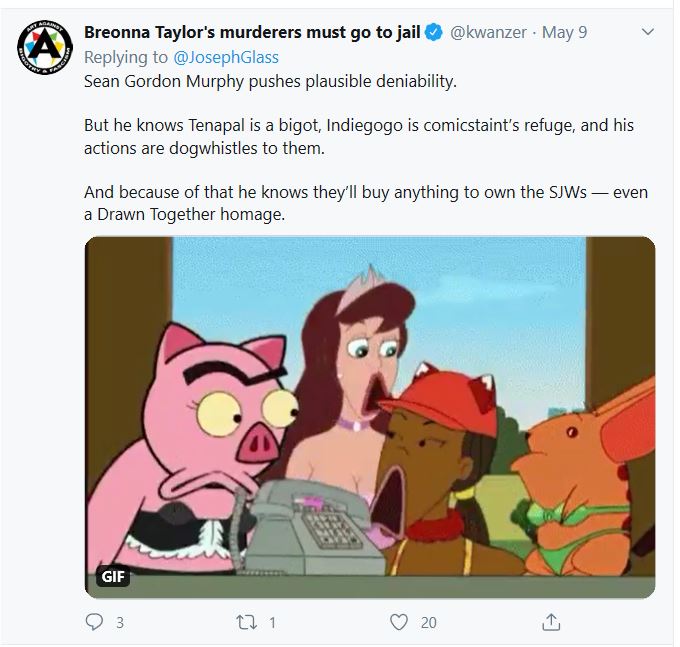 Murphy is still crowdfunding on IndieGoGo for Plot Holes. The campaign has currently earned $228,212 from 2,669 backers.

Murphy would then come under fire for a tweet in response to the looting after Black Lives Matter riots in the wake of the death of George Floyd. 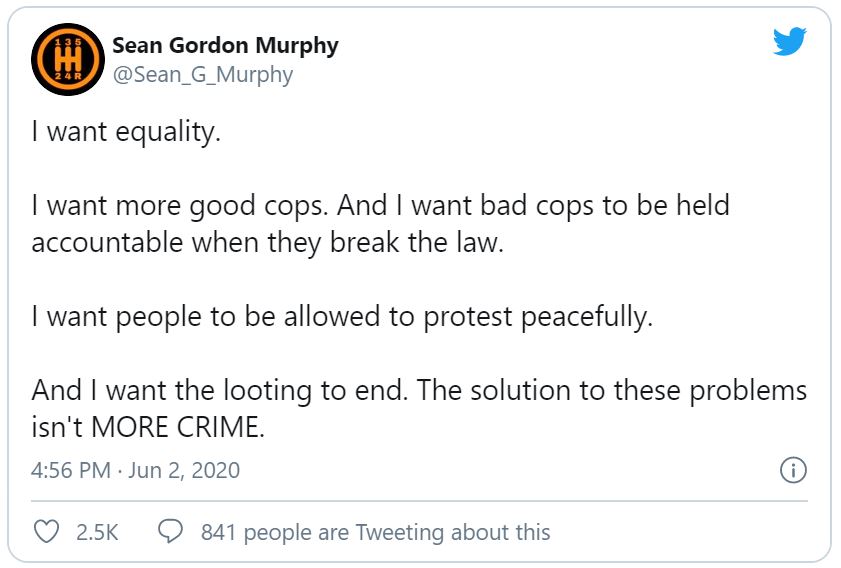 Murphy would be dragged on Twitter by a number of people including Telltale Games cinematic artist Jane Kim, Goth comic book artist Seth Adams, Dark Horse Comics’ LaGuardia artist Tana Ford, Marvel Comics writer Zac Thompson, Newsarama writer Pierce Lydon, and others for not supporting the radical Marxist group Black Lives Matter that has called for an end to the nuclear family, the dismantling of police, and the dismantling of “cisgender privilege.”

He added, “And when I heard of friends’ comic shops being broken into and saw many BLM supporters on TV imploring for the looting to stop–looters who are working against the goal of the protestors–I wanted to boost that message.” 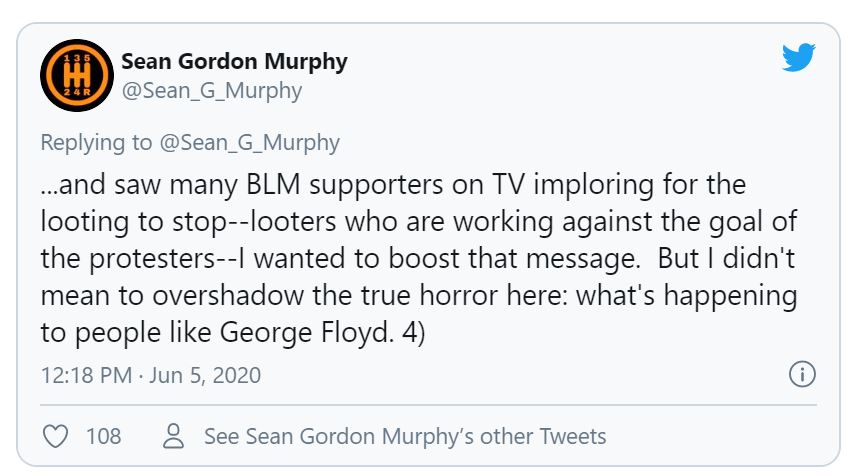 Later, Murphy would share his eBay charity for Batman: White Knight #2 page that was being auctioned off to support Black Lives Matters. 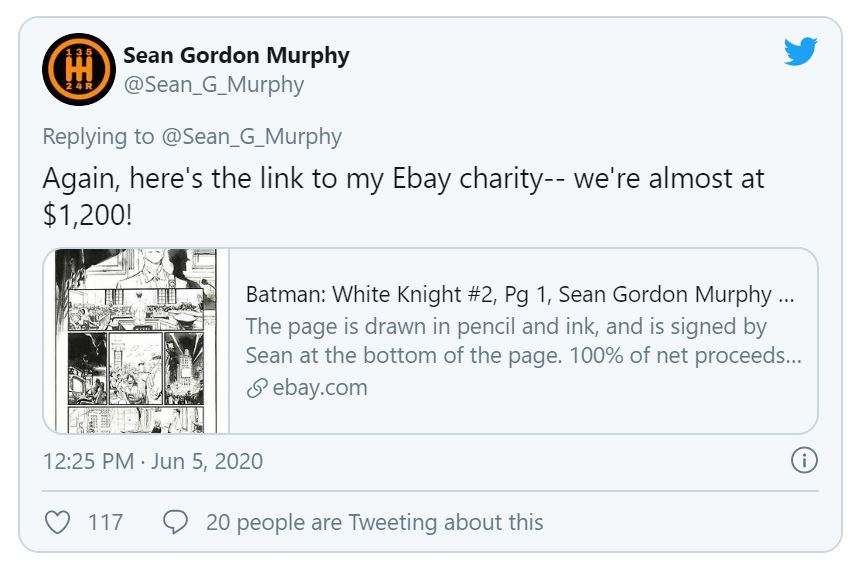 Most recently, Murphy would be accused of lovebombing by fellow DC Comics writer Magdalene Visaggio. 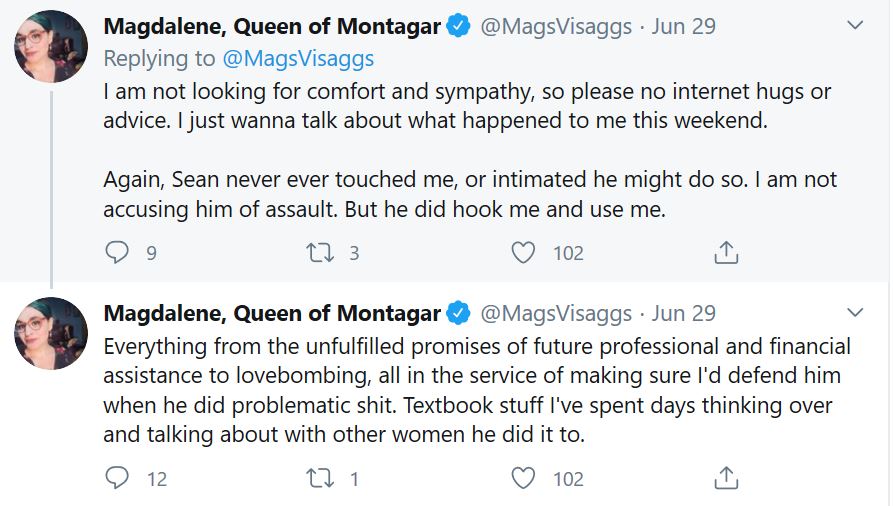