DC Comics and Batman artist Neal Adams famous for his iconic designs of Batman and Green Arrow and currently penning ‘Batman vs Ra’s Al Ghul’ recently told white people to “try not to be white in your heads.”

Adams took to Twitter where he wrote, “White brothers and sisters. Try to not be ‘white’ in your heads! Please try! You must be smarter than that!”

It’s unclear what this comment actually means and Adams doesn’t elaborate on it or explain.

These comments are the latest in what appears to be a growing pattern for Adams.

Related: Iconic Batman Artist Neal Adams: “Donald Trump Has Made Me Ashamed To Be White”

Back in March 2019 Adams wrote, “Donald Trump has made me ashamed to be white. and made me prefer to identify with whatever amount of me is otherwise.”

He added, “One day I hope to be less ashamed. Not now.” 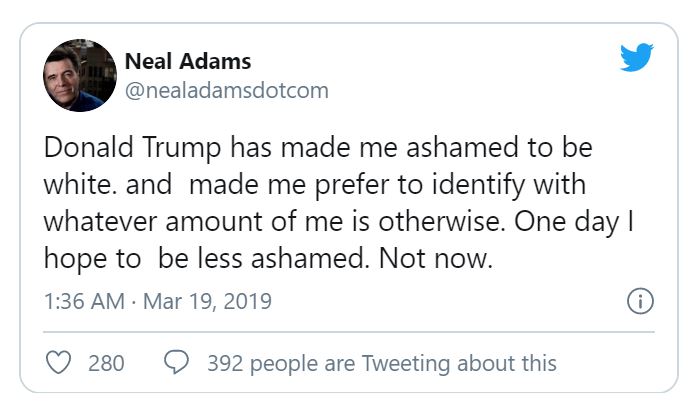 More recently, Adams has been targeting the New York Times, The Washington Post, and MSNBC as well as President Donald Trump.

On July 20th he wrote, “New York Times, you know in your heart that Do ald Trump is stupid. But he’s stupid like Hitler or a junkyard dog.”

Adams added, “He is practicing sending stormtroopers into various cities. He doesn’t want mail in votes. So who does he present as the head of the post office? And to do what?”

In a subsequent tweet he would add, “You stupid monkeys. Look at the courts. Look at the Justice Department. Trump is chewing his leg off for every possible trap you have for him, and we are too stupid to know. Don’t answer your door at night.”

On July 15th he would send a tweet to both the New York Times and The Washington Post.

He wrote, “The New York Times and The Washington Post this last weekend Donald Trump said, when questioned that Fauci made many mistakes along the way. I leapt from my chair and cried out how dare you, he never made any mistakes, he gave us science.”

He continued, “You took the science, twisted it and made MISTAKE after mistake. Fauci never made one mistake. Except to try to suppoyyour sorry a*s. And your insane ramblings.”

He then added, “Now, Navarro spoke the same words you spoke, and you say the words didn’t come from you. You sir are a many times liar. They were your words, and I heard them.”

Earlier in July he tweeted to MSNBC writing, “MSNBC, why are you media assh*les grinning like jackAss*es, while you are talking to medical people about cures and treatment.”

He continued, “How would you idiots feel if you caught the virus? And they told you you had to wait for antibodies or the vaccine? Oh but that means you could die.” 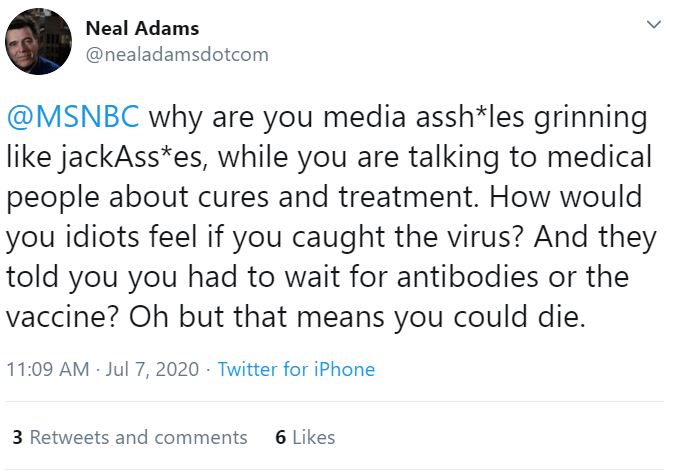 Adams continued his thread, “Tsk, tsk, tsk. You wouldn’t be smiling then would you. You’d want them to hand deliver the lastest “experimental drugs and antibodies to you. Too-fu*king day. The country’s in chaos, and the doctors are no help. Citizens, not officials would fix this in a day.” 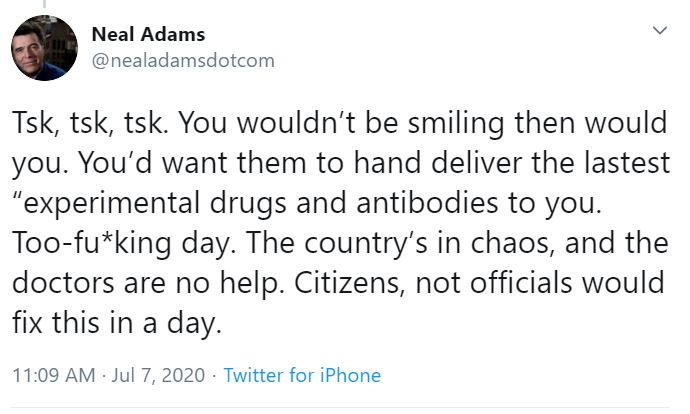 Related: The Simpsons Will No Longer Allow White Actors To Voice Non-White Roles

“But they don’t have the authority. Officials have it. Do you know how many union generals they had to go through to finally find Ulysses S Grant?. (Somebody who could do the job). Doctors have to find a new way to advance medicines now,” he then stated. 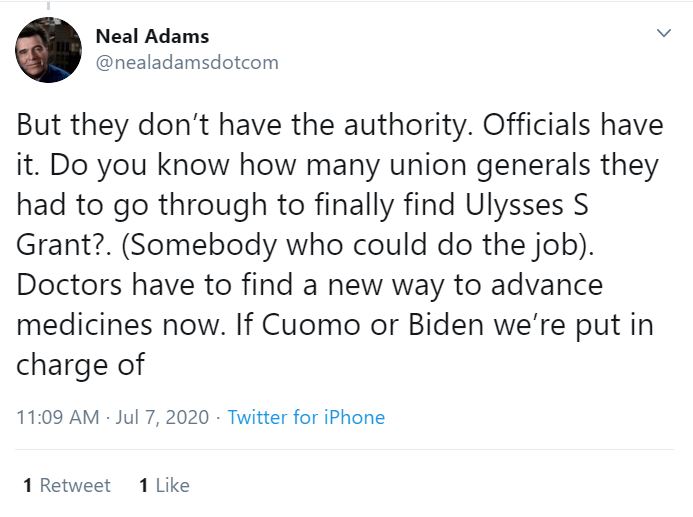 Adams wrote, “If Cuomo or Biden we’re put in charge of the country today, we would have solutions tomorrow. So instead of that, millions are infected and hundreds of thousands die. And you boobs chuckle with your medical guests. And never ask them the hard questions. Like, why the hell aren’t antibodies given to every sink person?” 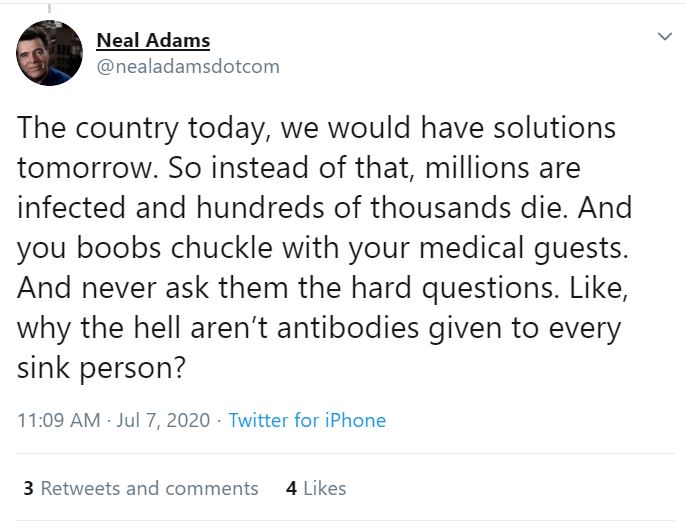 He concluded, “And why can’t you accelerate your tests? Why are we hoping that the Rock will do you’re job? Stop laughing in the face of death. We hate you for it.” 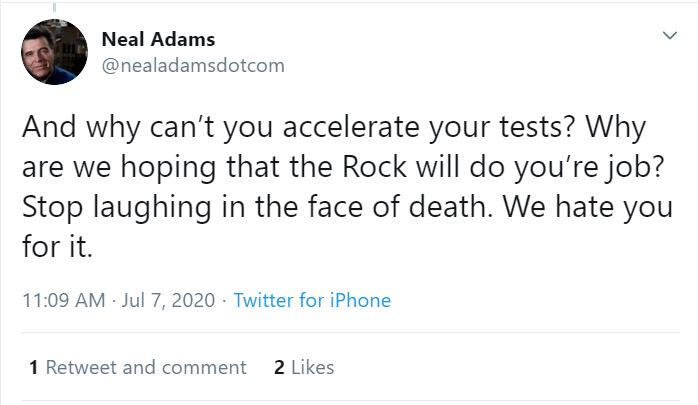 In January Adams wrote, “Donald, you saved Wollman Memorial Ice Skating Rink. Where I met my first wife, Cory. For that, I love you, and believed you were good.”

He added, “You have driven that out of me. With a sledgehammer of inhumanity. You are not an American.” 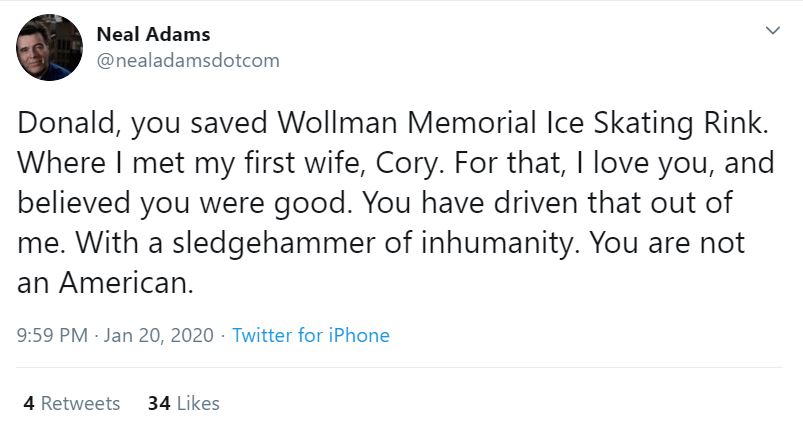 In a subsequent tweet he then wrote, “Donald, your father was wrong. He was a bigot. He made you a bigot. We are all equal.”

He then added, “White people aren’t even white people. We are all mixed, and mongral, and equal. You stopped learning and became corrupt. You must step down. Save the country.” 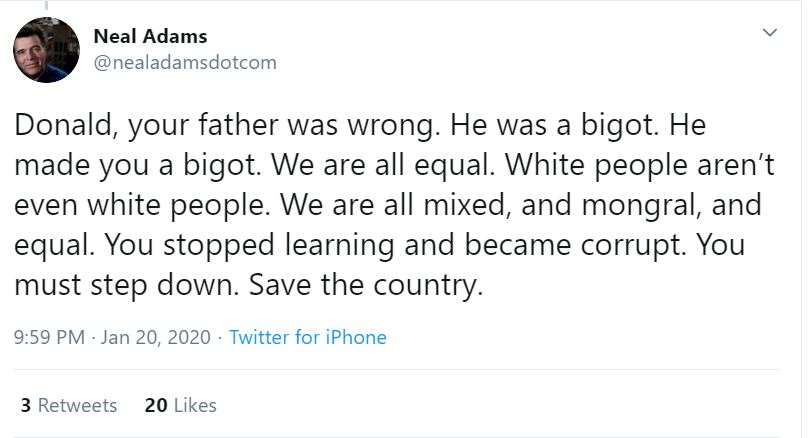 Back in October 2019, Adams would also write on Twitter, “More ugly rich white executives from major car corporations are siding with the “administration” against emission controls in California.”

“Who doesn’t expect dogs like this to support killing the people with unreasonable air, like in the old days. While they line their pockets,” he added. 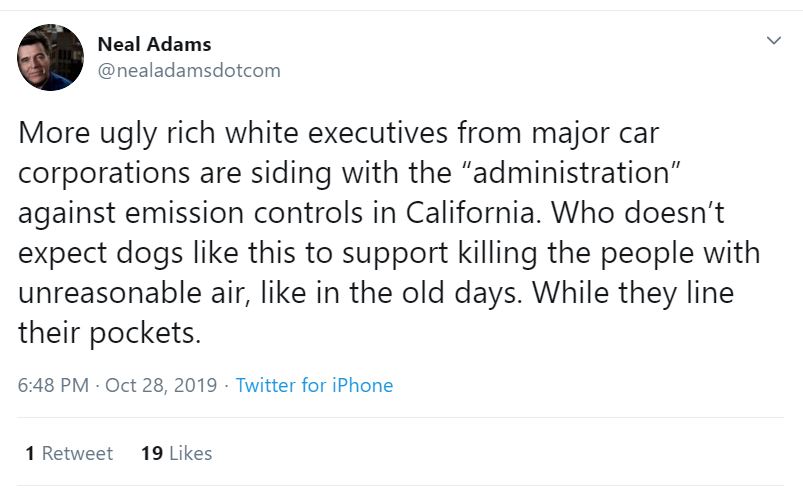 In a subequent tweet he specifically called out Toyota and General Motors, “Hey Toyota and GM, ever the scum of the earth.”

He continued, “Vote to poison the air to put more dollars in their pockets. Why are we not surprised? Are you handing out masks to your employees? Sad.” 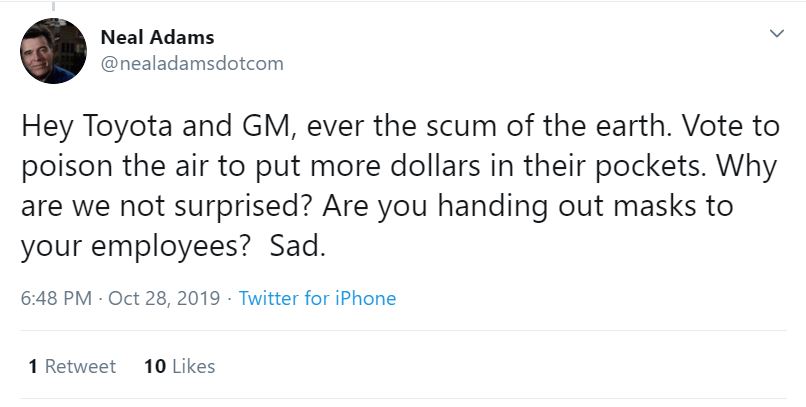 What do you make of Adams’ comments? Do they make sense to you?