After describing The Last of Us Part II’s Abby as ‘transgender,’ Korean streamer Jinnytty, aka Jinny, received a two-week suspension from Twitch, though this suspension was overturned following the posting of a public apology.

During a July 24th livestream of The Last of Us Part II Jinny, like many other players, slowly became annoyed at the forced perspective change that leads players to play as Abby for a significant portion of the game.

While playing as Abby, Jinny expressed her frustrations by stating that she “wants to see Ellie and Joel, like seriously” and noted that she did not “want to look at this transgender anymore.”

Despite pre-release assumptions based on her muscular build, Abby is not a transgender character.

According to messages obtained by esports news outlet Dexerto, shortly after the conclusion of her stream Jinny stated that she had received a “2 weeks ban for calling Abby transgender,” which Twitch stated was a “hateful comment.”

Despite an attempt to appeal, Jinny’s ban was initially upheld:

In a lengthy Twitter post following her failed appeal, Jinny would explain that she “was just not interested in Abby’s story” and did not “want to look at her anymore,” and stated that she “put it in a wrong way.”

Jinny wrote, “I received a suspension on Twitch for commenting on a character called Abby in the Last of Us 2.

In the subsequent link she would elaborate writing, “I understand taking the clip out of context it does sound really bad.”

She continued, “I was just not interested in Abby’s story during the game. I thought it was boring and exhausting so I just wanted to say I dont want to look at her anymore, but I put it in a wrong way.”

Jinny further explained that she “saw a lot of people talking about” Abby possibly being transgender, and so ”without thinking” believed “it was okay to use the word transgender to describe her.”

She would conclude her post with an apology, noting that “in the future” she “will be more educated and careful with what I say and do on stream,”, and stating that she will see her fans “after the ban.”:

She explained, “I wasn’t 100% sure if she was transgender or not and I saw a lot of people talking about it, so without thinking I thought it was okay to use the word transgender to describe her.”

“I really didn’t mean to hate on someone and I have nothing against transgender people. I sincerely apologize for anyone who got offended by it and I promise that in the future, I will be more educated and careful with what I say and do on stream,” Jinny elaborated

She concluded, “Thanks for always supporting me and watching me. I will see you after the ban.” 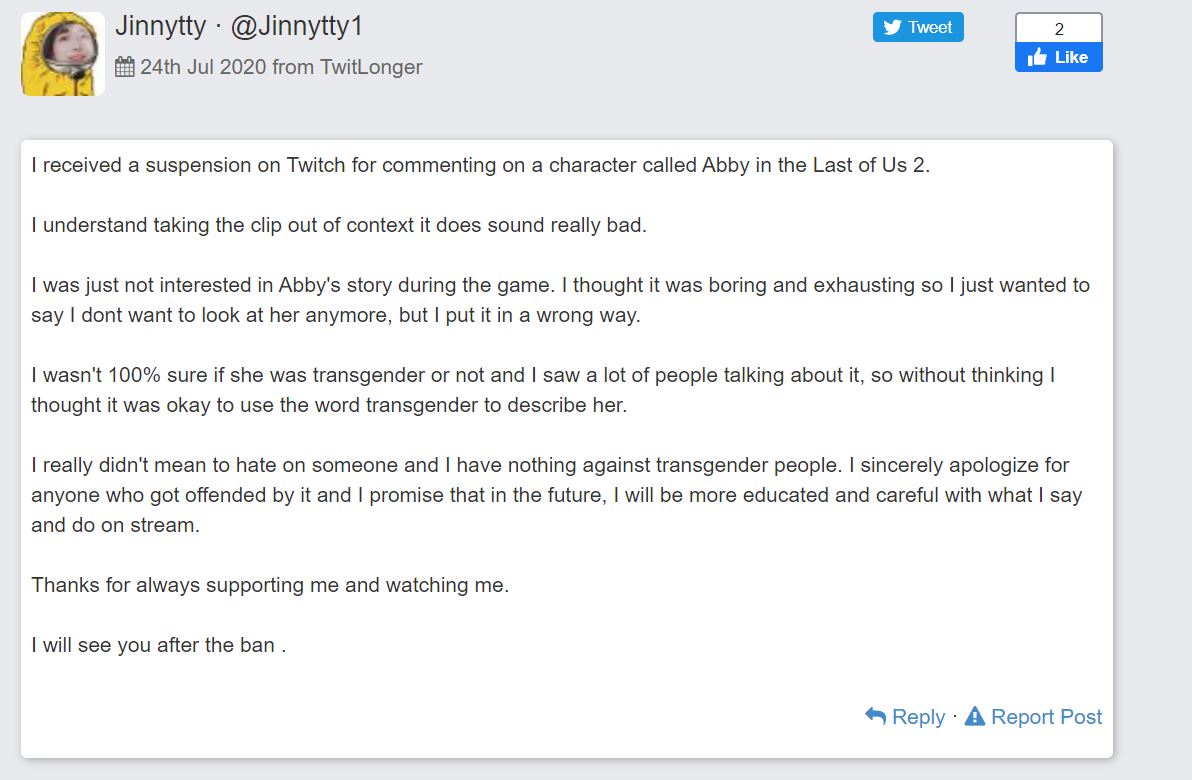 However, less than eight hours in to her suspension, Jinny’s account privileges were reinstated.

As of writing, it is unknown why Jinny’s suspension was overturned.

Twitch has yet to publicly comment on the events.