Do you like references? Star Treks: Lower Decks sure hopes you do, as this week’s episode presents an unwarranted and forced walk down memory lane.

At the start of Veritas, the Lower Decks crew find themselves abruptly and confusingly imprisoned on a planet belonging to the alien species known as the Primes. When their captors eventually come to retrieve them, the four are taken to what appears to be a giant alien court room and discover the senior staff of the USS Cerritos suspended in a beam of white light.

Upon their entrance into the room, a member of the Prime named Clar informs Mariner, Tendi, Rutherford, and Boimler that they must offer testimony regarding the actions of the senior staff on a particular star date. 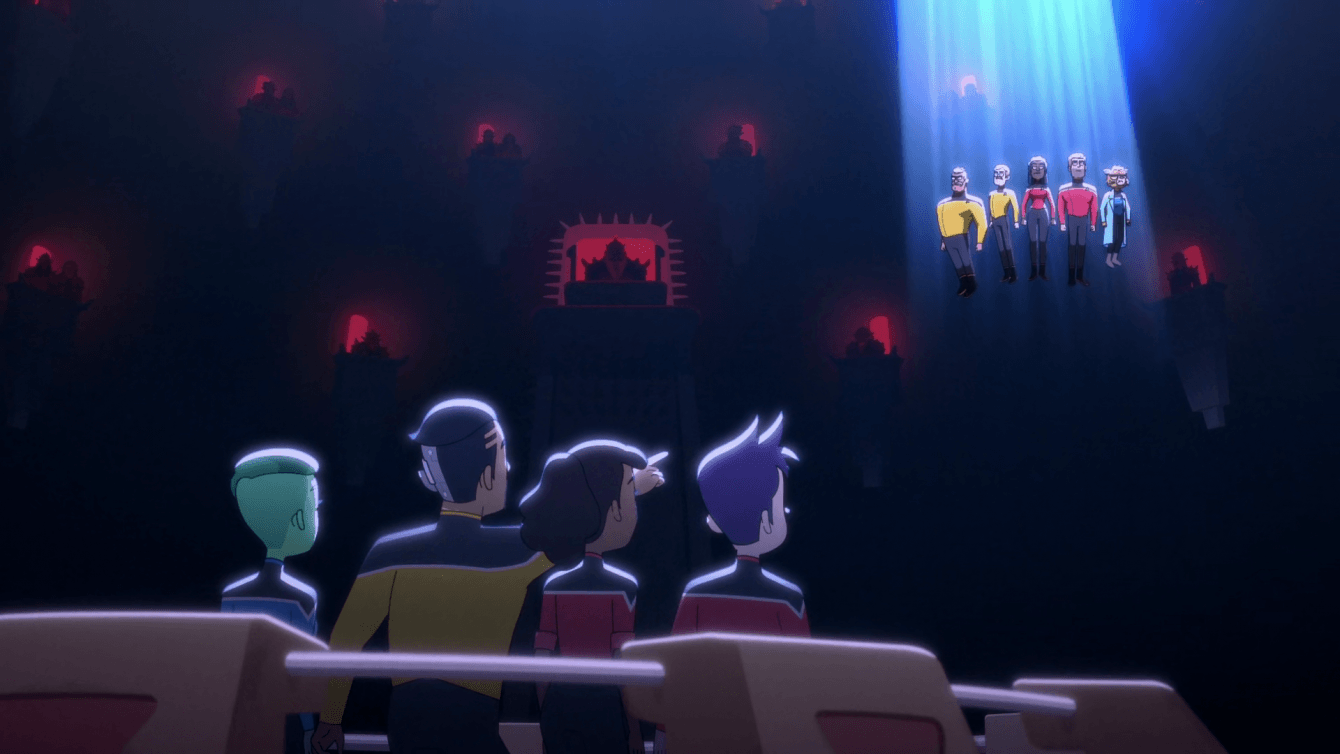 Confused and worried over the circumstances their commanding officers have found themselves in, the four begin to individually recall their experiences on the day in question. Boimler and Mariner reveal that their late arrival to their posts resulted in a conflict with an alien species, which in turn eventually led to Rutherford and Tendi being assigned to two separate covert ops missions alongside members of the Bridge Crew.

Rutherford and Tendi explain that they were only able to complete their respective goals due to their personal action-movie-style heroics, much to Clar’s disbelief. 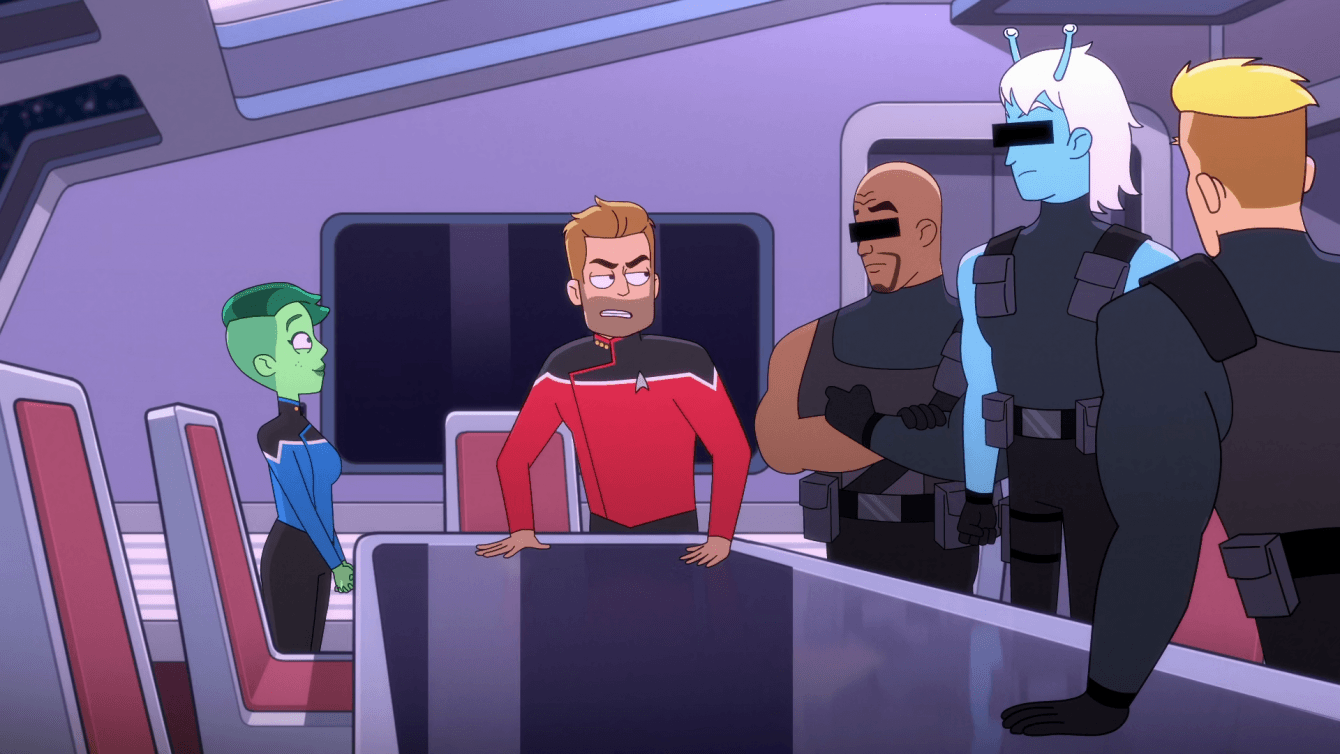 As the stories from the crew of the Cerritos begin to pile up, Clar stops the proceedings. Taking note of their confusion, Clar explains to the team that they are not participating in the trial, but rather a ceremony celebrating his rescue by the Cerritos.

After the misunderstanding is cleared up (and Clar’s celebration is unfortunately ruined), the crew returns to the Cerritos, where Freeman commends them for their defense of Star Fleet before ushering them off the bridge for asking questions about the episode’s many plot holes. 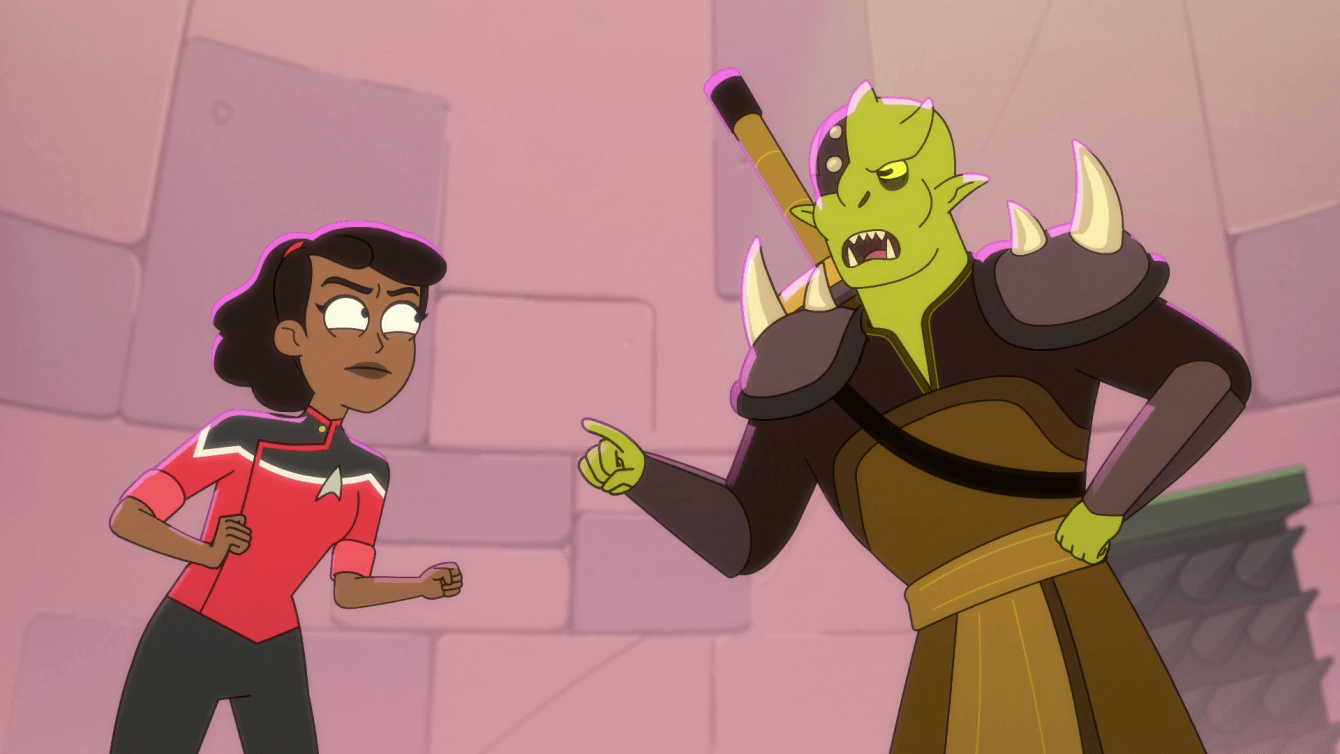 Trial episodes have long been a staple of the Star Trek franchise, with “Rules of Engagement” and “The Menagerie” being among some of the fanbase’s most beloved episodes largely due to their intricate and philosophical explorations of morality and legality (Additionally, Star Trek VI: The Undiscovered Country provided the visual inspiration for the episode’s court room).

Yet, Lower Decks’ attempt at a courtroom episode lacks this particular mystique, as while the settings and rules of the trial feel very appropriate in the universe of the franchise, the fact that no one is informed on the topic being discussed or even the true nature of the gathering leads the audience to be just as confused about the whole ordeal as the crew.

While the presentation of the story as a series of recollections is a classic and enjoyable framing device, it fails to stick its atmospheric landing due to its chaotic nature and subversive attempts at humor (if the Bridge Crew could freely speak while suspended in the light, why did they just not inform their team that the event was a peaceful one?). 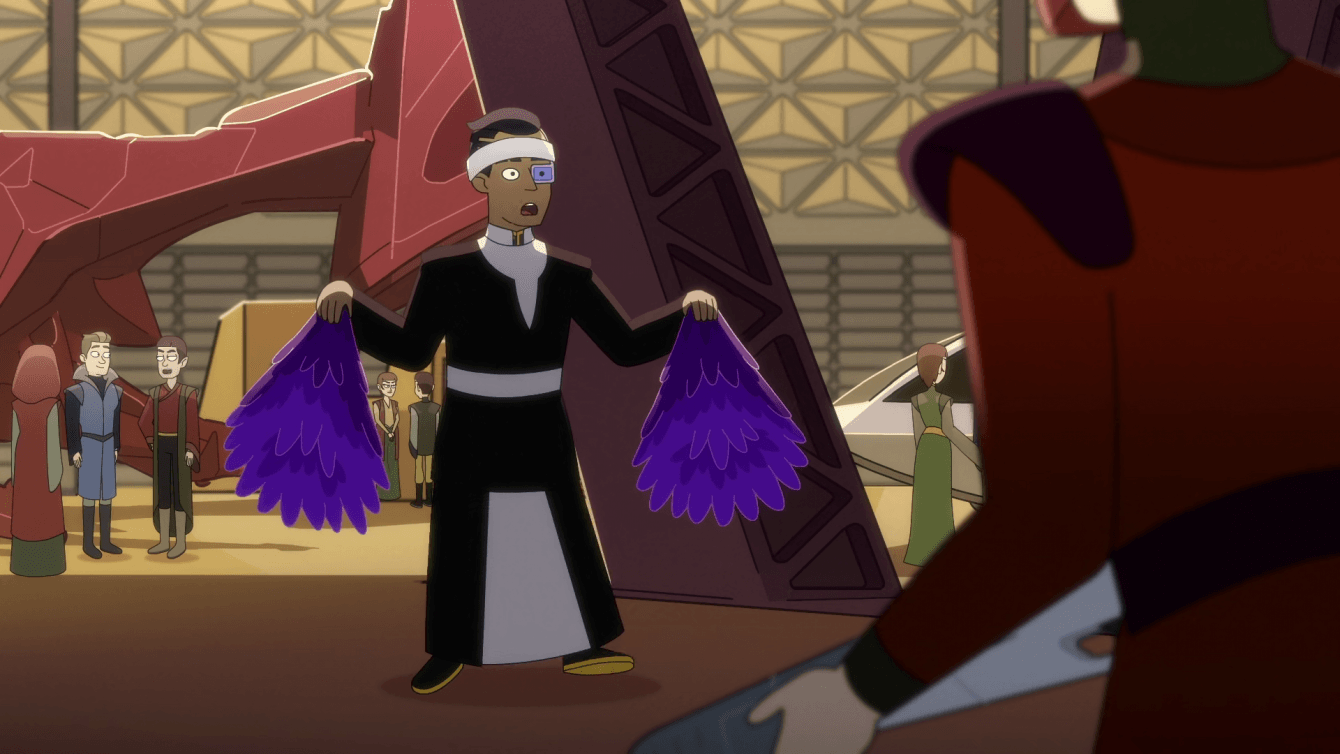 Veritas also suffers greatly from the series’ most glaring weakness: it’s over reliance on references to previous Star Trek lore as a source of humor.

Throughout the episode, the crew argue over their opinions of Roga Danar and Khan, Rutherford performs a version of Uhura’s fan dance during his secret mission, and Tendi’s black ops team uses a Romulan Warbird to infiltrate their objective.

These nods contribute little to the actual events of the episode itself and serve only to make certain fans light up at the mere mention of other Star Trek media. 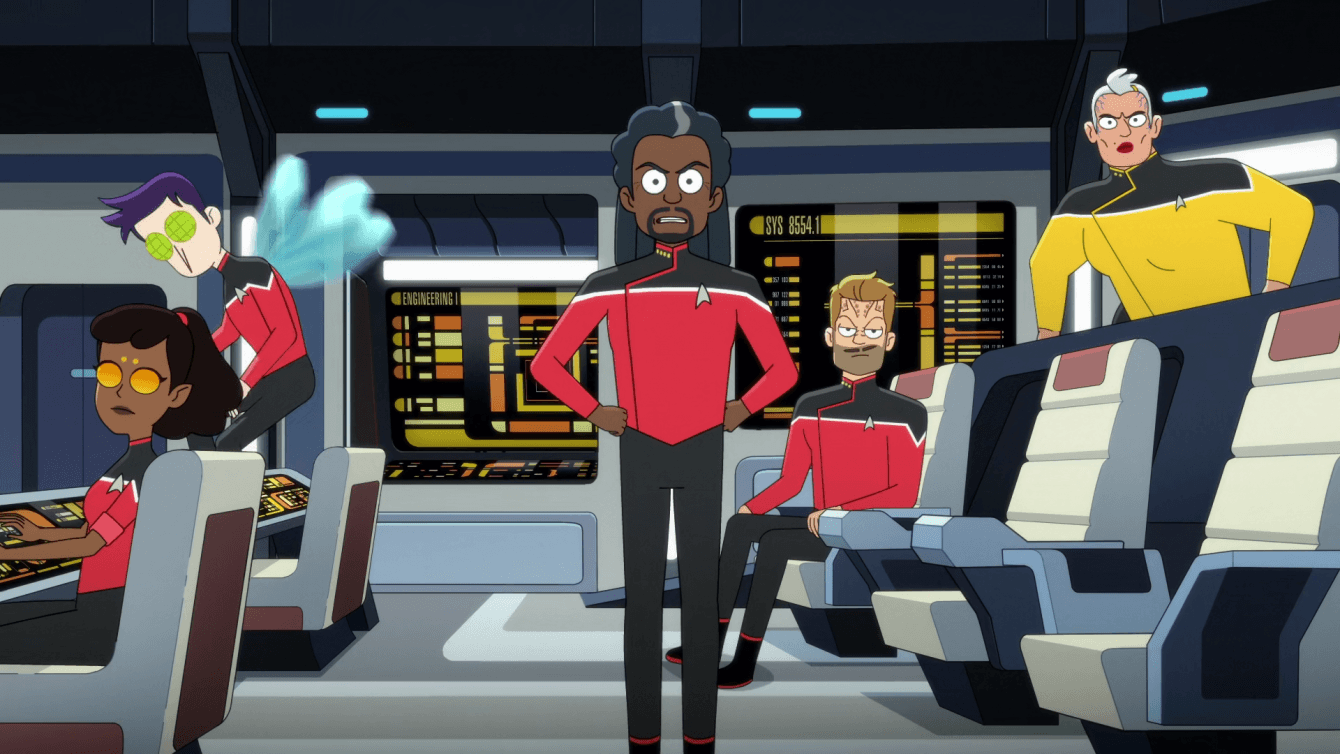 However, the most egregious of these references is undoubtedly the appearance of Q, thankfully and welcomingly voiced by original actor John de Lancie. His role is brief, appearing only during one of Mariner’s flashbacks and as the final gag of the episode, and his presence is only used as a vehicle to parody the god-like being’s eccentric obsession with testing members of humanity.

As a result, Q is reduced to nothing more than a minor annoyance to the Cerritos and is left feeling more like a vehicle for ‘random’ humor than any particular life-threatening challenge or moral quandry. 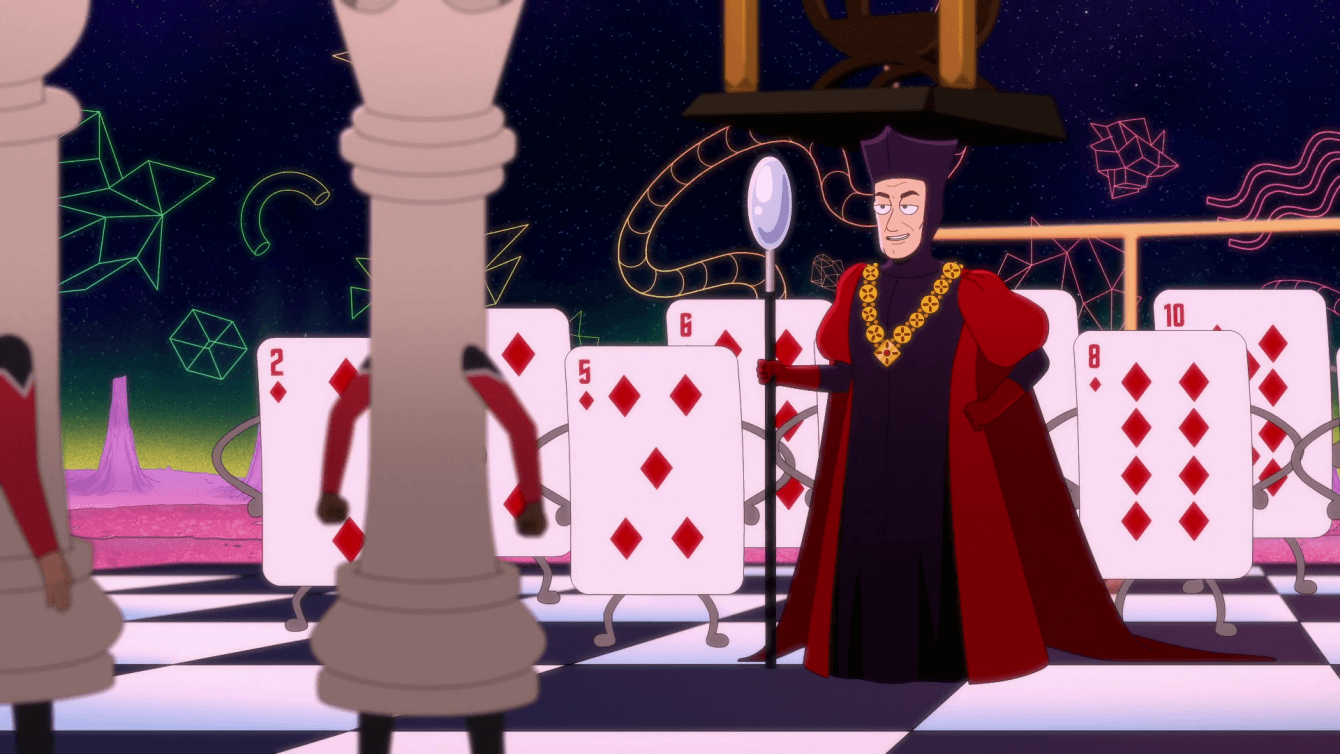 For all it’s flaws, Veritas does present audiences with one upside. The series continues to remain rather well animated and directed, with scenes such as Tendi’s fight against a group of Romulans or the gathering of Romulan warships around her team standing out as particular highlights of the show’s visual quality.

Unfortunately, the effort put into the production of the series is failed by the show’s Rick-and-Morty-esque art style, which promotes a sense of low-effort, by-the-books adult animation rather than one of adventure, excitement, or sincerity. 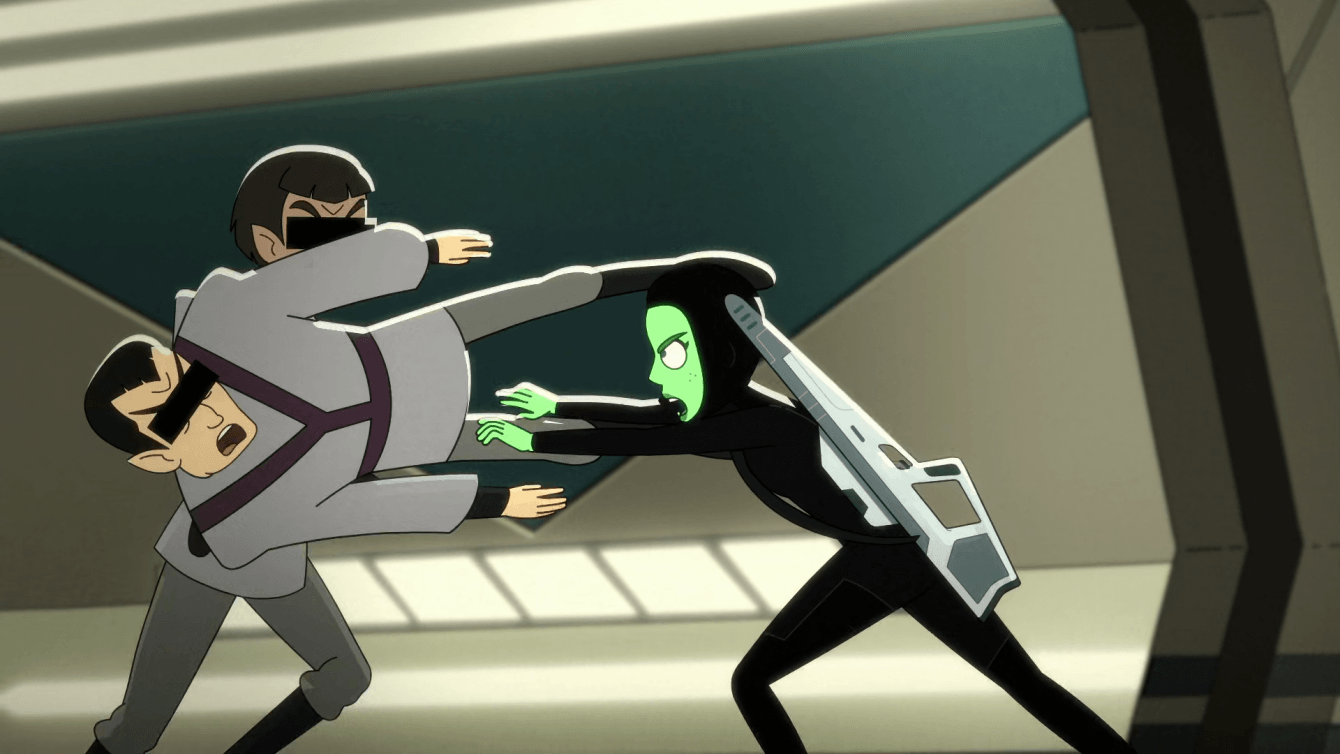 Overall, Veritas is a disappointing follow up to the improvement in quality seen in Much Ado About Boimler, as the series appears to fall back on its lazy and predictable ways. The constant references, including the appearance of Q, are a display of the series’ inability to develop its own identity, as it continues to rely on the accolades of past series to endear itself to its audience. Q fans may be excited for the few seconds he appears on screen, but for the rest of Star Trek’s fanbase, this episode does nothing more than dash any hope that the series’ writing will improve within the season’s last two episodes.