YongYea took to Twitter where he wrote, “Fuck Donald Trump. What a shameful and disgraceful display he turned this debate into, from the complete lack of decorum, the incessant lies, to him telling white supremacists to “stand by” rather than condemning them.”

He added, “Fuck him and what he’s turned this country into.” 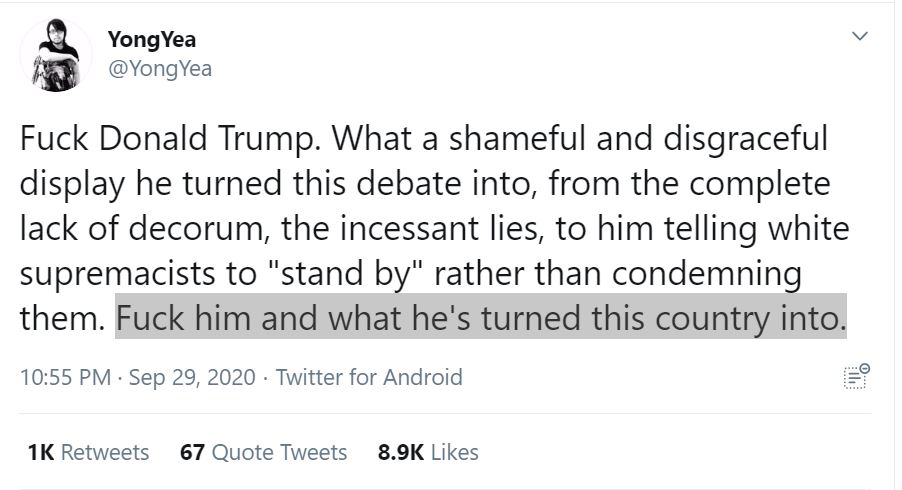 YongYea would take it a step further and tell people advising him to stick to video games to “go f*** yourself.”

The YouTuber wrote, “To the few telling me to “stay in my lane”, sincerely go fuck yourself. Humans aren’t defined by their jobs.”

“Gaming news & voice acting are my profession, but this election is my life in the country I now call home. This election is more in my lane than video games will ever be,” he added. 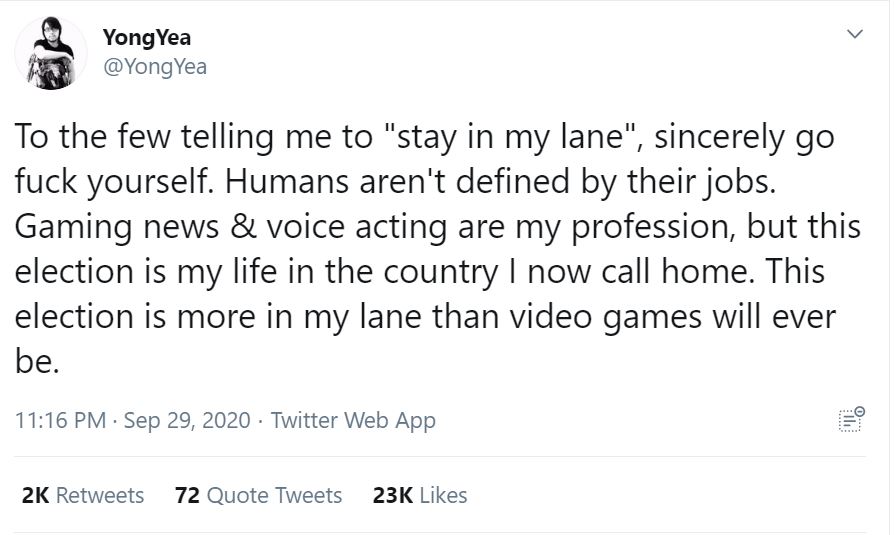 He would then respond to individuals claiming his outspoken attack on President Trump was him trying to make a living as a voice actor in Los Angeles.

YongYea wrote, “What a moronic conspiracy theory. Moving to LA and voice acting never have & never will change my values.”

He continued, “Everything I believed 1.5 yrs ago I still believe now. Wanting the president to have some semblance of human decency is not a radical idea, it’s the basic requirement.” 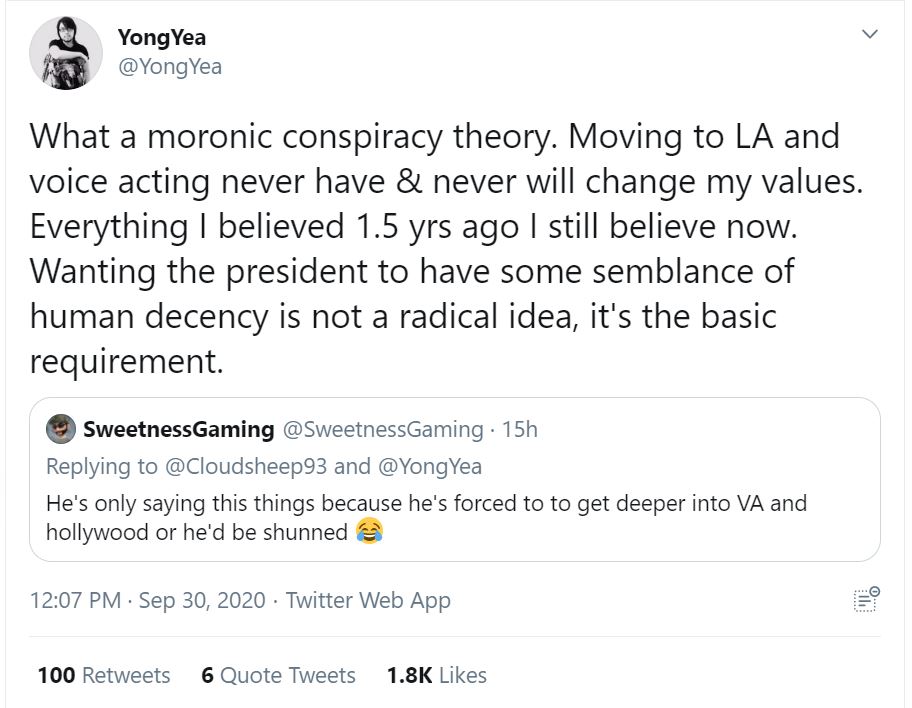 YongYea previously went after President Donald Trump back in June, where he accused the President of attacking peaceful protestors for a photo-op.

He wrote, “Trump wasn’t being blocked from leaving his home, he attacked peaceful protestors in a public area, violating their first amendment RIGHT to peaceful protest for a damn photo-op.”

He went on to state, “The president doesn’t get to decide to violate one’s first amendment right to peaceful protest whenever he feels like taking a photo. Protests at the church were peaceful until Trump showed up with the police who initiated violently. For a photo. What kind of leader does that?” 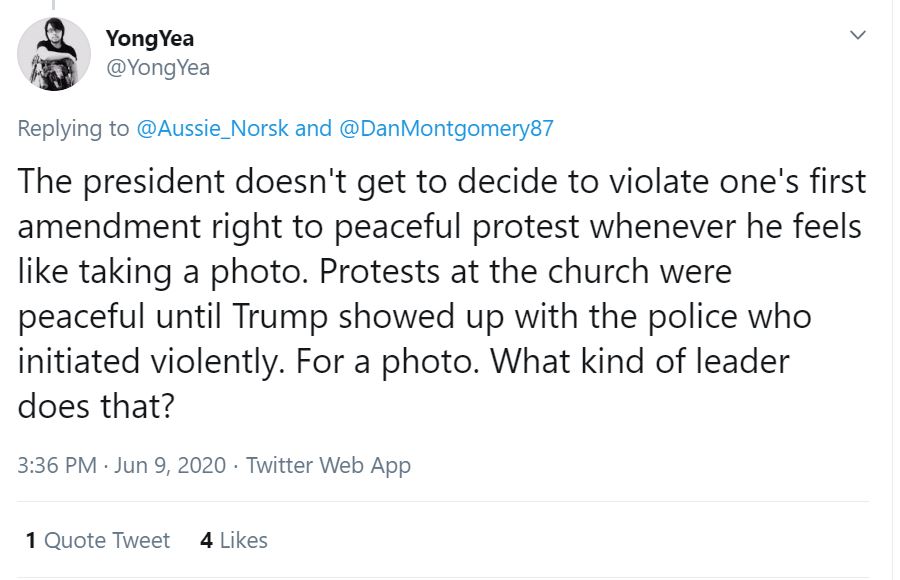 Monahan stated, “The United States Park Police (USPP) is committed to the peaceful expression of First Amendment rights. However, this past weekend’s demonstrations at Lafayette Park and across the National Mall included activities that were not part of a peaceful protest, which resulted in injuries to USPP officers in the line of duty, the destruction of public property and the defacing of memorials and monuments.”

“During four days of demonstrations, 51 members of the USPP were injured; of those, 11 were transported to the hospital and released and three were admitted,” he continued.

The statement added, “Multiple agencies assisted the USPP in responding to and quelling the acts of destruction and violence over the course of the weekend in order to protect citizens and property.”

Monahan then specifically addressed the actions YongYea refers to on June 1. He stated, “On Monday, June 1, the USPP worked with the United States Secret Service to have temporary fencing installed inside Lafayette Park. At approximately 6:33 pm, violent protestors on H Street NW began throwing projectiles including bricks, frozen water bottles and caustic liquids.”

“The protestors also climbed onto a historic building at the north end of Lafayette Park that was destroyed by arson days prior. Intelligence had revealed calls for violence against the police, and officers found caches of glass bottles, baseball bats and metal poles hidden along the street,” he elaborated.

Monahan then stated, “To curtail the violence that was underway, the USPP, following established policy, issued three warnings over a loudspeaker to alert demonstrators on H Street to evacuate the area.”

He then went on to detail how law enforcement dealt with officers, “Horse mounted patrol, Civil Disturbance Units and additional personnel were used to clear the area. As many of the protestors became more combative, continued to throw projectiles, and attempted to grab officers’ weapons, officers then employed the use of smoke canisters and pepper balls.”

Monahan also denied that tear gas was used, “No tear gas was used by USPP officers or other assisting law enforcement partners to close the area at Lafayette Park. Subsequently, the fence was installed.”

Finally, he concluded, “Throughout the demonstrations, the USPP has not made any arrests. The USPP will always support peaceful assembly but cannot tolerate violence to citizens or officers or damage to our nation’s resources that we are entrusted to protect.”

President Trump reacted to the police breaking up the protests on Twitter writing, “D.C. had no problems last night. Many arrests. Great job done by all. Overwhelming force. Domination. Likewise, Minneapolis was great (thank you President Trump!).”

More recently in September YongYea wrote, “Admonishing the Trump presidency to the fullest extent is no longer about politics, it’s not about right or left, it’s about integrity and survival.”

He added, “If you think it upsets me how some CEOs run game companies, I’m livid about how this oaf of a president is running this country.” 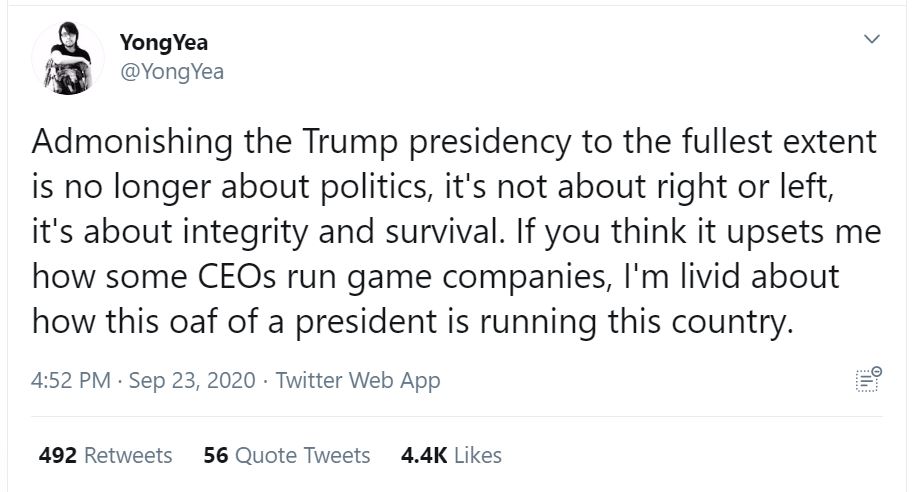 What do you make of YongYea’s attack on President Donald Trump? Will this effect whether you continue to watch his video game commentary?