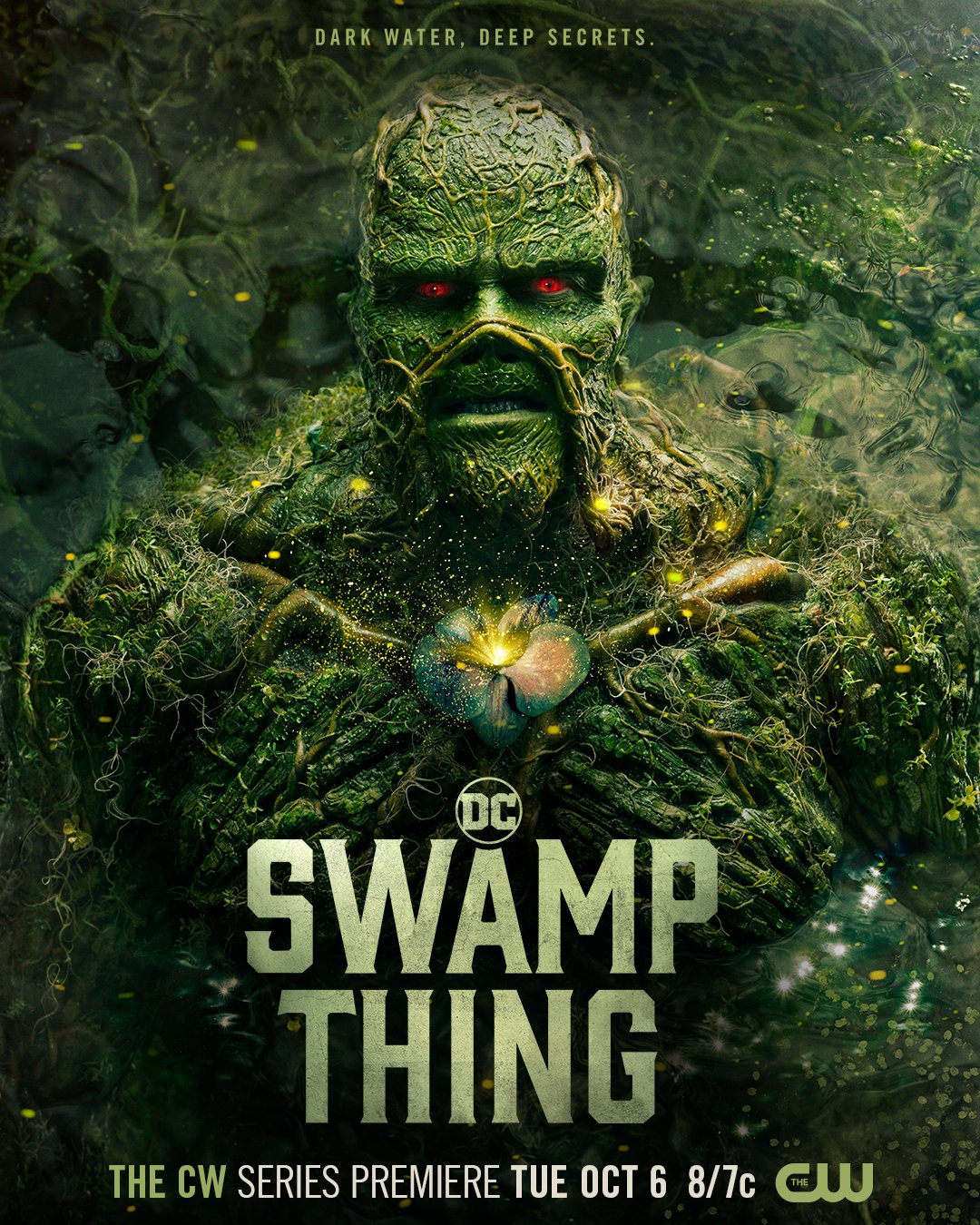 As reported by Newsweek, the “billboard sits atop the Whisky a Go Go nightclub, and it used to advertise Swamp Thing.” The nightclub is located on Sunset Boulevard in Hollywood.

As you can see in the photos shared to Twitter by user @Spuddy92098782 the billboard has been transformed to show Joe Biden as the DC Comics character.

The street artists also added some words to the billboard. It now reads, “Joe Biden is Swamp Thing. Hide your kids, hide your wife.” 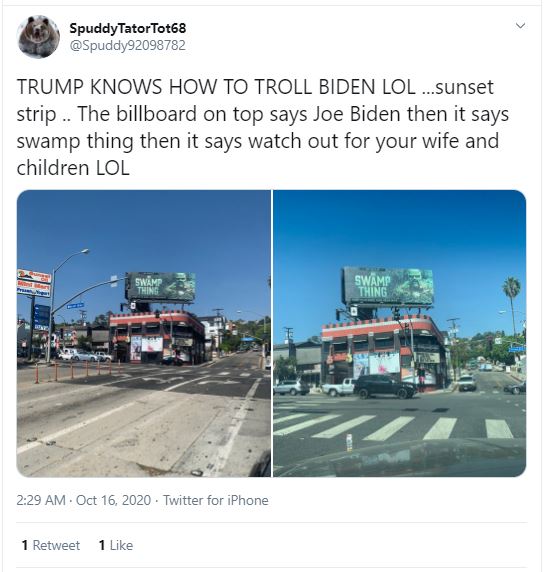 Here’s a better look at the billboard. 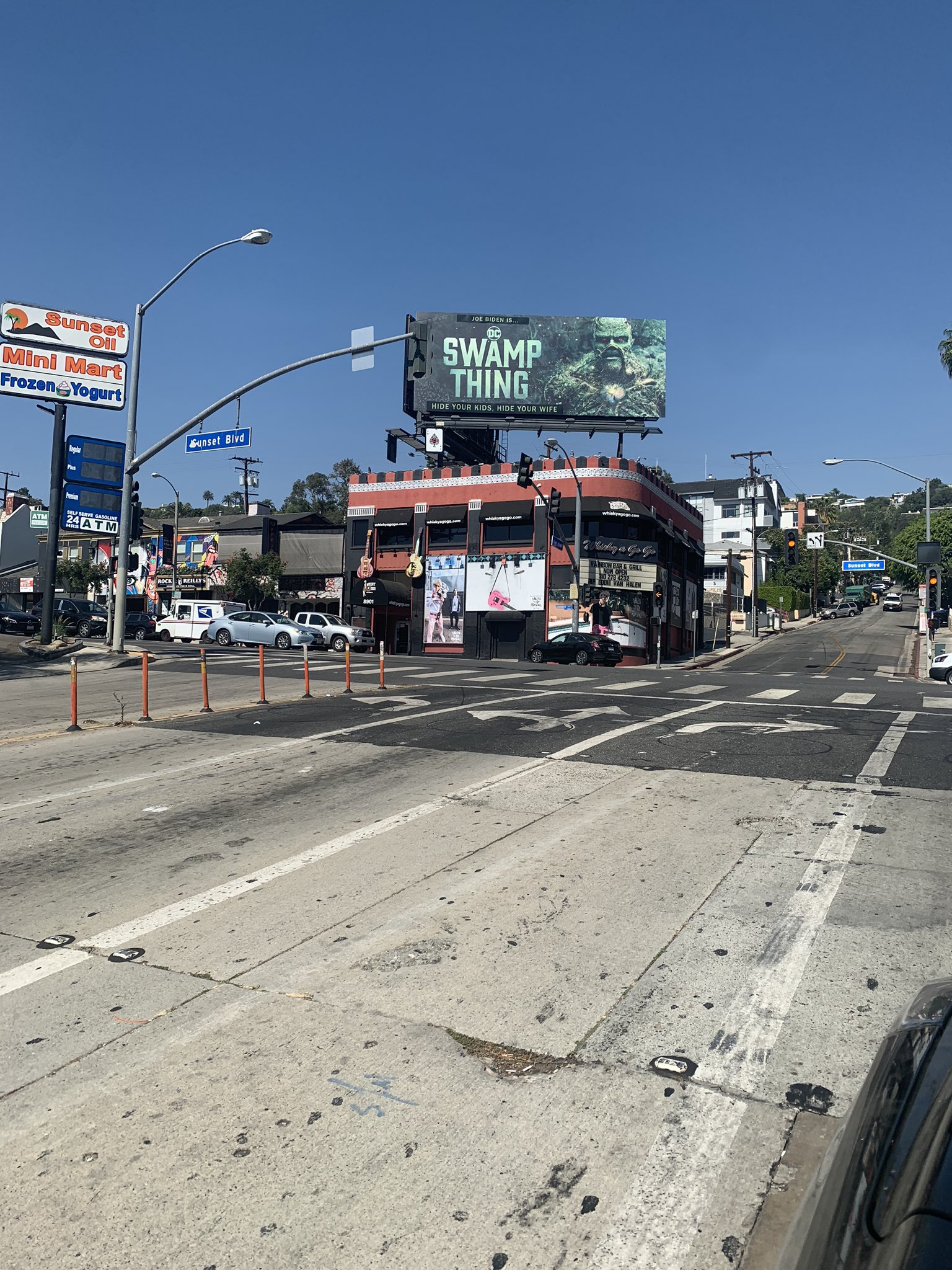 And here’s one where they are a little closer. 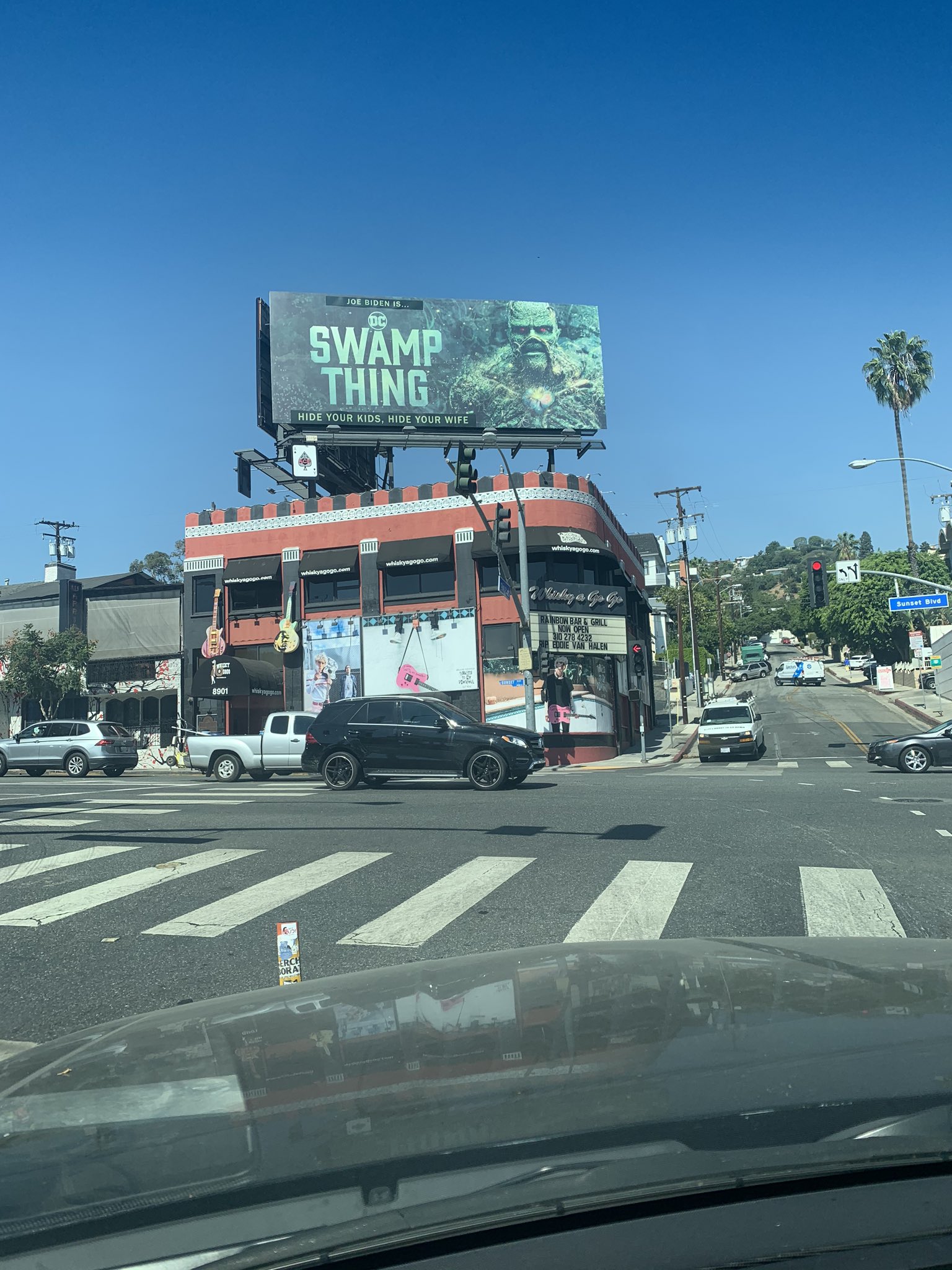 President Donald Trump’s son Donald Trump Jr. reacted to the billboard on Twitter where he wrote, “Joe Biden spent 47 years in Washington, DC enriching his family, exporting the jobs of American workers overseas and selling our country out to the Chinese Communists.”

He added, “There is no bigger swamp thing in American political history than Joe Biden!!!” 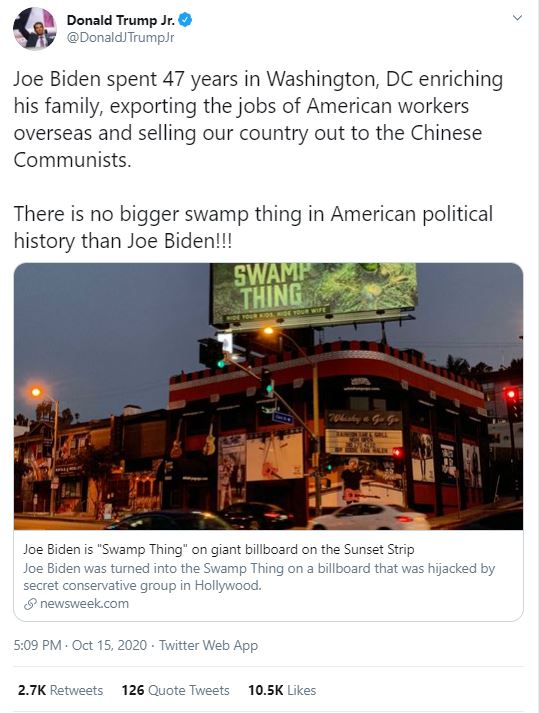 Artists are no strangers to depicting politicians as superheroes or supervillains. 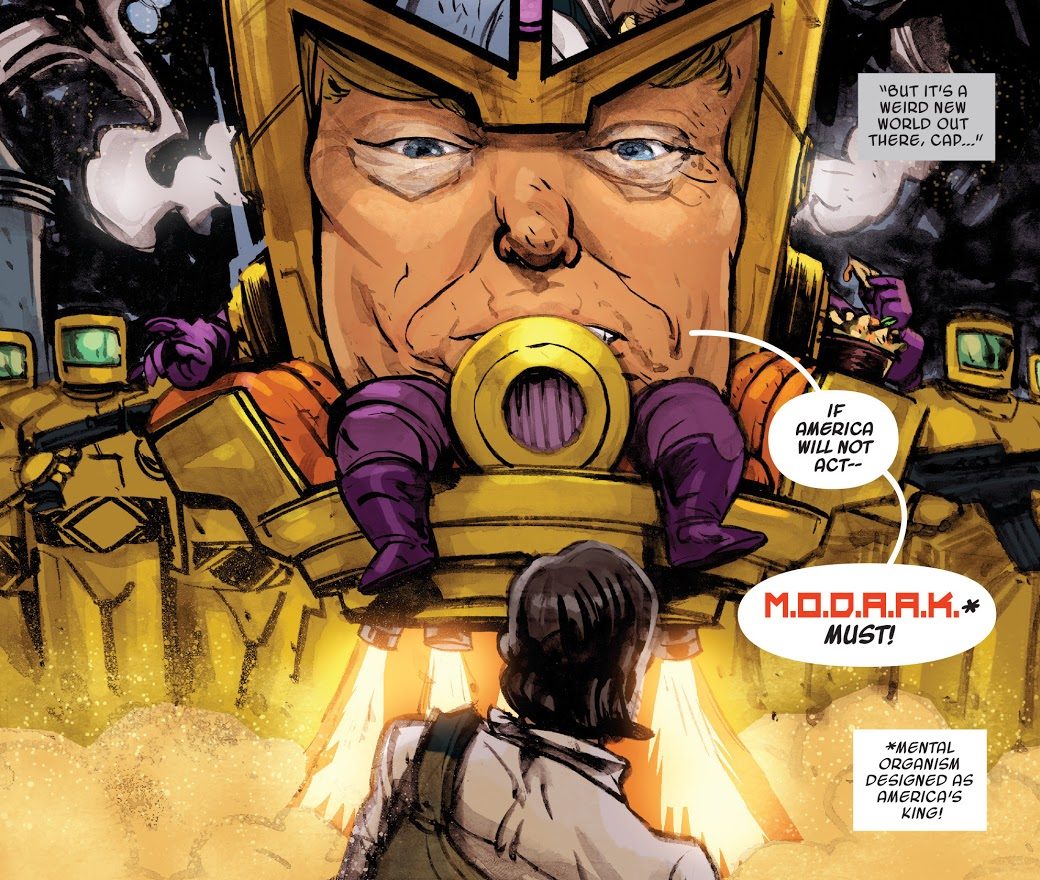 President Trump has also been depicted as Superman and Marvel Comics villain Thanos.

The YouTube channel Mad Liberals superimposed President Trump’s head over Superman, played by Christopher Reeve in a clip from Superman 2 where he defeats General Zod.

Trump’s depiction as Thanos came from the official Trump War Room Twitter account that declared, “House Democrats can push their impeachment all they want. President Trump’s re-election is inevitable.”

The video shows Trump as Thanos saying, “I am inevitable.” He then snaps his fingers and you see a number of Democrat politicians including Nancy Pelosi and Maxine Waters being snapped out of existence.

House Democrats can push their sham impeachment all they want.

Mark Pelligrini, Timothy Lim, and Brett R. Smith also used President Donald Trump’s likeness as an inspiration for their hero Wall-Might, a spoof on My Hero Academia’s All Might.

The character is seen in their My Hero Magademia book and the follow-up Wall-Might First Term Part II. 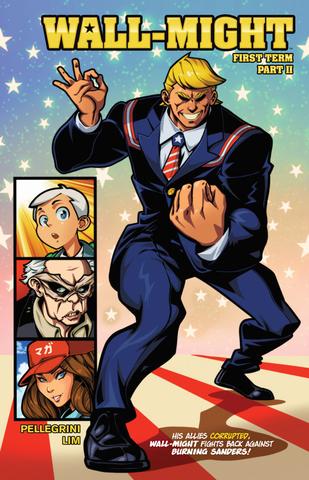 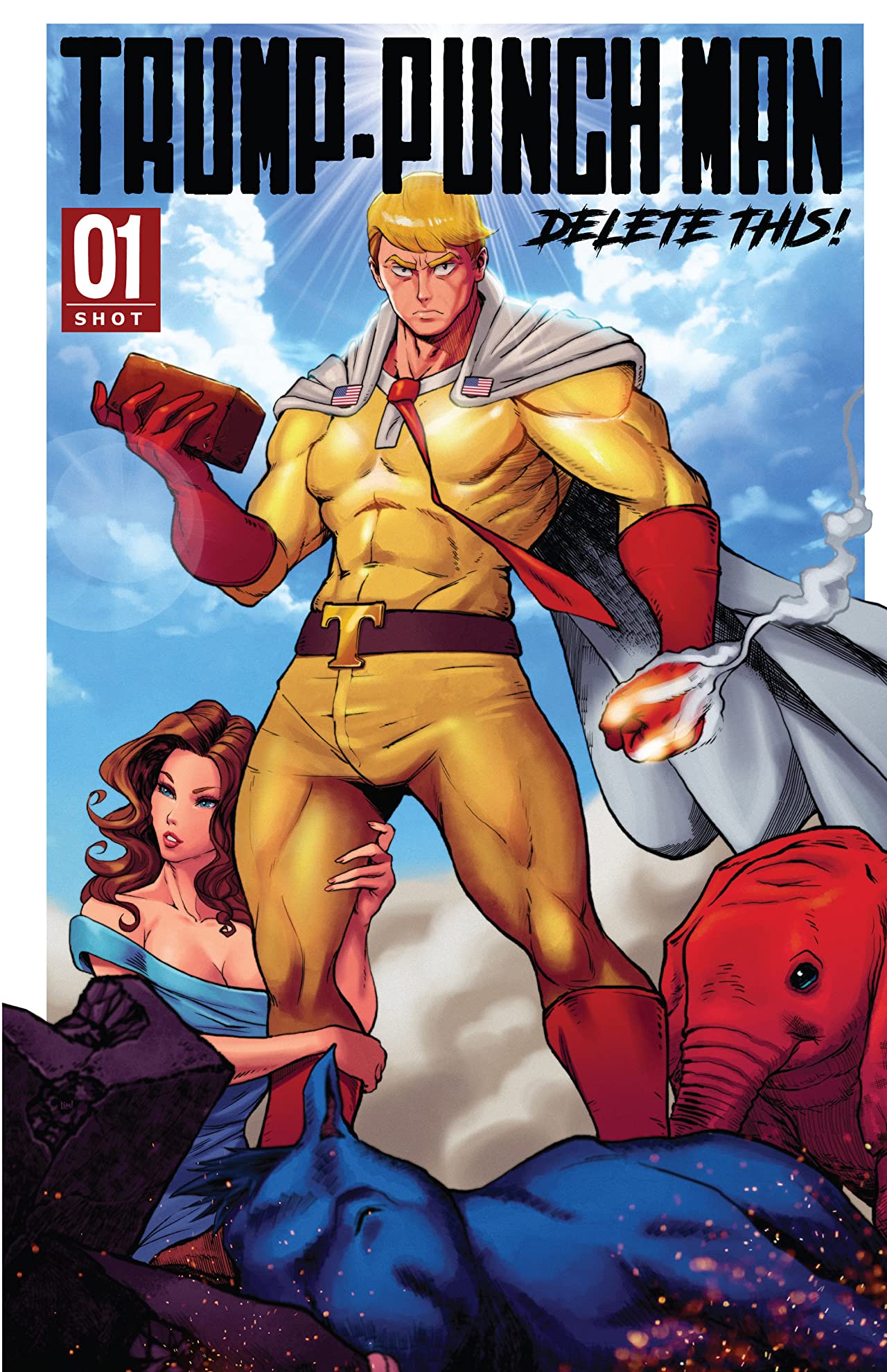 Devil’s Due Comics would also show Congresswoman Alexandria Ocaso-Cortez as Wonder Woman in a variant cover by Tim Seeley and Josh Blaylock for their Alexandria Ocasio-Cortez and the Freshman Force: New Party, Who Dis? comic. 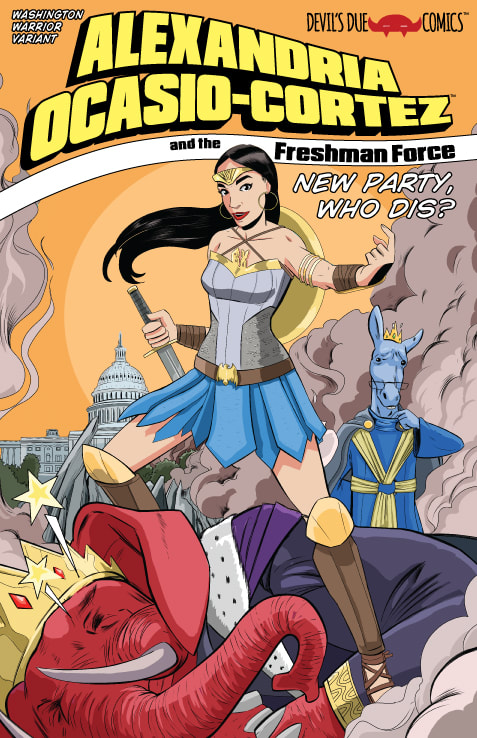 Devil’s Due Comics also imagined Bernie Sanders as He-Man in a variant cover by Josh Blaylock. 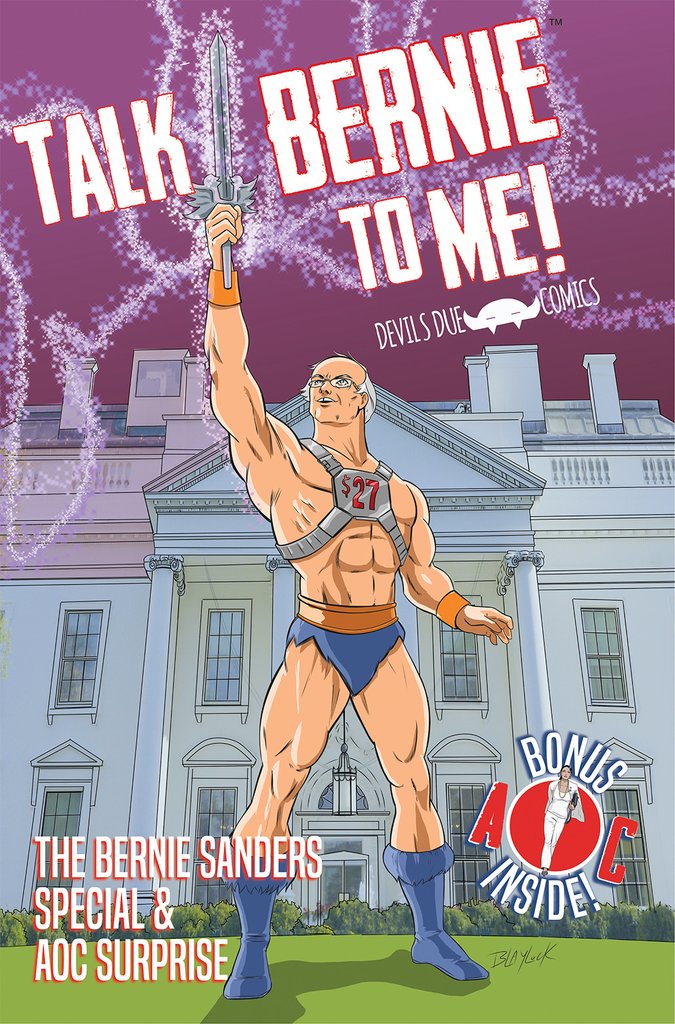 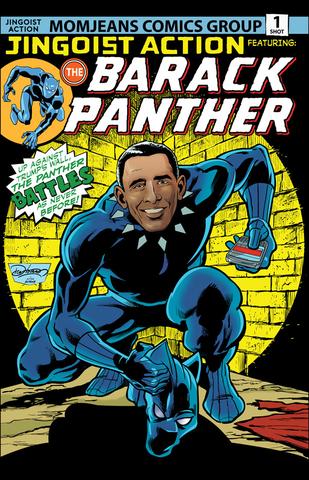 What do you make of these artists turning Joe Biden into DC Comics’ Swamp Thing?