Update: After the initial publication of this article, Funimation informed Anime News Network that “voice actor Chris Thurman will no longer be engaged by the dub producer for any current or future productions.”

The original article continues below.

Chris Thurman, a Funimation voice actor who has provided additional voices in numerous anime productions, has admitted to sending unsolicited sexual photographs of himself to an underage fan after said fan publicly accused him of the criminal act on social media. 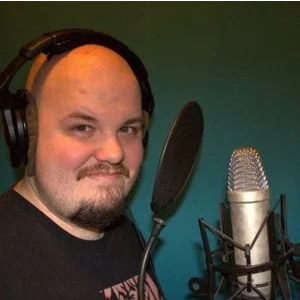 The accusation was first levelled against Thurman on October 18th, when an anonymous account by the handle of ‘Exposing Chris Thurman’ published a Twitlonger post that claimed the voice actor “is also known on the side as an “accidental” serial dick pic sender, sending pics of his dick to unsuspecting girls.”

According to screenshots of a conversation between Thurman and one of the fans in question, Thurman initially claimed that he “did not mean” to send the picture and attempted to clarify that the act “was not intentional.” 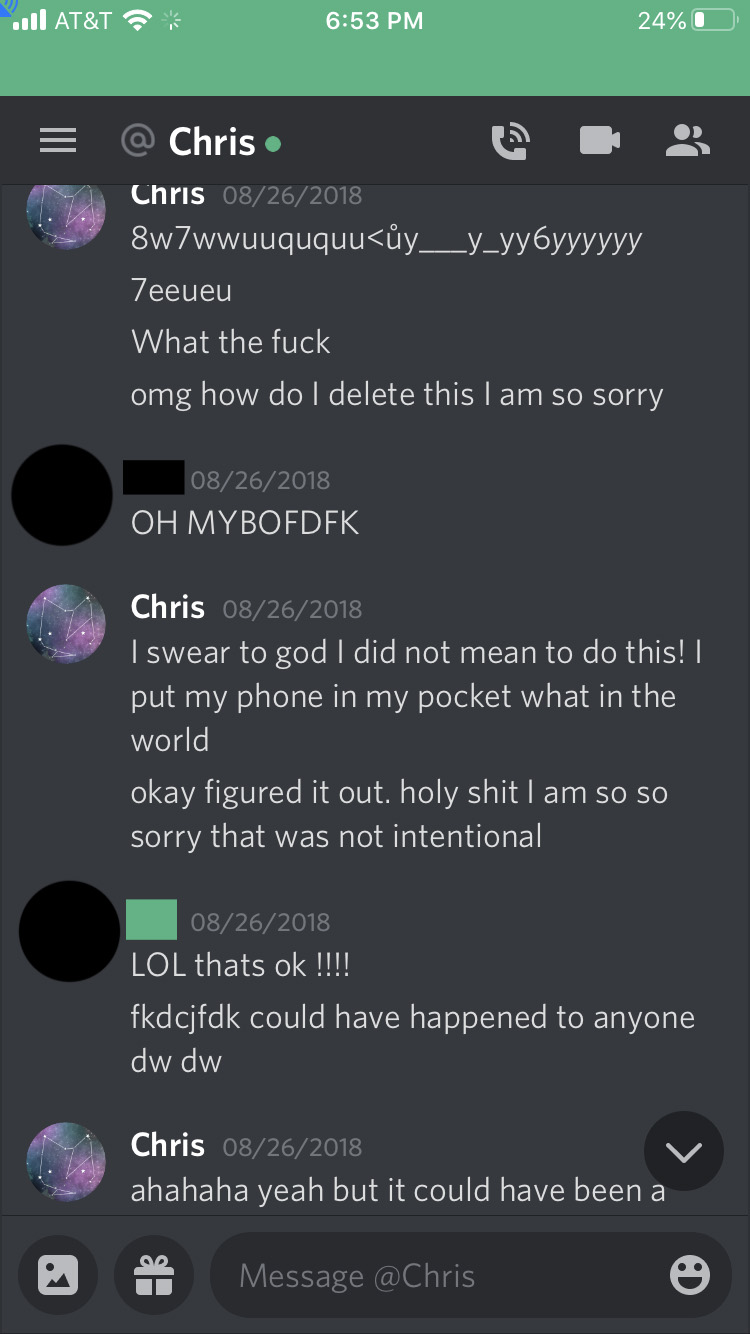 Instead of simply moving past the incident, Thurman chose to push the conversation towards the topic of his genitalia and began to do so by questioning the fan’s ‘surprised’ reaction towards the image. 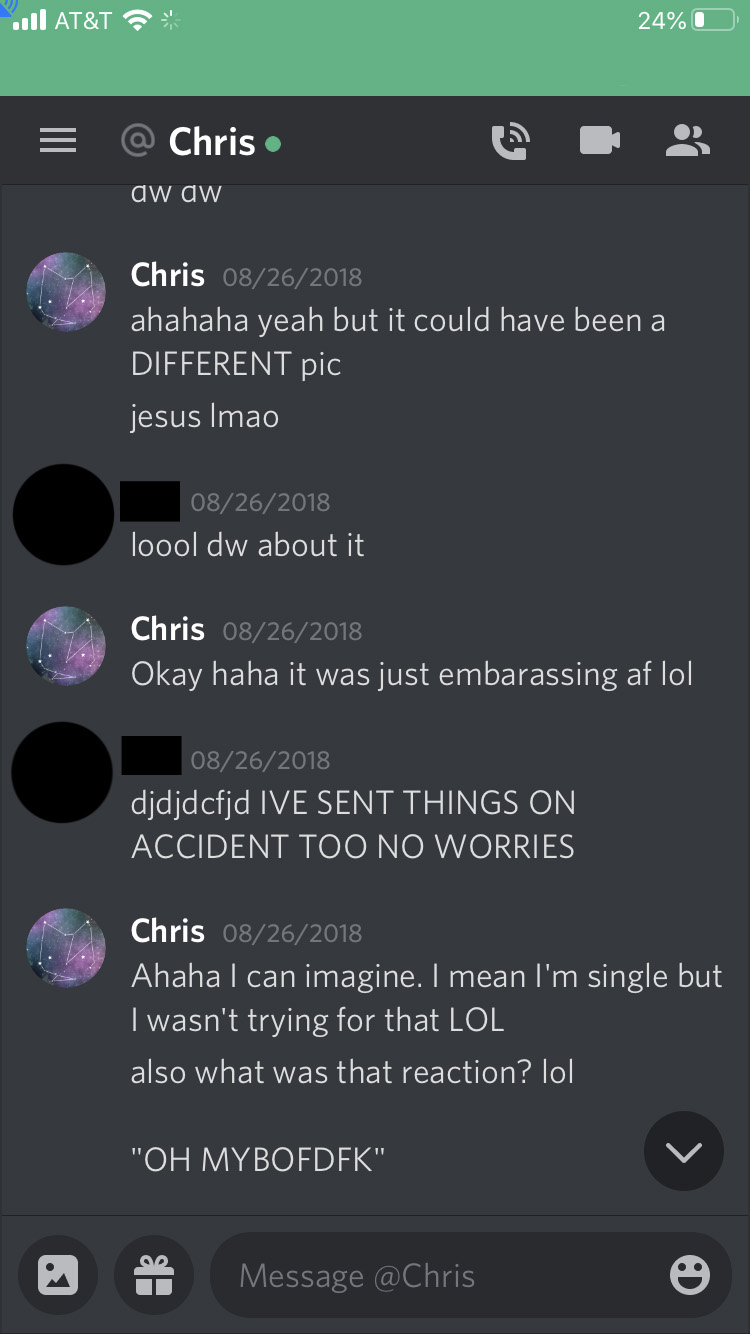 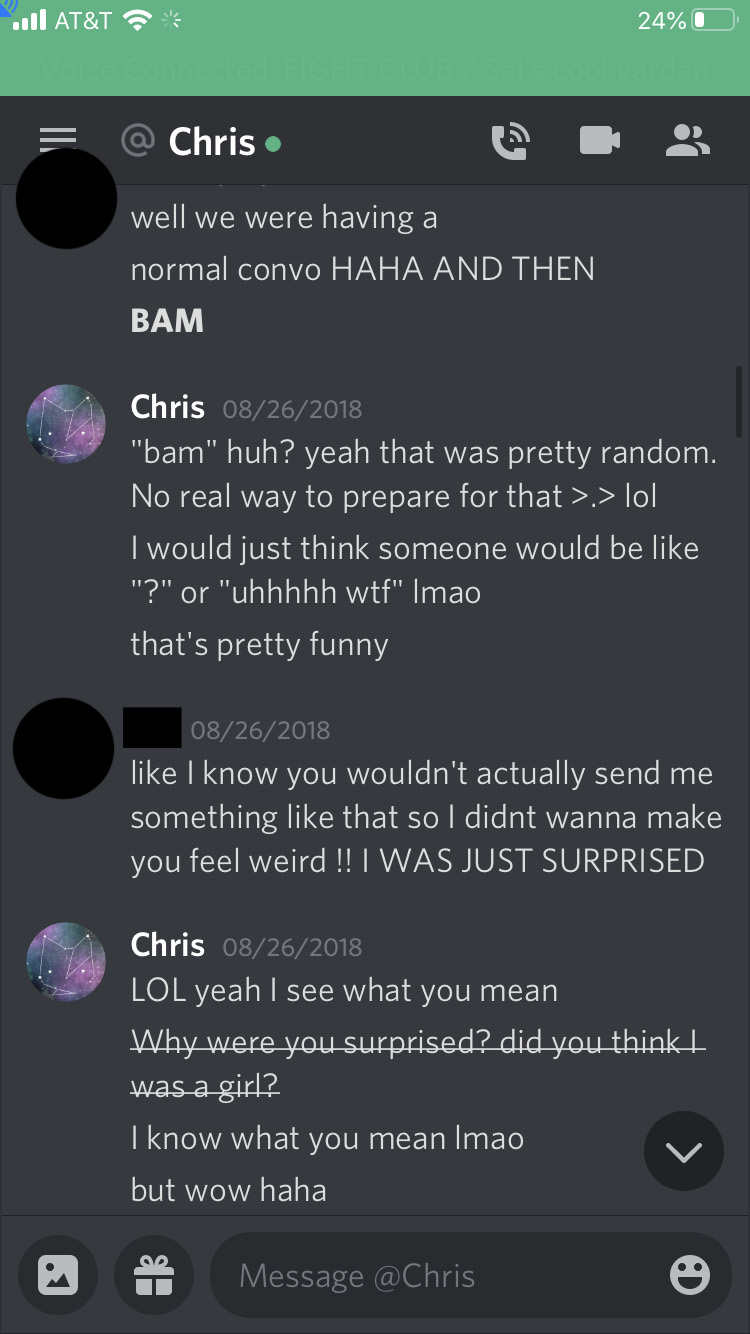 “I just hope you don’t see me too differently after seeing uh…that part of me lol,” said Thurman. “Unless it’s a good different lmao.” 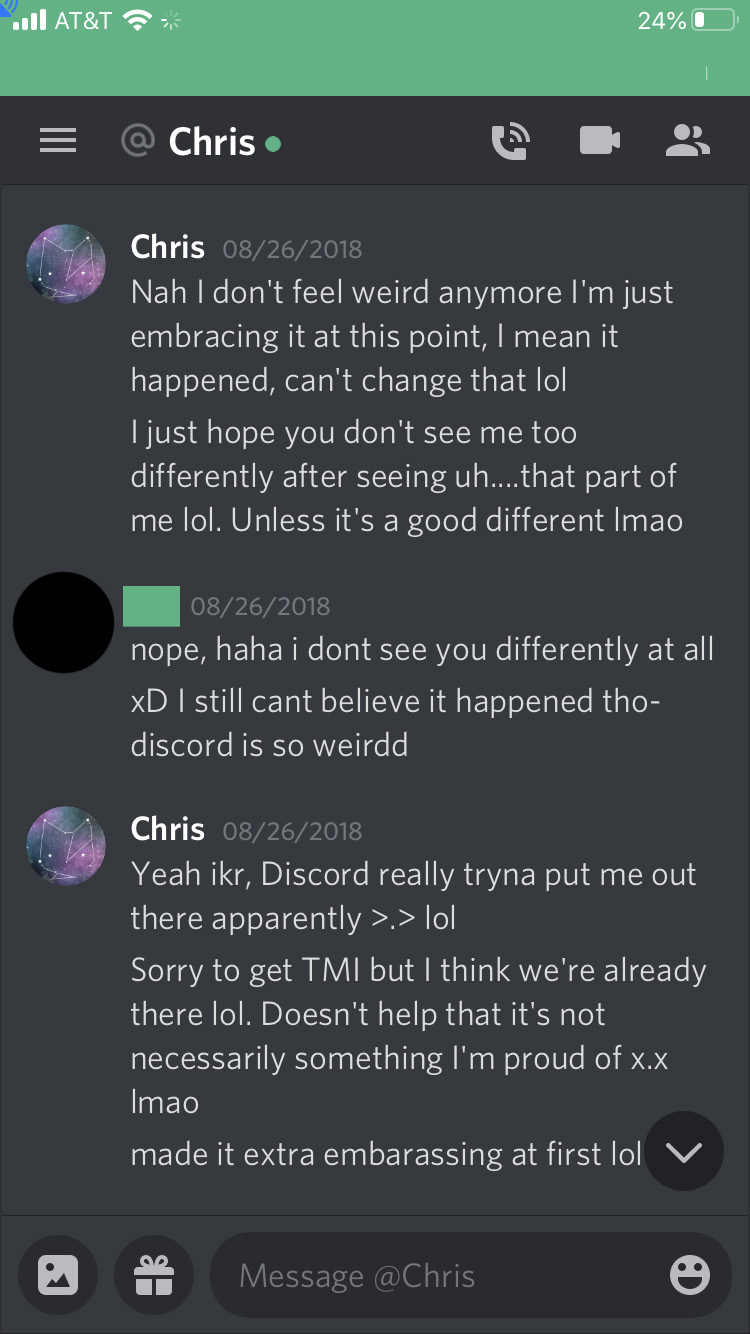 After telling the fan that he was “super down on myself” because he “always thought I wasn’t really that big” in an attempt to solicit compliments and sympathy, Thurman started to describe in detail the alleged physical appearance of his genitalia. 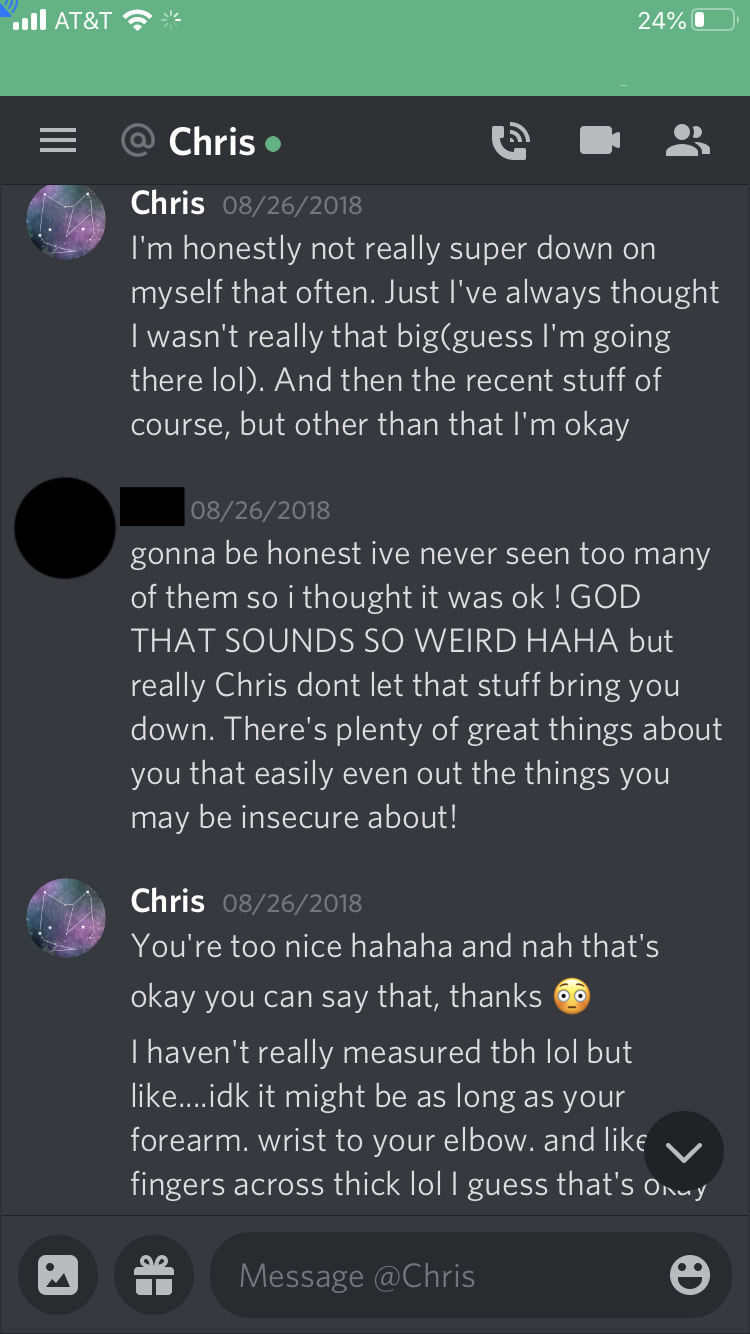 In what seemed to be almost a moment of self-realization amidst the ongoing message exchange, Thurman would suddenly ask the fan “how young are you?”, to which the fan replied that they were “15”.

Unfortunately, despite this clear admission of the fan’s sub-18 age and his own joke that he was “glad I didn’t send that on purpose [because I would] immediately have swat teams and cop cars bust through my windows,” Thurman continued to entertain the sexually charged nature of the conversation, even employing a classic grooming technique by telling the fan that they “seem a little older, in a good way.” 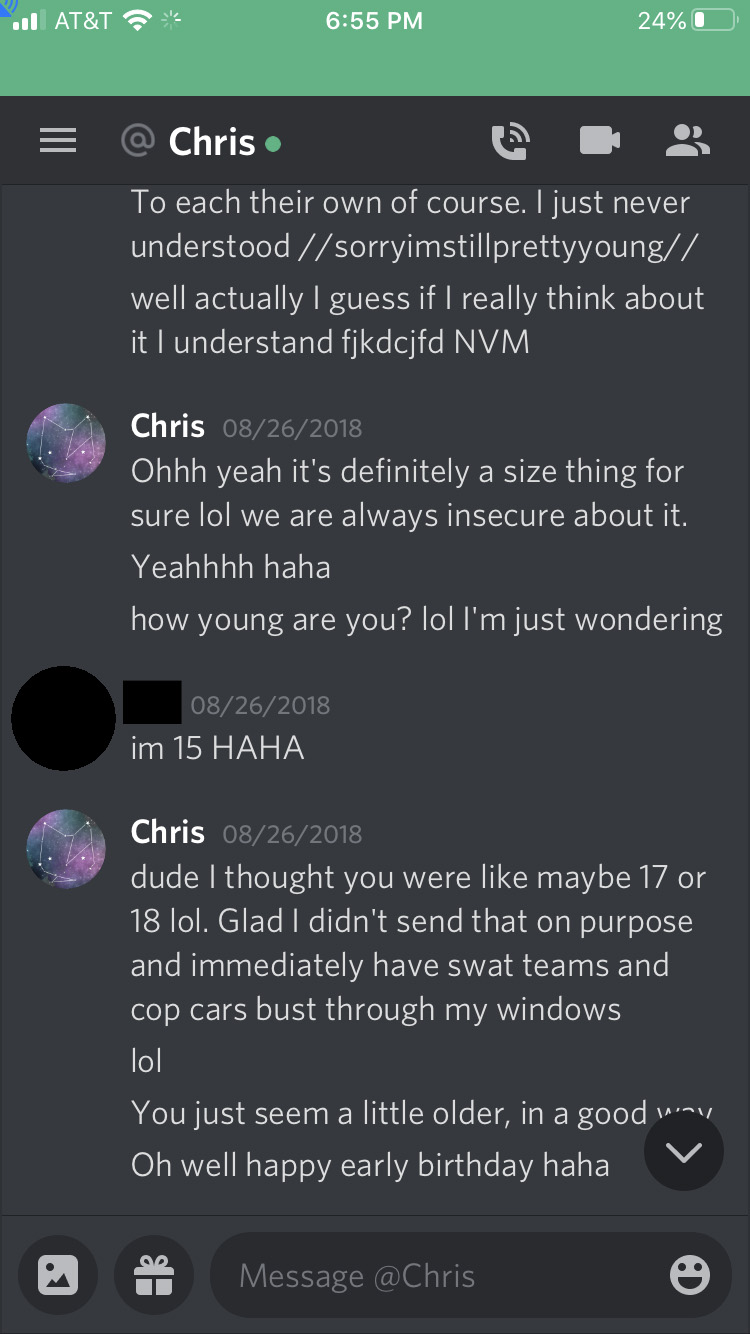 The voice actor would then continue to discuss the size of his genitalia, describing its size and recounting various anecdotal stories in an attempt to impress the underage fan: 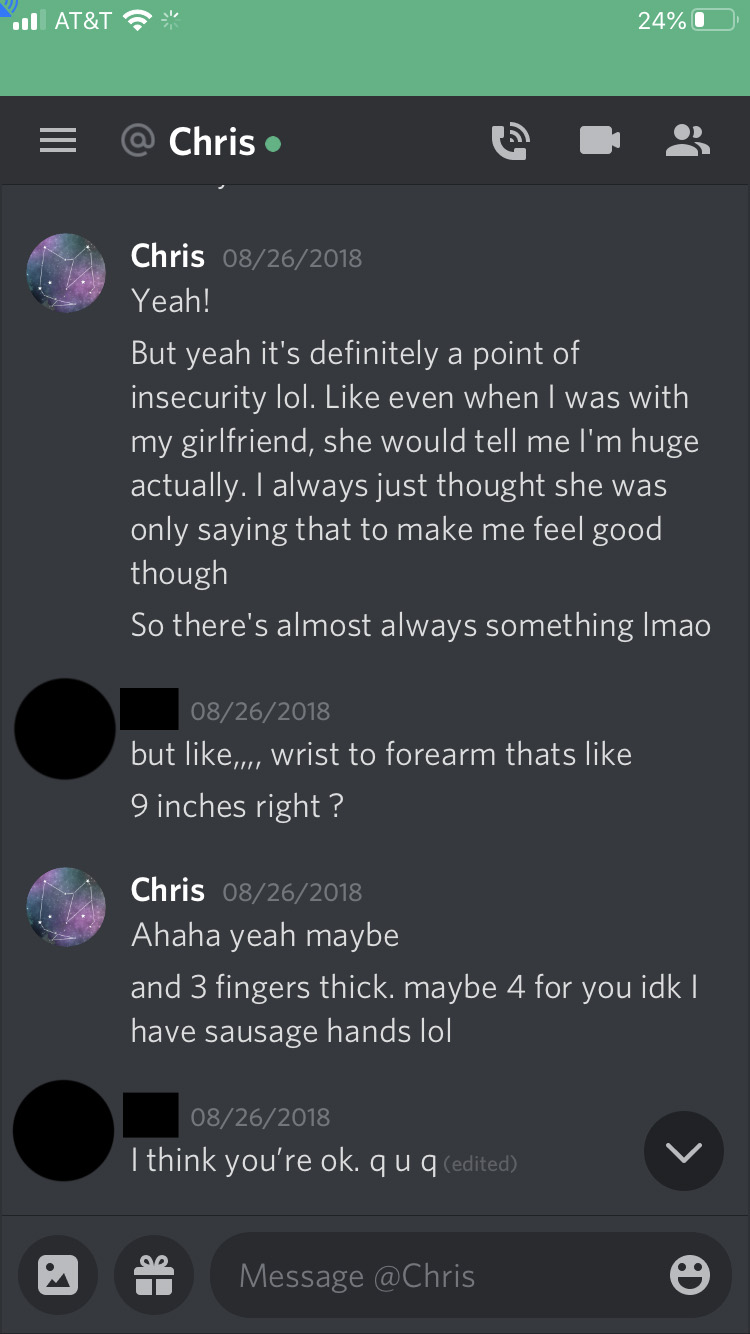 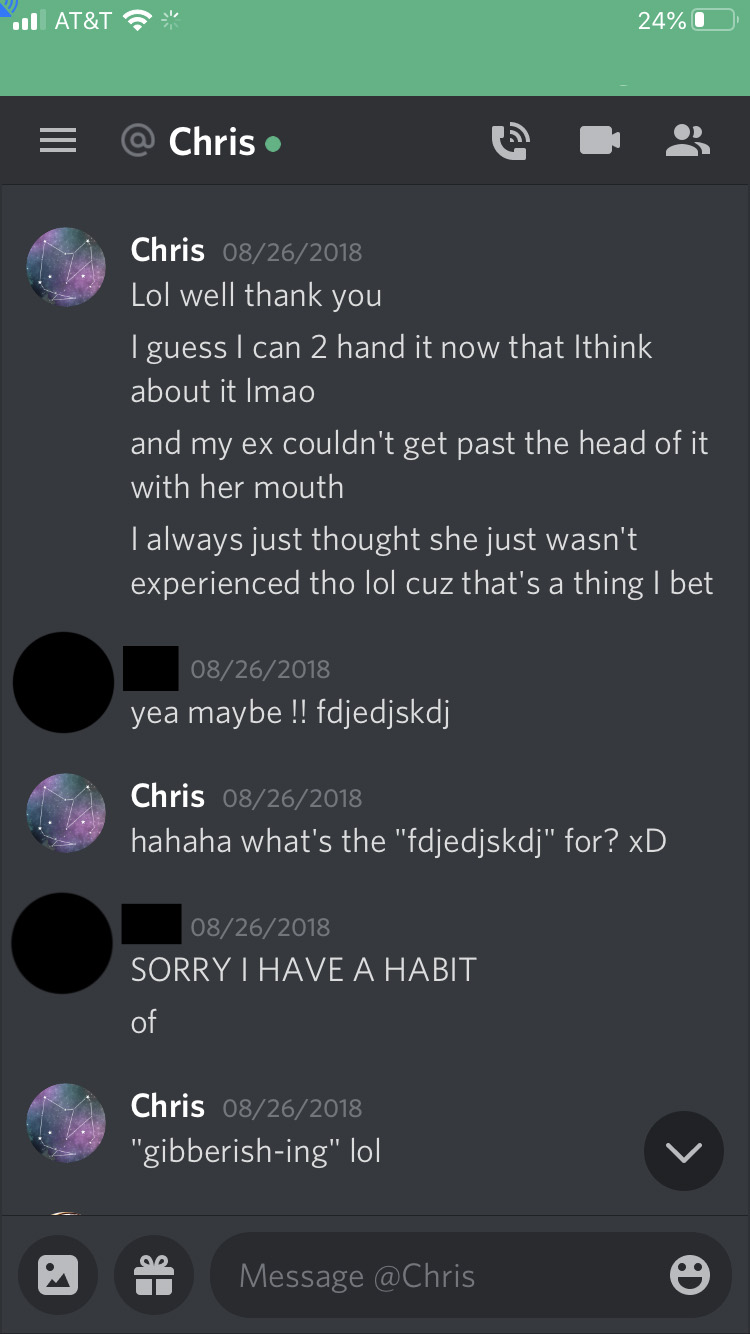 Thurman would conclude this initial ‘accidental’ conversation with the fan by informing her that “it was kind of encouraging to hear an outside opinion on it and it being a good one.”

He stated that the fan could “call me the 9 inch maestro,” and shared the results of his own self-measurement. 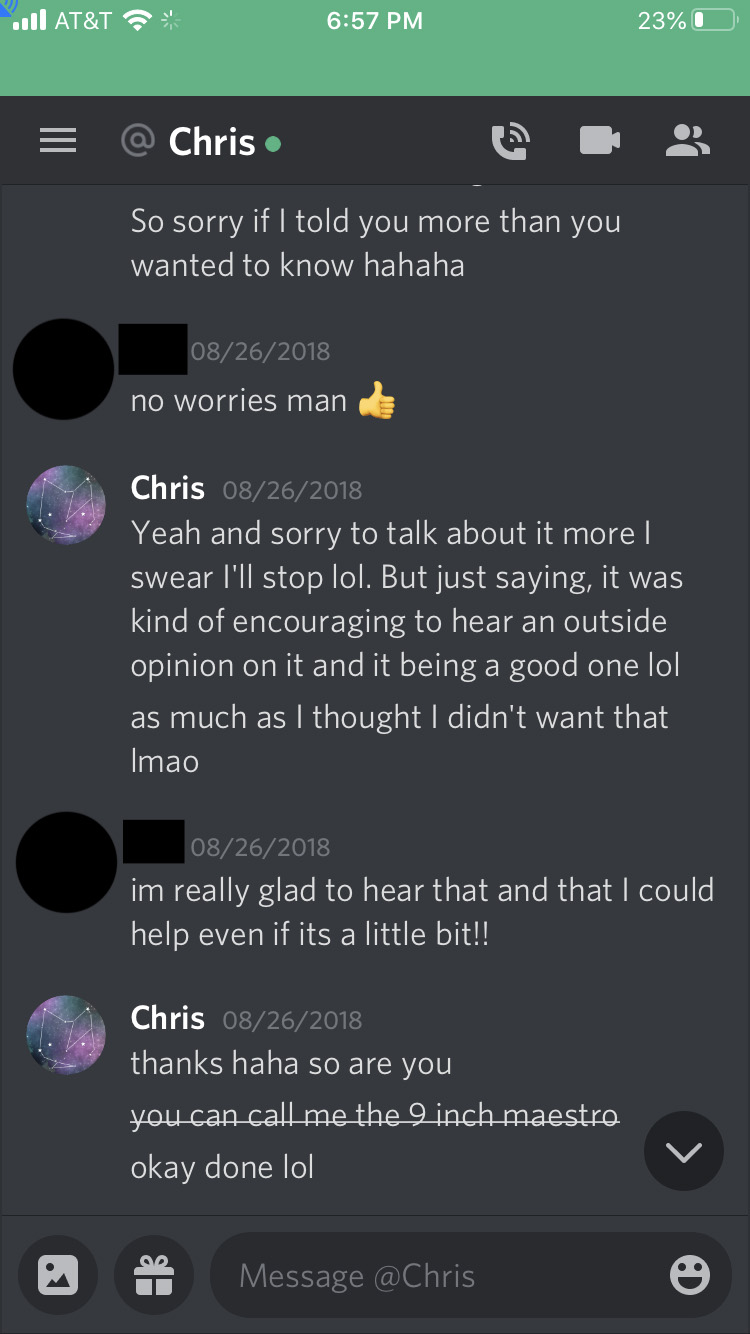 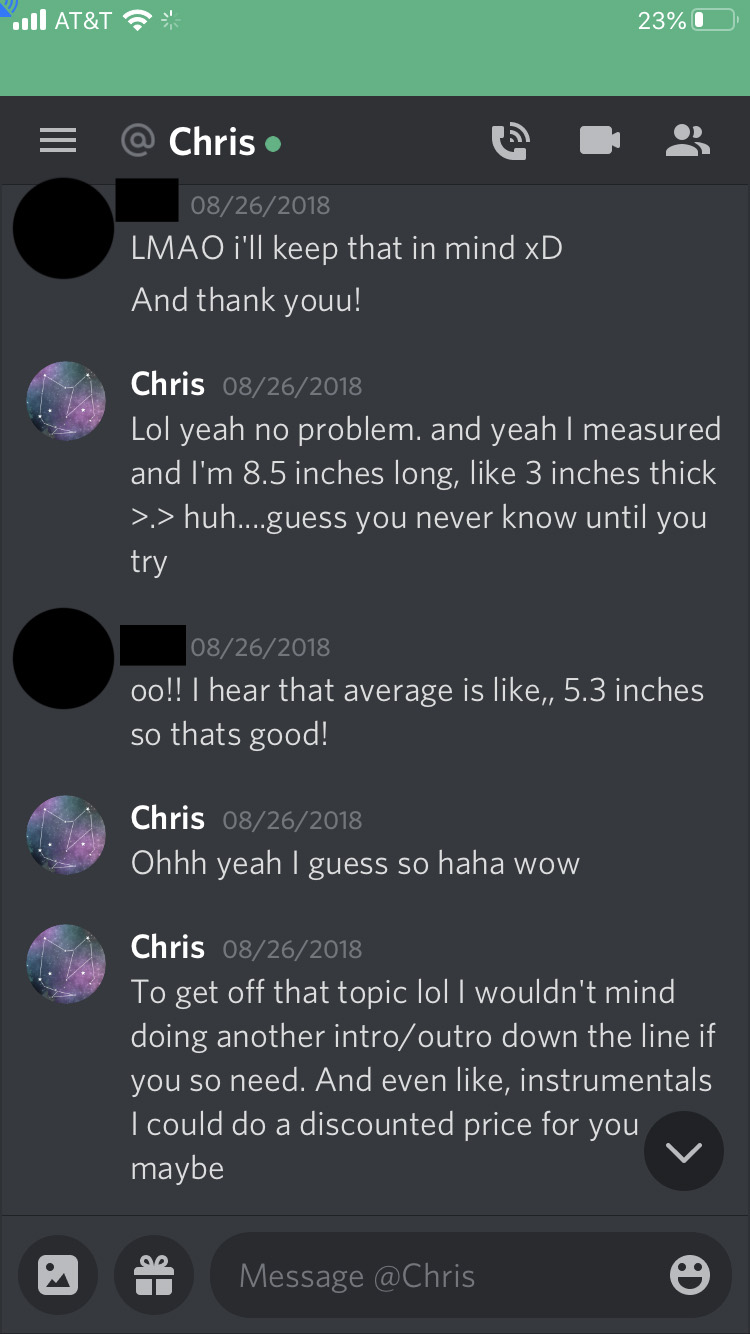 On October 23rd, while talking to the same underage fan, Thurman described the incident as “a Funimation actor showed you their cock” and admitted that “it happened lmao.” 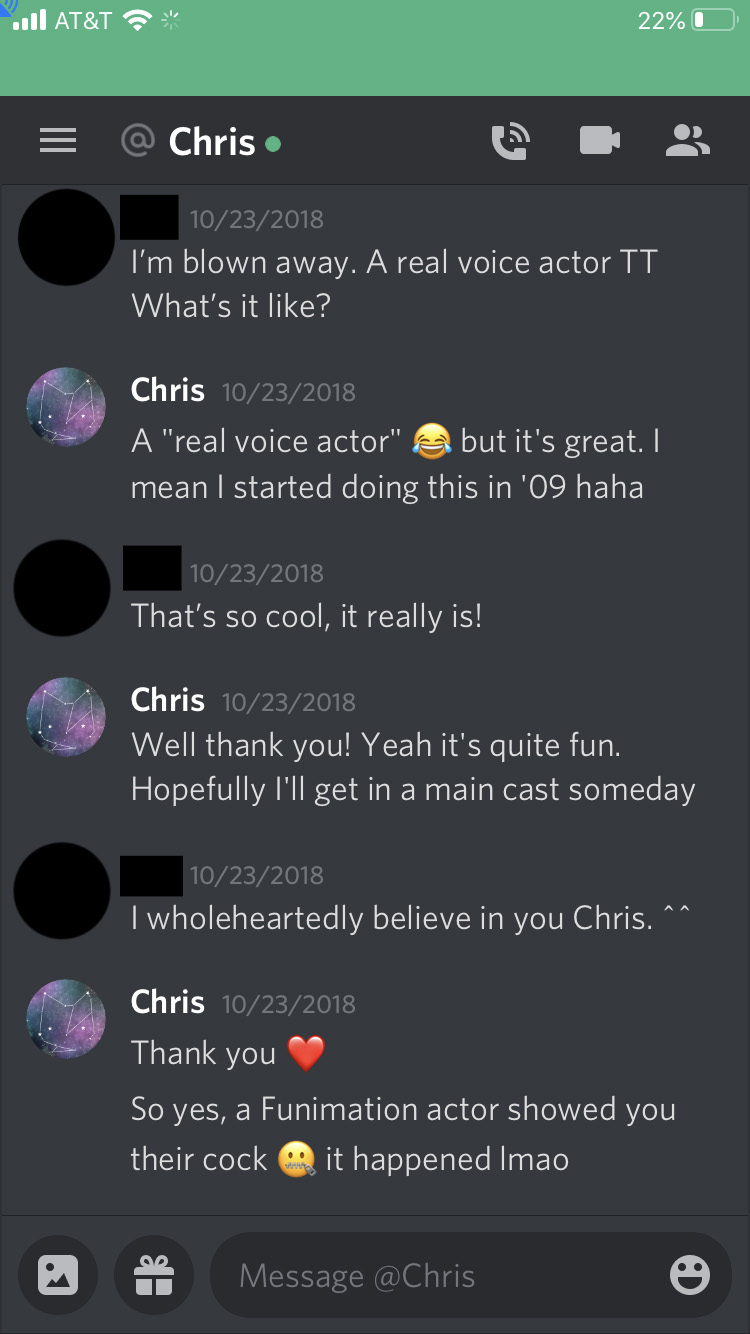 After these accusations and screenshots were made public, Thurman took to his own Twitter account to admit that he had “no rebuttal” and “no defense” against the evidence and explicitly stated that “it’s all there, it happened. Wasn’t an accident.”

“All I can really say is that I am deeply sorry for how uncomfortable I made I made them feel. I was in a very dark place during this time, after a near-decade long relationship ended,” said Thurman. 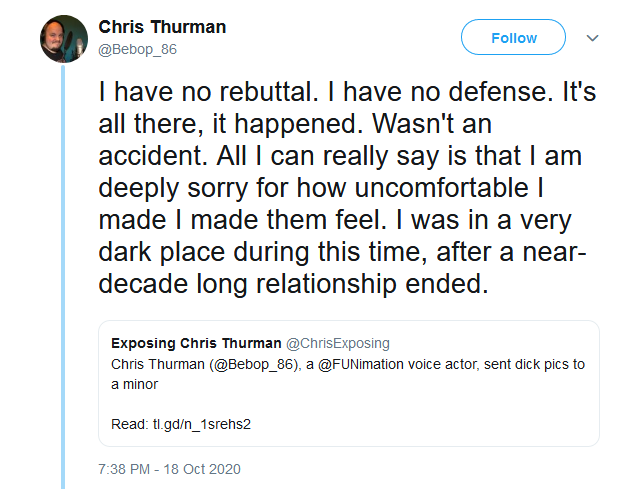 Thurman continued his apology by describing his past actions as “still inexcusable” and stating the he “completely” understood “the disgust towards me.” 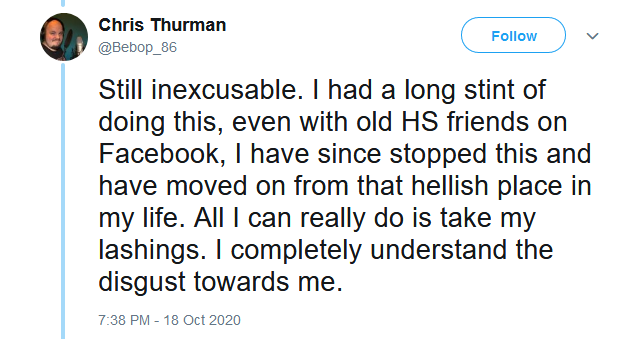 His statement would conclude with a plea to not “harass collaborators I’ve worked with,” as “this isn’t fair to them, they didn’t know about this.”

While Thurman claimed in the texts he began voice acting in 2009, IMDB lists his first credits in 2012 when he was hired to perform additional voices on the widely-popular series One Piece, as well as the voice of the gladiator bull Ucy during the Dressrosa arc.

Since then, he has provided voice work for a massive amount of Funimation’s anime dubs, including Danganronpa 3: The End of Hope’s Peak High School, My Hero Academia, Attack on Titan, Tokyo Ghoul:re, and Miss Kobayashi’s Dragon Maid. 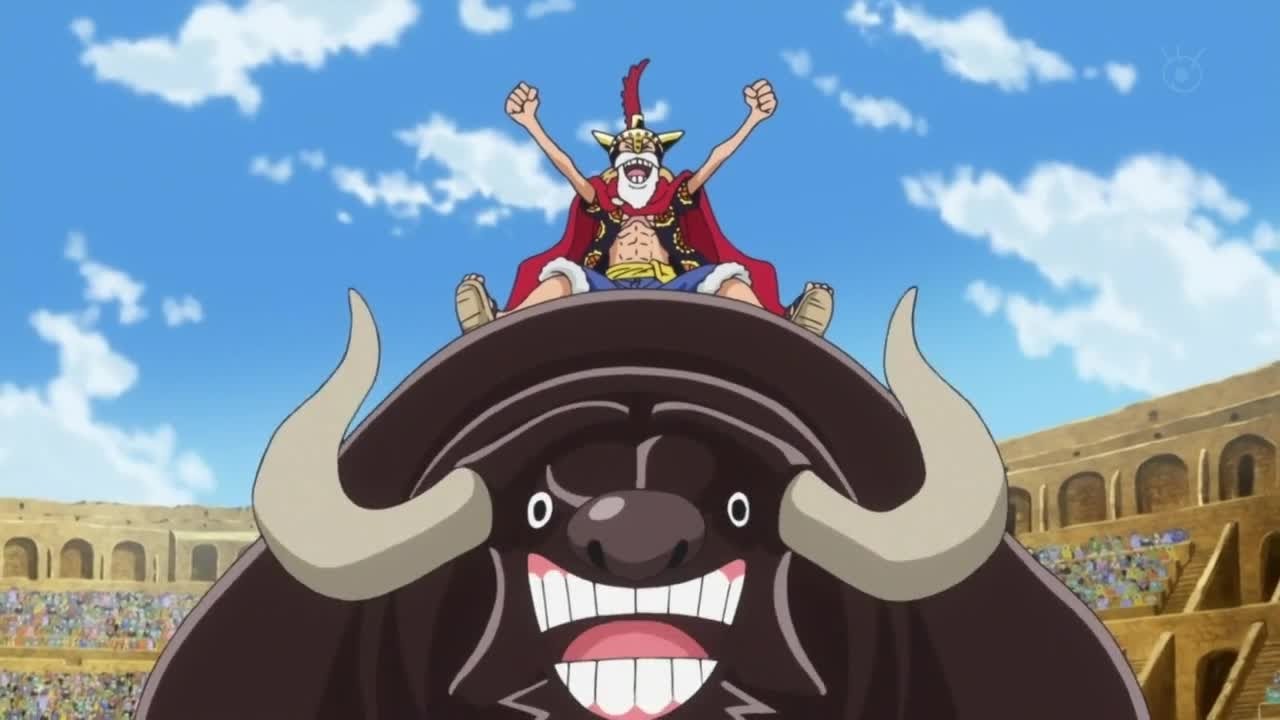 Thurman is the second Funimation voice actor found to have engaged in sexual misconduct related to minors, as in 2014, former One Piece and High School DxD voice actor Scott Freeman was arrested and charged with possession of child pornography.

Curiously, despite his arrest, Funimation continued working with Freeman until his legal conviction in 2015, as the studio claimed that they were not aware of his legal troubles until May of 2015. 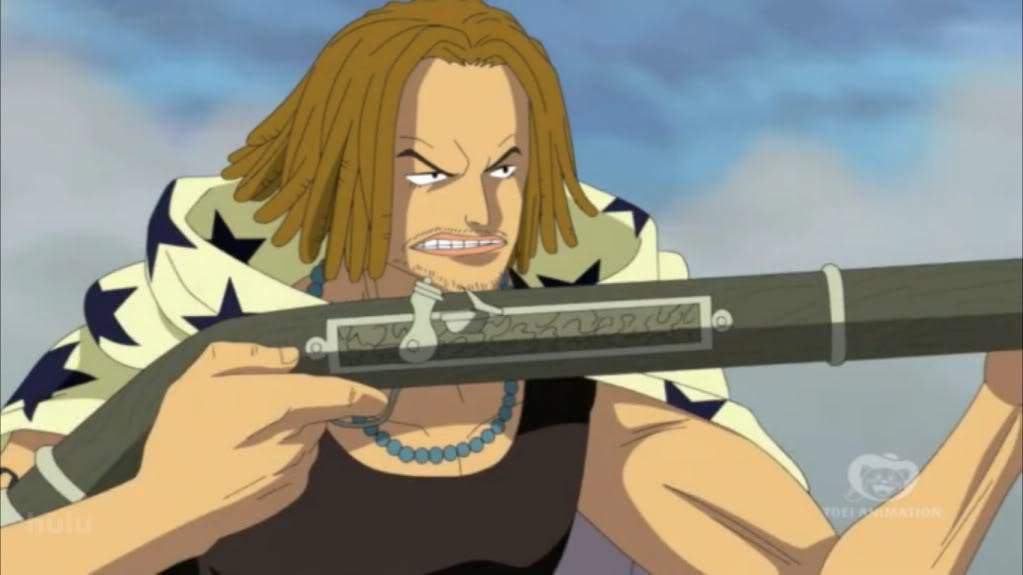 As of writing, Funimation has not publicly commented on Thurman’s actions or his future with the company.