They wrote, “We are aware of this video and it is under investigation by our Brooklyn South Investigation Unit. Police officers must remain apolitical.”

We are aware of this video and it is under investigation by our Brooklyn South Investigation Unit.

He then added, “Updates to follow after initial investigation.” 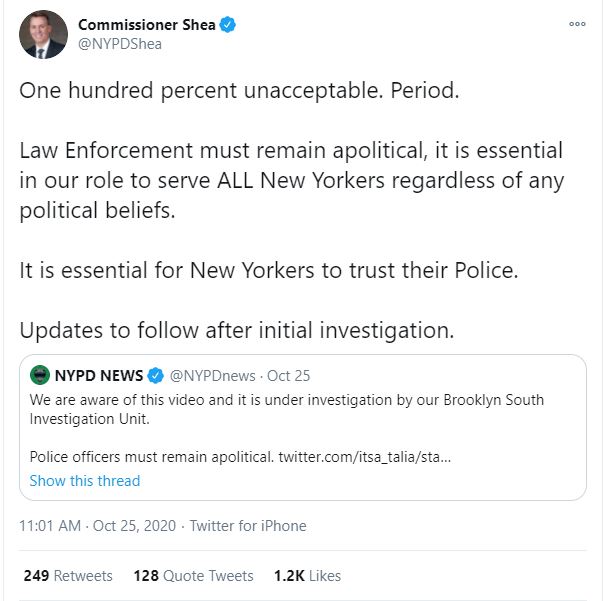 He followed that up with a subsequent tweet writing, “The police officer from this incident has been identified and suspended without pay.”

He then added, “To repeat, law enforcement MUST remain apolitical, reassuring the public that we will enforce the law fairly and without prejudice regardless of anyone’s political beliefs.” 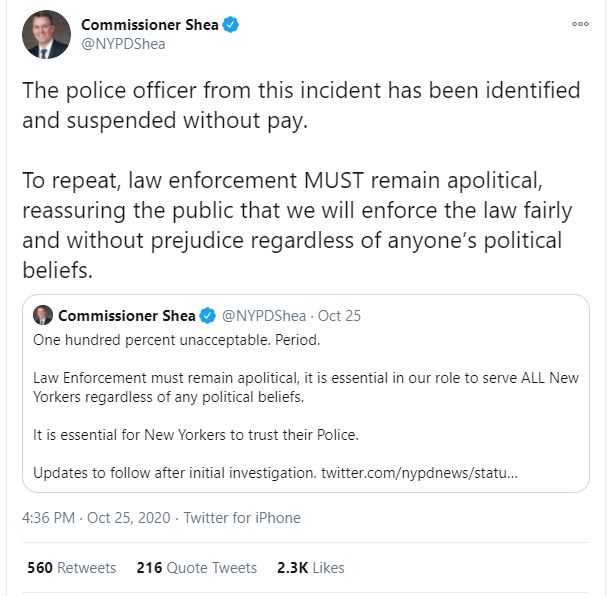 That’s when Marvel Comics writer Daniel Kibblesmith would get involved insinuating the officer in question is a racist.

He wrote, “I can’t remember the last time I heard about anyone with any degree of power in law enforcement or politics just getting straight up fired.”

The Loki writer added, “It’s always like ‘Officer Racist has been placed on Partial-Salary Sadness Probation until he finishes watching American History X on DVD.'” 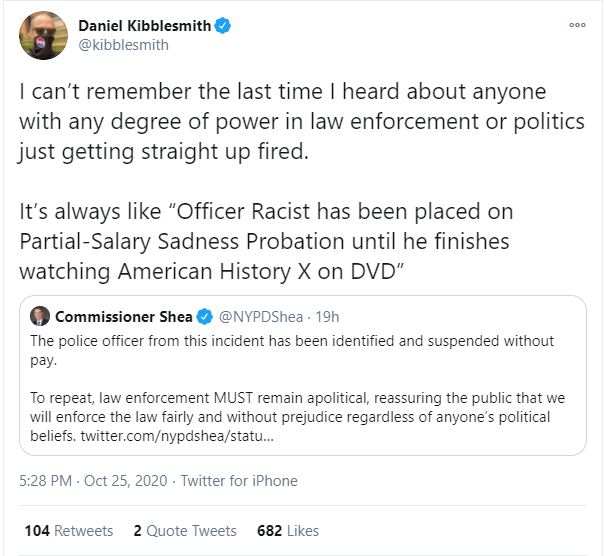 Kibblesmith followed that up demanding the officer be fired.

He wrote, “Normalize firing people who have the power to destroy lives.”

Then in a response to fellow comic book writer Kurt Busiek h would threaten physical violence in order for the officer to be fired.

Busiek wrote, “It takes a while because of union rules. It’s not that often that they actially _can_just up and fire someone without a lengthy process. This needs fixing. I’m all for unions, but police unions seem to be about enforcing a lack of accountability.”

Kibblesmith replied, “Would it help if I came in with my hands wrapped in bandages, gently tapping a baseball bat against my opposite palm.” 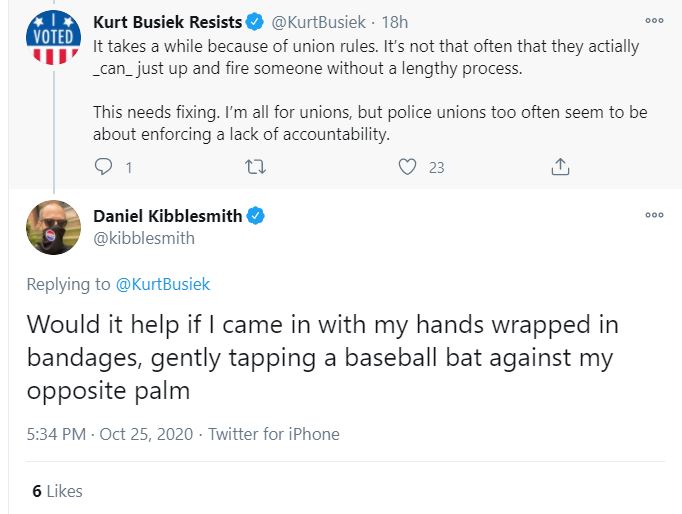 Kibblesmith is no stranger to attacking his political opponents as racists.

Just a couple of days ago he referred to President Donald Trump as a racist.

He wrote on Twitter, “This time in 2016 Hillary was polling at a billion percent and Republicans were talking openly about trying to throw Trump overboard and put Pence at the top of the ticket.”

“Then that racist illiterate motherf***er cleaned our clocks and ate a cake shaped like his own head.” 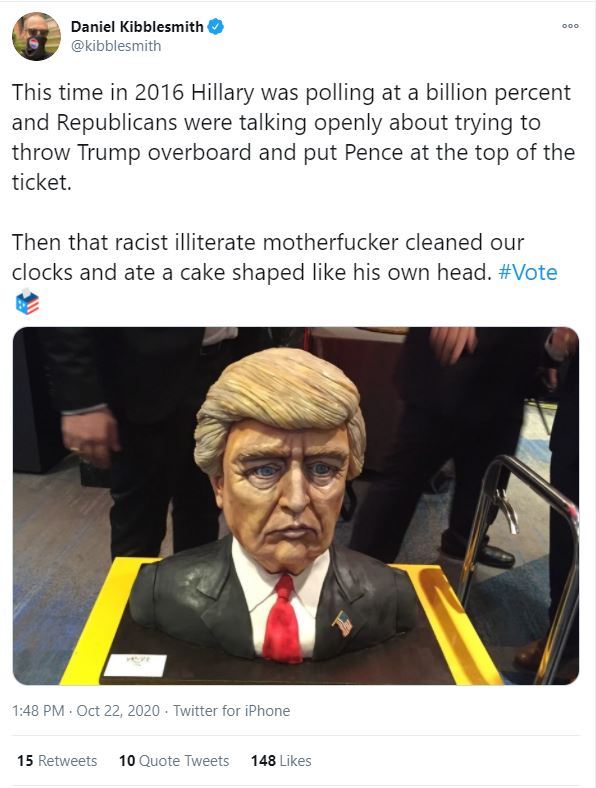 In August, he attacked Megyn Kelly as a racist. He wrote, “My working theory is that when your pivot to mainstream flames out this hard you have to go mega-ultra-racist for your old bosses to take you back.” 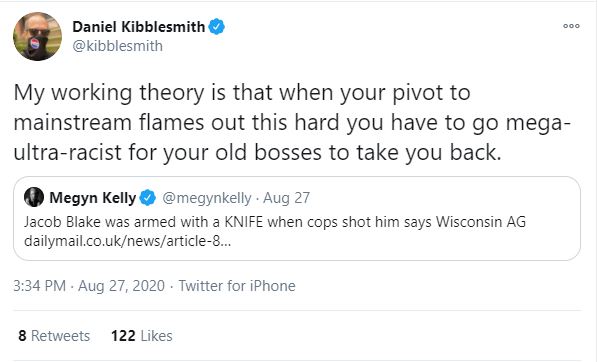 He would also refer to Trump supporters as racist.

He wrote in August, “Crazy how if Trump loses, all his insanely vocal racist supporters will suddenly vanish and everything will be fine forever.”

Kibblesmith’s New Warriors: New is the New Old is expected to be released as a trade paperback on October 27, 2020. It is retailing at $15.99. 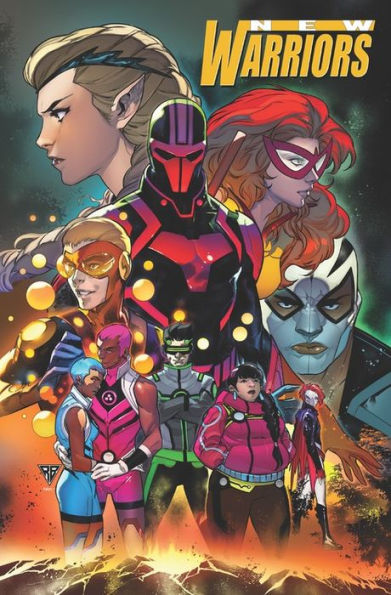 “Don’t call it a comeback – or Night Thrasher will knock you out! Better yet, he’ll get one of the new recruits to do it. With Kamala’s Law in full effect – forbidding unsupervised super-heroics by anyone under the age of 21 – it’s time for former teen heroes the New Warriors to step up. Thrasher reunites with Firestar, Rage, Speedball, Namorita and Silhouette to mentor a whole new generation of heroes…whether they like it or not! But the newest New Warriors soon find themselves trapped with the original crew’s fiercest foes: Psionex! Thrash and the Warriors must save the newbies from certain doom – but another enemy is lurking in the shadows! And wait – just how did Thrash get the band back together anyhow?”