A recent set of rumored casting choices for Ms. Marvel’s upcoming Disney Plus series has led to backlash among fans for a number of reasons, ranging from one actor’s assumed support of President Trump to the accusations of sexual assault faced by another. 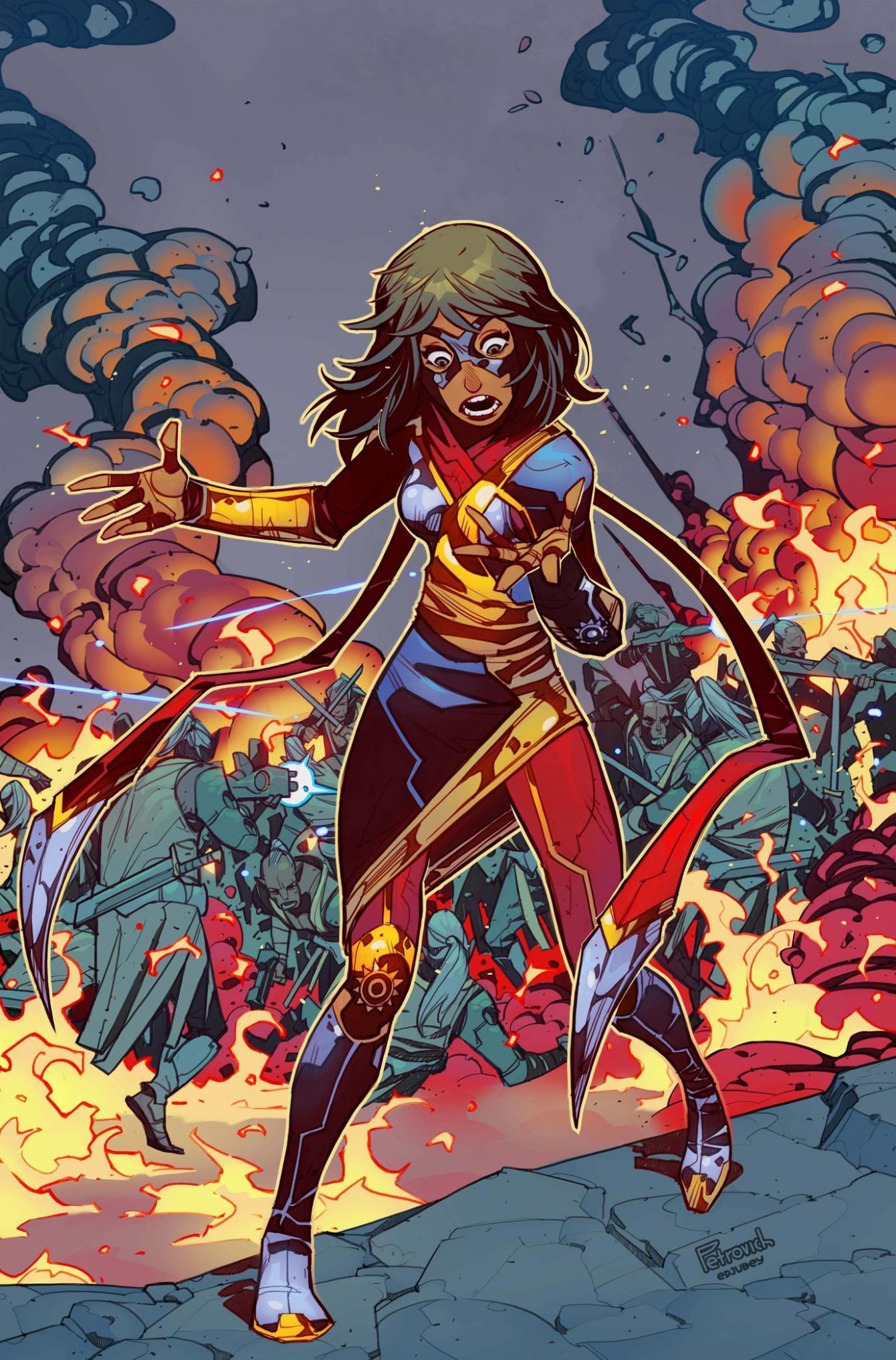 The backlash against the upcoming Marvel series began on December 7th, when Ms. Marvel fan-account @MsMarvelNews announced to their followers that “In light of the recent controversies in casting choices, we at Ms. Marvel News would like to say that we are not associated with the Ms. Marvel streaming show, and we do not condone them.”

The account then proceeded to list their grievances with various members of the rumored cast, most of whom were identified based on a supposed casting report first published by Murphy’s Multiverse.

The first was Andrew Brodeur, best known for his role as Will in Tall Girl, who is rumored to play Josh Richardson in the series.

Brodeur’s supposed casting, as explained by fan-account @LTMsMarvel, is widely believed “based on Andrew’s Instagram activity.” 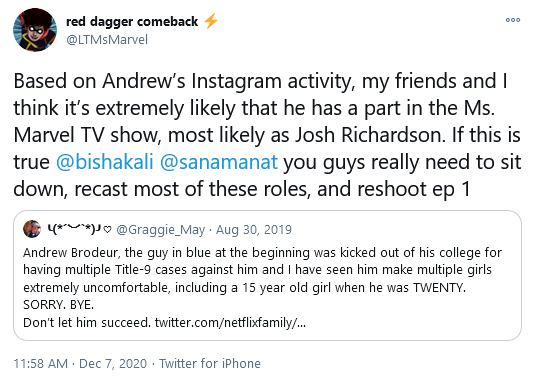 According to a 2019 tweet from @Graggie_May, Brodeur “was kicked out of his college for having multiple Title-9 cases against him and I have seen him make multiple girls extremely uncomfortable, including a 15 year old girl when he was TWENTY.” 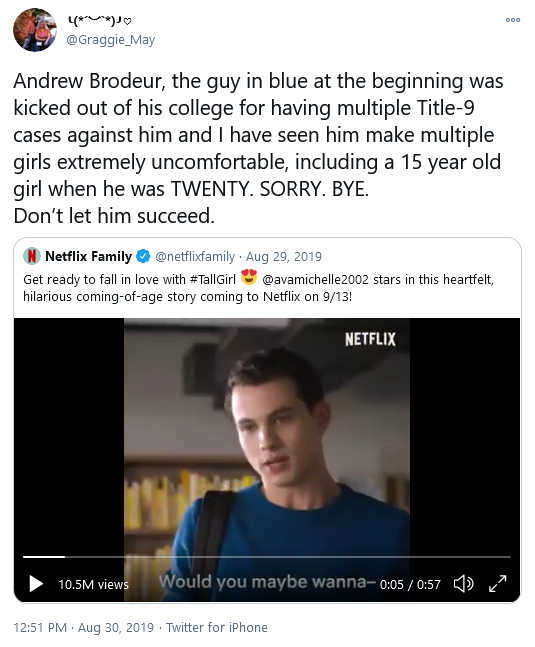 While the @MsMarvelnews account provided a link to background check information aggregator MyLife and claimed that it held proof of Brodeur’s Title IX accusations, this information is locked behind a paywall on the website and is unable to be verified by Bounding Into Comics at this time.

It should also be noted that MyLife is currently being sued by the Federal Trade Commission on charges of posting misleading information. 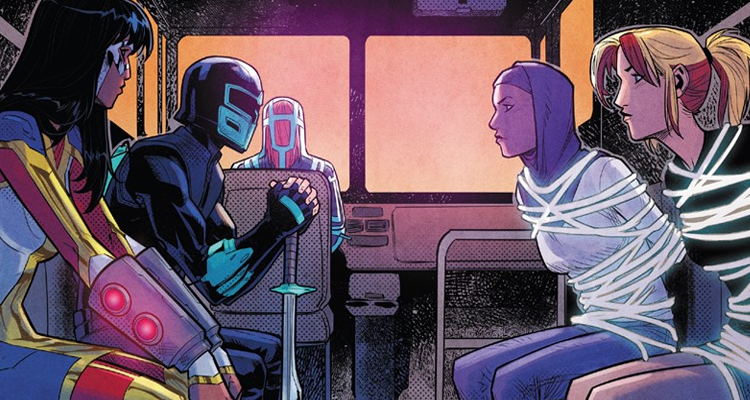 However, some Twitter users have claimed to have personal knowledge of Brodeur’s alleged abuse, such as @Fine_and_Danny, who replied to multiple threads discussing Brodeur’s casting claiming “this guy was in my class at college” and asserted that “he was a terrible person who assaulted my friends and was verbally abusive to all of us.”

“You want to know anything I got dirt,” he added.

@PaigeOkey claimed that she had been one of his victims, declaring that she “didn’t go through what I went through to see that a giant like @MarvelStudios put the man who sexually assaulted me on a set with a teen so he can do it again.”

She added that “Andrew Brodeur is a predator” and stated that she had “the therapist and three years of recurring nightmares to prove it.” 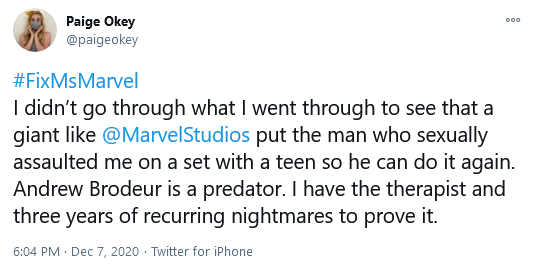 Matt Lintz, who played Henry in The Walking Dead and is set to portray Ms. Marvel’s best friend and love interest Bruno Carrelli, was derided as a Trump supporter due to his liking of three tweets, two from 2018 and one from 2017, respectively. 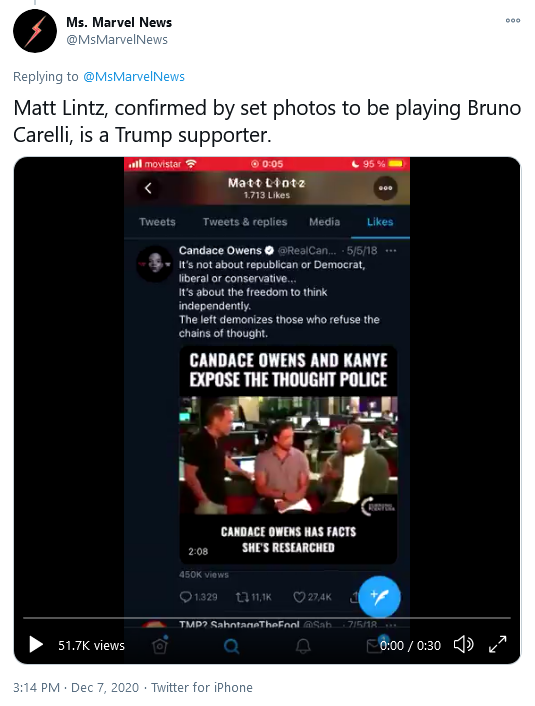 The first was from conservative commentator Candace Owens, who shared a video of herself and Kanye West being interviewed by TMZ and wrote “It’s not about republican or Democrat, liberal or conservative…It’s about the freedom to think independently.” 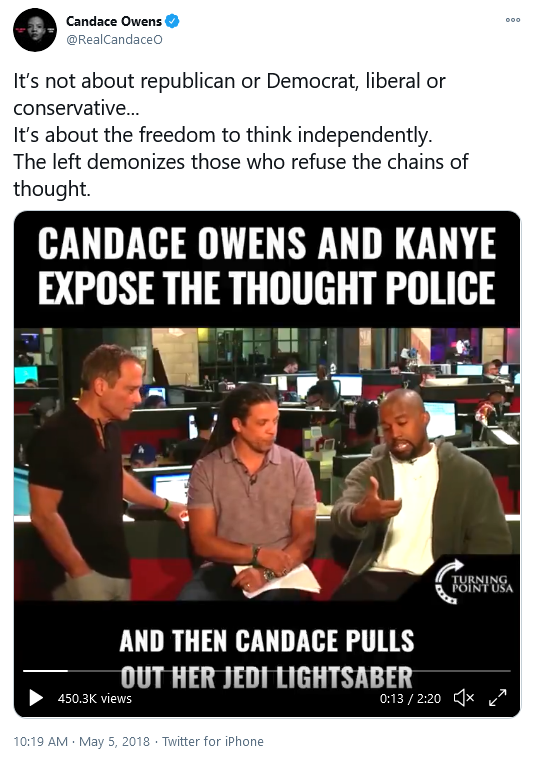 The next was West’s infamous ‘dragon energy’ tweet in which, the rapper and former-presidential candidate shared his opinion that “you don’t have to agree with trump but the mob can’t make me not love him.”

“We are both dragon energy,” West wrote. “He is my brother. I love everyone. I don’t agree with everything anyone does. That’s what makes us individuals. And we have the right to independent thought.” 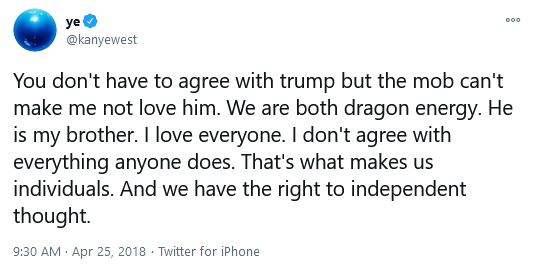 Lintz soon faced a wave of abuse and harassment based on his assumed political beliefs, prompting the young actor to publish a statement, “I’m writing this because I’m sick and tired of hearing the same negative and degrading comments about me and who I am as a person from people who have never met me for a second of who I am as a person.”

“I’m coming out on the record to say I AM NOT A TRUMP SUPPORTER,” he exclaimed. “I am a 19 year old kid who is self aware that I don’t know anything about politics so I therefore don’t speak on it.”

He added, “I am rather allowing myself to get educated on matters so when I truly speak on them, I know im educated well enough to talk about the said matter. Many have taken me not saying any politically as I’m on one side or the other when it’s just not the case.”

“I have tried to stay out of political situations but I felt I needed this to be said. With that being said, this will be my lost post regarding anything political,” he concluded. 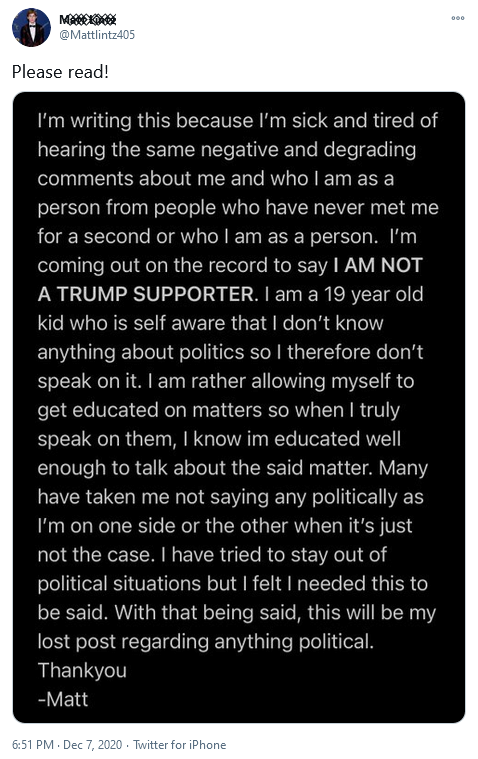 @MsMarvelNews then turned to express their dissatisfaction with the race of two alleged cast members, Yasmeen Fletcher and Zenobia Shroff.

“Yasmeen Fletcher has not done anything as egregious,” said the account. “but we find it inappropriate that a half-white Christian girl was apparently cast as Nakia Bahadir.” 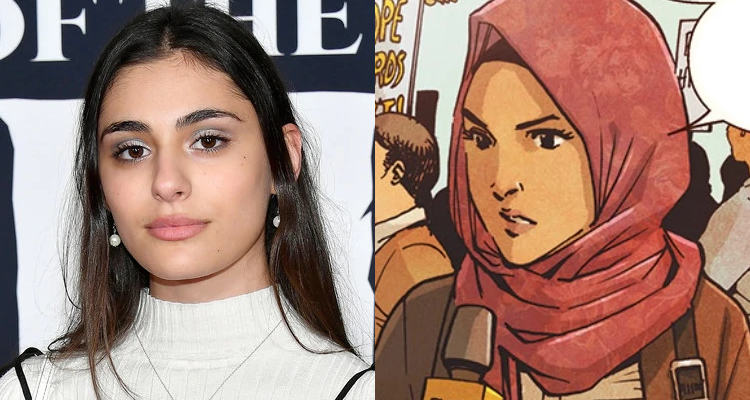 The account would also declare that “Same goes for Zenobia Shroff, who is a non-Muslim Indian apparently cast as Kamala’s Pakistani Muslim mother.” 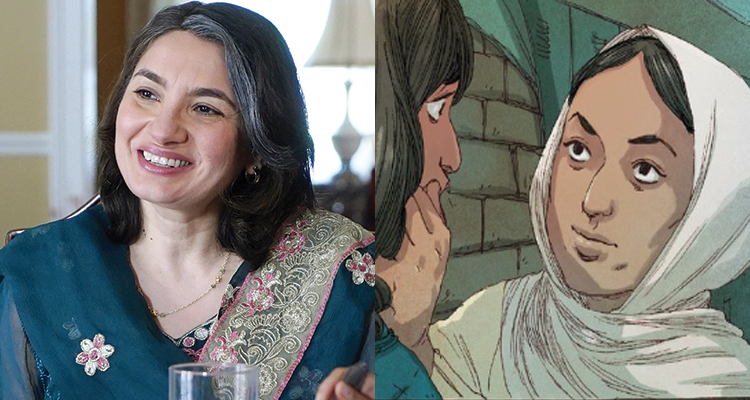 As of writing, there has been no official communication regarding these accusations.

What do you make of this backlash? Let us know your thoughts on social media or in the comments down below!”