Cartoon Network and the National Black Justice Coalition have teamed up to produce a new mini-comic that aims to educate children on the subject of gender pronouns. 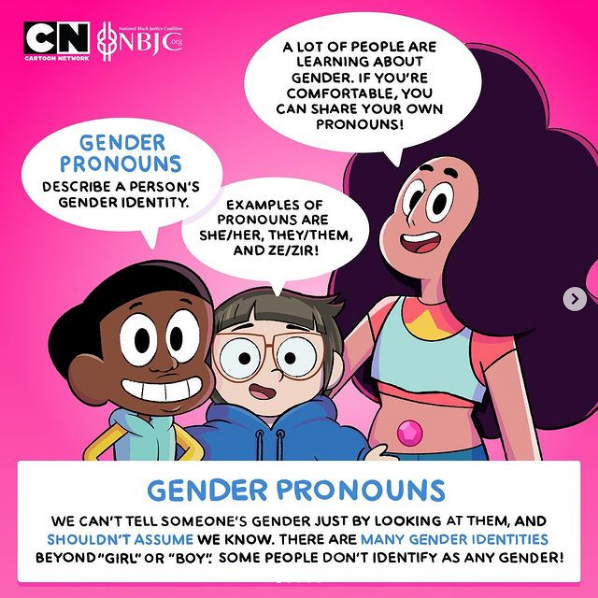 Published on December 14th , the mini-comic follows the Cartoon Network characters Craig (Craig of the Creek), Steveonnie (Steven Universe), and Chloe (We Bare Bears) as they meet two ‘non-binary’ individuals and learn how to use personal gender pronouns.

“We can’t tell someone’s gender just by looking at them, and shouldn’t assume we know,” reads the comic’s title page. “There are many gender identities beyond “girl” or “boy”. Some people don’t identify as any gender!”

On Instagram, Cartoon Network wrote “Here’s to not only normalizing gender pronouns, but respecting them, too 💖🧡💛💚💙💜🖤 Whether you use he/she/them or something else, we acknowledge, affirm and LOVE you!”

The National Black Justice Coalition (NBJC) describes itself as “a civil rights organization dedicated to the empowerment of Black lesbian, gay, bisexual, transgender, queer and same gender loving (LGBTQ/SGL) people including people living with HIV/AIDS” whose “mission is to end racism, homophobia, and LGBTQ/SGL bias and stigma.”

According to an official press release published by the NBJC, “The comic was designed by members of the NBJC Youth and Young Adult Action Council (YYAAC) with artist Steven Lowe (@steeeeevn), a team of talented creators from Cartoon Network Studios, and leadership from NBJC’s director of education programs and research, Dr. Kia Darling-Hammond.” 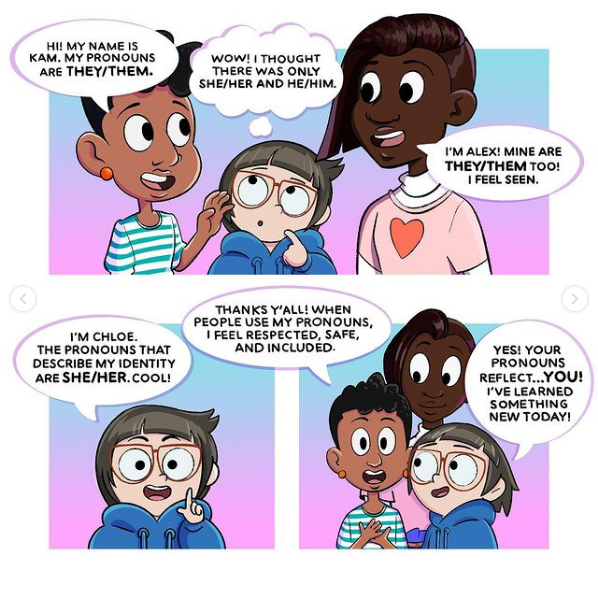 “At the heart of our work at NBJC is affirmation of the dignity and beauty of our Black transgender, gender nonconforming, nonbinary and other gender-expansive siblings,” said Dr. Kia Darling-Hammond. “This comic strip advances our goals by showing what it looks like to treat people with respect, while finding a sense of common humanity.”

“Our hope is that this strip’s audience, of all ages and backgrounds, will feel inspired to begin volunteering their own gender pronouns, respect those of others, and normalize awareness of the existence of people across the gender universe,” she added. “We believe that recognizing and celebrating gender expansiveness will move us closer to a world where we can all be healthy, happy, and whole.” 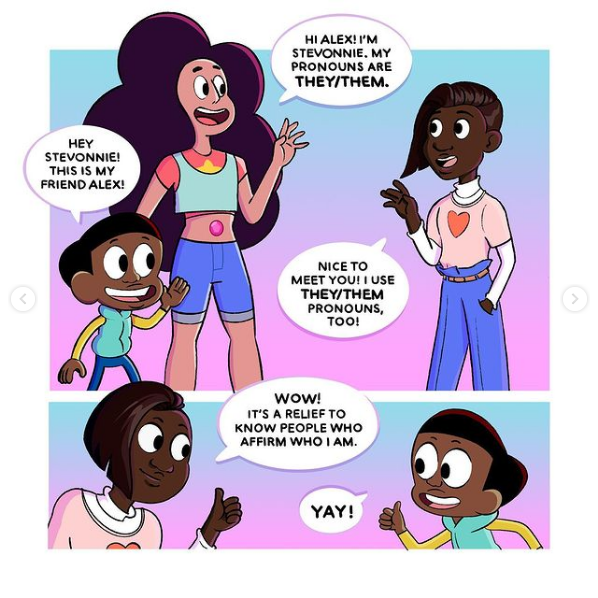 Related: Emily Ratajkowski Says Her Child Will Choose Their Gender At 18, Claims She’s Been “Traumatized” By White Men

NBJC YYAAC member Sage Grace Dolan-Sandrin asserted that “Visibility and representation on a wide scale is exactly what we need to ensure the safety and appreciation of our queer youth.”

“For many of us, seeing ourselves reflected in fictional worlds allows us to envision a place for ourselves in the real world,” Cartoon Network’s partnership with NBJC will play an integral role in saving and improving the lives of young queer kids across not only the nation, but the world.” 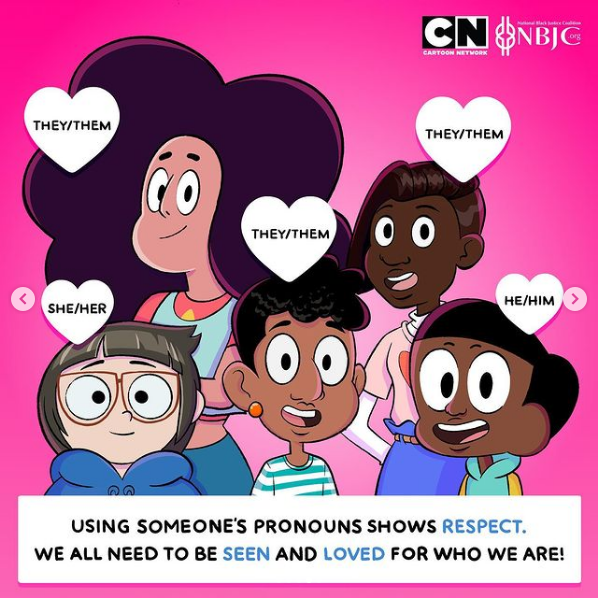 At the conclusion of the comic, Cartoon Network directs its audience to the NBJC’s ‘Gender Justice Toolkit’ in order to “learn more about how you can make the world a better, safer place!”

“This specific toolkit has been designed with the goal of ensuring gender justice in mind,” the NBJC writes in the Toolkit’s opening page. “Which means ending the violence that Black women and girls—both cisgender and transgender, as well as gender non-conforming people— experience simply as a result of who they are and how they exist in the world.” 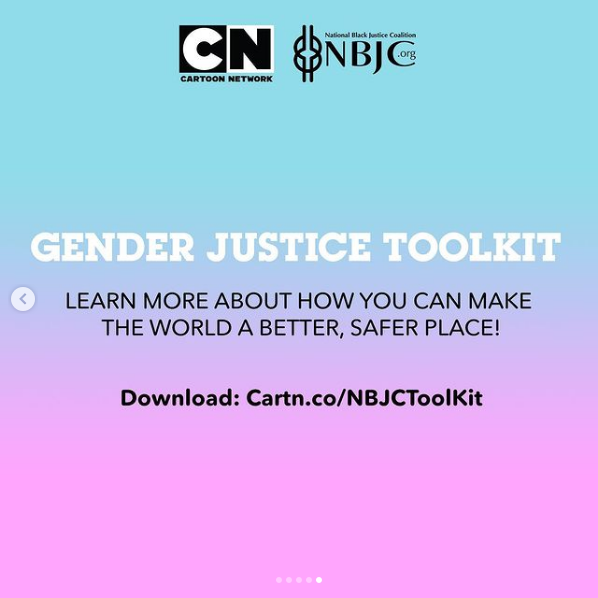 This mini-comic is the latest in a series of ‘statements’ produced by the television network advocating for critical social justice and race theory-based justice and education.

Recently, the Cartoon Network debuted two anti-racism PSAs featuring the Crystal Gems, which saw the Steven Universe characters teach viewers how to be advocates for the practice of ‘antiracism’, as developed by author and activist Ibram X. Kendi.

What do you make of this comic? Let us know your thoughts on social media or in the comments down below!