Jones took to Instagram to share her outfit stating, “Got dressed up to do chores on my bday! Thanks for all the love this year, it’s my wish today that this year I spend a tad less time in my backyard.”

Related: The Eternals Actress Salma Hayek Shows Off The Goods In Bikini Selfie To Ring In The New Year

In her Instagram stories she would turn the photo into a meme, pointing out the sad reality for many people during the ongoing Covid-19 lockdowns and government imposed regulations.

As you can see below she added the words, “Here I guess I am miming the abandoned tradition of shaking hands.” 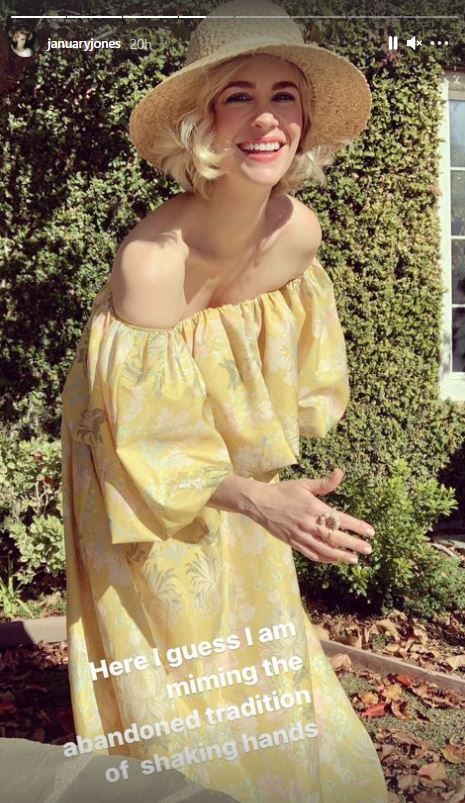 Jones would go on to share a close-up of her face and shoulders.

She then shared an odd video of her doing some chores in the dress, mainly she just blows a bunch of leaves around in her backyard.

The actress wrote, “Blowing leaves for now, candles later.. for people who know me well know that I love doing chores in gowns, keeps me humble.”

Jones recently posted a number of photos of herself wearing bikinis in response to an email from The National Enquirer claiming they were going to “publish a story which reports January Jones has worried friends with her series of attention-grabbing bikini pictures and social media posts.”

Jones published the a screen shot of the email to Instagram stating, “Shit. They’ve discovered my secret. Consider this my public apology to my ‘friends.'”

She would go on to mock the email and its description of her bikini shots as “desperate cry for attention” by posting more bikini shots.

Jones posted a photo of herself in a pink saying, “Had to do it. #DESPERATE.”

She then shared another photo of herself in a yellow bikini from when she played Betty Draper on Mad Men.

Jones would also share a photo of herself in a red and white one-piece swimsuit which she accessorized with with sunglasses and a gold necklace.

She wrote, “This Cali Xmas is so confusing to me. Missing the snow and my family but grateful for so much.”

Jones can currently be seen as Carol Baker in the Spinning Out TV series on Netflix. The show stars Kaya Scodelario as Kat Baker, who is a young figure skater who is given the opportunity to restart her career as a pairs skater after she suffered a serious injury.