Before Oswalt called for President Donald Trump to be jailed, he mocked his supporters.

The actor wrote on Twitter, “Oh god the MAGAs are storming the Capitol. I’m genuinely worried – that’s a lot of steps to walk up. Their knees and calves must be SCREAMING.”

Oswalt, who is also writing Marvel Comics’ M.O.D.O.K. Head Games, would go on to retweet a number of individuals who injected divisive racial politics into the protest.

He retweeted George Wallace who wrote, “If those assholes looked like me they woulda been dead three times over before they got a mile from a Capitol balcony.”

Black Lives Matter Protests in Washington D.C. did erupt in the city and even lead up to the gates of the White House.

CNN Newsource reported that protestors turned violent and injured a number of Secret Service agents when they “flung rocks, urine and alcohol at them.” 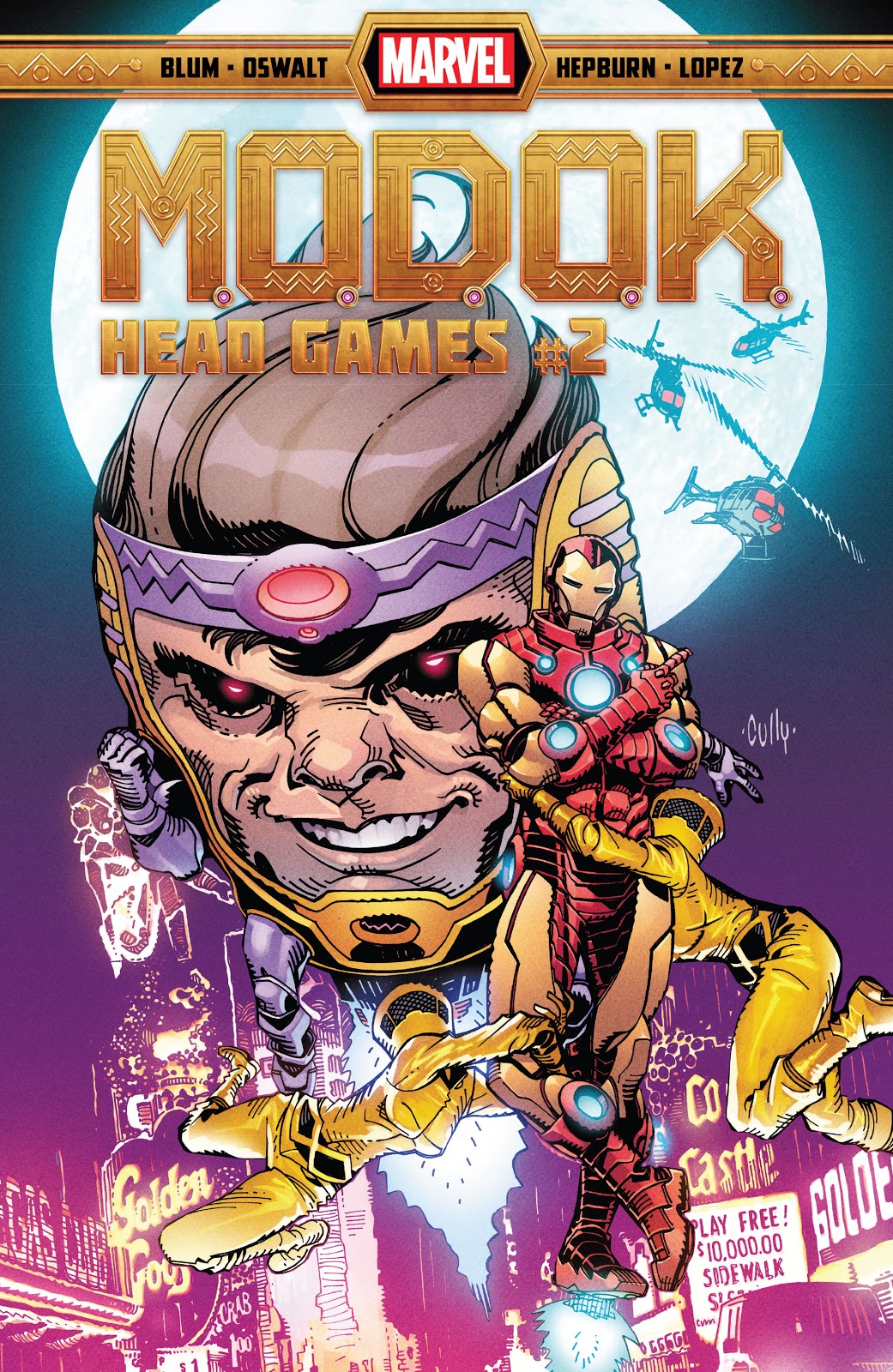 The Washington Post reported that “American flags and parked cars and buildinger were lit ablaze – including St. John’s Church, a historic landmark opened in 1816 and attended by every president since James Madison.”

They also reported that “baseball bats based through windows at coffee shops, banks, and one office building after another. Vandals and looters roamed throughout the city, scrawling graffiti and targeting dozens of businesses well after the mayor’s 11 p.m. curfew began.”

No deaths were reported.

He also retweeted Adam Serwer, who wrote, “If it weren’t a right wing militant group aligned with the president they’d be using live ammunition.”

The police would actually use live ammunition against one individual in the Capitol. Military veteran Ashli Babbitt was shot and killed by U.S. Capitol Police.

The police said, “As protesters were forcing their way toward the House Chamber where Members of Congress were sheltering in place, a sworn (U.S. Capitol Police) employee discharged their service weapon, striking an adult female.”

They added, “Medical assistance was rendered immediately, and the female was transported to the hospital where she later succumbed to her injuries. She has been identified as Ashli Babbitt.”

And he also shared Mikel Jollett’s tweet that reads, “The police will use teargas to disperse a peaceful gathering in front of a church so the president can have a photo op but they won’t use it to stop fascists who are literally storming the Capitol?”

Despite sharing easily disprovable misinformation, the actor would then take to Twitter where he wrote, “Shut down his goddamn Twitter feed and throw him in motherf***ing jail. NOW.”

Twitter reportedly did ban President Trump for 12 hours, but The Washington Post claims they lifted the ban Thursday morning.

Facebook would also announce they were banning the President as well.

Facebook founder Mark Zuckerberg announced, “The shocking events of the last 24 hours clearly demonstrate that President Donald Trump intends to use his remaining time in office to undermine the peaceful and lawful transition of power to his elected successor, Joe Biden.”

He went on, “His decision to use his platform to condone rather than condemn the actions of his supporters at the Capitol building has rightly disturbed people in the US and around the world. We removed these statements yesterday because we judged that their effect — and likely their intent — would be to provoke further violence.” 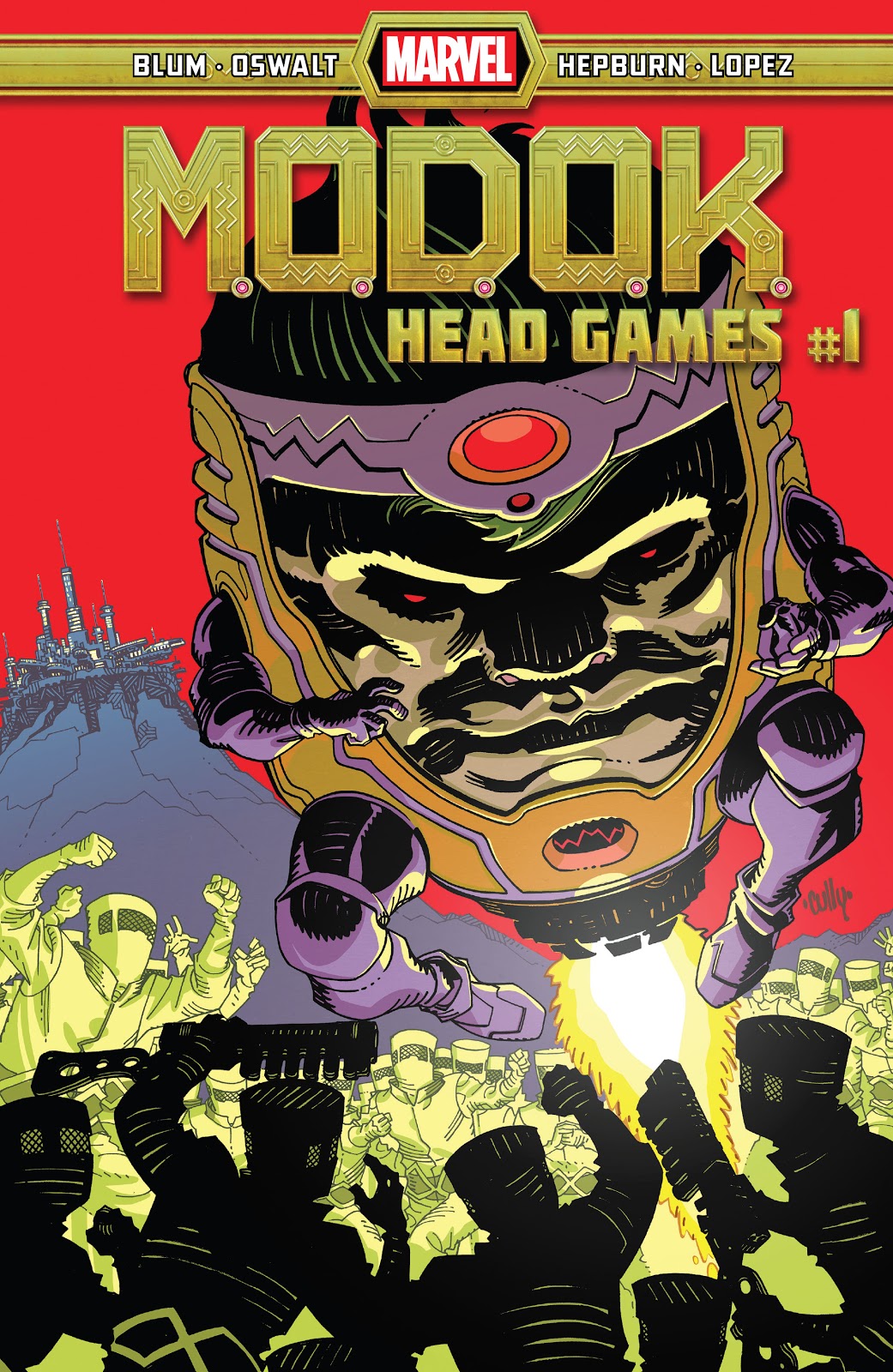 “Following the certification of the election results by Congress, the priority for the whole country must now be to ensure that the remaining 13 days and the days after inauguration pass peacefully and in accordance with established democratic norms,” he continued.

Zuckerberg then added, “Over the last several years, we have allowed President Trump to use our platform consistent with our own rules, at times removing content or labeling his posts when they violate our policies. We did this because we believe that the public has a right to the broadest possible access to political speech, even controversial speech. But the current context is now fundamentally different, involving use of our platform to incite violent insurrection against a democratically elected government.”

Finally he detailed they would be banning President Trump “indefinitely.

Zuckerberg stated, “We believe the risks of allowing the President to continue to use our service during this period are simply too great. Therefore, we are extending the block we have placed on his Facebook and Instagram accounts indefinitely and for at least the next two weeks until the peaceful transition of power is complete.” 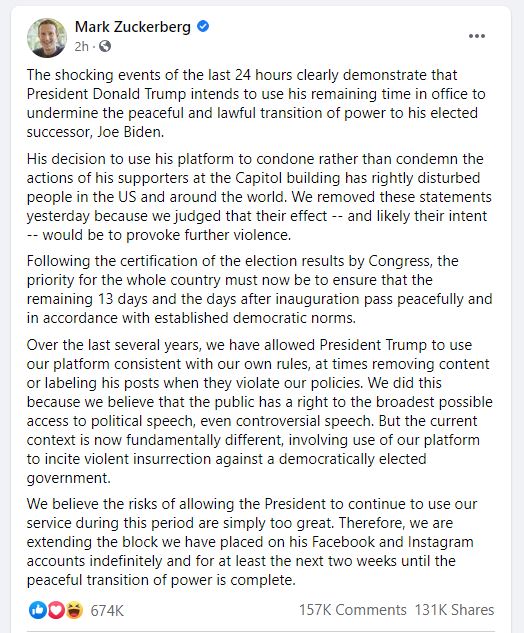 Omhar tweeted, “I am drawing up Articles of Impeachment. Donald J. Trump should be impeached by the House of Representatives & removed from office by the United States Senate.”

“We can’t allow him to remain in office, it’s a matter of preserving our Republic and we need to fulfill our oath,” she added.

Oswalt added a number of fingers pointing down emojis to the tweet. 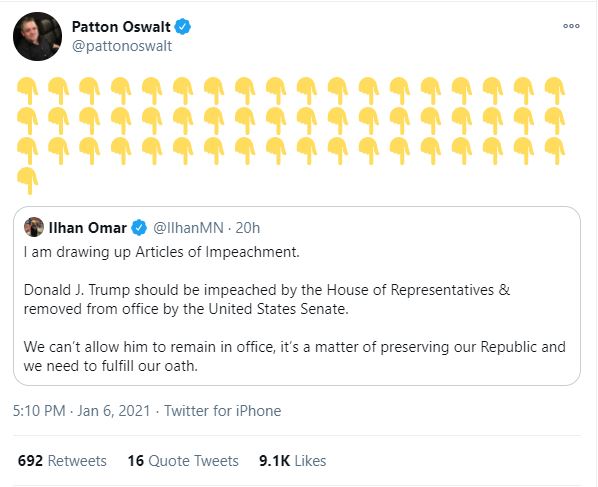 Bush wrote, “I believe the Republican members of Congress who have incited this domestic terror attack through their attempts to overturn the election must face consequences. They have broken their sacred Oath of Office. I will be introducing a resolution calling for their expulsion.”

She shared a draft that reads, “Directing the Committee on House Adminstration and the Committe on Ethics to investigate, and issue a report on, whether those Members of the House who have sought to overturn the 2020 Presidential election have violated their oath of office to uphold the Constitution or the Rules of the House of Representatives, and should face sanction, including removal from the House of Representatives.” 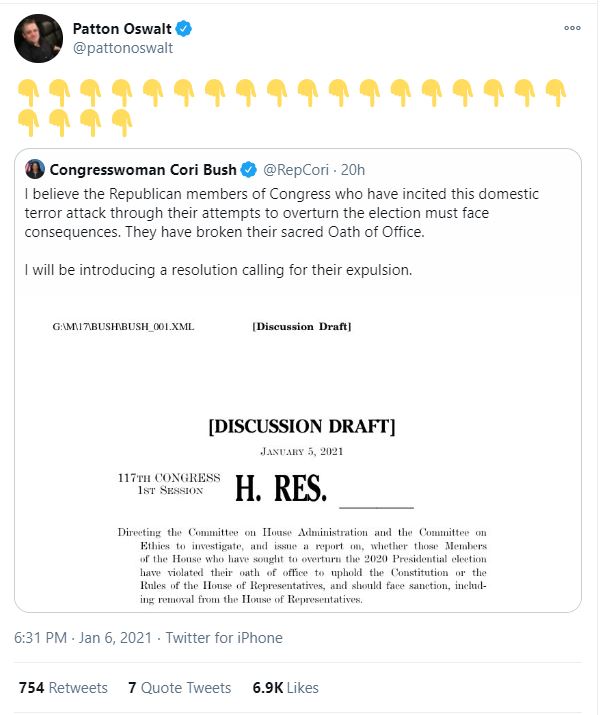 Oswalt then retweeted Bush who wrote, “My first resolution in Congress will be to call for the expulsion of the Republican members of Congress who incited this domestic terror attack on the Capitol.”

What do you make of Oswalt’s recent comments?