Twitch partner Critical Bard has claimed that a recent wave of pushback and criticism towards his history of anti-white racism and his assertion that “white lives don’t matter” is nothing more than the perpetuation of racism against himself.

The controversy began on January 11th when, as the first entry in Twitch’s experiment of temporarily cycling through a different variation of the now-retired PogChamp emote until a suitable replacement could be found, the platform chose a variant depicting Critical Bard making a close-approximation to the famous expression as that day’s unique option. 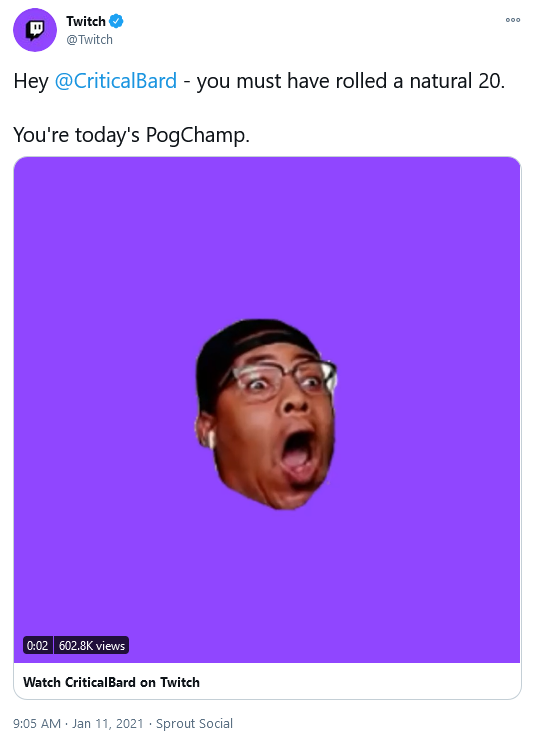 Shortly after being featured across the video game streaming platform, users began to dig into Critical Bard’s content history and discovered that the streamer had a lengthy and explicit history of anti-white racism.

“I. Do. Not. Care. About. Your. White. Feelings,” asserted Critical Bard in July 2020, responding to the various criticisms levelled against the violent protests that gripped the United States last summer.

He added, “I don’t. I refuse. Don’t come on my damn page with some “BUT I’VE SEEN A GOOD COP BEFORE” bullshit. Don’t come around with no devil’s advocate mess.” 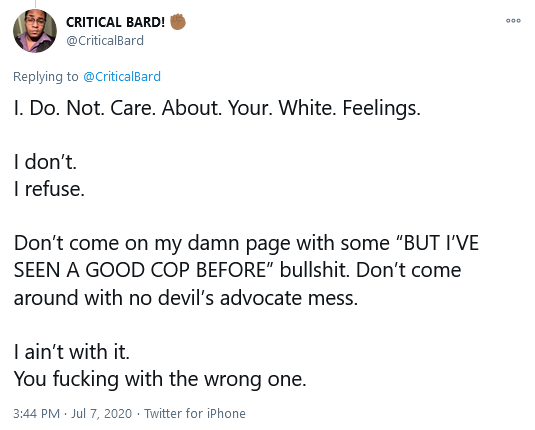 In September 2020, when another Twitter user pushed back against Critical Bard’s stereotypical assertion that white people do not season their food, the Twitch partner declared that “you can’t be racist against white folk (or white stereotypes).”

“If you take offense, that’s on you,” he wrote. 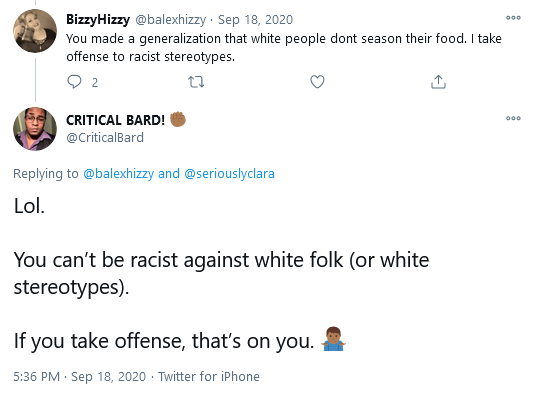 After receiving further criticism for his statement, Critical Bard added that “You canNOT be racist toward white folk as racism is a systemic disadvantage based on race & white folk will ALWAYS have the advantage.”

“You can, however, be PREJUDICED,” declared Critical Bard. “Learn the difference.” 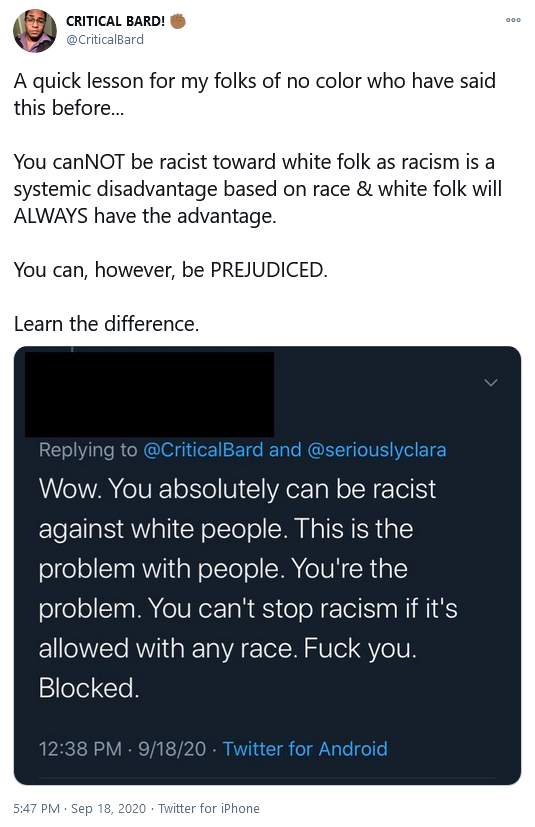 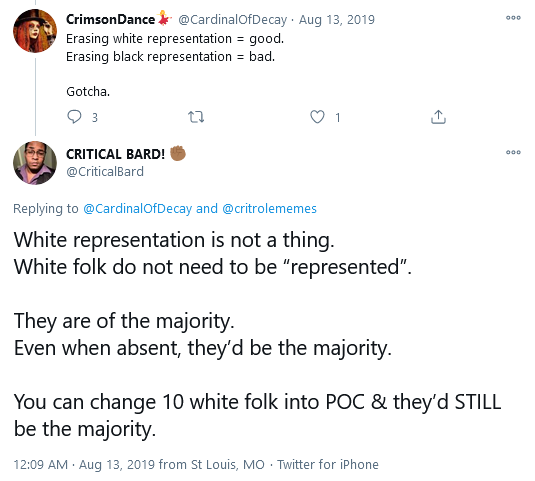 When presented with screenshots of his past tweets, Critical Bard laughed at how “These whites think they are really doing something but making a collage jn MS Paint about my feelings THAT I STILL STAND BY” and encouraged his critics to “stay mad.” 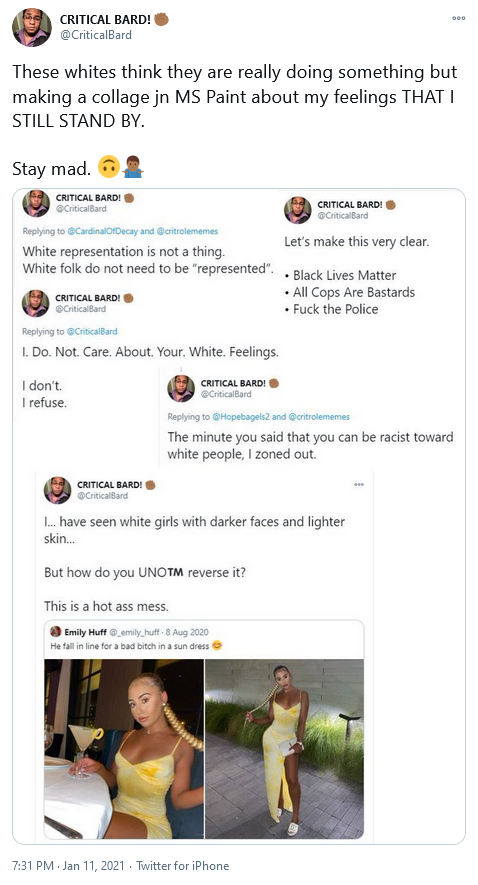 Yet, despite this evidence that users were specifically concerned with his racist attitudes, Critical Bard disingenuously described the backlash as being solely orchestrated by “racists, bigots, and pressed dudebros mad that a black queer man is the current face of PogChamp.” 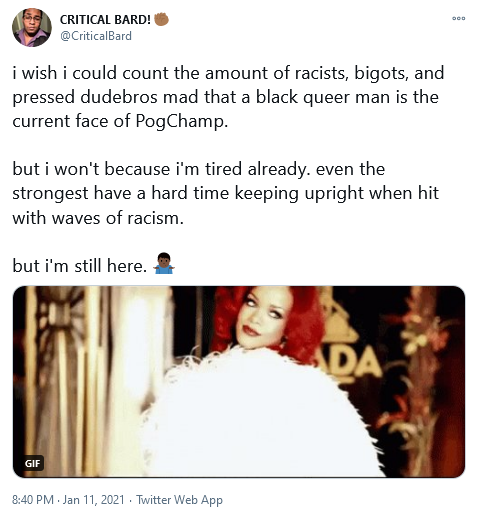 As the backlash and criticism of his anti-white sentiments continued to mount, Critical Bard explained in a Twitch stream hosted the same day he was featured as PogChamp that his rhetoric did not violate the platform’s goal of only featuring “PogChampers who don’t say bad things” because, unlike Ryan “Gootecks” Gutierrez, his comments were directed towards a narratively acceptable group.

“Totally not the same,” he stated. “I’m not condemning an entire people and defending insurrectionists and people who did some headassery. I’m saying that when you say, “white lives matter” they don’t and I’ll say that again whether I’m a Twitch Partner or not just so you know. “White lives” don’t matter because “white lives” aren’t a thing.”

“On the flip side, black folk have to say, “black lives matter” because we were stolen from a country that we loved and were forced to be here stripped of our heritage and our identities all we know is our ‘blackness’,” he continued. “There’s a difference between saying “black lives matter” and “white lives matter.”

Following this stream, the above clip of Critical Bard’s comments began to make the rounds on social media, though the streamer’s followers were quick to accuse those sharing the clip of engaging in targeted harassment. 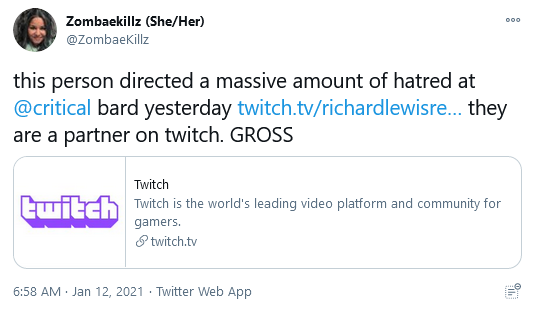 Taking note of this accusation, Lewis proceeded to ask Zombaekillz if she could identify where he directed “hatred or harassment at anyone” and if she could provide “some specific examples so I can atone for these very real transgressions.”

In response, Zomebaekillz simply cited his sharing of the aforementioned shortened clip and stated “there is your example.” 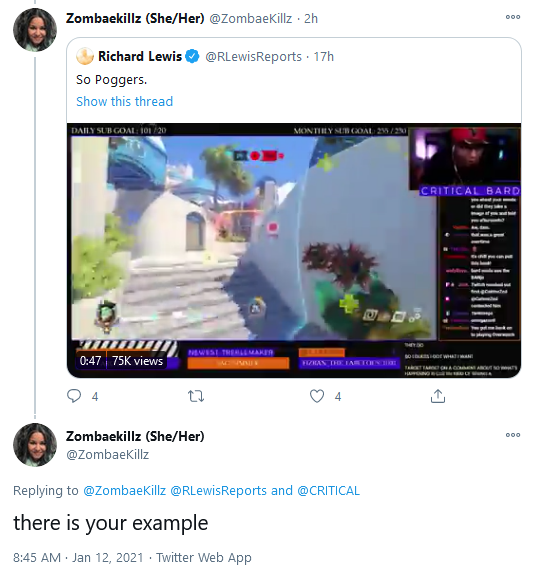 “I shared an already viral clip,” noted a confused Lewis, who further asked, “Can you explain where the harassment or hate is? Educate me.”

However, it appears that Zomebaekillz’s accusation was based merely on conjuncture and assumption, as the streamer responded “with your massive audience.. come the f*** on. dont play coy . your bio alone [specifically a joke made by Lewis that “Gamergate was my Vietnam”]  proudly declares you a bad actor.”

She then told telling Lewis to “get the f— off my tweet.”

Later in the day, with his time as PogChamp drawing to a close, Critical Bard warned “future PogChamps” that “these folk will twist anything you say into making you look like a villain in their privileged story.”

“ESPECIALLY if you are marginalized, he concluded. “Just be careful.” 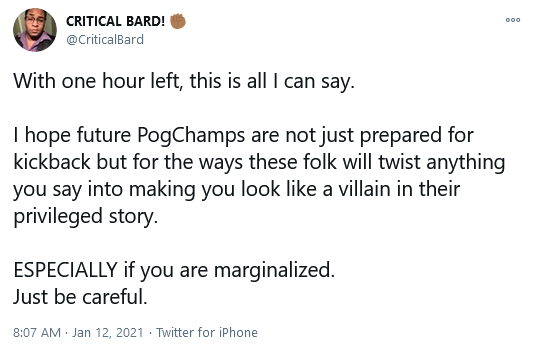 As of writing, Twitch has yet to publicly address the PogChamp-related controversy.

What do you make of Critical Bard’s opinions? Let us know your thoughts on social media or in the comments down below!