FandomWire writer and Popcorned Planet host Andy Signore has been threatened with not just physical violence, but outright castration, for his defense of Gina Carano in the wake of the official Star Wars Twitter account’s recent statement against “bullying”.

On January 22nd, following the backlash received by newly announced Star Wars: The High Republic host Krystina Arielle regarding her history of anti-white social media posts, the official Star Wars account tweeted a statement of support for their latest team member, announcing that “Our Star Wars community is one of hope and inclusivity. We do not stand for bullying and racism. We support @KrystinaArielle.”

However, Signore was quick to point out the hypocrisy of the Star Wars brand, noting that he had “never heard of Krystina”, but was “confused where your tweet of support for @ginacarano was”?

“She’s been endlessly bullied for things she’s never even said,” recalled Signore, referencing the numerous insults and calls for cancellation that have been levelled towards The Mandalorian actress over her disagreement with politically liberal social trends. “Stop picking favorites and be truly inclusive by supporting ALL your talent equally no matter who they vote for ✌🏻♥️.” 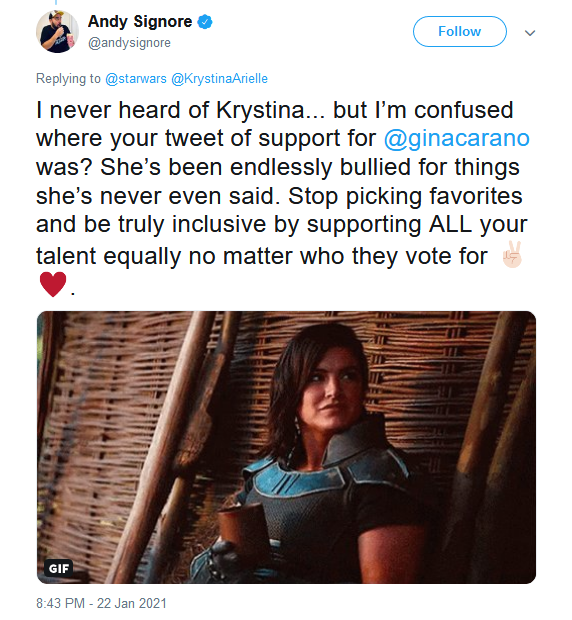 Signore would then proceed to share a number of collages, originally put together by Twitter user @DataRacer117, which collected various social media posts directing hate and vitriol towards Carano for her aforementioned disagreements.

In response to one such collage, Twitter user Eva Cantor (@PoRiverJamBand) asserted that “That’s a cool thread of shit she deserved for being a dipshit conspiracy theorist and a bigot.”

“Talk s–t, get s–t,” Cantor added. “Maybe Gina needs to grow some f—ing skin and she wouldn’t have had to f— off to Parler which, oh, hey, got shut down because it was full of f—ing Nazis lmao.” 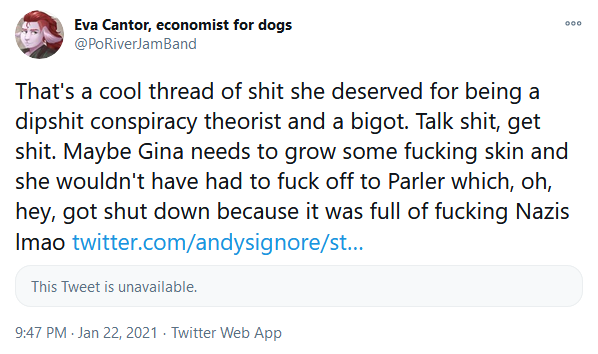 Asking Signore if he was going to “do this Gamergate s—t” and if his defense of Carano was “the way you want to show your dick to the world,” Cantor then threatened that “a lot of us have been around this block, c—” and declared that “we’re carrying f—ing bolt cutters this time.”

“So dick out, boy,” Cantor ordered. “Defend your f—ing Nazi.” 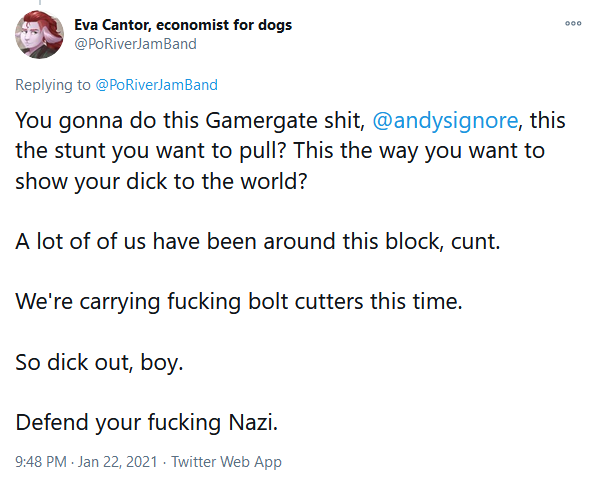 Turning her attention to the general Star Wars, particularly those who disagreed with Arielle’s racist rhetoric, Cantor then declared that “if they’re going to do GamerGate 2.0 or whatever” then “the only correct response is unmitigated brutality.”

“The first time, they built careers and lives pulling that shit,” she wrote. “These people need to learn fear. It needs to be a bear trap they cannot pull out of.” 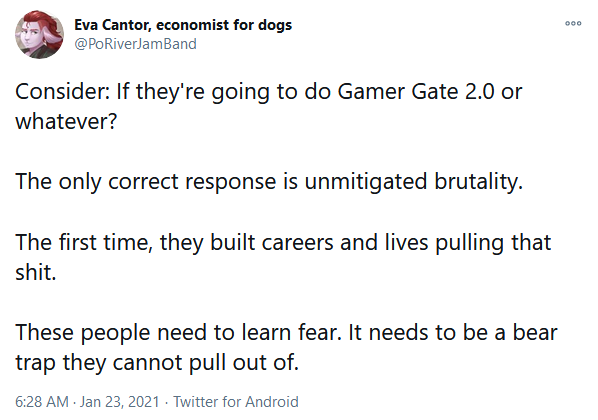 Cantor then called for ‘cruelty’ against her ideological opponents, declaring that it was time for those who learned “the skillsets of anti-fascism and community defense” to “put them into effect.”

“Just cruelty must be wielded against the unjustly cruel,” declared Cantor. 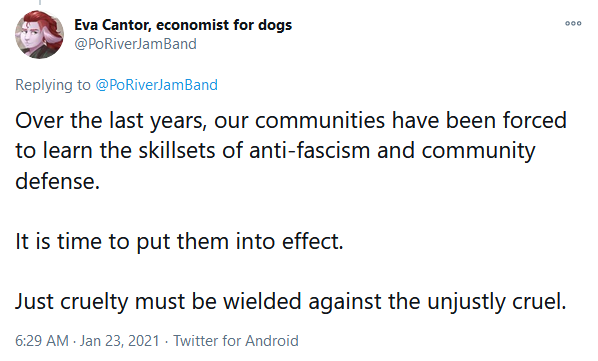 What do you make of Cantor’s words? Let us know your thoughts on social media or in the comments down below!