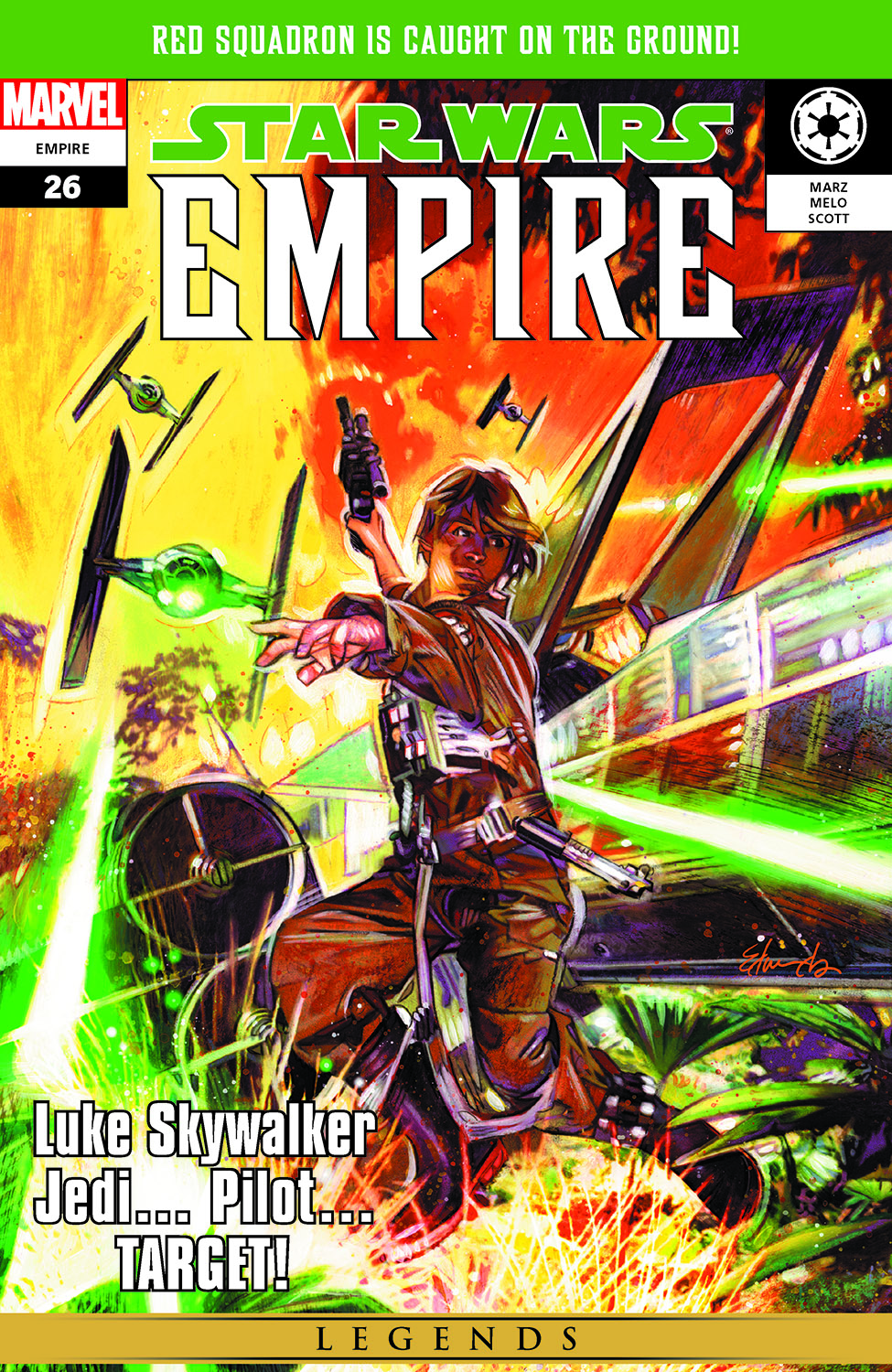 Marz’s comments came on Twitter when he was reacting to an article from The Daily Beast’s Jamie Ross titled “Hawaii Republican Official Quits Over Much-Mocked ‘QAnoners Just Love America’ Tweets.”

Ross writes in the article that “Hawaii GOP vice Chair of communications Edwin Boyette wrote an apologetic Facebook post to note his resignation and to say ‘the discussion of the Q-Conspiracy was an error in judgement.'”

To provide further context, not shown in The Daily Beast article, Boyette posted to the official Hawaii GOP account, “We should make it abundantly clear – the people who subscribed to the Q fiction, were largely motivated by a sincere and deep love for America. Patriotism and love of Country should never be ridiculed.” 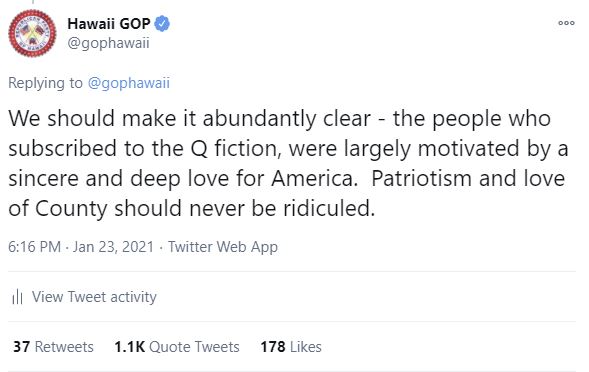 In a Facebook post explaining the tweet, Boyette wrote, “Americans are getting trapped in bad patterns. People are ready to believe the worst about their neighbors.”

“I made post examining the roots of the Q – theory, it references a document from one of the initial group who were responsible for creating Q,” he continued.

Boyette then stated, “Left wingers on twitter went into fits because I refused to condemn or ridicule people who subscribed to Q theories. As far as I can see there is no shortage of material mocking and ridiculing those who followed Q over the past two year. The Q movement grew even faster…” 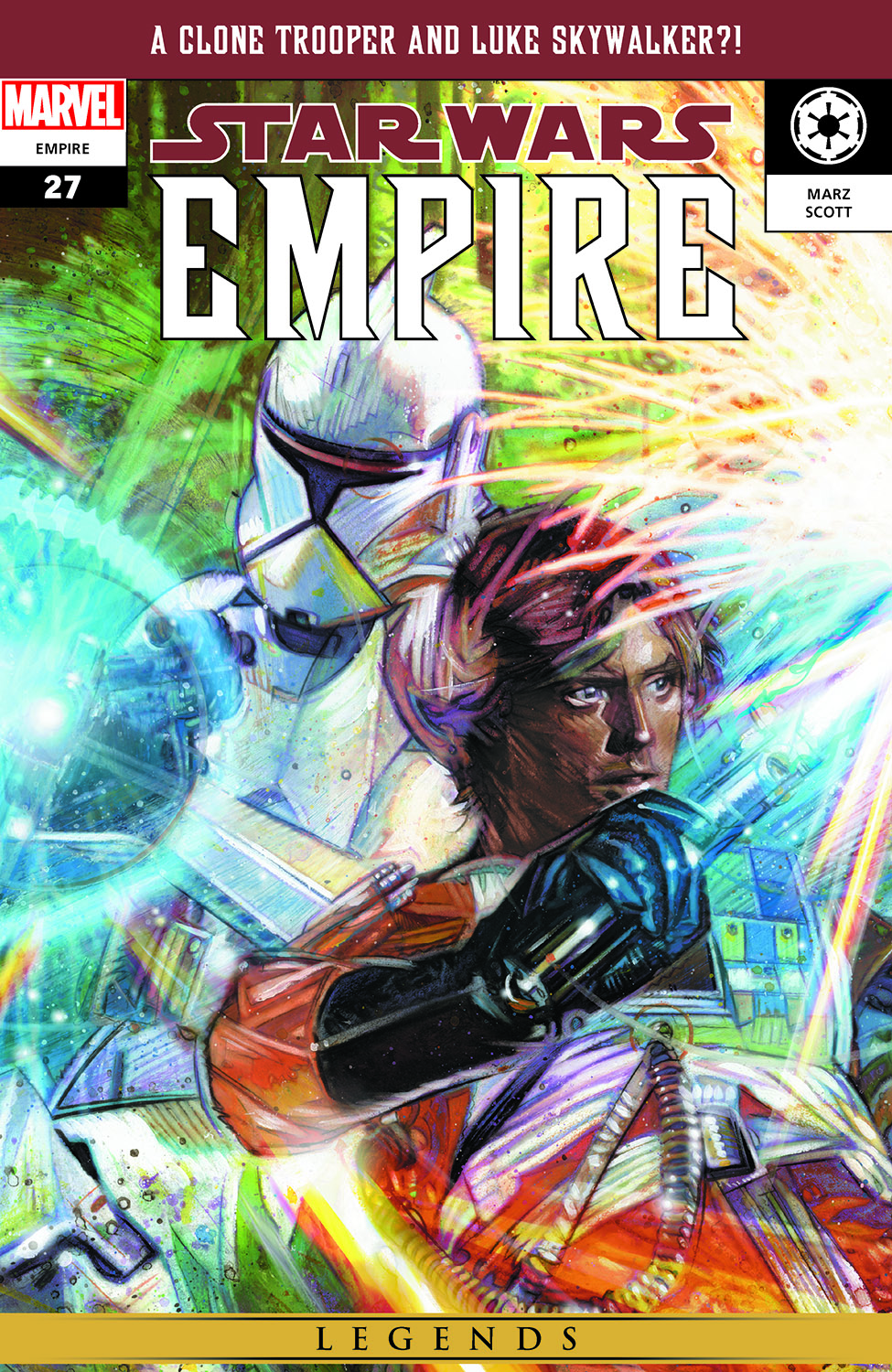 He then added, “As a country we are currently stuck in a escalating feedback loop where Americans are being pitted against each other. Social media amplifies this – people would rather fight any fight or argue any argument rather than deescalate and let reason prevail.”

Finally, Boyette concluded, “Be very careful about anyone who seeks to enflame your passion, most of the things that maintain and build our great country are done with deliberation and calm clear work. Rage and overwrought anger rarely achieves anything good.” 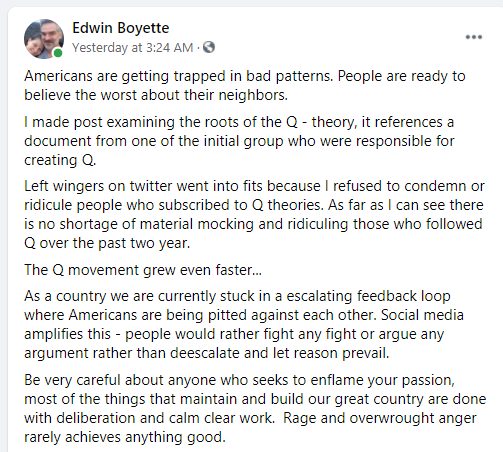 He wrote, “Today I gave my resignation as Vice Chair for Communications for the Hawaii Republican Party. I will be off social media for a few days mahalo.”

The letter specifically reads, “Chairman Ostrov, Thank you for the opportunity to serve the Republican Party of Hawaii, and the People of Hawaii. Discussion of some topics is ill suited to the forums of social media, and regardless of intent – only serves to increase conflict and discord.”

It concludes, “The discussion of the Q-Conspiracy was an error of judgement, and should not reflect upon the leadership or the members of the Republican Party of Hawaii. The responsibility for that discussion and that error is mine and and mine alone. Please accept my resignation for the good of the Party.” 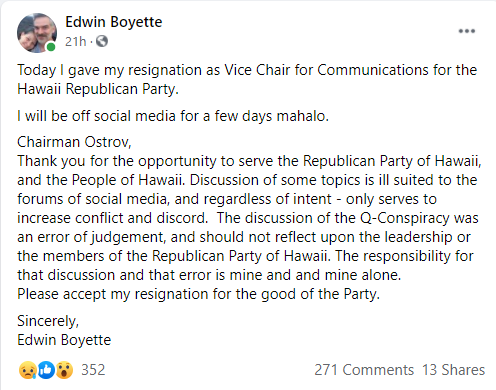 Marz responded to The Daily Beast article writing, “Unless I am much mistaken, this is the same Edwin Boyette who was an extremely vocal Comicsgate supporter. Comicsgate, QAnon and GOP official, quite the trifecta.”

Of note, Boyette never claims to be a follower of QAnon, in fact in the tweet from the Hawaii Republican GOP account it’s described as “Q fiction.” 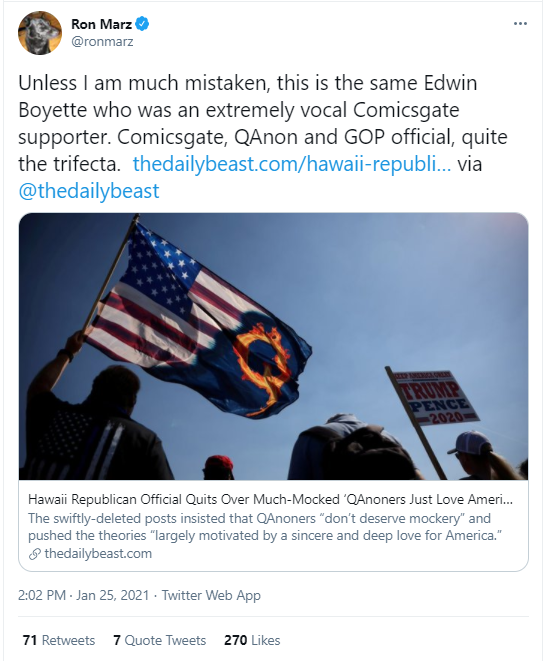 Nevertheless, Marz would continue his thoughts in a subsequent tweet.

He wrote, “‘Okay, so let me get this straight, the government is secretly controlled by Satan-worshipping, blood-drinking pedophiles. Do you have any other theories we should be aware of?'” 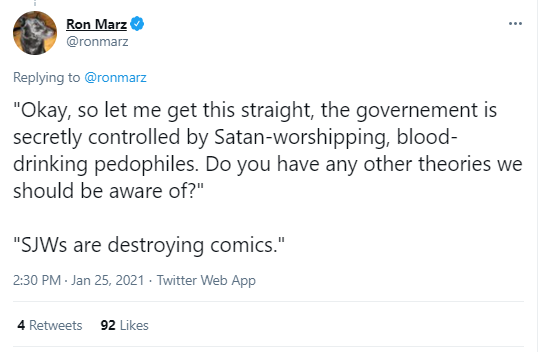 Then in a third tweet, Marz declared, “Comicsgate, Gamergate, QAnon, MAGA: it all comes from the same place.”

He continued, “The world is changing rapidly, and there’s a segment of the population — chiefly white, straight males — who can’t handle it, and their brains are melting.” 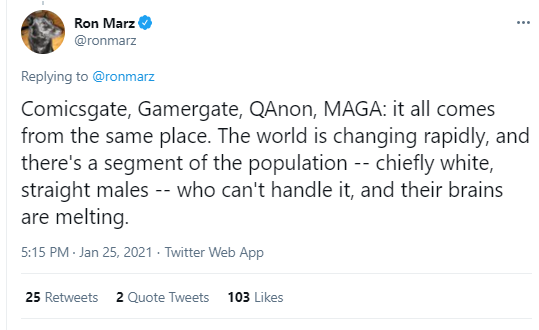 What do you make of Marz’s comments regarding “white, straight males?”