The official The Walking Dead (TWD) Twitter account has asked for fans to unfollow them over LGBTQ+ characters.

The account posted to Twitter on January 25th. The post reads, “Hi, hello. If LGBTQ+ characters on television (or anywhere) make you uncomfortable or angry, please unfollow us.”

It continues, “While we also encourage you to look within and be more accepting, know that there is no place in our fandom for hateful discrimination or willful ignorance. Thank you.” 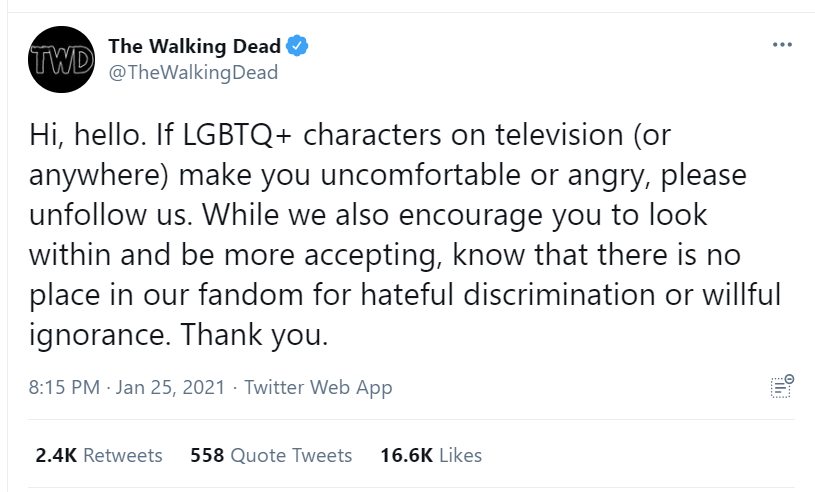 The statement comes a day after the account shared new screenshots of the upcoming The Walking Dead: World Beyond show featuring actor Jelani Alladin as Will Campbell embracing Nico Tortorella’s Felix Carlucci. 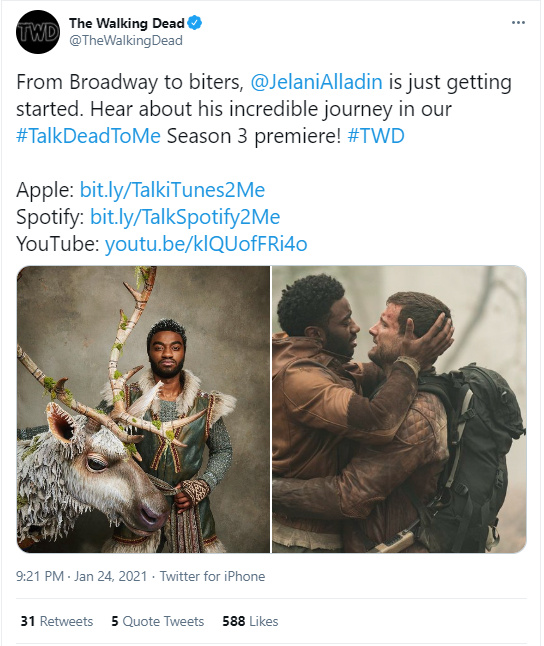 Bradleyystuard got into a back and forth with the official TWD account after he wrote, “Way to keep shoving homosexual propaganda down our throats, just to fulfill an agenda. Dance for me puppets.” 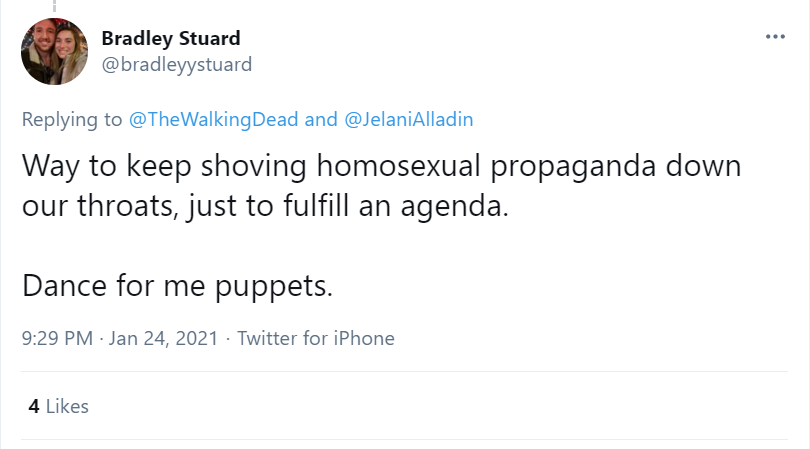 In a subsequent tweet, the user wrote, “A show once about survival and zombies, is now about gay sex and politics.”

The TWD account responded to the original tweet writing, “People can’t help who they love, Bradley, but it’s never too late for YOU to change how you feel about them. There’s no room for hate or discrimination in TWD fandom.” 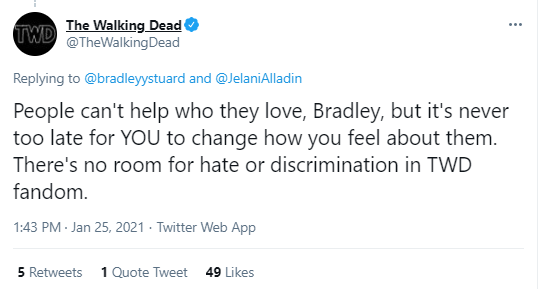 Stuard would respond, “So my opinion is automatically hate/discrimination but you don’t agree with it? Sounds about right.”

The TWD account then stated, “Well, yeah. It’s not ‘just wrong’ for someone to love someone of the same sex. It’s 2021, Bradly. Tolerance might actually look good on you.”

Stuard then stated, “Yeah and the years have only gotten s****er since this bulls*** became okay. You’ve been brainwashed. All to fill government agenda. Next thing you know we will be marrying Ferris wheels and identifying as attack helicopters. Oh wait..” 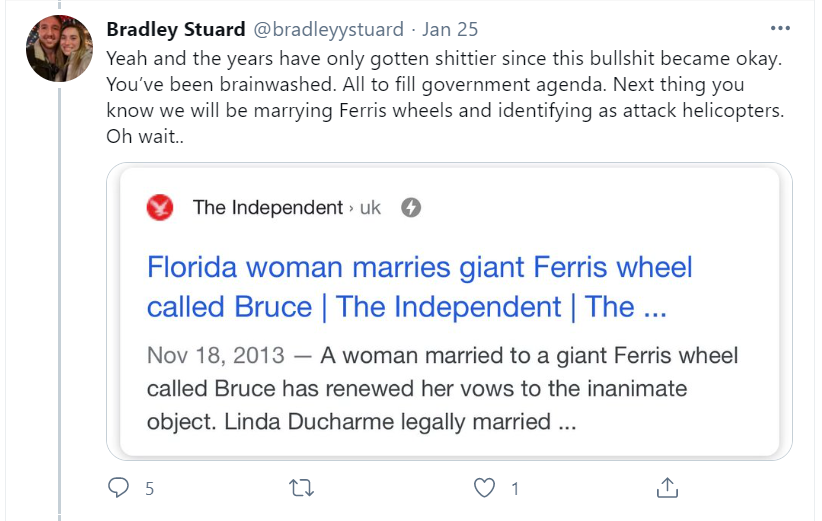 They wrote, “Ah, the classic homophobic attack helicopter argument, really original. Idk how to break this to you, but equating humans with inanimate objects is moronic. Anyway, enjoy your block, and please educate yourself on people different than you.”

The statement for the show’s fans to unfollow them also comes amid the show’s declining ratings for Season 10 on AMC.

When Season 10 premiered all the way back in October 2019, TV Series Finale reports it debuted to an audience of 4 million viewers with a 1.44 rating in the 18-49 demographic.

The most recent episode which debuted on October 4, 2020 saw the ratings in the 18-49 demographic slip to .87 and overall viewership drop to 2.7 million. 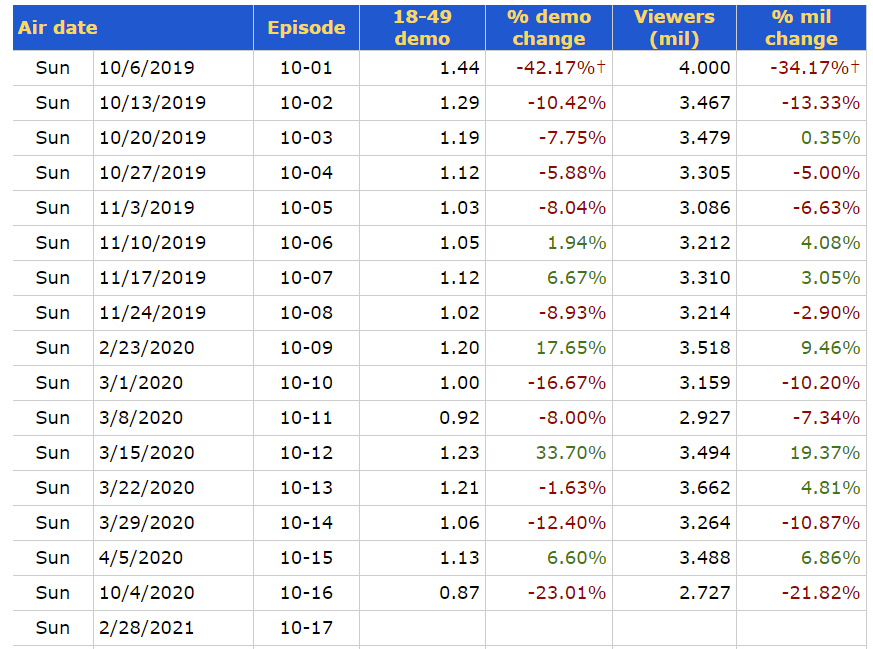 That’s a huge decline. The 18-49 demographic rating declined almost 40% and the total viewership declined by just over 30%.

In fact, that’s the lowest rating and viewership the show has seen in its entire 10 season run.

As for The Walking Dead: World Beyond, the show premiered back on October 4, 2020. It debuted with a .49 rating in the 18-49 demographic and was watched by 1.595 million viewers according to TV Series Finale.

However, by the show’s 10th and final episode of the season ratings had tanked to .15 and viewership was down to just a mere 618,000 viewers. That’s an over 60% decline in viewership and nearly 70% decline in the ratings.

There is no current release date for Season 2 of The Walking Dead: World Beyond. The series was only planned for two seasons and is not expected to have a third.

Showrunner Matt Negrete explained to EW, “Yeah. It’s just a different format for us. The thing about World Beyond, it was always about how can we make this feel different? How can we support expectations in a lot of ways? And one of those is not having it necessarily be open-ended.”

He continued, “I’m kind of two minds about it, because right now we’re breaking episode 7 of season 2 with the writers, and we’ve all fallen in love with these characters. So I think for all of us, we feel like we could write these characters forever. But, at the same time, it’s nice to be able to approach a series from beginning to end kind of knowing what our ending is going to be and working towards that ending.” 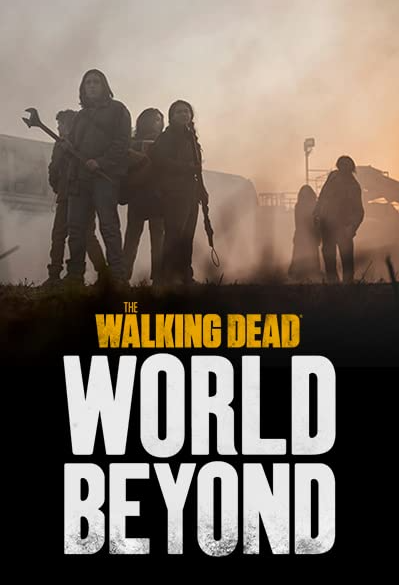 “It’s not like, “Oh, we’ll see what happens in season 6,” or whatever. We’re going to go two seasons. It’s going to be 20 episodes total. It’s challenging, because there’s a lot we need to fit in those 20 episodes,” Negrete added.

The showrunner then stated, “But, at the same time, it’s great to approach it knowing what you’re working towards. So we’re really looking at these two seasons as two very different feeling chapters of hopefully a very satisfying book.”

He then concluded, “We’re closing in right now with the writers on the last few episodes. So we’re getting down to the wire. It’s exciting. I hope people dig it.”