Popular streamer Tyler “Ninja” Blevins has come under fire for asserting that it is not his duty to educate his younger audience members on such serious social concepts as “racism” or “white privilege,” but rather that responsibility belongs to their parents. 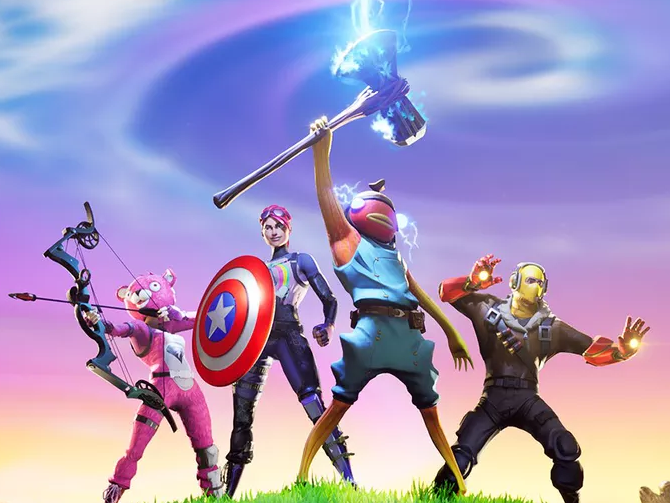 Ninja shared his opinion on the topic during a recent interview with The New York Times, first touching upon the subject when asked by staff writer David Marchese if “being watched live for hours day after day by tens of thousands of people while you’re playing a video game” had an effect on the streamer’s “sense of self.”

“Streaming makes you super self-conscious,” Ninja explained to Marchese. “If I didn’t have my wife and my family to talk to — everyone’s like, ‘Don’t listen to what people say.’ All right, but when you’re reading ‘You suck [expletive]’ 20 times in a chat, it’s going to get in your head.” 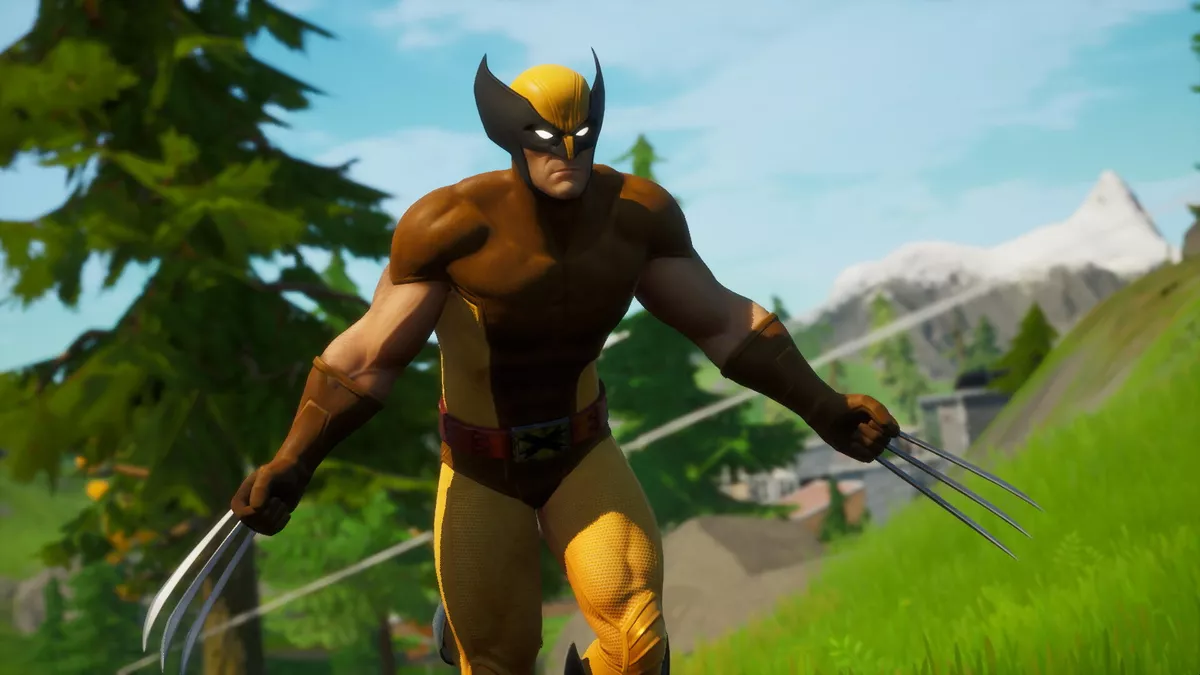 When asked by Marchese if these instances of immature insults were “just a part of gaming that you’ve resigned yourself to” and if such vulgarity could “be mitigated somehow,” Ninja asserted that it was not “gaming,” but “internet culture” at large that encouraged such behavior.

“People are behind the screen,” the streamer explained. “They say what they want and can get away with it. You have complete anonymity. Your information and data are precious and should remain private, but it sucks that there are kids who can say racist things and be incredibly aggressive and threatening to women online and have zero repercussions.”

“But it all comes down to parenting,” he added. “You want to know who your kid is? Listen to him when he’s playing video games when he thinks you’re not.” 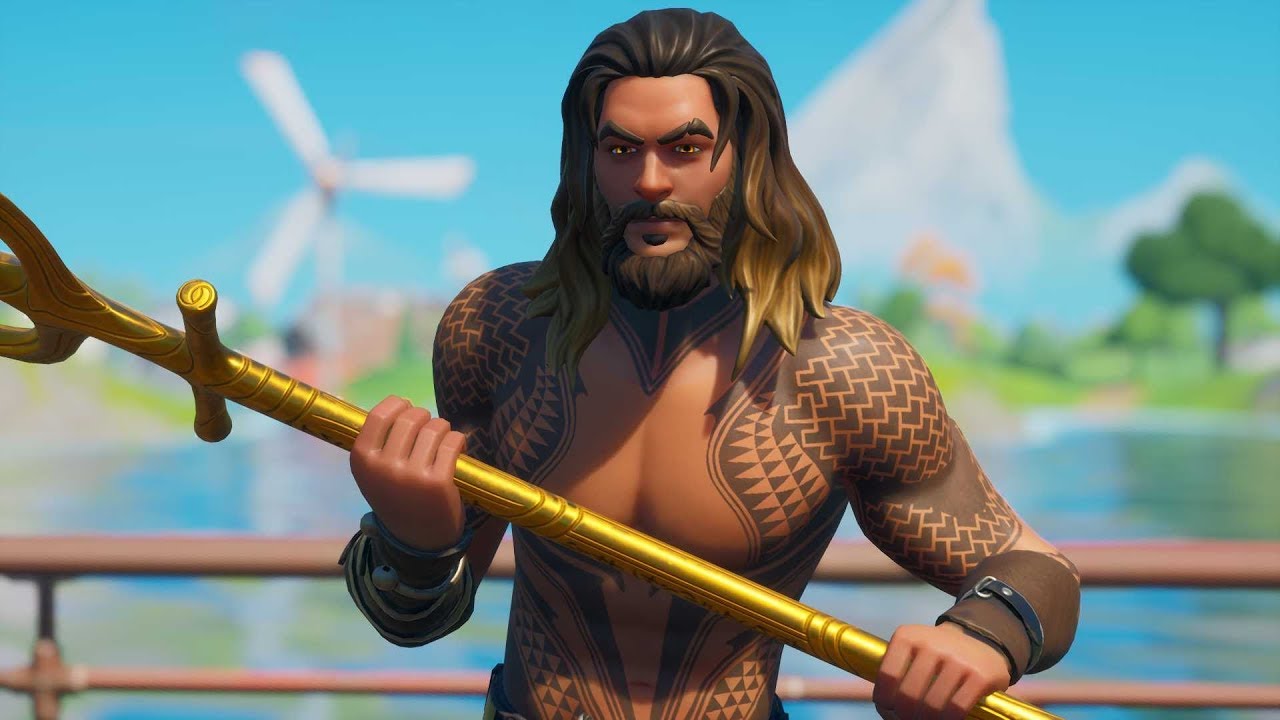 The streamer then turned to the topic of racism, asking Marchese “How does a white kid know he has white privilege if his parents never teach him or don’t talk about racism? If they’re gaming and their first interaction with racism is one of their friends saying the N-word and they have no idea what it is — what if it was on my stream?”

He continued, “Is it my job to have this conversation with this kid? No, because the first thing that’s going on in my head is, This kid is doing this on purpose to troll me. If someone says a racial slur on someone else’s stream, it can potentially get that streamer banned. It’s awful, but that’s the first thing I think of.” 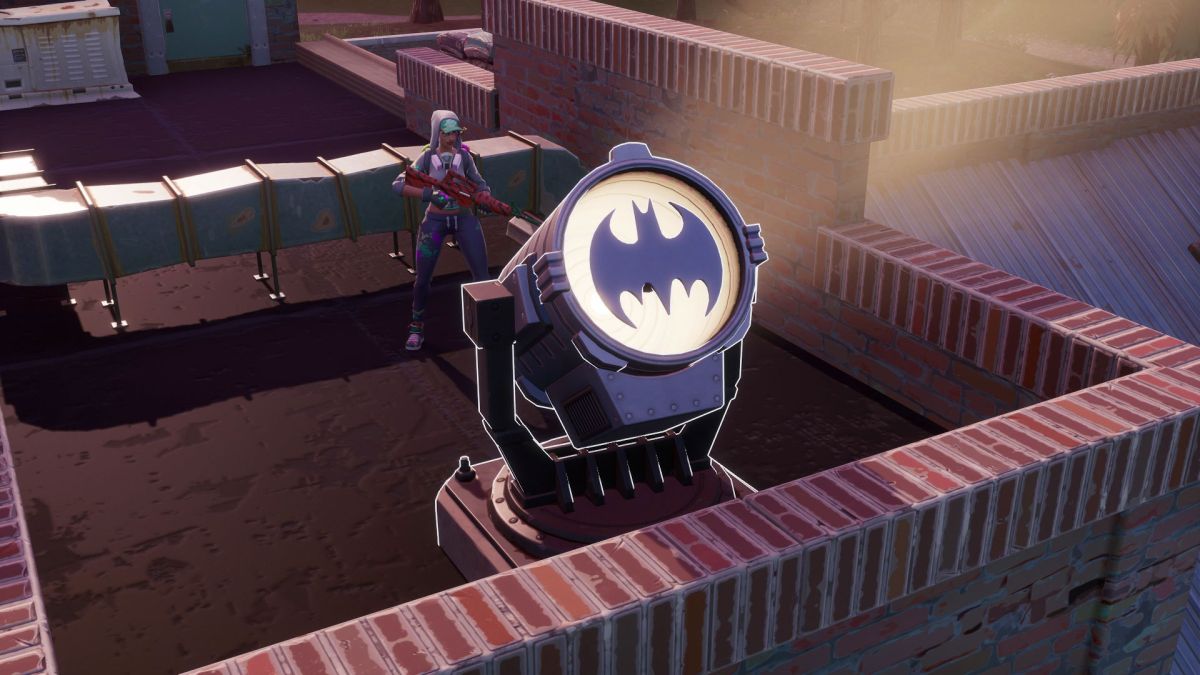 “Streamer or not, it’s 100% your job as a cisgendered, white, straight man to educate *your audience/ppl around you* when possible on racism & white privilege (+sexism/homophobia/transphobia) because those issues are HISTORICALLY & SYSTEMICALLY cis/het/white men’s fault,” argued Twitch streamer and founder of the failed Bullyhunters organization Natalie “ZombiUnicorn” Casanova. 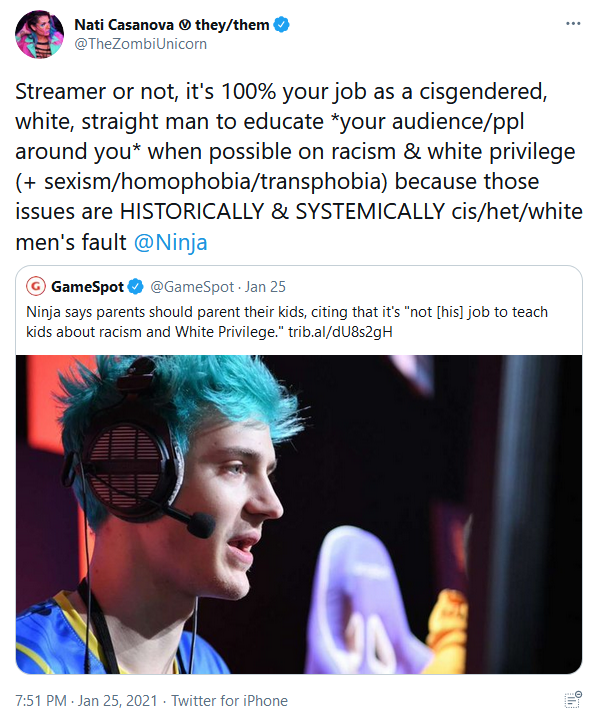 “You can leave deeper conversations about serious social issues to parents, but the BARE MINIMUM for cisgendered heterosexual white men is to acknowledge those issues and openly be against them,” Casanova further berated Ninja. “White men throughout history created these problems, they are responsible for them.” 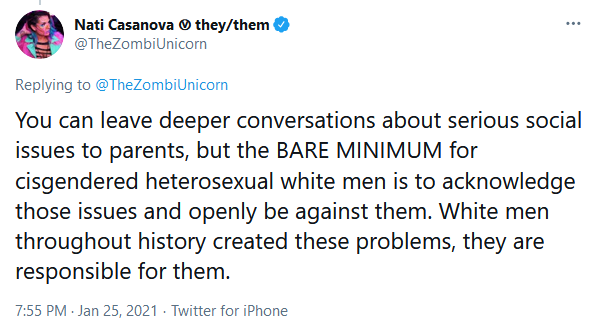 Casanova would conclude her message to Ninja by stating, “You know who’s job it ISN’T to educate others about racism & white privilege in the US? Black folx.”

“They are the ones whove been systemically and historically oppressed, they don’t owe anyone anything,” said the streamer. “Cishet white men need to step up and work to reverse their ancestors’ harm.” 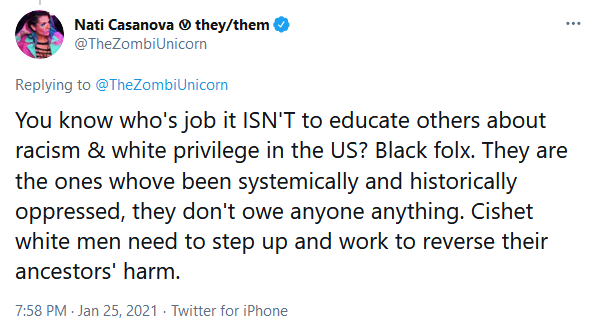 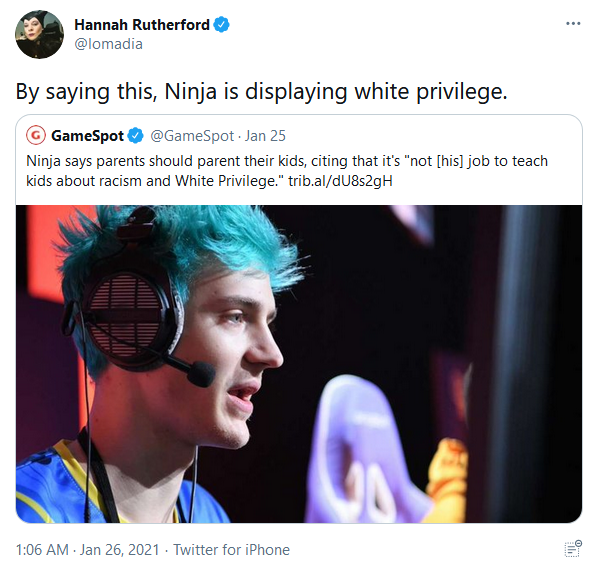 “Hey @Ninja, you’re quite right when you say it isn’t your job to teach kids about racism and white privilege,” wrote Super Delux Games Cast creator John Phipps. “You have a platform of millions from an audience with plenty of both, which makes it your f—ing responsibility.” 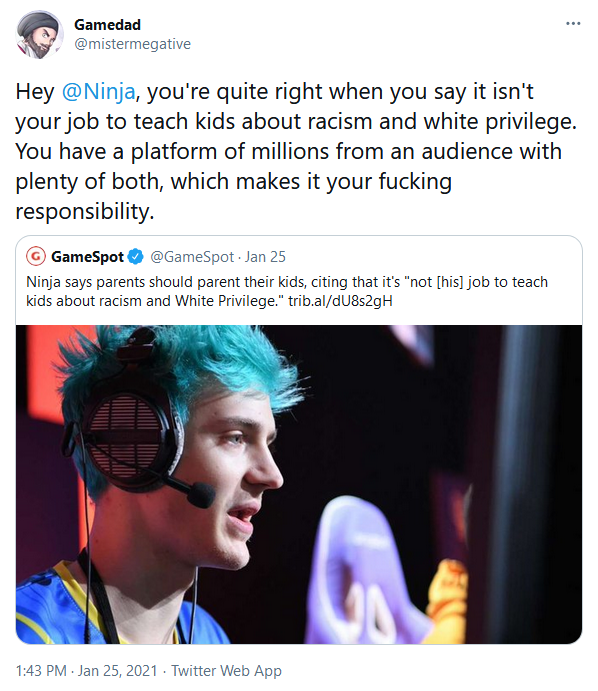 However, despite this storm of backlash, Ninja has remained adamant in his position.

In response to a now deleted tweet, Ninja informed one critic, “It is not my job to sit down and make a video with all of my audiences and do a lesson on civil rights and how to not be a racist. I show that I am a good person through my actions and how I treat people and those around me, every. Single. Day.”

Ninja also received support from his wife and manager, Jessica Blevins, who refuted the numerous criticisms against her husband by noting how “If ANY of these people tweeting actually watched Ninja stream, they’d know how many times he’s spoken out about issues of racism, white privilege, and having zero tolerance for racism in his games or channel.”

“He does his part,” she wrote. “He just isn’t holding a seminar on the topic.” 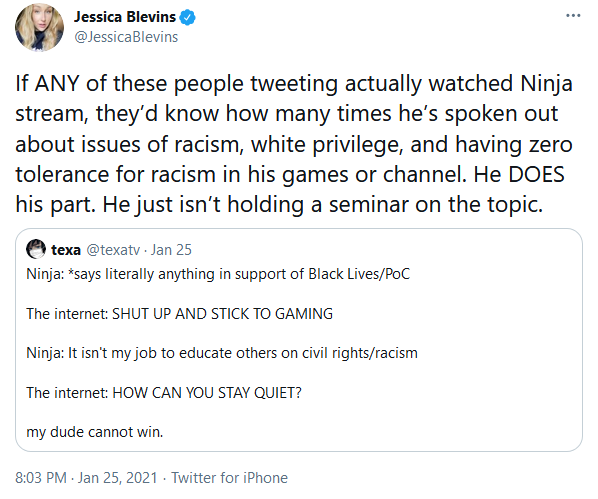 What do you make of Ninja’s opinion? Let us know your thoughts on social media or in the comments down below!