In honor of Black History Month, Wizards of the Coast has announced the release of Black Is Magic, a Magic: The Gathering Secret Lair Drop focused on “diversity”, “inclusion”, and “equity.” 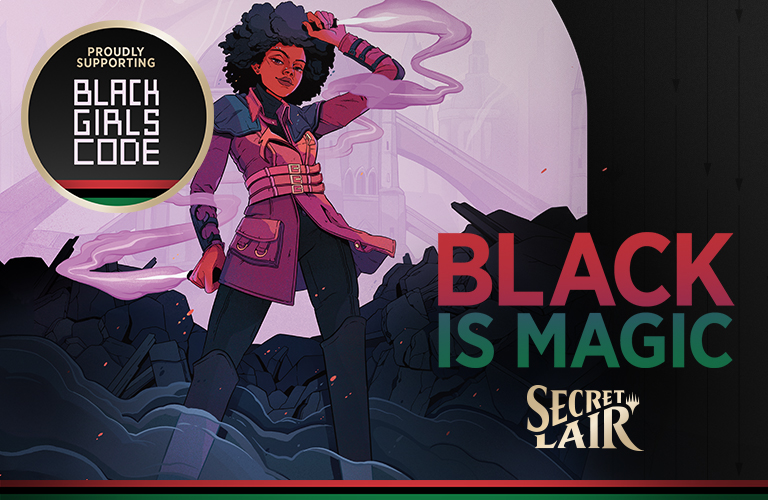 Related: Wizards Of The Coast Claims They Will Not Censor Magic: The Gathering For Foreign Regions

First revealed on February 4th and personally introduced by Wizards of the Coast’s first director of diversity, equity, and inclusion Jontelle Leyson-Smith, the newly revealed Secret Lair drop Black is Magic is part of the table-top company’s goal of incorporating “diversity, equity, and inclusion into our company culture, processes, and products”. 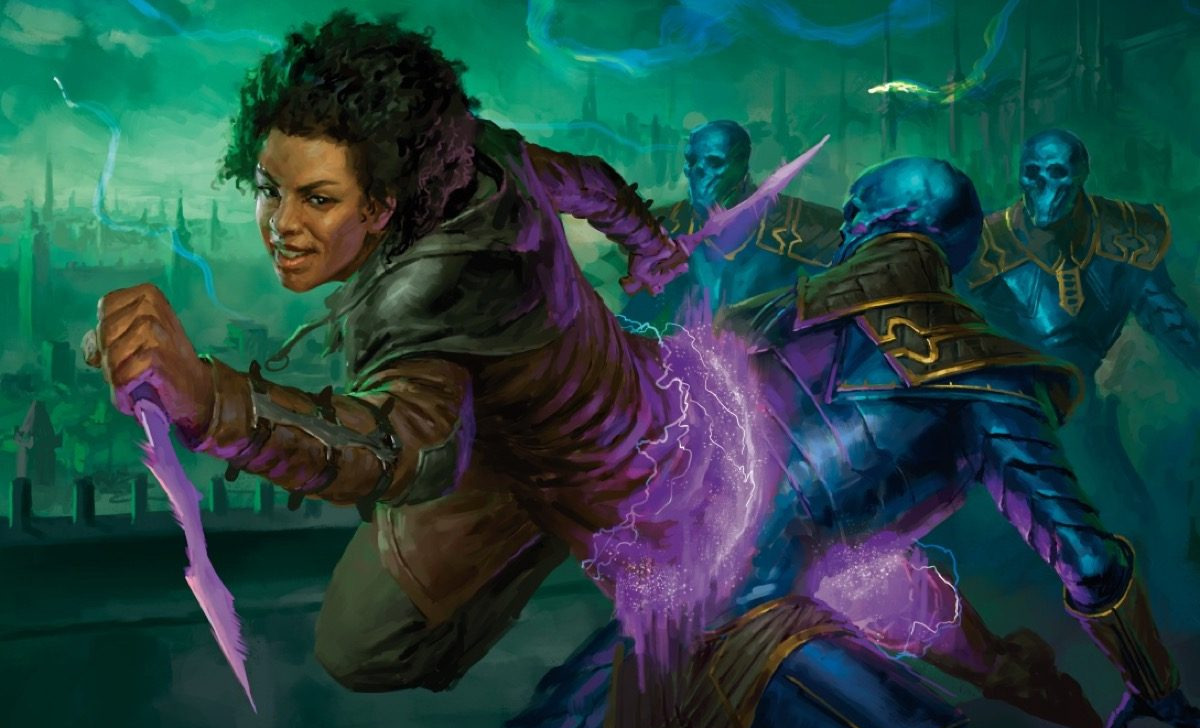 “Black Is Magic seeks to honor Blackness in its beautiful, global entirety, and to celebrate Black history and culture in both Magic: The Gathering and the real world,” wrote Adams in a Wizards of the Coast feature in which she discussed ‘Designing Black Is Magic.’

Adams continued, “But what is Black history? Is it a 28-day shout that ends in 337 days of silence? A million stories lost to time and oppression? A necessity for progress? I don’t think there’s a right answer, but I came to my own conclusion as a guiding light for this project.”

“I’d say Black history is the reflection of the lives Black people live,” she added. “An accurate, unflinching look into the darkest corners of our legacy to find the brightest examples of human excellence. To understand that the past informs our present and that to acknowledge it is to do more than survive its consequences. It is about thriving. It is the celebration of lives well-lived and a profound connection that all Black, African, and African American peoples share. Black stories are global stories.”

Adams concluded by sharing her hope “that this drop says one thing to Black and Black Magic: The Gathering communities—’My community.’ You are here, you have always been here, you always will be here, and we will fight for you to be here. In our history. In our culture. And in our games.” 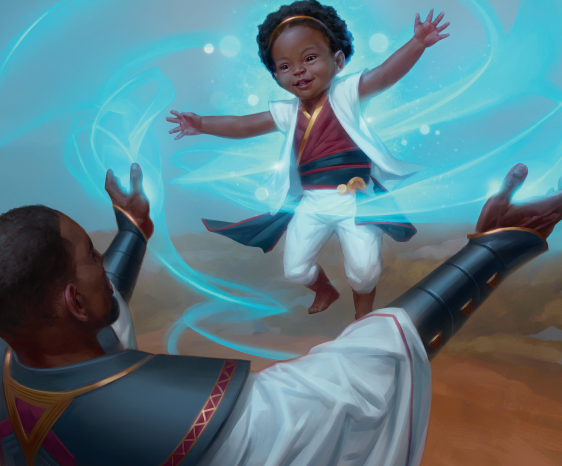 The alternate art cards featured in Black Is Magic, as well as brief excerpts from Adams’ design notes (which can be read in full here) for each respective illustration, can be seen below:

Shalai, Voice of plenty, interpreted by artist Ernada Souza “as a guardian angel who protects and shields the people.” 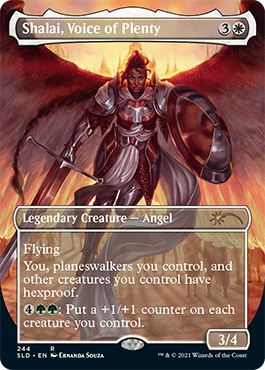 Here’s the description for the card:

“Guardian angels have taken many forms in popular media, but in my home, they have always been Black. Representation is very important to us, and my mom always went out of her way to make sure my sister and I grew up with dolls, books, and shows that reflected our colorful lives. Every year for Christmas, my dad uses his superior height to put a Black angel on the top of our tree, and my mom decorates the house with a Black nativity, a diversely populated Christmas village, and Black angel figurines.

Many of the angel figurines cover children with their wings, a visual sign of their protection. In this card, I wanted to imagine who Shalai would protect in our world, and how she’d go about it. The wings of a Serra Angel are special, so I envisioned Shalai spreading her wings wide to shield the innocent, to be like so many women of color and put her heart, soul, and body on the line for her community.” 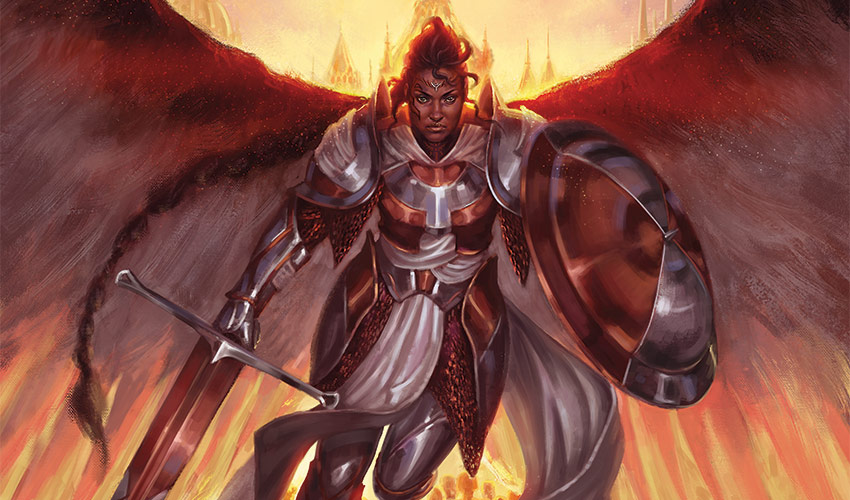 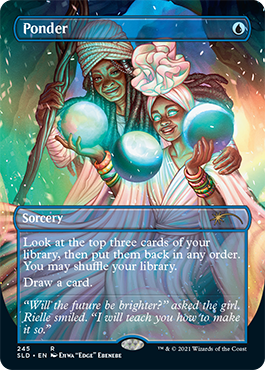 “The concept of religion for some Black American, African American, and African peoples is fraught with so many unspoken narratives. After the African Diaspora, those who were scattered from their original homelands lost their indigenous religions and connection to the spiritual practices of their ancestors. As an act of resistance to the pressure of Christianity, some indigenous peoples combined their beliefs with Christianity, creating new traditions like Santería and Vodun, which both have connections to Catholicism.

In modern times, there has been a rise in young Black Americans seeking out these lost traditions as a grounding way to heal and build community. I wanted this card to be a nod to this transition. It shows an elder, most notably our new Ikoria commander, Rielle, the Everwise, guiding a young seer. They are both in white clothing and headscarves, and there is a sense of power and excitement in the air. You can see African bangles on the young girl’s arms, and it brings me back because I grew up with bangles in my culture. Ejiwa “Edge” Ebenebe did such a beautiful and realistic portrayal of how older Black women support younger ones, and the eagerness the younger generation has for seeking a connection with what they have lost, not to mourn, but to build a better future for themselves.” 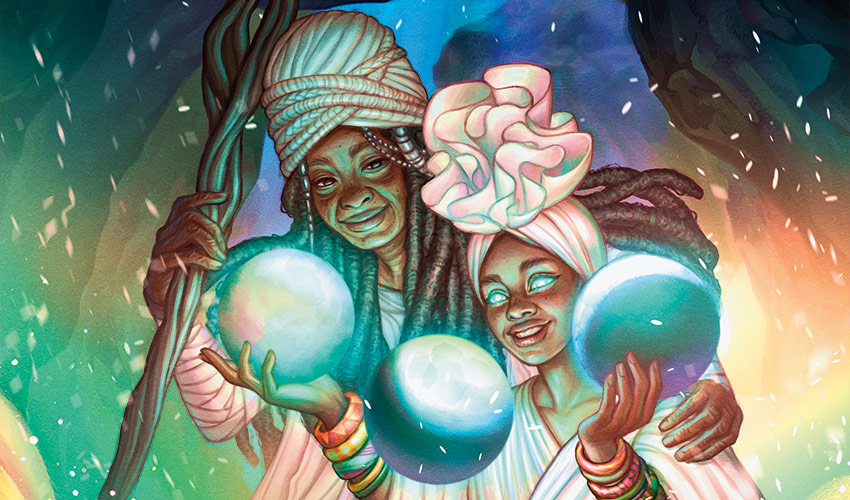 Cultivate, a card illustrated by Hillary Wilson “that acknowledges the need for the past and present to reconcile for a healthier future.”: 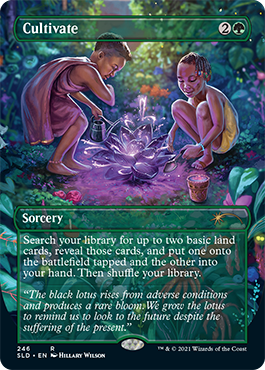 “There is an expectation that due to slavery, Black people in America don’t farm or grow things. Instead, there is a stigma in which we are the ones who deplete resources, offering nothing to the table but an open hand. The idea of the Welfare Queen, popularized during the 1976 election, cemented into American history the stereotypes that still impact our opinions on welfare today. In truth, these perceptions are easily debunked given a little time. When seeing the world without fear or prejudice, it is clear that this isn’t true. So many Black and African people have rich food cultures and traditions with ingredients that were grown within our native communities. Growing plants for food, medicine, or shelter is just a part of reality. In countries where everyone is African, there are plenty of African farmers.

There are a lot fewer Black farm owners in this country due to the systemic oppression and prejudice they face. According to the Center for American Progress, Black farmers lost 80% of their land between 1910 and 2007. Farming is very expensive, and between denying their loans, wide-spread discrimination from the USDA, and land taken through force, local corruption, and fractured land titles, it is a herculean feat for most Black farms to stay alive.

When I concepted this card, I thought about what it means to cultivate land in this narrative. My puny “struggle-bubble” balcony garden, community plots to support neighborhoods that are food deserts, and the larger narrative of farming as a whole. This card has a lot to say, and without an article, it would be impossible to say it all. In short, it is my way of affirming the validity of Black farming and highlights ways in which growing things connects future generations to their roots.” 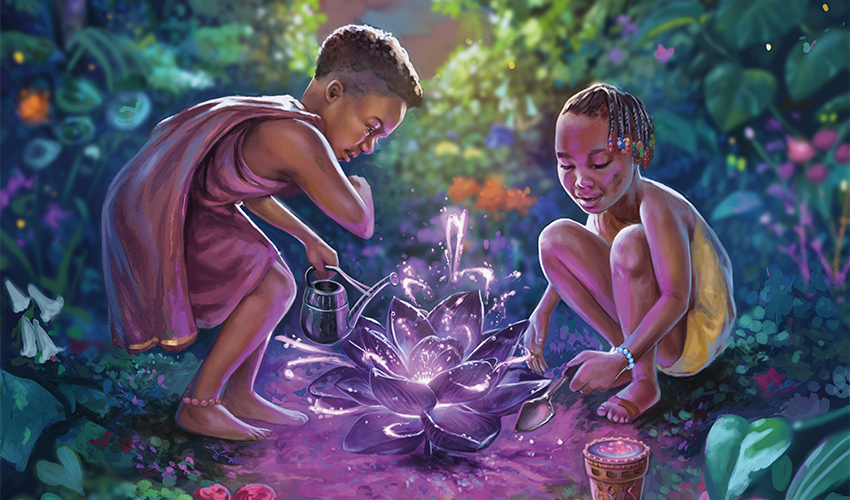 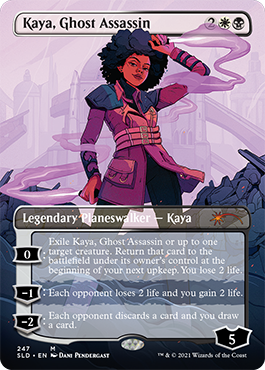 “Kaya is the reason I know Magic. A couple years back, I saw her leaning against a door with her sculpted cheekbones, and I was intrigued. I looked her up, found Magic: The Gathering, and the rest is history. She is proof that representation matters, and Dani Pendergast gave us this phenomenal version of her.

She looks powerful because she is, and her hair is of course, perfect. Kaya’s afro is one of her most iconic features and a multigenerational symbol of Black power and pride. I told Dani I wanted it to remind me of Diana Ross, the diva of divas. Here’s to the Black female trailblazers that change our lives and all the people supporting them.” 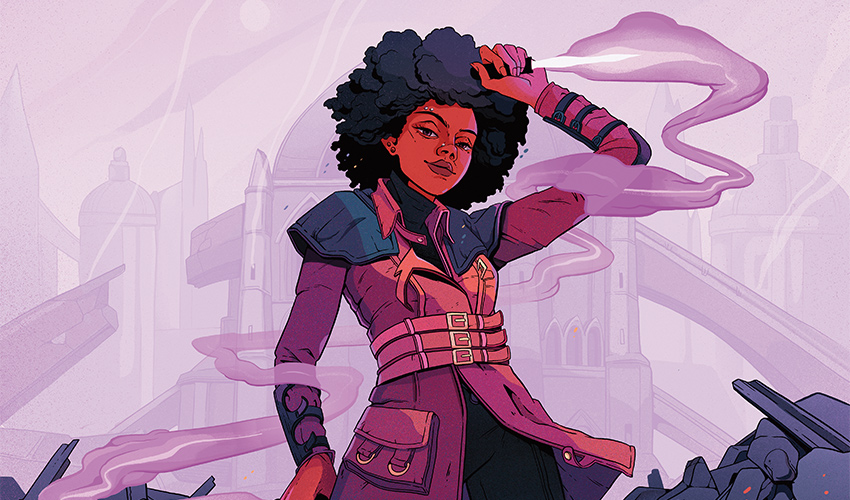 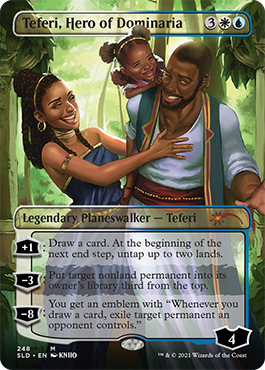 “This card is my love letter to Black fatherhood and family, and I think honoring Magic’s favorite Time Dad is the perfect way to do it. Teferi is the first Black Planeswalker in Magic’s history and has some of the most impactful cards and richest backstories in our lore. Before he was a wise authority figure, he was a student of Urza and a notorious prankster.

This card is what I imagine it would have been like during those years that Teferi healed from his trauma and learned to live again, bolstered by Niambi and Subira’s love. So much is known about the Time Mage Teferi, but the women who made him are sometimes absent. Subira made her first visual appearance in our game in Core Set 2021, and now that we know what she looks like, I wanted to complete the family. KNIIO managed to convey the love and nurturing between them in such a small space. Every time I look at it, I think of my parents, and I can see myself and my family in his family.” 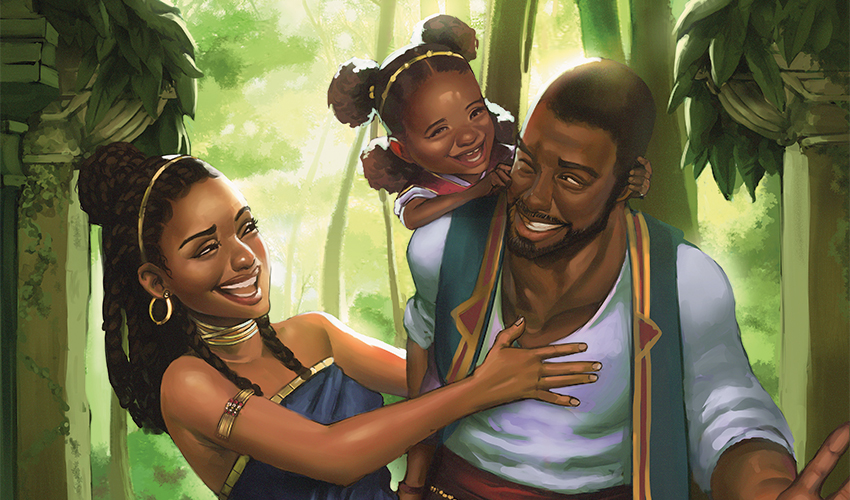 Black Is Magic will be available for preorder from February 22nd to March 31st through the official Magic: The Gathering Secret Lair online store. The set will cost $39.99 USD for the non-foil version and $49.99 USD for the foil version.

Proceeds from the sale of Black Is Magic will be donated to Black Girls CODE, an organization which “aims to increase the number of women of color in the digital space by empowering girls of color between ages seven and seventeen to become innovators in STEM fields, leaders in their communities, and builders of their own futures through exposure to computer science and technology.”

What do you make of Black Is Magic? Let us know your thoughts on social media or in the comments down below!