After asserting that internet personalities have control over their followers and should be held responsible for their actions, Anita Sarkeesian has hypocritically denied that neither she nor the audience of her website, Feminist Frequency, ever played a role in the harassment of YouTuber and popular nerd personality Liana Kerzner. 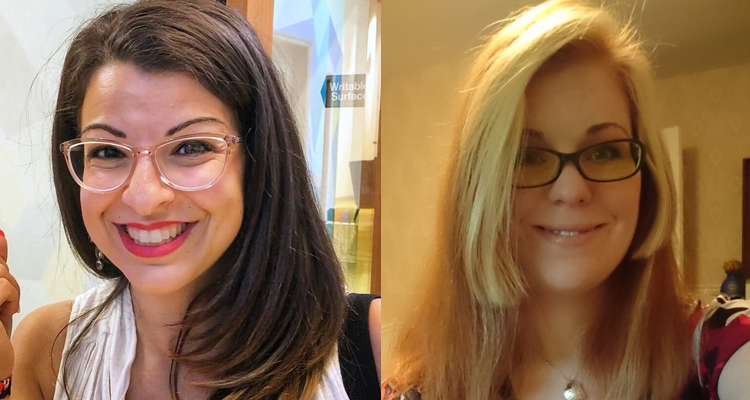 On February 13th, Sarkeesian took to her personal Twitter account to author a lengthy thread in which she sought to discuss “the relationship between fans and influencers/streamers.”

“A lot of y’all claim that an influencer has no control over their fans and cannot be held responsible for what their fans do,” wrote Sarkeesian. “This is inaccurate.”

She then noted “(Granted these are probably the same people who claim that media has no influence on us so I don’t know why I’m bothering but here goes)”, before proceeding to explain her argument.

“Influencers create the culture of a space whether that’s comment sections, social media, discord, twitch etc.,” said the feminist video game critic. “They consciously and unconsciously share their values and fans participate because of those shared values or they learn to share them.” 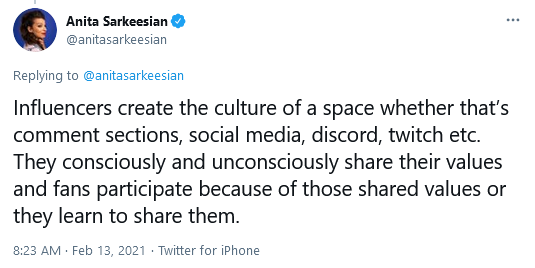 In a particularly typo-ridden attempt to demonstrate a “clearer example” of this dynamic, Sarkeesian then presented an unrelated negative ‘example’ of the phenomena based heavily in critical race theory, equating influencer culture to how a workplace filled with “all white male leadership” could foster a culture of toxicity for their “marginalized employees.” 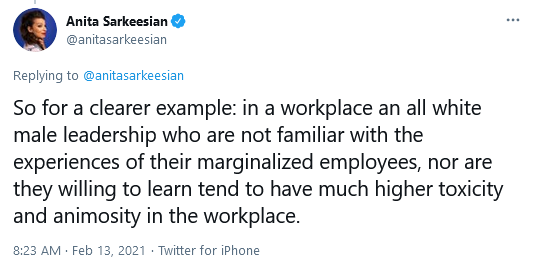 “It’s not a surprise that video game companies whose leadership holds toxic values,” she continued. “And the games themselves perpetuate those values, also seem to have the most toxic fans and community.” 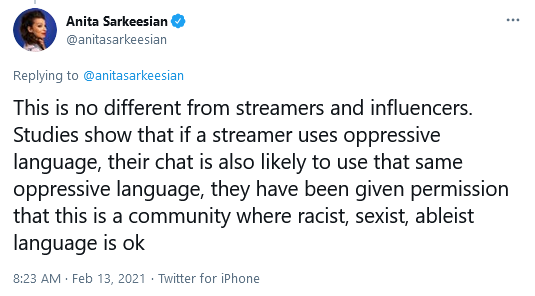 Pointing to popular streamer Tyler “Ninja” Blevins, due to his status “as one of the biggest streamers of all time,” Sarkeesian stated “His constant insistance that he will not stream with women signals his values. He can deny this all he wants but he is signaling to his audience that women are inferior, not good at games, not worthy of his platform.” 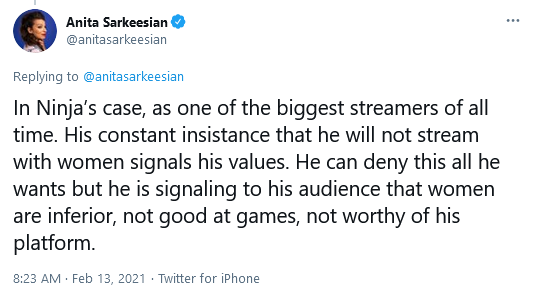 Related: Ninja Faces Wave Of Backlash For Refusing To Lecture Audience On “Racism” and “White Privilege”

Despite Sarkeesian’s sinister insinuations, Blevins has stated multiple times that he prefers to stream with female personalities in group settings, rather than one-on-one, out of respect for his marriage to wife Jessica Blevins, as he believes such interactions would do nothing but fuel harmful rumors of marital impropriety.

“His audience accepts this, and internalizes this by continuing to participate in a space that perpetuates sexist attitudes,” she then said of Blevins’ audience. “The sexism is pollution that everyone in that community is breathing in.”

“He, and anyone with a significant following do not get to simply throw their hands up and say well I didn’t directly tell them to harass anyone and therefore I am not responsible,” concluded Sarkeesian at the end of her thread. “Influencers influence! They shape the attitudes around them, for better or worse.” 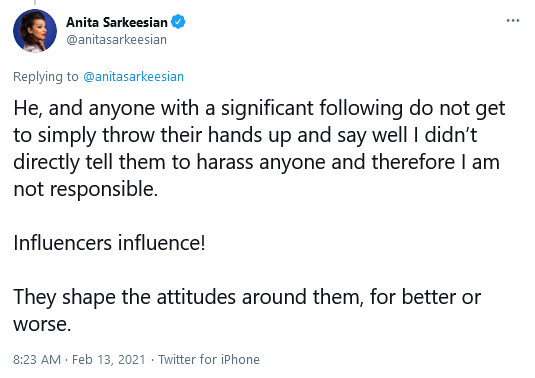 In response to Sarkeesian’s assertion that those with a “significant following” were responsible for any instances of harassment perpetrated by their followers, Kerzner wrote, “I guess this is an apology for the years of harassment I’ve received from fem freq fans? I accept! Now please get them to stop.” 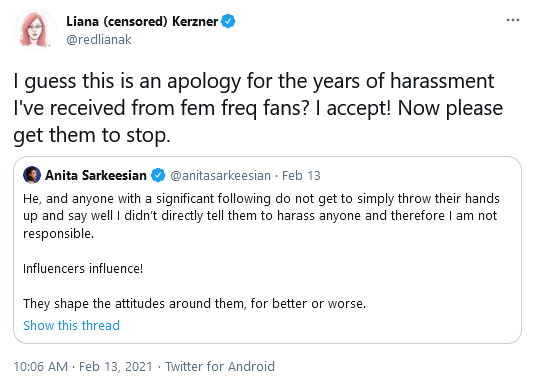 A frequent critic (no pun intended) of both Sarkeesian’s Feminist Frequency website and the activist’s general rhetoric towards the gaming community, Kerzner has been outspoken on the topic of Sarkeesian’s supporters and their harassment against her for years, with the YouTuber and Cosplayer even writing in a 2015 piece for the now-defunct pop culture news outlet metaleater that “the fact that I’ve been writing about issues related to women in games before Anita Sarkeesian even started her Kickstarter has been declared irrelevant,” as “Sarkeesian’s ‘fans’ mercilessly bully any dissenters, myself included.”

“I also discovered that definitively proving that I was harassed was nearly impossible because the confirmation bias regarding Internet harassment tends to be strong. Even if I could prove someone made inappropriate comments and whipped up others to attack me as well, the defence was that I deserved it,” Kerzner continued in her article, titled “Why Feminist Frequency almost made me quit writing about video games: Part 1.” “‘Listen and believe’ easily morphs into ‘hear and ignore’ when a group labels someone their political enemy. This phenomenon isn’t unique to gaming: it’s common in all extreme Internet discourse.” 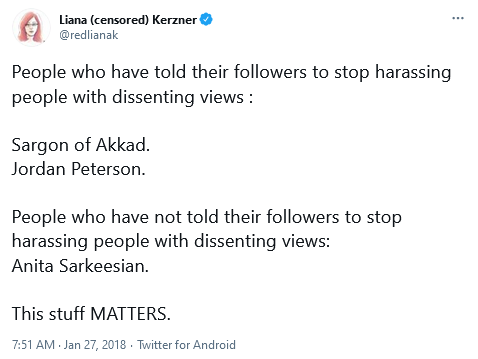 “That’s not feminism thanks,” said Kerzner at the time. That’s just bullying.”

Taking notice of Kerzner’s response to her lengthy Twitter thread about influencers, Sarkeesian reposted a screenshot of the YouTuber’s tweet, albeit with personal details blocked out, and stated that she was “absolutely floored by this tweet.”

In a baseless and misogynistic accusation, Sarkeesian wrote that Kezerner had “directly fanned the flames of GamerGate’s misogyny by playing the ‘cool chick okay with sexism’ and has profited off of positioning herself as, well basically not me, a woman in games who tells men that loving sexism is a-ok.” 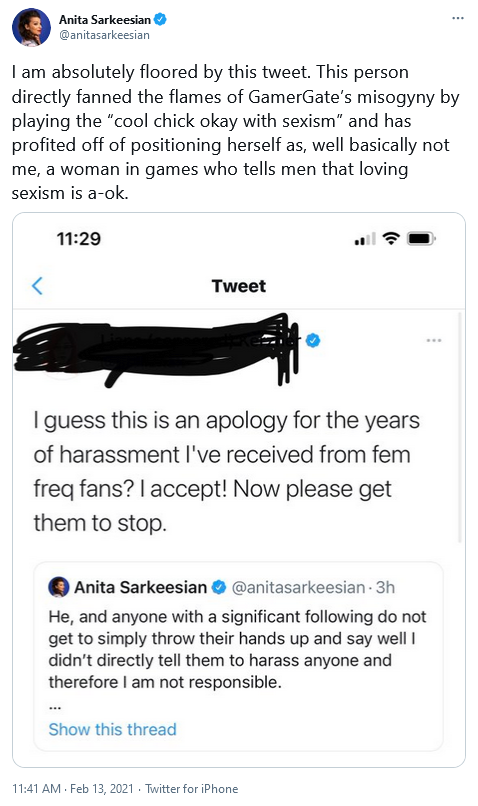 Ironically, despite her self-aggrandizing assertion that “anyone with a significant following do not get to simply throw their hands up and say well I didn’t directly tell them to harass anyone and therefore I am not responsible,” Sarkeesian proceeded to do just that, dismissing Kerzner’s claims of harassment by claiming that she did “not have any recollection of ever actually referring to her publicly or even acknowledging her existence. The deep irony and delusion of this tweet is that she did the thing she’s accusing me of.”

Unsurprisingly, Sarkeesian limited who could reply to both of these tweets to only the people she follows and those mentioned directly in the tweet (of which she is the only one).

Yet, Kerzner refused to let Sarkeesian have the last word, writing “certain members of Gamergate conspired to try to drive me to suicide, and this is what ‘gaming’s great feminist’ claimed.”

Kerzner then called for her to ”STOP this,” as “she is going to hurt someone less used to these sorts of untruths.”

“I’m sorry, isn’t referring to someone as engaging in ‘delusion’ gaslighting? And she’s claiming I didn’t tell people not to harass her?” asked Kerzner in a follow-up Tweet to her initial response. “SOMEONE back me up that I have said dozens and dozens of times that ANITA is a PERSON and doesn’t deserve that?” 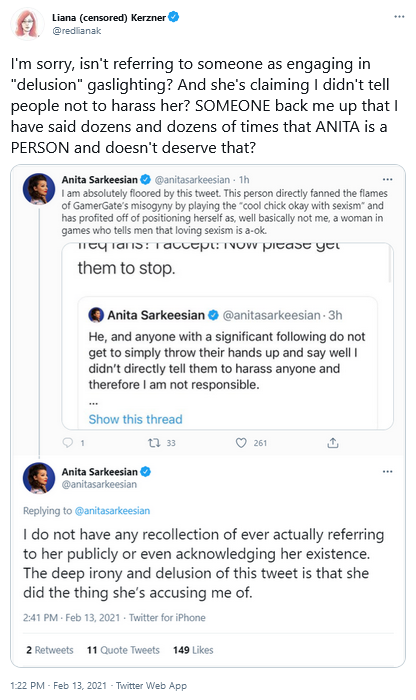 While not quite ‘dozens and dozens,’ Bounding Into Comics did find instances where Kerzner accused the “games press is very much complicit in the raging hatred directed at Anita Sarkeesian” because “they created her token damsel in distress image.”

Bounding Into Comics also found that Kerzner noted that “no one can take someone seriously when they believe there’s no room for disagreement” and thus “by attacking dissent, the press made Anita a target.”

Kerzener also took extreme issue with how “people pounded on Sarkeesian with impunity” but YouTube leapt to dramatically defend Hasan Piker after he faced backlash for his criticism of Kerzner’s disagreement with Jax’s Mortal Kombat XI ending in 2019.

Kerzner further noted in response to Sarkeesian’s denial that “she screencaps my tweet, she slanders me because I pointed out her followers harassed me.”

“The content of a person’s views does not condone harassment,” Kerzner continued. “And this is her admission that she condones the harassment by her followers.” 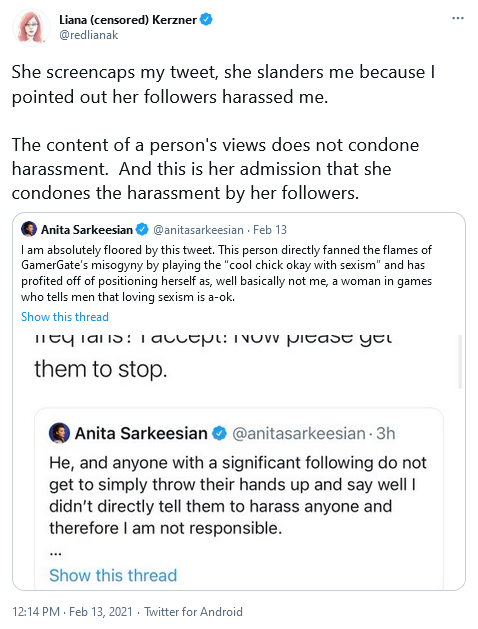 While Sarkeesian has denied any part in Kerzner’s harassment, such behavior would not be unheard of from the critic and her Feminist Frequency audience. In 2017, a tweet made from the Feminist Frequency account decrying an interview between Kotaku UK journalist Laura Kate Dale and late pro-Gamergate personality John “TotalBiscuit” Bain due to the latter’s support of the controversial movement led to Dale facing an overwhelming wave of harassment from Sarkeesian’s followers. 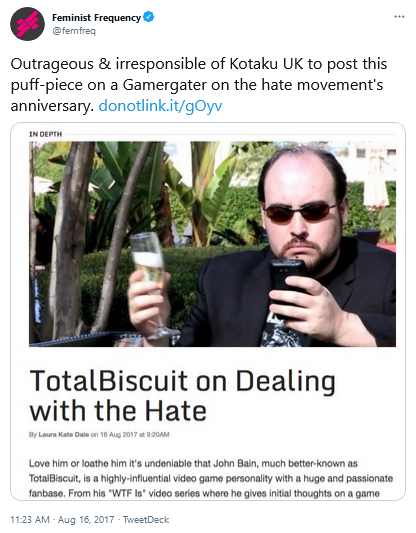 What do you make of Sarkeesian and Kerzner’s comments? Let us know your thoughts on social media or in the comments down below.