The ‘Punched a Nazi’ trait in State of Decay 2 has had its negative effects removed following a bizarre meltdown from a single fan wherein the upset player accused developer Undead Labs of supporting Nazis. 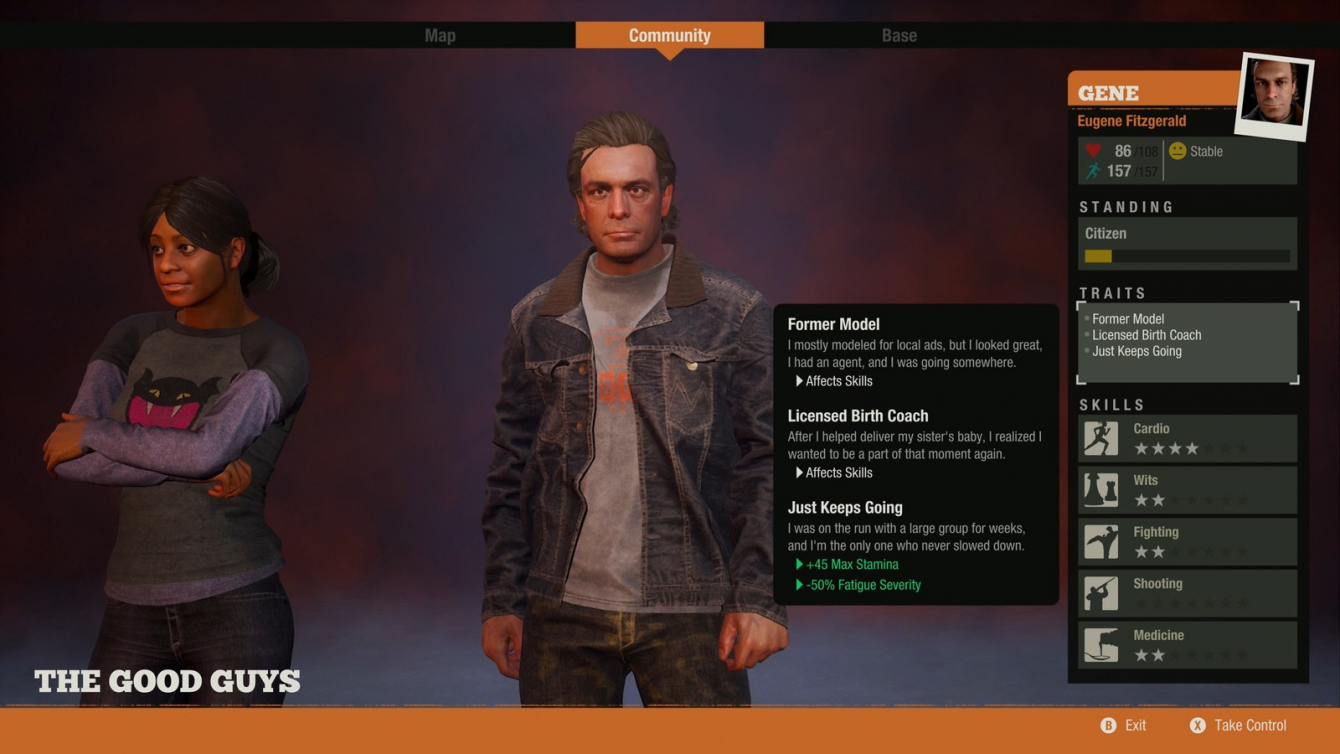 In State of Decay 2, ‘traits’ can influence which specialization options are available for that character” and add an additional level of personality to one’s character, providing the player with various skills, Hero Bonuses, and effects both positive and negative, alongside a brief description of a character’s life before the apocalypse.

One such trait featured in the open-world zombie survival game is ‘Punched Nazis’ which describes how the character had previously “ran into these guys in the underground music scene.” It adds, “There was only one way to deal with them.”

The trait imbued a given player with the negative effect of being “Irritable towards other people.”

Though the Xbox Game Studios developed title has been available on the PC and Xbox One since 2018 and the Xbox Series X/S since late 2020, the trait did not appear to cause any issue among fans until its discovery by Twitter user @Worthless_Bums on February 18th.

Coming across the trait during their playthrough of State of Decay 2, @Worthless_Bums was shocked to discover that “PUNCHED NAZIS IS A NEGATIVE TRAIT” and asked “WHAT ARE YOU DOING DEVS.” 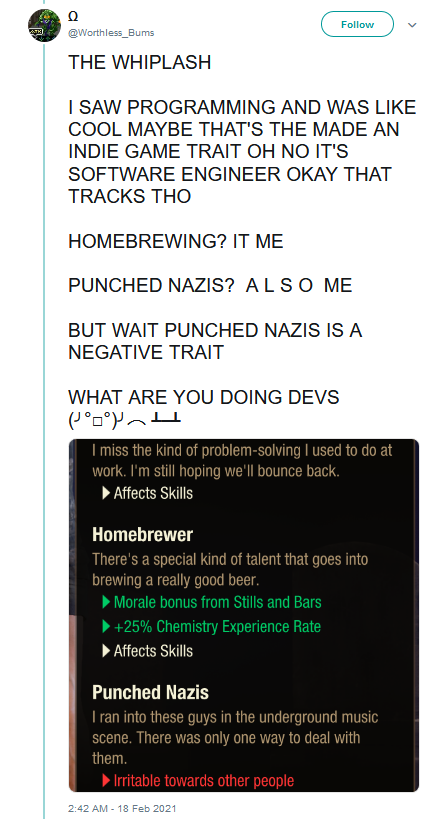 Beginning on February 18th, @Worthless_Bums would proceed to spend the next several days sending a constant storm of tweets towards various accounts related to the game, demanding that they “explain this nazi s–t in their game”. 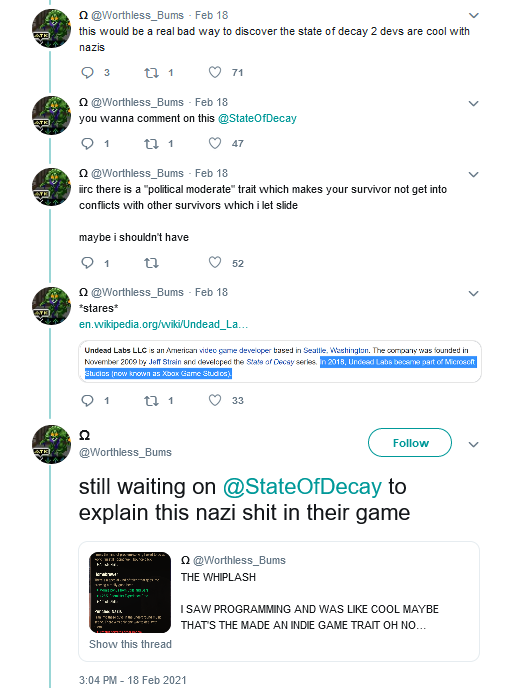 On February 20th, @Worthless_Bums would proceed to spam the State of Decay, Xbox, and Microsoft twitter accounts with a series of caps-locked tweets, again asking “WHY IS THERE  NAZI S–T IN YOUR F—ING GAME”. 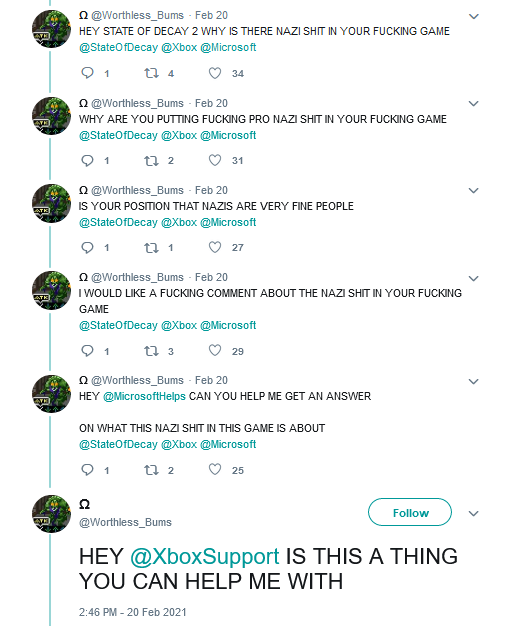 On February 22nd, he would write “You can’t be for blm and pro-nazi you pieces of s–t,”  before proceeding to ask “lol imagine if #StateOfDecay2 had a blm trait that made you irritable toward other people hmmmm yes that would be so fitting amirite.” 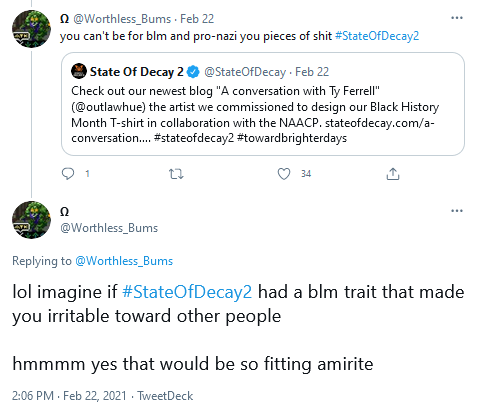 However, on February 23rd @Worthless_Bums discovered that he had been blocked by the official State of Decay 2 twitter account.

“SIX DAYS OF YELLING ABOUT THE NAZI SHIT IN STATE OF DECAY 2. RADIO SILENCE. THEN BLOCKED,” he exclaimed. “GONNA MAKE SOME ASSUMPTIONS ABOUT YOU NAZI F—S.”

Eventually, on February 25th, the official State of Decay 2 Twitter apologized to @Worthless_Bums, explaining that the “block wasn’t intentional,” but rather an unfortunate side-effect of how their “social listening software auto-filtered a barrage of offensive terms & inflammatory language directed at our channels this month, in relation to Black History Month.” 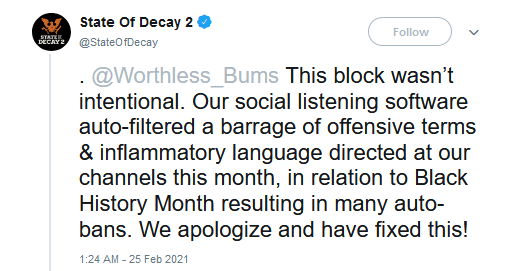 The account would then go on to clarify that “the ‘Punched Nazis’ trait was never intended to appear negative, [but] has always been an overall positive trait.”

They recalled that “We created the rare “Punched Nazis” trait long before SoD2’s release.”

“One designer actually told us firsthand stories about punching Nazis in the underground music scene,” the account wrote. “We loved it and boom, the trait was born.” 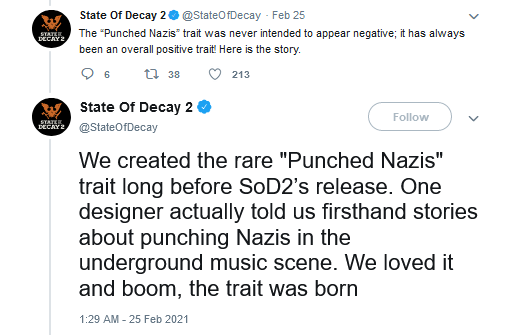 They continued, noting how “it was designed as an overall positive trait with a skill bonus — it grants four stars of Fighting experience, and also made the character more likely to argue passionately for their beliefs (we figured someone punching Nazis in a mosh pit is going to have some strong feelings)”. 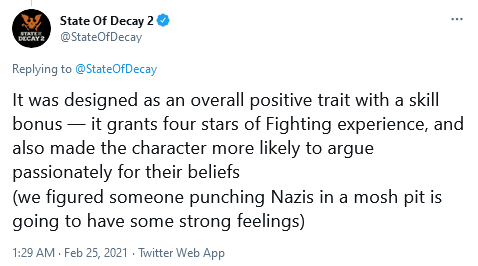 Getting into the weeds of the game’s mechanics, State of Decay 2 further elaborated that the trait “was designed to grant a skill bonus and make your survivor more likely to argue, as a net positive trait,” adding that “then we wrote a thousand more […] before we had a full-fledged Traits UI or a Morale system, which were developed later.” 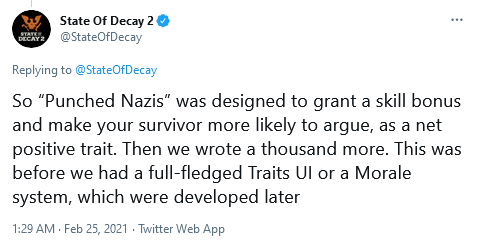 “When we implemented the Traits UI, we realized that skill bonuses stop mattering as soon as you’ve leveled your character beyond them, so we hid them behind a neutral “Affects Skills” message,” they continued. “Then when the Morale system arrived, it simplified our original nuanced concept of ‘characters arguing for their beliefs’ into a basic negative Morale effect, representing discord in the community (arguing in general).” 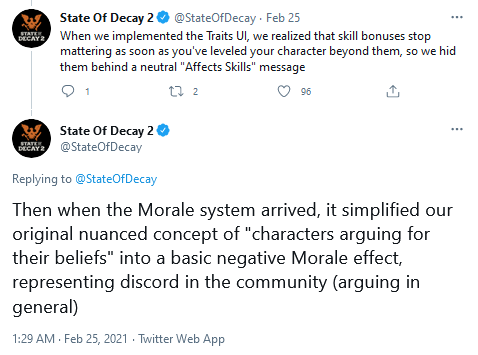 State of Decay 2 then summarized their reasoning, writing, “So today, this trait has a positive skill bonus (white text) and red text in the UI due to the likelihood of arguing. It’s been that way for years and we never realized how confusing that looks until tonight (it’s not common, we have over 1300 traits).” 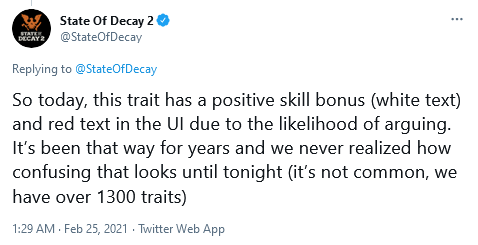 However, despite their rational explanation for the trait’s negative side effect, State of Decay ultimately concluded their thread by announcing that they would be “removing the negative Morale effect from the trait.”

“It will only have its positive effect on Fighting experience going forward (that has never changed),” the account stated. “This change will be in an upcoming hotfix.” 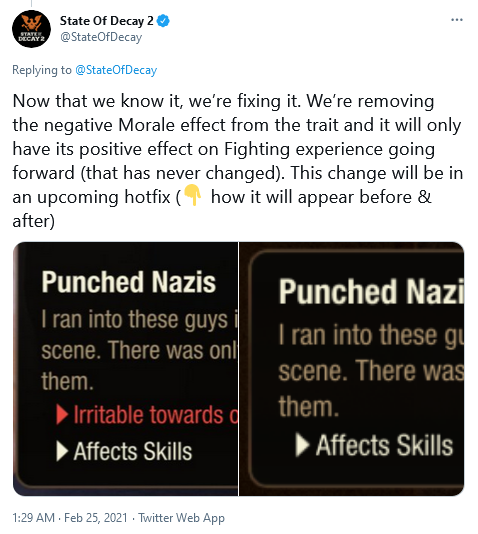 What do you make of State of Decay 2’s decision? Let us know your thoughts on social media or in the comments down below!