Arquette promoted the boycott following the Hyatt Regency Orlando hosting the Conservative Political Action Conference in Orlando, Florida at the end of February. 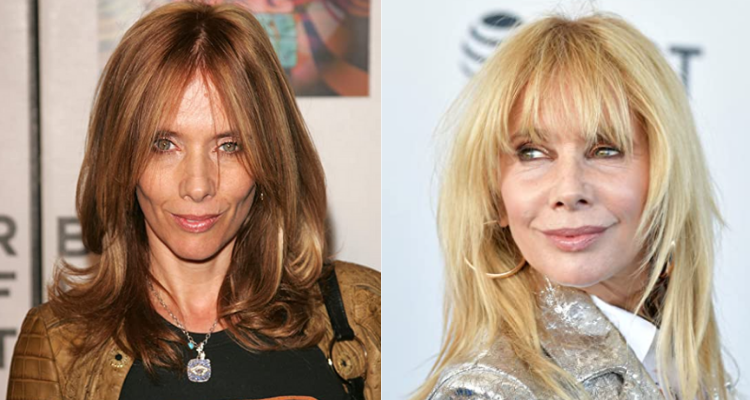 The actress, who has previously claimed she’s disgusted to be white posted to Twitter, “Hey Hyatt hotels. Highly inclusive ,does not mean hosting people who are NOT  highly inclusive ,hosting a fascist Nazi convention is the antithesis of inclusiveness.

She added, “you have made a grave error in judgement .the imminent Boycotts you are going  to feel for years to come.” 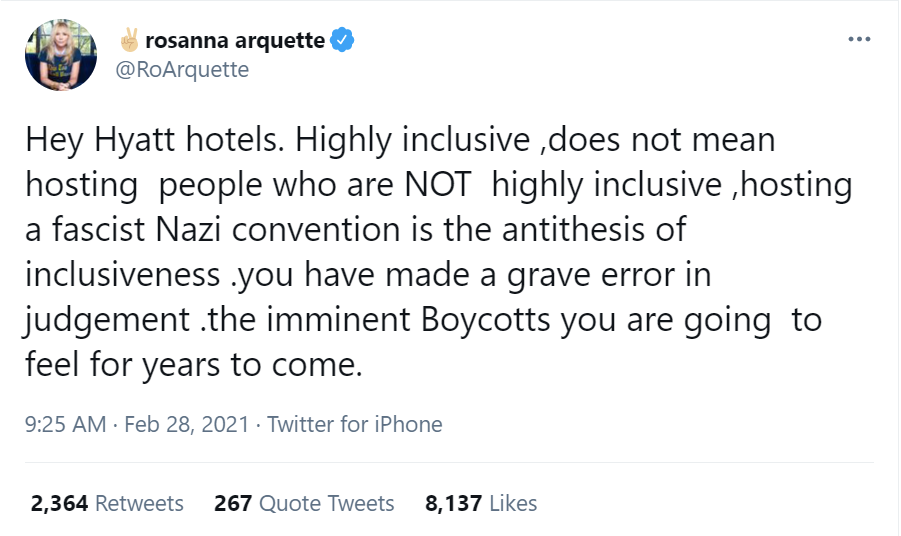 Arquette’s comments came after former Charmed actress Alyssa Milano pushed a conspiracy theory that the CPAC stage was set up to look like a Nazi symbol.

Milano posted to Instagram, “This is the stage at CPAC. THEY’RE NOT EVEN TRYING TO HIDE IT ANYMORE.”

She added, “Hyatt, this is what’s happening in your building. Ted Cruz, you stood on this stage.”

Hyatt would eventually issue a lengthy statement attacking their own customers and CPAC attendees.

Their press statement would read in part, “Further, we were extremely disappointed by the disrespect many individuals involved in the event showed to our colleagues, as it is reflective neither of our own commitment to care for members of the Hyatt family nor of how we wish to conduct business.”

The statement would also specifically address the stage design, “When we learned that CPAC 2021 stage design had been compared to a symbol of hate, we promptly raised this concern with meeting organizers who strongly denied any connection to such symbols.”

“Had we initially recognized the potential connections to hate symbolism, we would have proactively addressed it prior to commencement of the event. Unfortunately, this became clear to us only after the event kicked off,” it continued.

They concluded the matter of the stage design stating, “With CPAC’s denial of any intentional connection to hate symbols and our concerns over the safety of guests and colleagues in what could have been a disruptive situation, we allowed the event to continue. We understand and respect the opinions of those who might disagree with that decision.”

The American Conservative Union, the organization that runs CPAC, would issue their own statement from General Counsel David H. Safavian.

Safavian stated, “Contrary to Hyatt’s own mission statement of inclusivity, your company just attacked its own customer by caving into the pressures of the politically motivated social media agitators who seek to destroy CPAC, our attendees and speakers from across the country, and the millions of Americans who support our work.”

“Hyatt made a decision to issue additional statements late last night after the conference ended that disparaged and defamed us. These statements appear to validate demonstrably false and malicious claims,” Safavian added.

He would later add, “we were shocked that the Hyatt waited until after the conference concluded to issue additional statements–ones that are irresponsible, untrue, and contribute to a climate of division and hatred.”

Safavian would go on to claim that Hyatt and their team were heavily involved in the stage design, “For months we have collaborated with your team on logistics, including sharing, reviewing, and approving the stage design that was created by one of our subcontractors. The fact that no one on the Hyatt staff ever raised concerns during the process shows the ridiculous nature of your statements.”

“Moreover, your statements falsely conceal your oversight role. In fact, the Hyatt Hotel, with our organization and subcontractors, approved and worked collaboratively to build this stage. Only after a coordinated far-left assault to destroy our conference arose did you succumb to lies and compound them with your own,” he added.

Safavian would continue to rebuff the conspiracy theory saying, “We would have hoped that our 10th annual Shabbat Dinner, daily Jewish prayer services, and speeches on the main stage from Jewish leaders, such as Ambassador David Friedman, Former Ohio Treasurer Josh Mandel, and Rabbi Yitz Tendler would be enough to put an end to these outrageous falsehoods.”

Finally, he concluded, “The theme of CPAC 2021 was “America UnCanceled.” It is tragic and reckless that Hyatt would choose to abandon its own mission statement of inclusivity and play into the hands of those who are attempting to silence legitimate political views.”

What do you make of Arquette promoting a boycott of Hyatt? Do you think it will stick? Do you think Hyatt will cave to celebrity political activists and their conspiracy theories?