The CW, which is part owned by ViacomCBS and AT&T, hired anti-white racist Yana Perrault for their upcoming live action Powerpuff Girls series.

Perrault is slated to play Buttercup Utonium alongside Chloe Bennet and Dove Cameron. Deadline explains, “She was the rebellious badass of the Powerpuff Girls in its heyday. More sensitive than her tough exterior suggests, Buttercup has spent her adulthood trying to shed her Powerpuff Girl identity and live an anonymous life.” 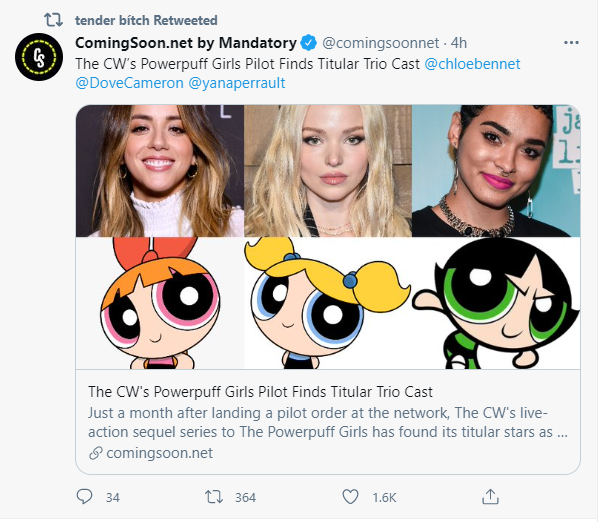 And it’s on her personal Twitter account where she’s expressed clear anti-white racist views, contempt for America, and hatred for supporters of Donald Trump.

Just this month she tweeted, “I can’t stand most white men HOWEVER the way I would marry the s*** out of Seth Rogen and love him til my dying day.”

In a follow-up she wrote, “and don’t get me wrong, some of my fave astrology girls are white and i follow em bc they do a good job! I guess when it tiptoes more into the healing & spirituality side of things, I just need more black girls to follow. and that is a real need. send your faves my way! pls&thx.” 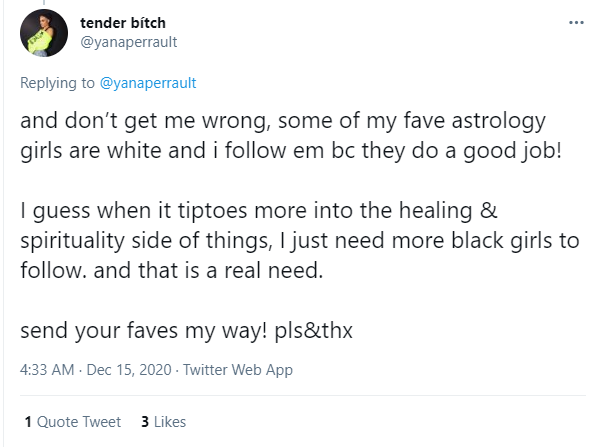 In November 2020, she wrote, “white chocolate tastes like gentrification.”

In September 2020 she went after white people in general writing, “I love how it took RBG dying for all the white people in my life to suddenly panic & feel hopeless/like our world is actually f***ed… like welcome to 2020, WONDERED when u would arrive… yall funny.” 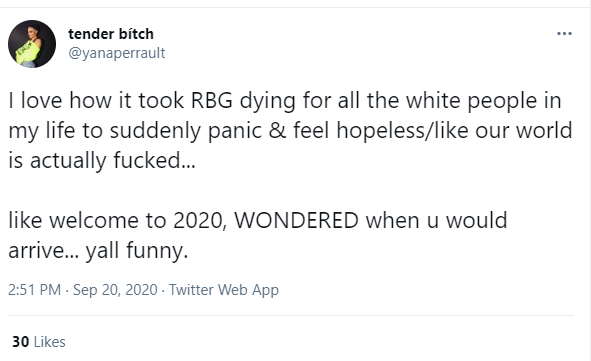 Earlier in the month of September, she wrote, “nothing I hate more than a loud white man.”

At the end of August 2020, she stated, “minding my own f***ing business i was harassed once again for this chest i don’t even want. there is no word for this level of rage and disgust. I F***ING HATE OLD WHITE MEN.” 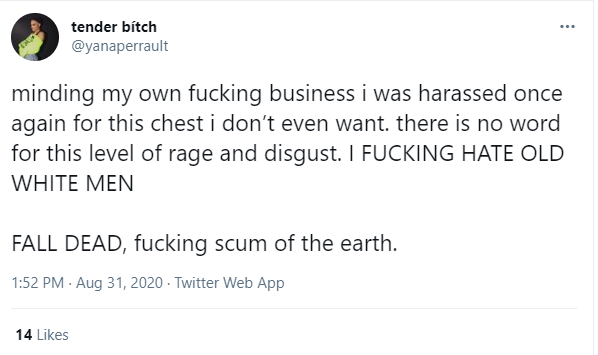 In another tweet she wrote, “i f***ing hate old white men.”

Earlier in August 2020, she wrote, “why do white men always insist on having the last word… i’m so tired. wash your legs and leave me alone.”

In July she tweeted, “white folk, I have an easy project for you today: 1. google ‘what is aave’ 2. stop using it.” 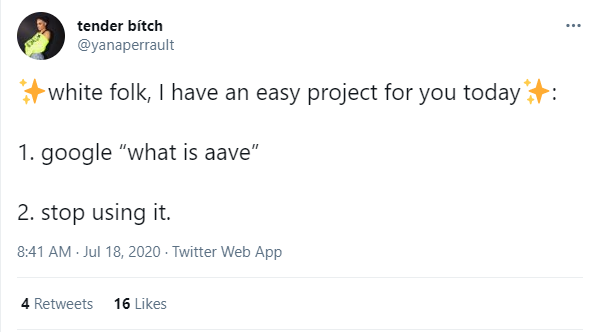 AAVE is an acronym for African-American Vernacular English also known as Ebonics.

Just minutes before that tweet, she wrote, “white girls please pls PLEASE stop saying ‘period’ yall put it on everything and it *never* hits.”

In June she said, “Vogue is historically white so f*** that shit. #VogueChallenge.” 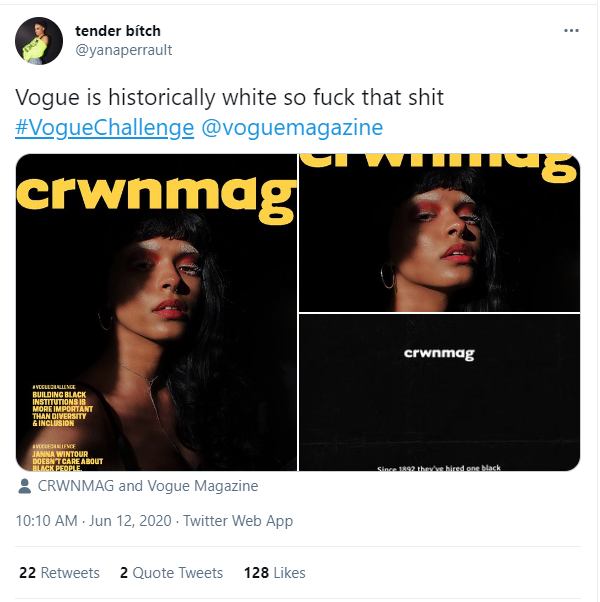 In November 2016, she wrote, “I was in the dairy aisle looking for cheese and saw ‘White American’ .. I felt too many things.”

On the same day she wrote, “Gotta love when ppl feel the need to say ‘k but not ALL white people’ ‘Not EVERYBODY’ ‘Not ALL hope is lost’ HOW STUPID DO YOU THINK I AM??”

In July 2016, she tweeted, “This nation built on slavery and slaughter, and we fail to change anything because THAT’S JUST THE WAY IT IS??!? AMERICA. WAS NEVER. GREAT.”

On the same day she wrote, “it’s flaw in all of us, to be blinded by the ‘good/fun times’ of each era, hence the movement: #StayWoke.”

In May 2016, she went after supporters of Donald Trump, “Tried to go to bed early & had a nightmare that I was carjacked by racist hillbillies.. Insomnia it is! (probs trump supporters) #terrifying”

On Independence Day in 2011, she wrote, “Hats off to the land of ‘freedom’, racism, and rednecks…smh.”

In 2015, she tweeted, “Ohio is so white. Oh my god. Just WHITE PEOPLE. EVERYWHERE. Lack of diversity (anywhere) is wack as hell.”

One has to wonder what she thinks of Marvel Studios’ Black Panther film and Wakanda.

Interestingly enough she praised a couple of white ladies who she agreed with her back in December 2016.

She wrote, “Eavesdropping on the convo of two little old white ladies a couple tables over and they are SO WOKE. Ahh, New York. I LOVE this city!!!”

She wrote, “My heart still skips a beat when I see interracial couples like my parents (white guy, black woman) holding hands down the street.”

And more recently in July 2020, she tweeted, “channeling samantha from sex & the city today so I can have the audacity of a white lady and stop feeling like shit.” 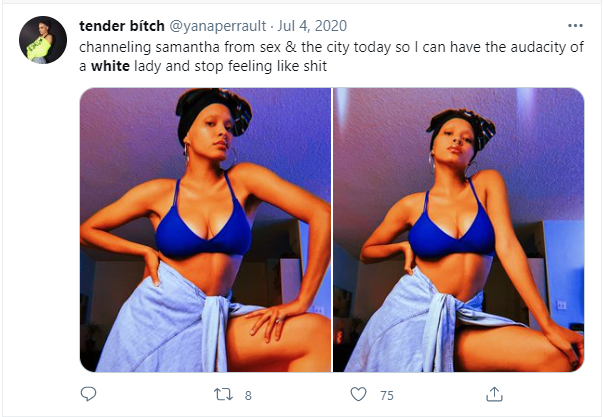 This is the state of Hollywood now. They are hiring open racists and flaunting it. We are seeing this at Disney and Lucasfilm most prominently with their hiring of Krystina Arielle and subsequent defense of her racist comments.

But AT&T, who is part owner of The CW is no stranger either. They hired an open Marxist in Black Lives Matter co-founder Patrisse Cullors.

Not only that, but AT&T also owns Cartoon Network who put out a PSA telling people to see color in order to be anti-racist.

Hollywood is doubling and tripling down on this agenda and they aren’t stopping anytime soon.