Ever since former MMA fighter Gina Carano was fired from Disney and Lucasfilm for sharing an Instagram post that didn’t bode well with Disney higher-ups, a great majority of Star Wars fans have been pouring out to show their support for the now former-The Mandalorian actress. 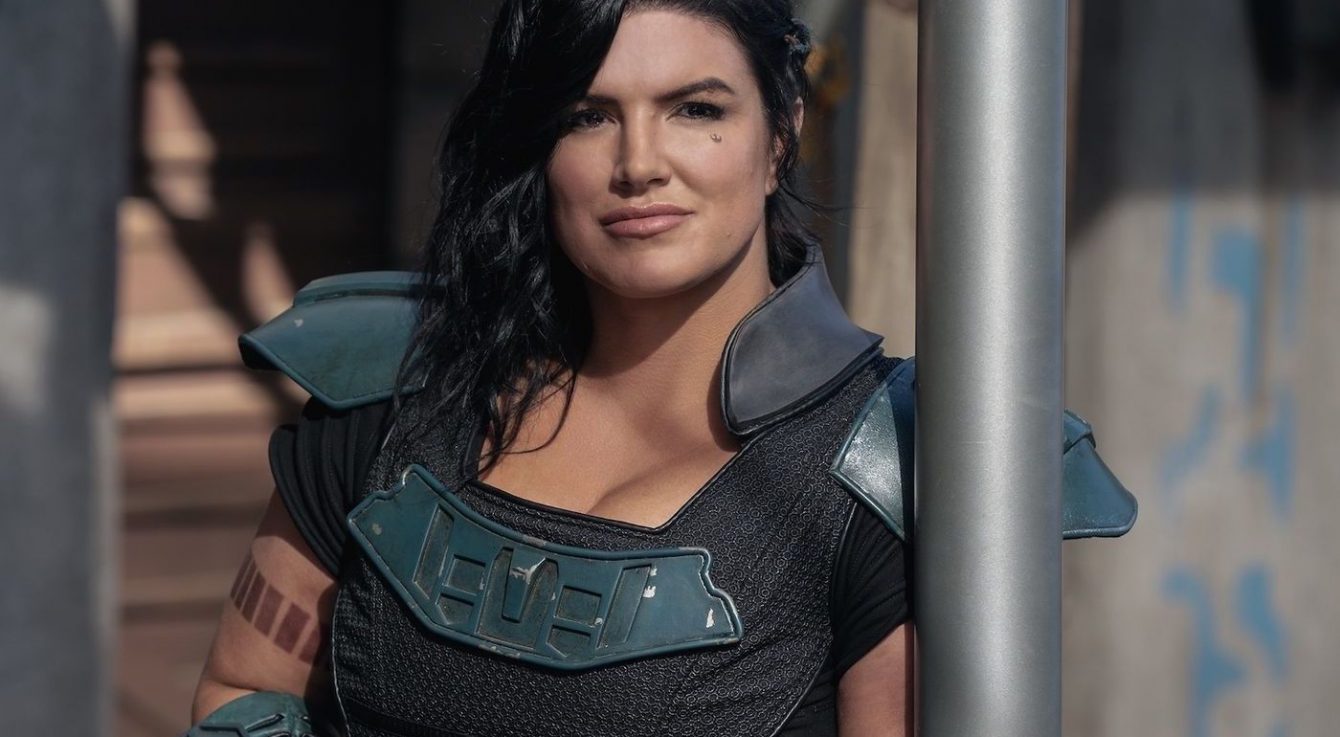 But since then, Star Wars fans have continued to call out the hypocrisy of Disney and Lucasfilm’s decision.

Fans have also pointed to the continued employment of The Mandalorian star Pedro Pascal as the preeminent example of both studios’ hypocrisy, as despite directly comparing all Republicans to Nazis in an Instagram post of his own, he hasn’t been fired nor has he appeared to face any sort of backlash for said comparison. 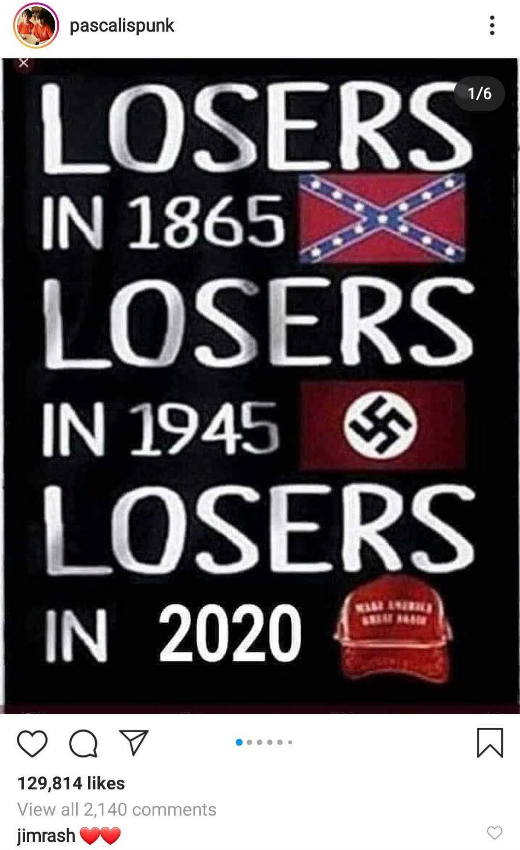 While Carano has had the support of Star Wars fans, mainstream media outlets and social media platforms have been — rather unsuccessfully, I might add — trying to push a very different narrative.

In an illustration of this narrative battle, a poll of 1,098 American adults conducted by Survey Monkey and commissioned by The Daily Wire between February the 26th and March the 3rd has revealed that a grand total of 73% of American respondents stand behind Gina Carano.

For a better idea of the ramifications of this particular poll, I encourage you to check out our previous coverage of its findings, published originally just after its results were made public.

Here’s where things get even more interesting, as after a post by the National Review Institute’s @GiancarloSopo linking to an analysis of the poll was retweeted by Carano, the actress discovered that Twitter had seemingly been tampering with the numbers of likes on the original tweet. 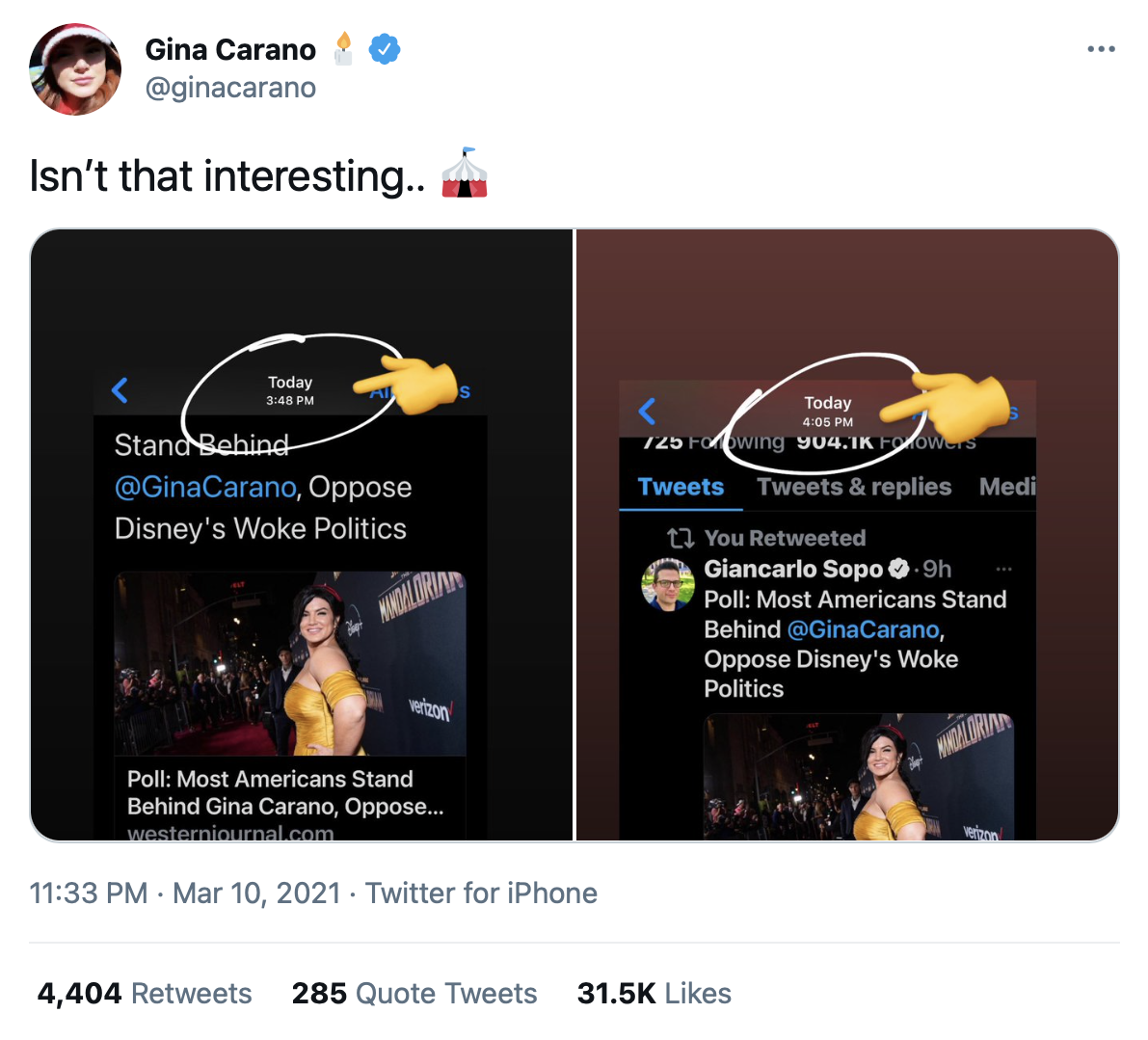 Courtesy of some handy screenshots captured by Carano, we can clearly see that Sopo’s post had been liked a total of 2,738 times as of 3:48PM. Not even twenty minutes later, at 4:05PM to be more precise, the number of likes had significantly decreased to 467.

Could it be that 2,271 users on Twitter (yes, I did the maths) decided to “unlike” the post? It shouldn’t make any sense, right? 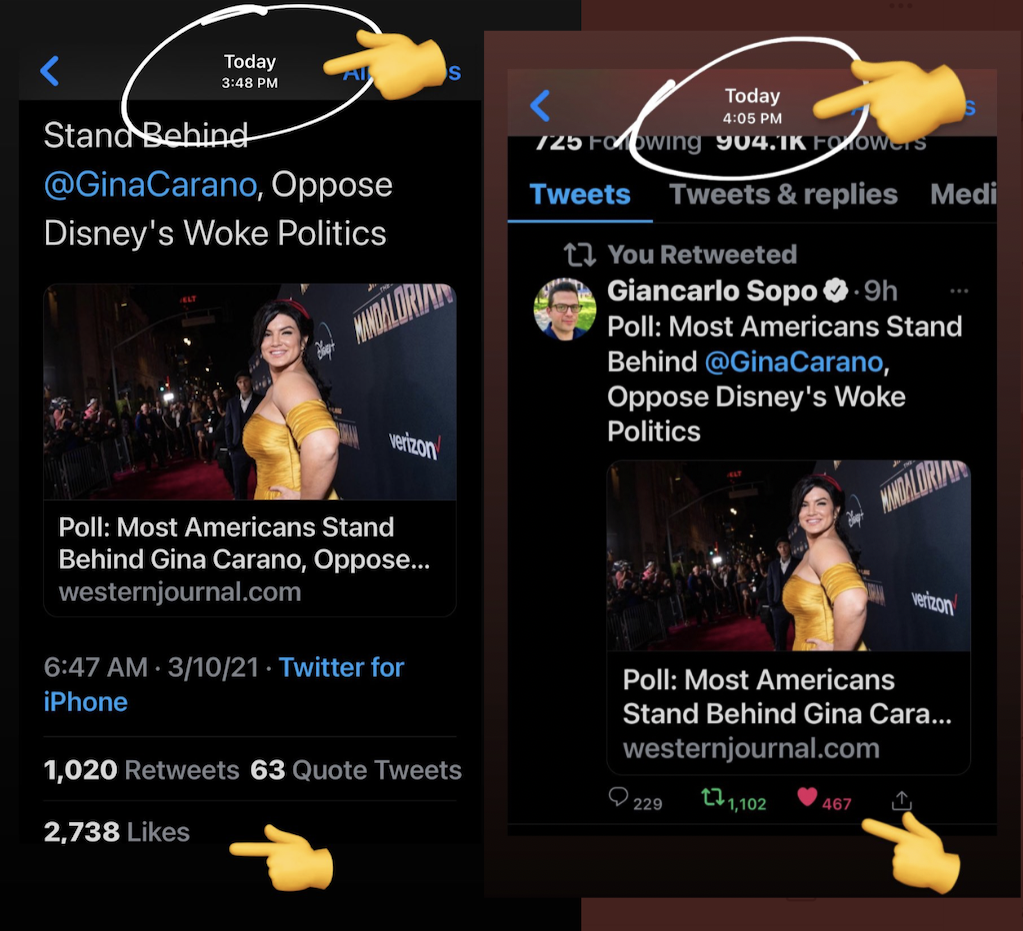 It gets even better. When Carano took yet another screenshot at 6:40PM, d the number of likes had already gone all the way up to 2,151. A short 9 minutes later, that number had dropped to a mere 527 likes.

As a betting man myself, it seems to me that Twitter doesn’t want to see this particular poll trending, because it doesn’t do their woke narrative any favours. They can’t have that – imagine allowing people to exercise their right to express opinions on social media? Unheard of. 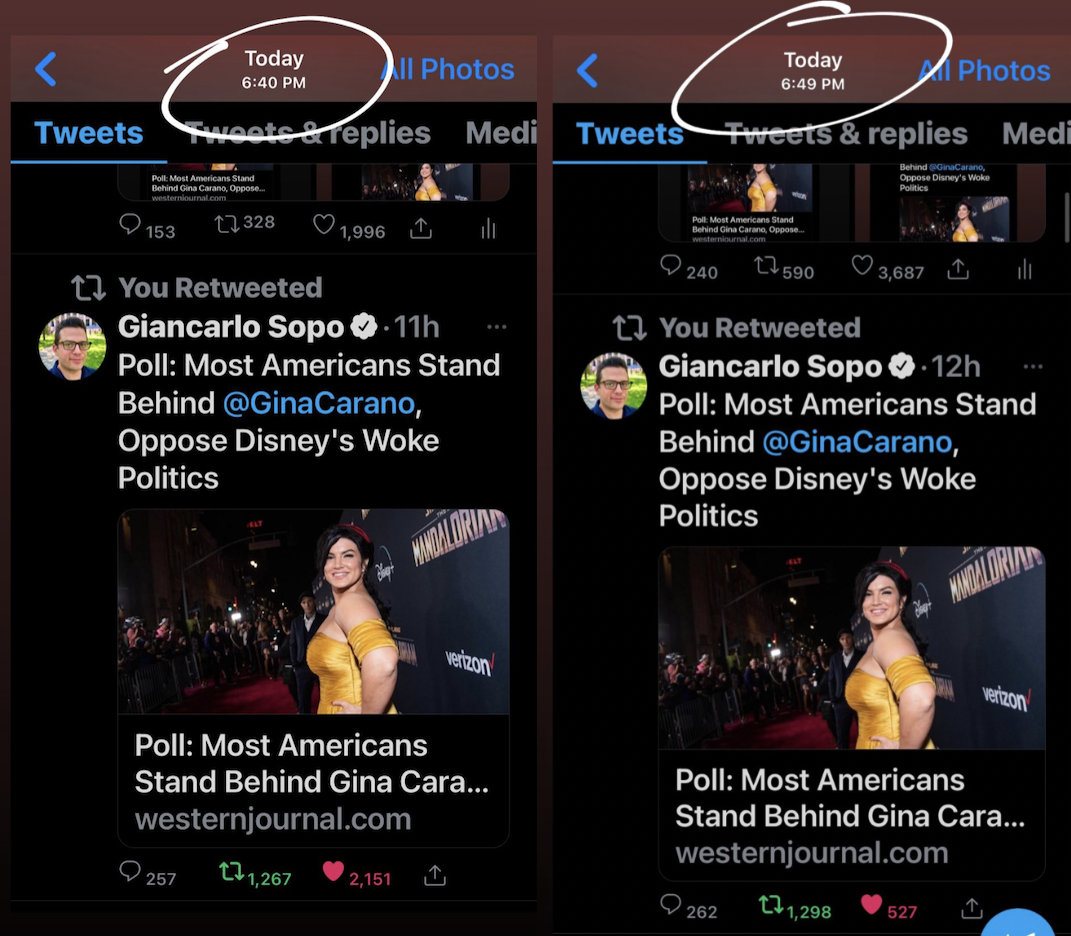 Again, this shouldn’t be too surprising, since social media platforms like Twitter and Facebook constantly censor anyone who doesn’t necessarily agree with their woke politics, as well as those who flat out oppose them.

Earlier this month, Twitter was caught allegedly disabling likes on a tweet made by Harry Potter Creator J.K. Rowling in which she showed her support for Maya Forstater, a tax expert who was fired from her job for her views on transgender issues.

If social media platforms are so apparently willing to disable likes on posts that hurt their feelings, it would stand to reason that they would outright remove likes from posts that utterly destroy their woke narrative. 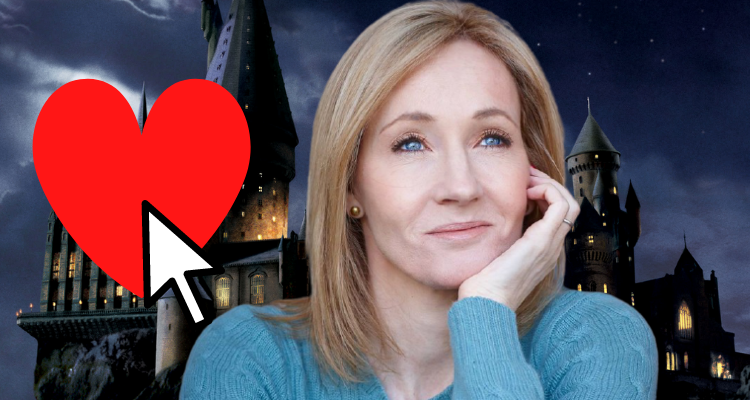 As of this writing, Sopo’s post about the Carano-centric poll has over 16K likes on Twitter This reaction should be considered an L for Twitter, Disney, Lucasfilm, and SJW snowflakes, whose actions have destroyed fan confidence in their offerings and done little to promote the idea that they support strong and independent women.

Do you think Twitter has gone too far trying to push their woke politics down everybody’s throats? Is the censoring even justified in the slightest? Leave us a comment down below, and let us know what you think.