Audience scores have been revealed on multiple review aggregate sites for Disney’s newly released The Falcon and The Winter Soldier show.

On Rotten Tomatoes the show has a 79% Average Audience Score.

Here’s what some users are saying:

Tengku N gives the show five stars. He writes, “Brilliant action & well-developed drama. For once in the MCU, the centerpiece touches on the grounded lives these heroes live. Watching this post-Endgame era allows us to delve deeper into the reality of the Avengers’ “heroic” decision, and its a really dark aftermath.”

Dany A gives the show one and half stars. He writes, “The same repetitive and exhausting Disney formula. It is not known if it is Marvel, Star Wars or the family dramas. Entertaining but empty. Nothing justifies its existence.”

Justin K gives the show two stars. He writes, “Was hoping they could do something interesting with thwart characters besides making them seem like Steve’s long-lost lovers. I was wrong. Not everyone needs their own show or movie.”

Jack B gives the show two and a half stars. He writes, “It could get better, but the first episode was very boring.” 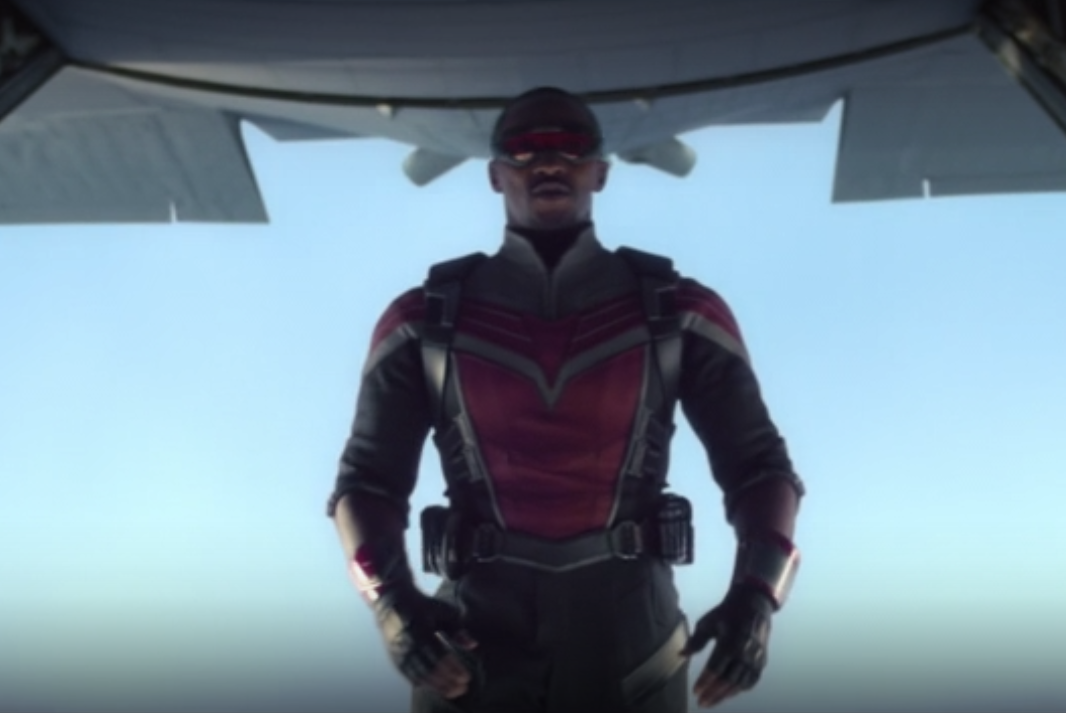 Nick M gives the show four stars. He writes, “RATING: B+ Director: Kari Skogland ( after one episode ) The Falcon and The Winter Soldier presents some really interesting ideas and approaches in its first episode that could end up in a really good show. Because Anthony Mackie and Sebastian Stan hadn’t any Scenes together so far I obviously can’t write about their chemistry but both are really good individually. The Action Scenes look really amazing but they could be better. As could the show but I’m really interested in what this might bring.”

Josh D gives the show three stars. He writes, “A return to the status quo of superhero films is somewhat a disappointment for Marvel after the mind-bending adventure of Marvel’s first Disney+ exclusive Wandavision. While likely to be enjoyable for the action, this show lacks a hook that leaves me yearning for more.”

Brody L gives the show one and half stars. He writes, “Before I say what my issues were with the first episode, I’d like to share my expectations and hopes for the show: 1. I love Marvel comedy. This should peak a point where to show is almost a comedy. Sam and Bucky have great charisma so it should be fun. 2. I’m really hoping that they make Bucky gritty and OP again. He was such a badass in TWS and CW. They kinda nerfed him for IW and Endgame. 3. Great action sequences. Now onto what I didn’t like. 1. The first episode wasn’t very funny. I felt like I was watching a drama. Even without Bucky, Sam’s always been a really funny dude and I never heard any jokes or witty remarks. I’m dissapointed on that. 2. Bucky’s storyline is great, but they’ve made him too soft. The scene where he goes to arrest the senator should’ve been awesome, but it was boring. 3. The show so far had me bored and underwhelmed. I have hope for the next few episodes. It seemed like this was meant to be exposition. I’m really hype for John Walker as US Agent.”

Nicholas J gives the show five stars. He writes, “I am positively speechless. These two characters are probably one of the best in the MCU. The people who are calling them side kicks and leaving one star reviews obviously have not watched the last 23 movies nor saw this episode, because if you did, you would be just as speechless and amazed as I am right now. This is so well written, and my god someone give Sebastian Stan an academy aware already. Kudos to Sebastian and Anthony, Bucky and Sam. You guys made it. Let’s bring on Black Cap. Steve Rogers is dead, let’s move on. He would’ve wanted that.” 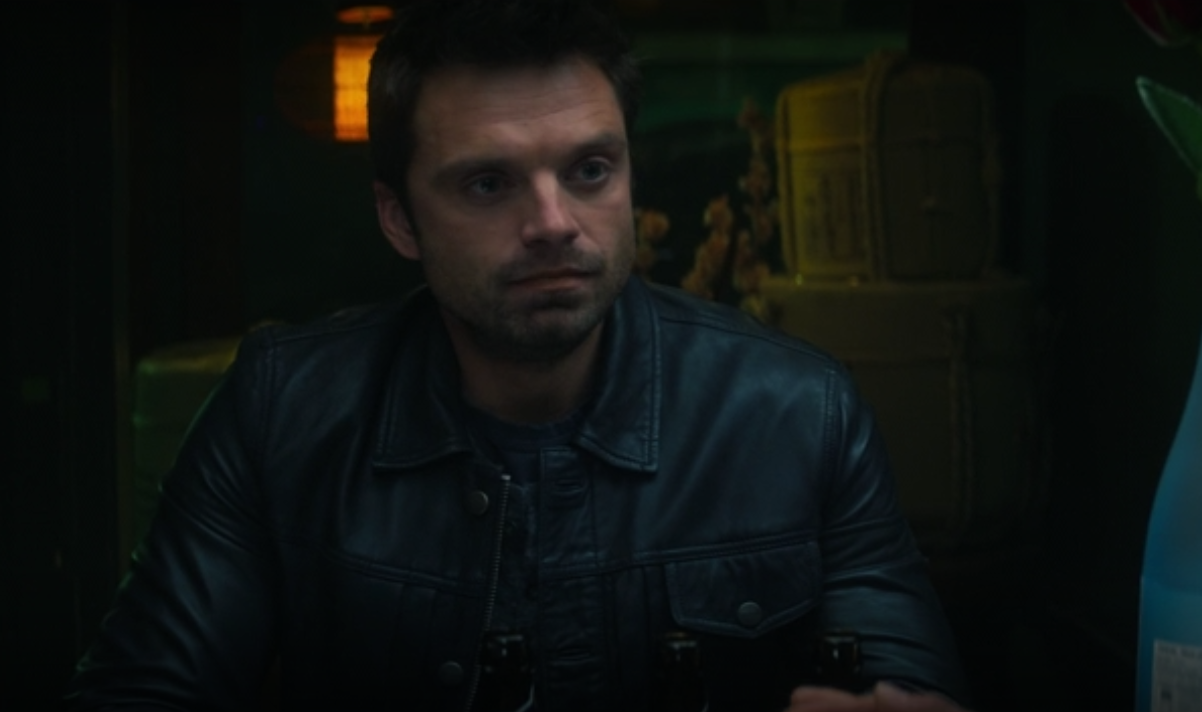 Chris P gives the show two stars out of five. He writes, “Not impressed with the opening episode. You have a big action scene and the rest is rather boring until you get the end of the episode when it starts to get good again. These series like WandaVision are not good for Marvel. They are badly paced and having to wait a week between each episode is ridiculous. Either the whole series needs to be dropped at once so the audience can decide how to consume them or Marvel just needs to stick to the movie format. After having to slog through WandaVision week after week, I’ve learned my lesson. I’ll just wait until the rest of the episodes have dropped and then binge them. I’m very disappointed in Marvel.”

Vivien V gives the show five stars. She writes, “So happy to see the MCU return to one of its best phases – The Winter Soldier – in terms of tone, action, music and character driven stories. Anthony Mackie is a powerhouse and you can just tell that playing Sam Wilson is an absolute joy for him. It all translates to the screen. And it finally feels like the writing is worthy of his dedication and talent, I can’t wait to see him shine more in this show.” 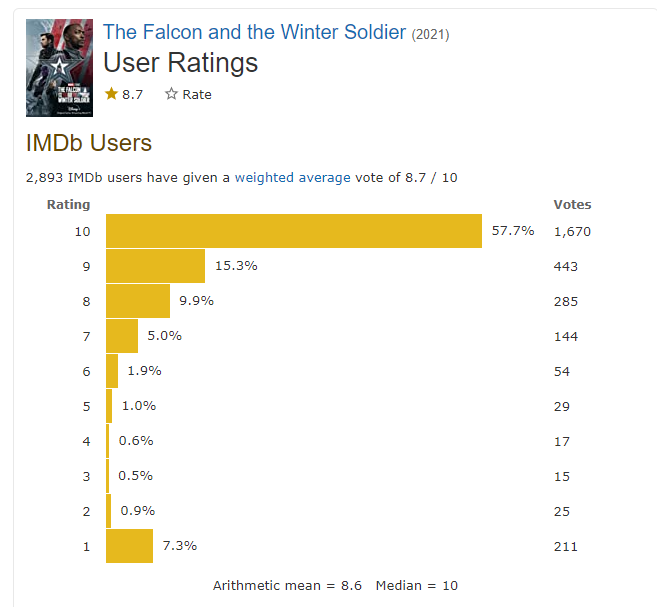 As for the age and gender breakdown, females gave the show a slighter higher rating with an 8.9 compared to males with an 8.6.

People between the ages of 18-29 also gave the show a higher rating compared to other age groups. 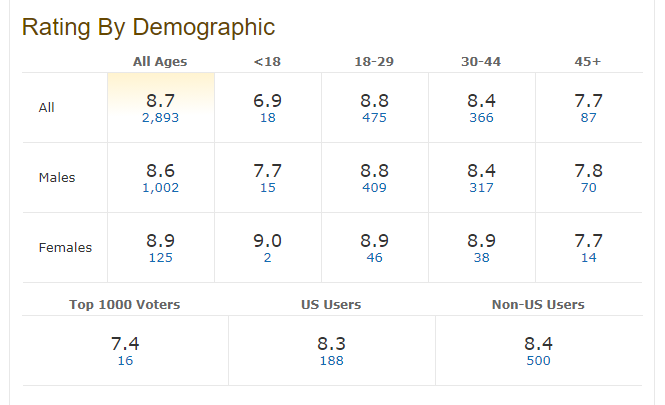 On Metacritic the show has a 6.2 User Score from 21 ratings. There are 12 positive ratings, 4 mixed ratings, and 5 negative.

Julius98 gives the show a 7. He writes, “Much more down to earth than Wandavision and refreshingly well-balanced. Some of the new characters don’t hit, but the action is top-notch and the character development starts off strong.”

Gogo1210 gives the show a 10. The user writes, “This is an amazing start for this series I cannot wait to see how this unfolds.”

Thisura gives the show a 0. The user writes, “not recommend at all. disappointing. just another MCU spin-off to please iron man fan boys. quality over content is not for cinema.” 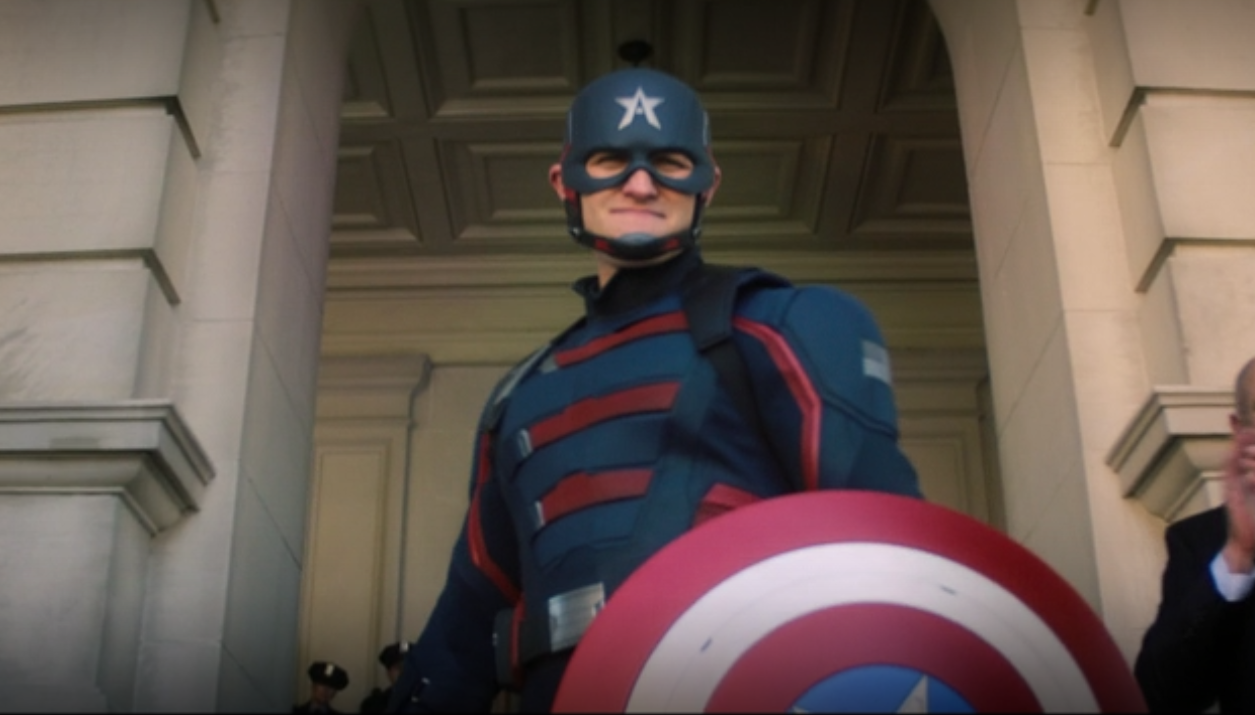 What do you make of these user scores and user reviews? What did you think about The Falcon and The Winter Soldier? Are you even watching it?