As reported by TheWrap’s Tim Baysinger, Dr. Phillip Atiba Goff, the co-founder and CEO of the Center for Policing Equity and his newly formed JusticeRx team signed a deal with WarnerMedia to create “original content informed by [Goff’s] work, as well as collaborate with the studio’s creative roster on projects centered around social justice.” 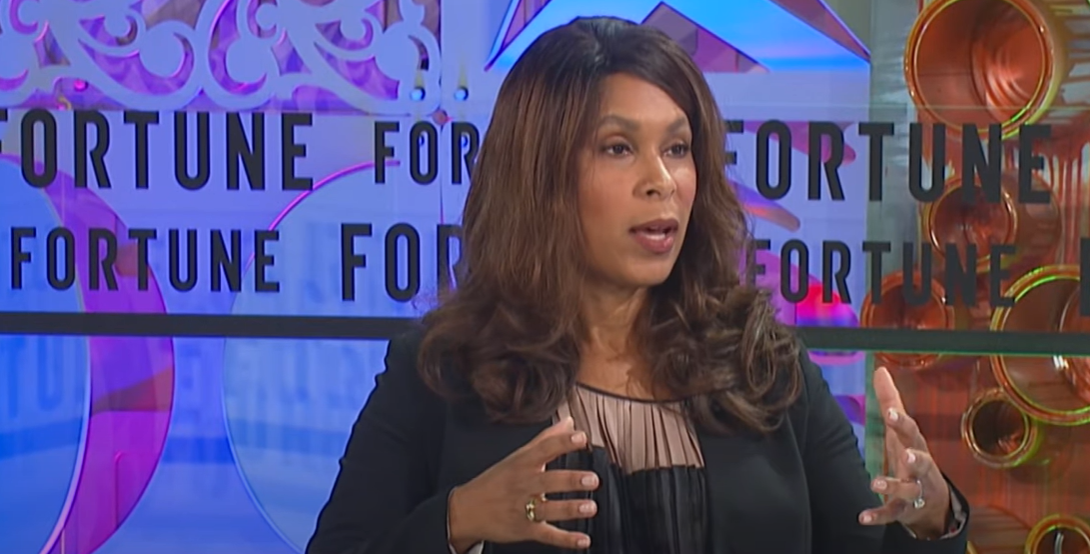 Warner Bros. Television Group chairman Channing Dungey announced Goff’s deal stating, “Dr. Phillip Atiba Goff has been a leading voice of moral clarity on critical issues facing our society, and through this creative partnership, we are honored to have the benefit of his insight, guidance and counsel here at the Studio.”

Dungey added, “We are also extremely excited to collaborate with Dr. Goff and his team to create powerful and compelling programming that will both entertain and inspire.” 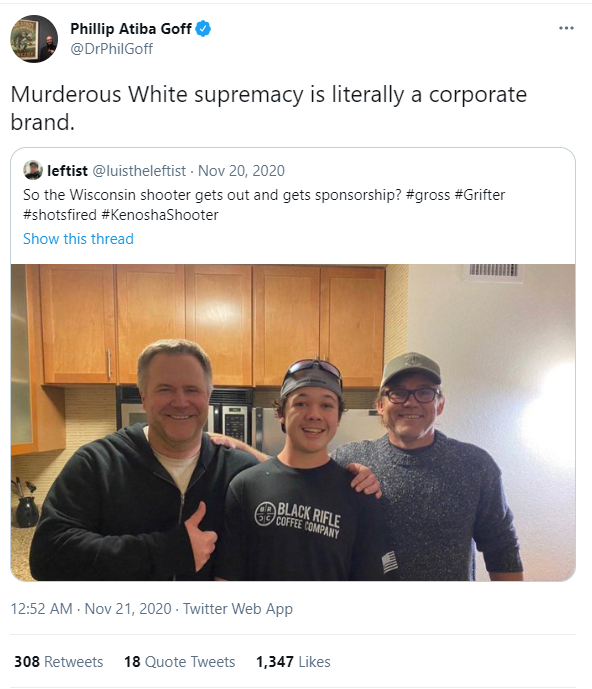 More recently, in response to a press conference given by Cherokee County Sheriff’s Captain Jay Baker, Goff wrote, “Not reposting that video, but we fetishize the internal states of White people all the time. Their motives are what matter for criminal charges. Their “bad day” is somehow relevant all the time.”

He added, “Stop defining the problem based on White minds. The problem is paid with our bodies.” 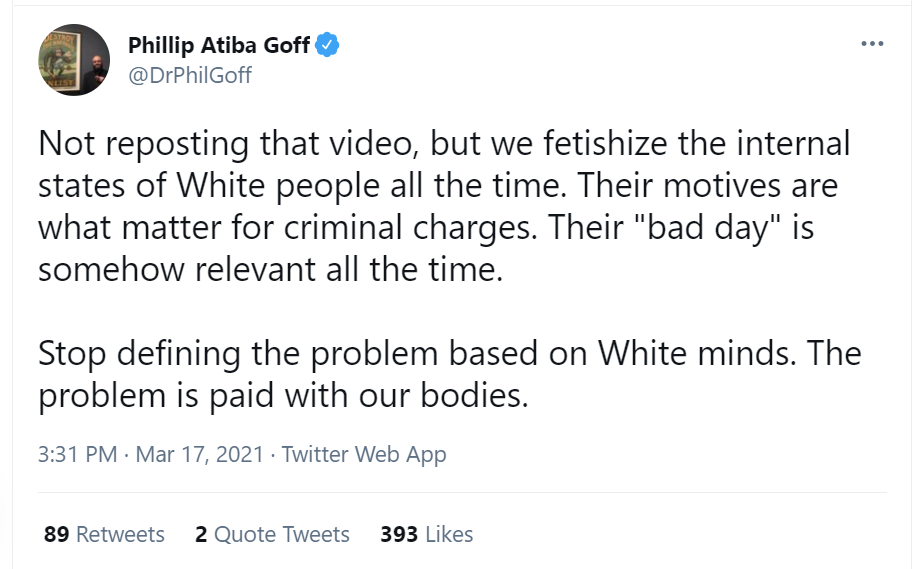 There’s probably a reason why Goff decided to not show the video, and that’s because Captain Baker was relaying to reporters what investigators had told him regarding their interviews of suspect Aaron Robert Long.

Captain Baker stated, “When I spoke with investigators, they interviewed him this morning, they got that impression that yes, he understood the gravity of it. And he was pretty much fed up and had been kind of at the end of his rope and yesterday was a really bad day for him and this is what he did.”

And as for his claim that motives are what matter for criminal charges, he’s completely wrong. Law Library clearly explains, “Proof of motive is not required in a criminal prosecution.”

Earlier on March 17th, Goff would write, “The exploitation of vulnerable communities is CONSISTENTLY pathologized in White folks, making White folks into victims and erasing—in this case—the literal body count left in the wake of that exploitation.” 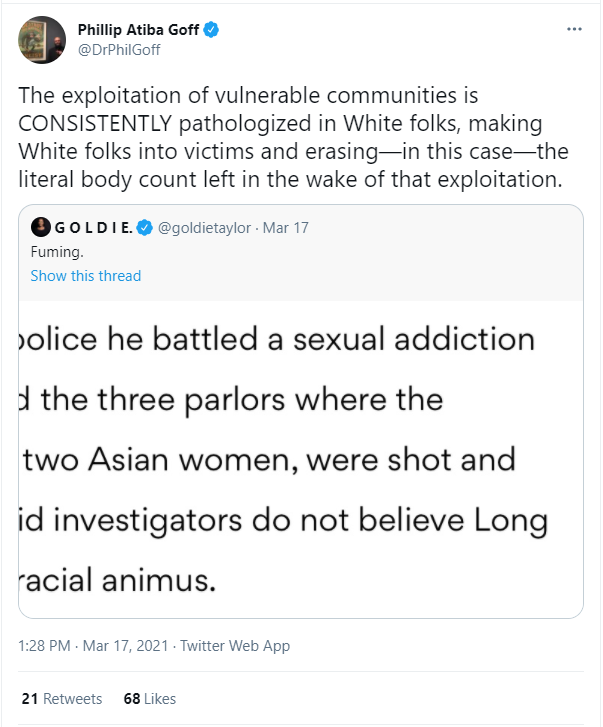 On March 21st, he wrote, “Have been learning more about racism in Native spaces and wanting to learn much more. White supremacy, like life, always seems to find a way.”

The tweet is in response to an article from BuzzFeed claiming the Seminole Nation in Oklahoma denied a COVID-19 vaccine to LeEtta Osborne-Sampson because she is a descendant of enslaved black people. 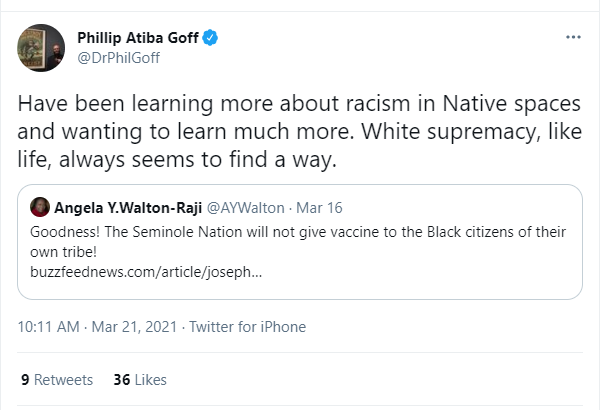 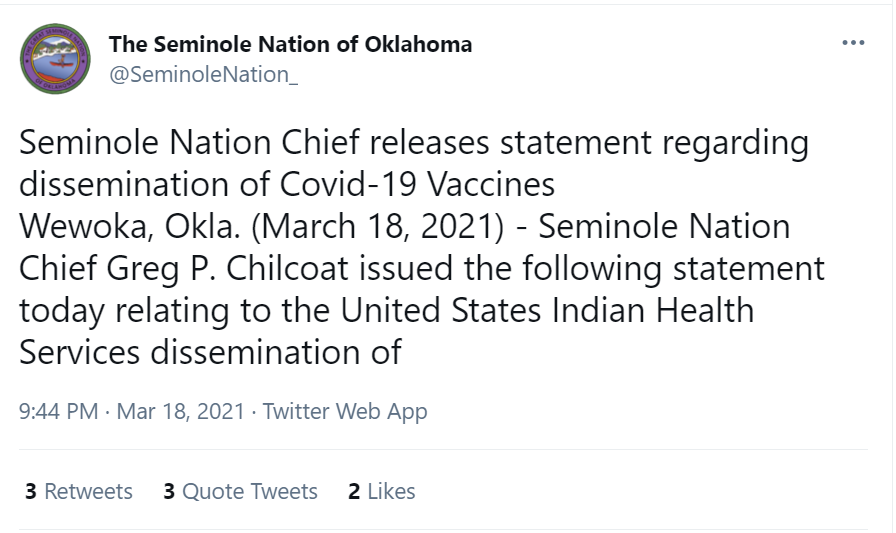 “The United States Indian Health Service is the entity in charge of administering Covid-19 vaccinations to the Seminole Nation, and it is the Nation’s understanding that such vaccine dissemination is being administered entirely consistent with federal law and policy in providing such vaccinations. Any allegation that the Seminole Nation is denying access of the Covid-19 vaccine to a group of people is entirely false.” 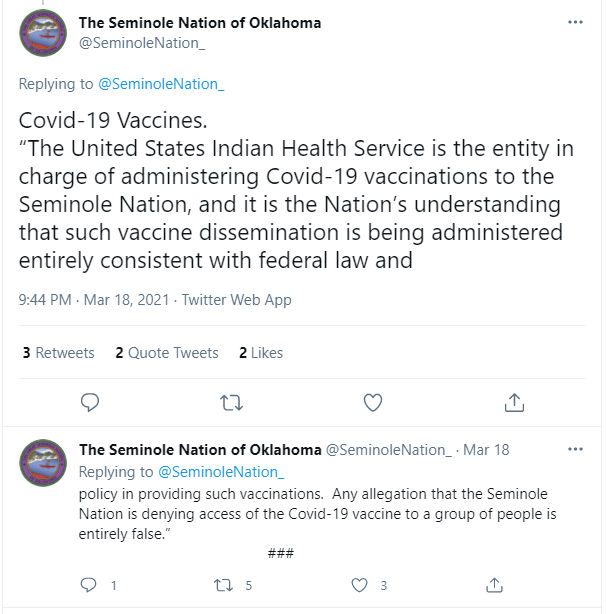 In February, Goff also wrote, “One party is debating whether or not they should be the party of White supremacy. The other is debating how much they should compromise with that party. I desperately need a nap.” 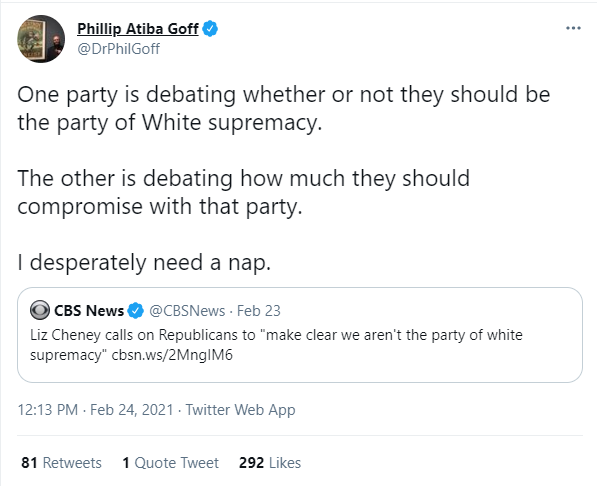 This is what WarnerMedia thinks is the “leading voice of moral clarity on critical issues facing our society.”

He is most definitely not despite what WarnerMedia wants you to believe.

Not only is he not a “leading voice on moral clarity on critical issues facing our society,” but he’s also an avid proponent in the Blue Anon consipracy.

For those unfamiliar with the conspiracy, Urban Dictionary defines it as thus, “A loosely organized group of Democrat voters, politicians and media personalities who spread left-wing conspiracy theories such as the Russia hoax, Jussie Smollett hoax, Ukraine hoax, Covington kids hoax, and Brett Kavanaugh hoax. Blue Anon adherents fervently believe that right-wing extremists are going to storm Capital Hill any day now and “remove” lawmakers from office, hence the need for deployment of thousands of National Guard stationed at the U.S. Capitol.” 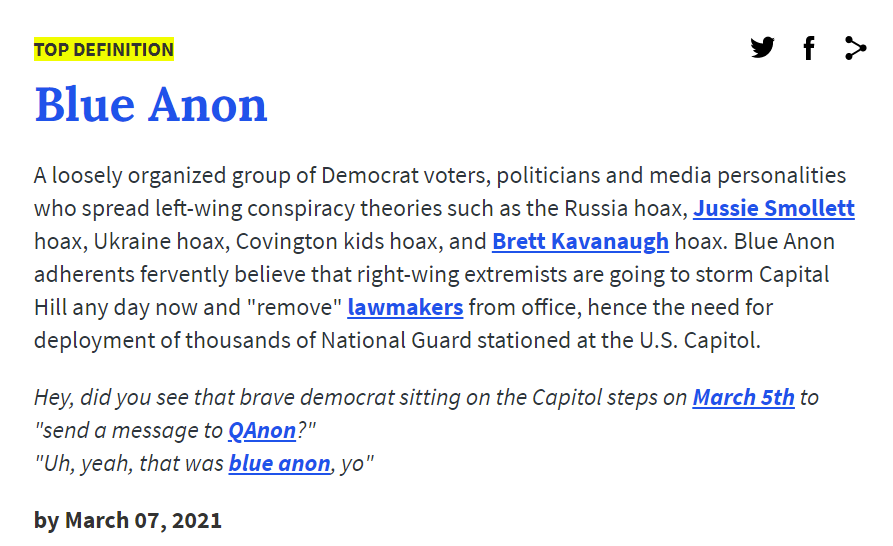 Goff promoted the Kavanaugh conspiracy back in 2018.

He posted to Twitter, “Yeah, no. No she is not. She is literally THE victim. Kavanaugh is literally the abuser. It is never OK to say that an abuser has the same degree of culpability as the person they abuse. America, I would love us to learn this lesson. Ever.” 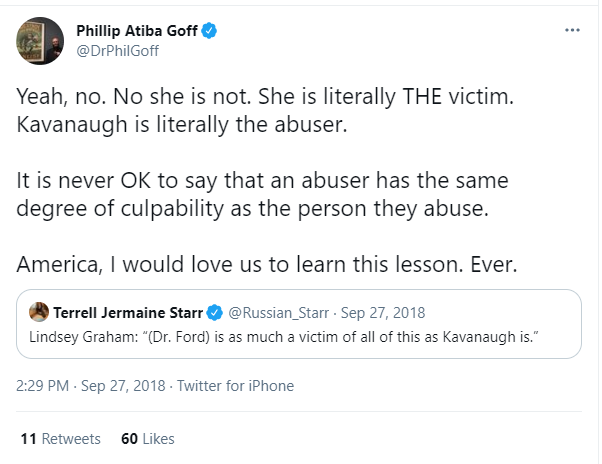 He also engaged with the Russia conspiracy as well.

In March 2017, he wrote, “How many cabinet members and staff need to resign due to ties with Russia before it’s a pattern?”

As for what Goff and his company have planned for programming at WarnerMedia, he stated, “This year, the world was reminded of the power stories have to define our lives. That creates an unprecedented opportunity to direct that power towards uplifting vulnerable communities.”

Goff then added, “Our goal will be to help storytellers un-tell the lies we tell about ourselves. I could not be more excited about this opportunity to work with the brilliant people at WBTV in that project.” 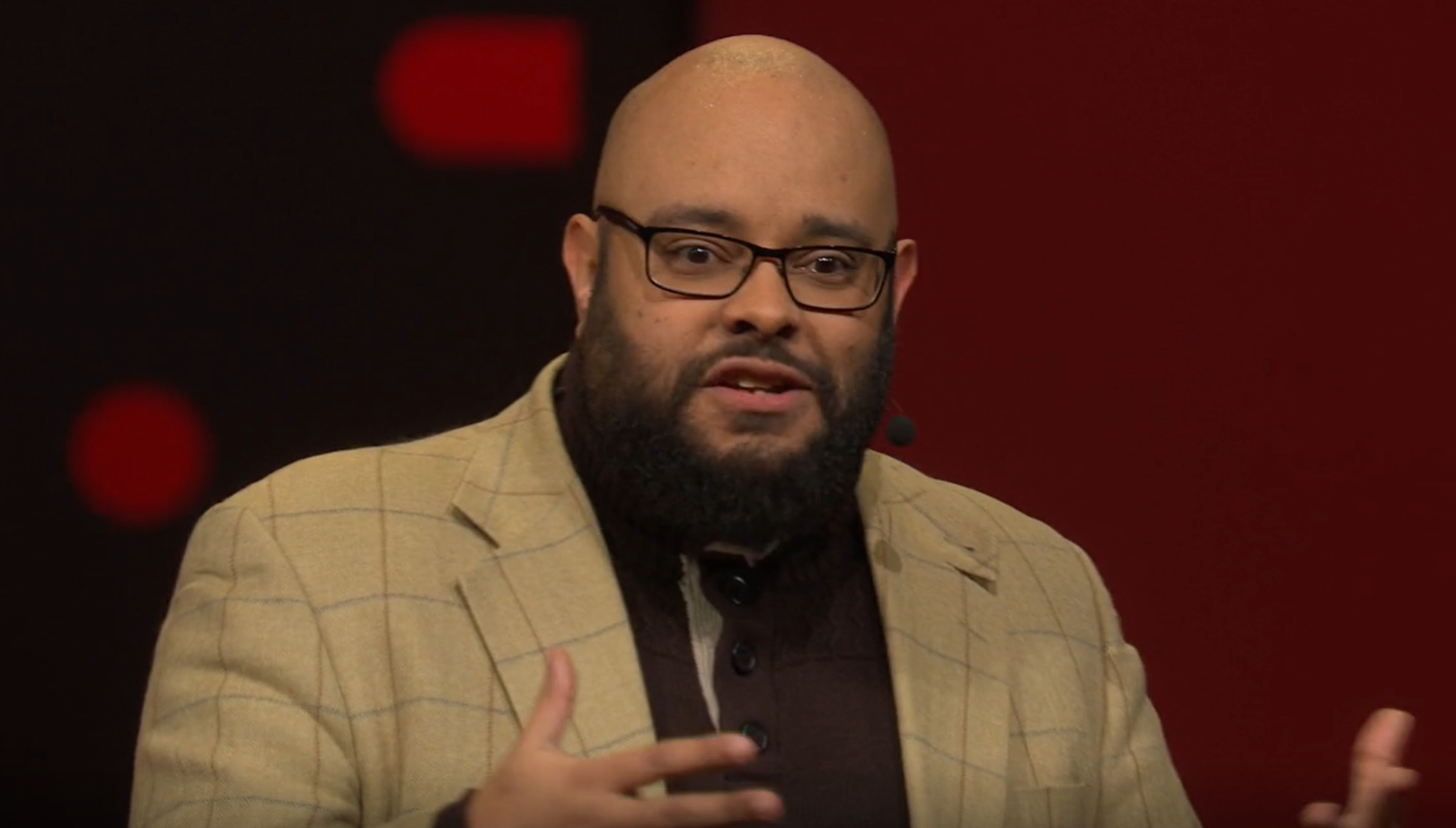 TheWrap reports the type of programming “could range from scripted dramas and comedies to docuseries and other unscripted projects for streaming, cable and broadcast networks.”

This announcement comes a day after WarnerMedia Studios CEO Ann Sarnoff declared, “We want DC to be a fandom that feels safe and inclusive. We want people to be able to speak up for the things they love, but we don’t want it to be a culture of cancelling things that any small faction isn’t happy with.”

She added, “We are not about that. We are about positivity and celebration.”

Seems pretty clear Goff’s deal is the exact opposite of that statement given his public statements on Twitter.