Wow. That got really heavy, really fast, didn’t it?

I know that past episodes have shown the Kents struggling with the trials and tribulations of their own individual issues, but this is the first time I think we’ve seen them all, including Clark, completely powerless in the face of their problems.

And by presenting such uncertainty amongst the lives of our protagonists, Superman & Lois continues to prove why it stands tall as one of the best shows in The CW’s DC lineup, if not across all television.

Related: Review: Superman & Lois Episode 3 – The Perks of Not Being a Wallflower – It’s Hard Out Here For A Dad

In my review of last week’s episode, the Perks of Not Being A Wallflower, I noted that in regards to Lois’ investigation into Morgan Edge, there wasn’t a lot to write about it, as despite being a prominent focus of the episode, it was more exposition and setup than anything else.

However, that episode-long setup pays off brilliantly this week, as in the latest episode, Haywire, Lois Lane takes center stage.

Following her assault by Edge’s metahuman goon in the last episode, Lois finds herself more resolute than ever to take down the less-than-honorable businessman.

Threatened with a lawsuit if she goes forward with publishing her expose and with Smallville set to vote on granting Edge exclusive rights to their local mines, Lois confronts Edge directly and lays down a proverbial smack-down on him, in what is not only one of the best scenes of the entire episode, but one of the best depictions of the intrepid reporter ever put to film.

Yet, despite her resolution, Edge’s looming lawsuit prevents her from speaking out during the town’s vote. Though she asks Clark to appear on her behalf to speak out against the deal, his duties as Superman prevent him from making an appearance, leading her opponent to actually “Edge” out a victory over Lois and her to realize that her tenacity will not be enough to win the war.

Meanwhile, the progress made by Clark and the boys in reestablishing their trust with each other is abruptly interrupted by a surprise visit from General Lane, who has a bone to pick with Clark over what he sees as the Man of Steel’s conflict of interest between his responsibilities as a father and as a superhero.

After Clark denies the General’s request to assist in the prison transfer of Intergang member Thaddeus Killgrave, in the first appearance of a villain taken from the pages of the comics, the General turns his attention to his grandsons. Having a word with the boys, General Lane warns them not to waste their father’s time, emphasizing that every moment he spends helping them with their problems is a moment where his absence puts the lives of others at risk.

This is where the episode takes the heavy turn I referenced before. Throughout the episode, audiences are shown that Jonathan and Jordan’s friend Tag has begun to develop powers, which sees any wound on his body heal following a short period of violent shaking.

Though he attempts to hide his newfound metahuman abilities from his friends and teammates, a moment of alcohol-fueled anxiety at a party leads Tag to losing control of his powers in a scene ripped almost straight from a horror movie.

With their father in Metropolis to deal with Killgrave’s unsurprising breakout (I mean, the guy’s a supervillain, did anyone really expect any other outcome?), Jonathan and Jordan attempt to take their grandfather’s advice and deal with the situation themselves.

However, they soon find themselves completely overwhelmed and in desperate need of their father, who puts a decisive end to Killgrave’s attempts to escape just in time to return to Smallville and help Tag.

In the aftermath, Lois and Clark chew out General Lane for his attempt to subvert their parenting style with their sons, with Clark in particular firmly asserting that his duties as a father would always supersede his responsibilities as Superman.

Though he begrudgingly accepts Clark’s decision, General Lane’s fear and paranoia of Superman, based on Captain Luthor’s ominous warnings, finally push him past his comfort tipping point. As the episode draws to a close, Lane orders his men to begin preparation of a ‘Superman contingency plan’.

As an aside, the episode also has a little bit of development for Lana and her family. However, it’s so brief and, in regards to the larger events of the episode, inconsequential, that there’s not a lot to talk about.

I’ve always enjoyed stories where the heroes “lose”, as it humanizes the characters and allows opportunity for them to show their true mettle in the face of failure. With “Haywire”, in just one episode, Superman & Lois has shown how its main cast deals with overwhelming adversity not just as individuals, but as a family.

Like I mentioned at the top, “Haywire” is an episode in which the Kent’s find themselves powerless in the face of their own problems. Lois loses against Edge, the boys have no idea how to help Tag, and Clark has to accept that his dual-life stretches him thin, sometimes dangerously so.

This is where the drama of the episode stems from, and it’s written in such a way that everything feels not only grounded, but also relatively realistic. Take away the super powers and mysterious yellow kryptonite in Smallville’s mines, and viewers can probably recall a number of times they experienced the same struggles the Kents’ have.

It’s honestly a breath of fresh air compared to the other CW DC shows. Whereas shows like The Flash or Legends of Tomorrow attempt to almost force empathy for their characters through intrapersonal conflicts and melodrama, Superman & Lois instead portrays their cast as real people and elicits empathy through the relatable and human situations its characters find themselves in.

Over the last few episodes, I’ve regularly noted that, for a series bearing his name, Superman & Lois features a distinct “lack of Superman”. However, with “Haywire”, I’ve come to realize that’s actually to the series’ advantage.

If Clark were to appear as Big Blue more often, standing around in his suit while having regular conversations or fighting more constrained-by-tv-budget supervillains, it would absolutely diminish the shock and awe felt when seeing him appear to save the day. Instead of too much of a good thing, Superman & Lois gives us just the right amount of superheroics to establish the near-mythical nature of Superman.

On that note, there is one detail within the episode that I found particularly impressive, and that’s how casually the citizens of Metropolis treat seeing Superman. To them, it’s just another day in the city, same old, same old.

I love that, as in reality, yeah, someone who sees the Last Son of Krypton nearly everyday would eventually come to consider his appearances to be nothing more than an unimpressive side-effect of living where he operates.

Honestly, for me, the best part of this episode was Lois. In a current social climate where reporters who find themselves on the ‘losing end’ of a situation or argument more often than not turn to blaming others for their failures and throwing social media tantrums, it’s refreshing to see one who acts with tact and integrity.

It’s even more refreshing, especially in light of the sometimes overbearingly melodramatic relationships seen between Barry and Iris or Ollie and Felicity, to see someone handle their relationship problems in a mature and cooperative way.

There is one element of this episode, however, that seemed to be a bit forced, and that’s General Lane’s sudden turn to creating a contingency plan for Superman.

I know that we’ve been shown he’s concerned with both Superman’s duties as a father and Captain Luthor’s warnings, which appear to have shaken him to his core, but it feels like way too extreme of a decision to make in response to Clark simply reaffirming his duties as a father.

But you know, now that I’ve recapped the entire episode, I’ve come to realize that it may not even be an ‘anti-Superman’ measure, given that General Lane’s main concern is Big Blue’s availability to save the world. The more I think about it, it’s possible that General Lane could be creating some sort of Superman-replacement.

This is pure speculation on my part, but it’s possible that Lane’s paranoia could lead to the appearance of Bizarro, or even Cyborg Superman himself. If that’s where the series goes, please retroactively ignore my entire complaint about General Lane’s decision. 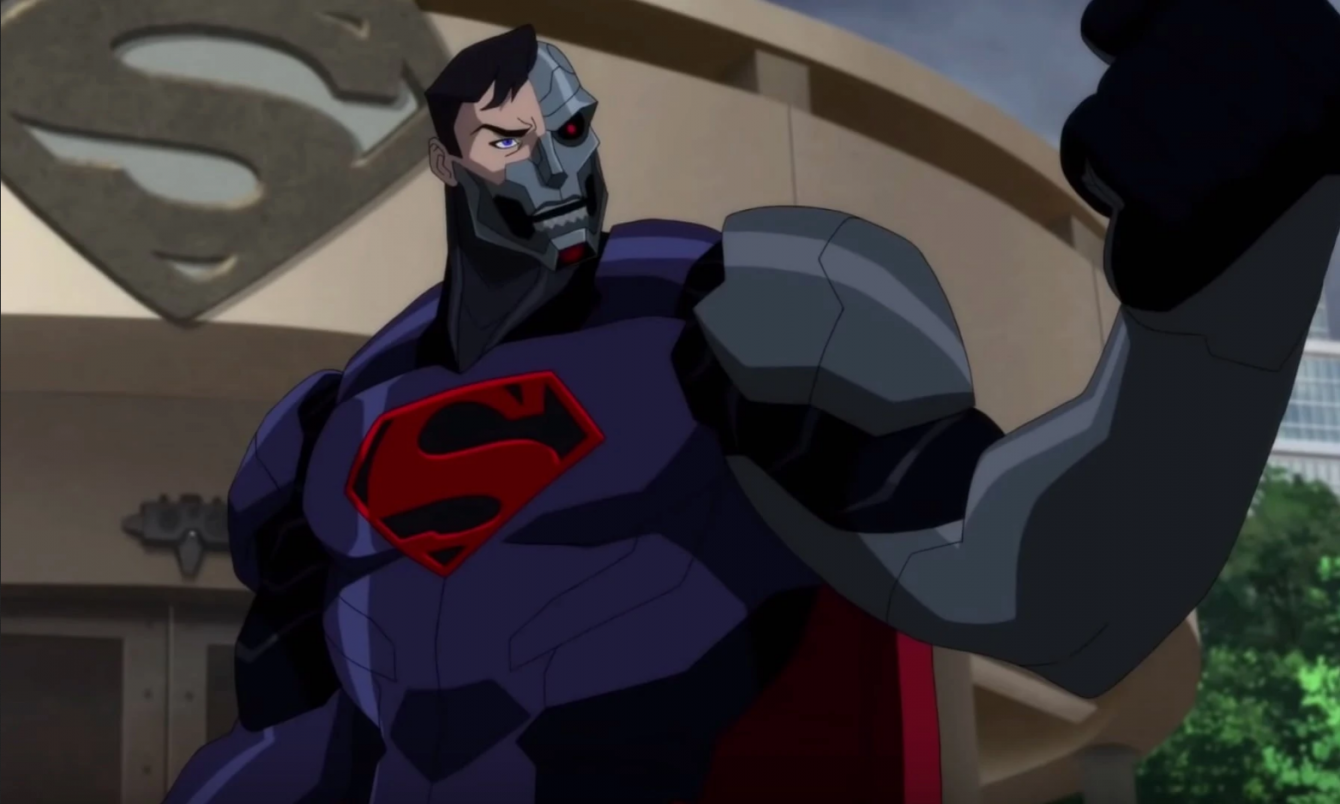 Overall, Haywire proves both that a superhero show doesn’t necessarily need to be flush with instances of superheroes to be entertaining, nor does it have to be filled with petty melodrama in order to foster empathy for its characters. I don’t remember the last time I was this excited to watch a Western television show week-to-week, but hats off to The CW, as I am fully invested in the Kent family and their future.