It’s time to button up your flannel shirts and steel yourself for more corn mazes than you can shake a stick at, as this week, Superman & Lois takes us to the Harvest Festival, Smallville’s annual hotspot of fried food, charitable donations, and more than enough teenage angst to go around.

Last week, Jonathan and Jordan’s personal issues took a step back from the spotlight, as the two boys found themselves more concerned with attempting to help their friend Tag deal with his budding super powers than their own drama.

However, in “The Best of Smallville,” their respective struggles return to center stage as the boys continue to find themselves adjusting to small town living.

For Jordan, it’s an almost positive struggle, as the newfound confidence he’s gained from his membership on the football team finally leads Sarah to ask him out on a proper date to the aforementioned Harvest Festival.

Conversely, Jonathan continues to feel as if the world is against him, as not only has he found himself on the low-rung of the social ladder, but the episode opens with him being dumped by his girlfriend due to the complications of a long-distance relationship.

Eventually, their opposing trajectories collide at the Harvest Festival, where Jonathan, who has attempted to numb his feelings of loneliness with a bit of underage drinking, drunkenly interrupts Jordan’s date with Sarah during a particularly heavy moment. As a result, Sarah realizes that she needs a friend more than a romantic partner, quashing (at least for now), her romance with Jordan.

Thankfully, this triangle of conflict avoids going full The CW, as instead of unreasonable lashing out and seemingly intentional miscommunications between the characters, Jordan, Jonathan, and Sarah are able to resolve their conflicts respectfully.

In particular, Jordan shows a great level of maturity, especially for someone with social anxiety disorder, accepting Sarah’s friendship without whining and understanding his brother’s drunken outburst rather than holding it against him.

Meanwhile, Lois’ investigation into Morgan Edge is derailed by the sudden reappearance of Derek Powell, whose initial disappearance while working for the corrupt businessman had prompted his mother, Sharon Powell, to seek out the reporter’s assistance in exposing Edge’s shady practices.

Though Derek appears to have no memory of his missing time, Sharon asks Lois to drop the investigation, reasoning that since her son is back, there’s no reason to continue digging any further.

Stuck between Powell’s return, which torpedoes the entire basis of her expose, and Edge’s threat to sue her if she continues her work, Lois surprisingly calls for a strategic retreat to reassess the situation, much to the surprise of the Smallville Gazette’s only other employee, Christy Beppo.

(Also, I’m not sure we’ve mentioned her character before, as she’s been relatively minor up until now, but I would like to point out that, yes, her name is a reference to Superman’s pet monkey.) 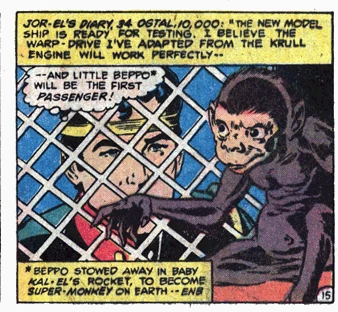 In the wake of a fire at Smallville’s local church, unbeknownst to the town’s residents to be the result of Derek’s discharge of his apparently newfound heat vision, Christy decides to follow in Lois’ example and delve headfirst into the story on her own. Secretly following Derek, Christy, stumbles upon his rather odd connection to Edge’s red-headed, heat-vision wielding assistant, Leslie Larr.

Receiving a phone call from a scared and confused Chrissy who relays to her the baffling discovery, Lois immediately calls in Clark for help, who arrives to find Derek entering into a strange machine powered by the mysterious object discovered by Edge in last week’s episode-opening flashback.

The two men proceed to battle, with Derek trying to lose Superman by attempting to cause wanton damage to Smallville’s property and farms, only for Big Blue to swiftly put an end to these efforts with his own abilities.

Finding himself outmatched and sick from what appears to be a side effect of whatever process gave him his abilities, Derek proceeds to fry himself from the inside out, in one of the most brutal death scenes I’ve seen in a while.

Following in last week’s footsteps, this episode also features more focus on Lana and the marital strife plaguing her family. Yet, similarly to last week, I personally found it all to be uninteresting as though the moments focused on the Cushings gave their problems a little bit more depth, they did little to actually advance the plot line.

Without Indie Navarrette, who continues to deliver some of the series’ strongest and most convincing performances, the Cushings’ story would be outright unbearable.

In fact, the episode’s most interesting moment featuring a member of their family was when Kyle took note of the frost left behind by Clark’s use of his ice breath to put out the fire started by Derek. And of course, that was because of the appearance of Superman!

There is one lingering question that both myself and fellow Bounding Into Comics writer Donald Edmonds can’t get over: Why did Superman and Lois just forget about the machine?

I mean, they didn’t even bother to check it out at any point after the fight with Derek. Seems like a huge oversight to just not follow up on one of the biggest smoking guns of your entire case.

Speaking of Superman, this episode also features the return of Captain Luthor, in an appearance that finally allows actor Wolé Parks the chance to actually, well, act.

In the moments Parks is on screen, he does an excellent job of selling Luthor as a slightly-unhinged man playing a larger game. Personally, I’m thankful he got the chance, because his time outside of the suit actually made me loosen up to his character more.

However, whatever goodwill Luthor had built up was -immediately- lost with the episode’s oh-so-convenient reveal that he was once in a relationship with his Earth’s Lois Lane.

It just feels so lazy and contrived. Luthor’s rage towards Superman being the result of the other-universe Kryptonian’s general destruction of his Earth’s world and society was interesting enough on its own. He doesn’t need a hamfisted, one-in-seven-billion romance with one of the series’ three age-appropriate female characters to make his arc entertaining.

In fact, I’d say this twist is so terrible, it made me end up disliking the character more than I had before.

While on the subject of things I disliked more than before, I know I’ve been okay with his sparing uses throughout the series first four episodes, I’m definitely ready to see some more Superman.

I’d even argue that this episode should have spent the time it gave Clark’s flashbacks to his time growing up with his mother, which felt almost disconnected from the main story outside of the base parallel between him and Jonathan’s shared desire to leave home in their teenage years, to his time in the tights.

He could have even followed up on the aforementioned alien-rock-powered machine, which would have undoubtedly given him numerous opportunities to show off his vast array of powers.

Overall, The Best of Smallville is not quite the best of Superman & Lois, but it’s another entertaining entry in a series that continues to take me by surprise with its sheer quality.

In fact, I am legitimately frustrated that this is the last episode of Superman & Lois before it goes on hiatus to make way for Supergirl’s final season. I don’t have enough metaphors for how awful of a decision that is.

I only hope that, upon its return, Superman & Lois retains not only its signature quality, but also its continually growing fanbase. After all, quality comic book content like this is now few and far between.