Update: Nick Cole has provided further clarification on his comments. He claims he was not referring to Disney in his original tweet thread.

He tweeted, “Also to clarify, as there’s been some confusion: I did not name the Studio that called our audience ‘White Christian Trash.’ It’s a major studio. But I am not naming it as this time and I’m not implying on this thread that it is either Disney or ABC.” 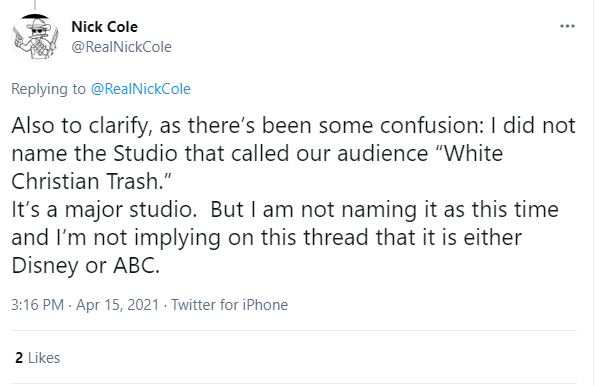 According to The Hollywood Reporter, Walden appeared on a panel put on by Chapman University and Glamour with Amazon Studios chief Jennifer Salke. 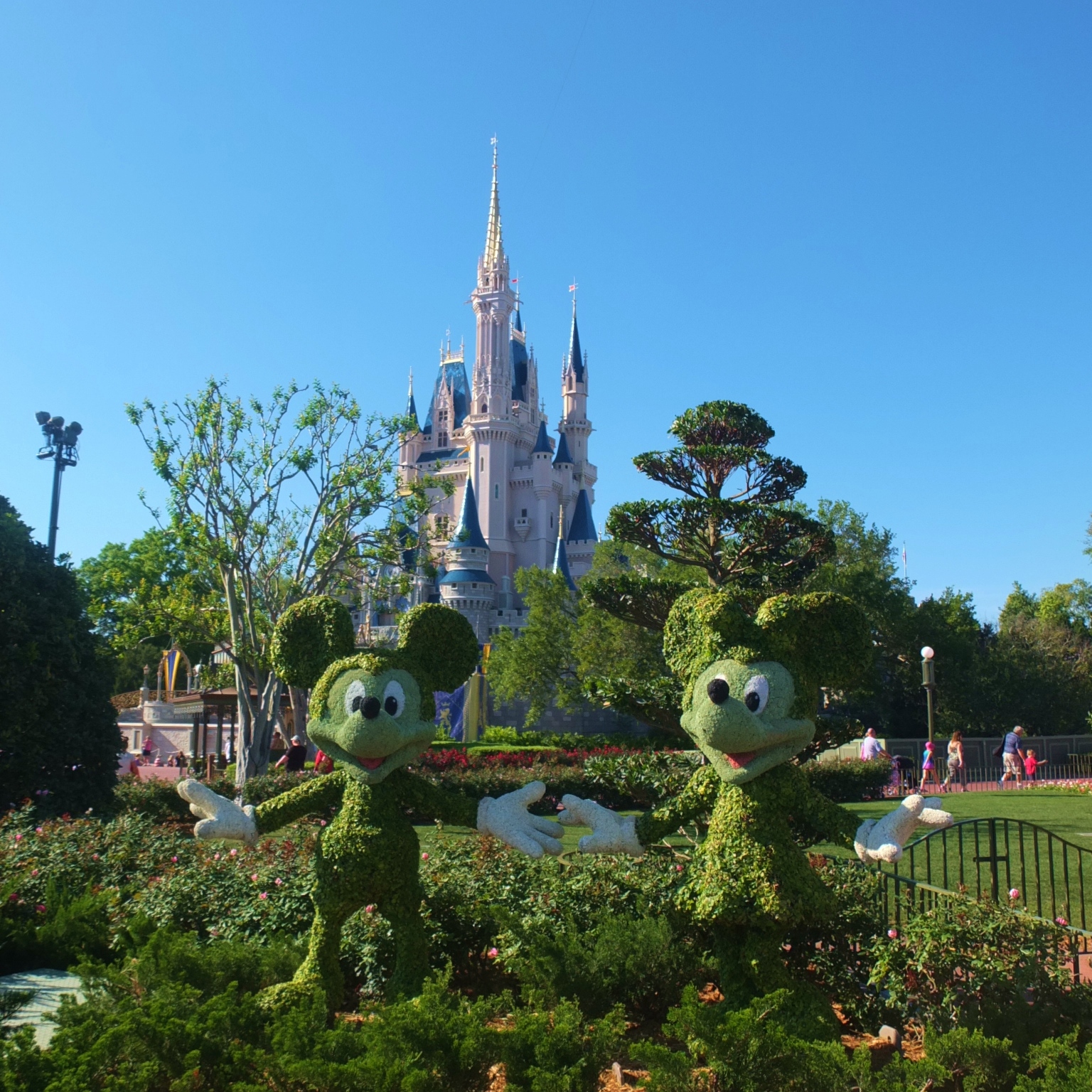 During the panel Walden referenced ABC’s new affirmative action policies that the company rolled out back in September 2020.

An email announcing the policies was published by The Hollywood Reporter that claims the “new guidelines are intended to make our content and our sets as inclusive as possible, and will serve as further catalyst for real and sustained change.” 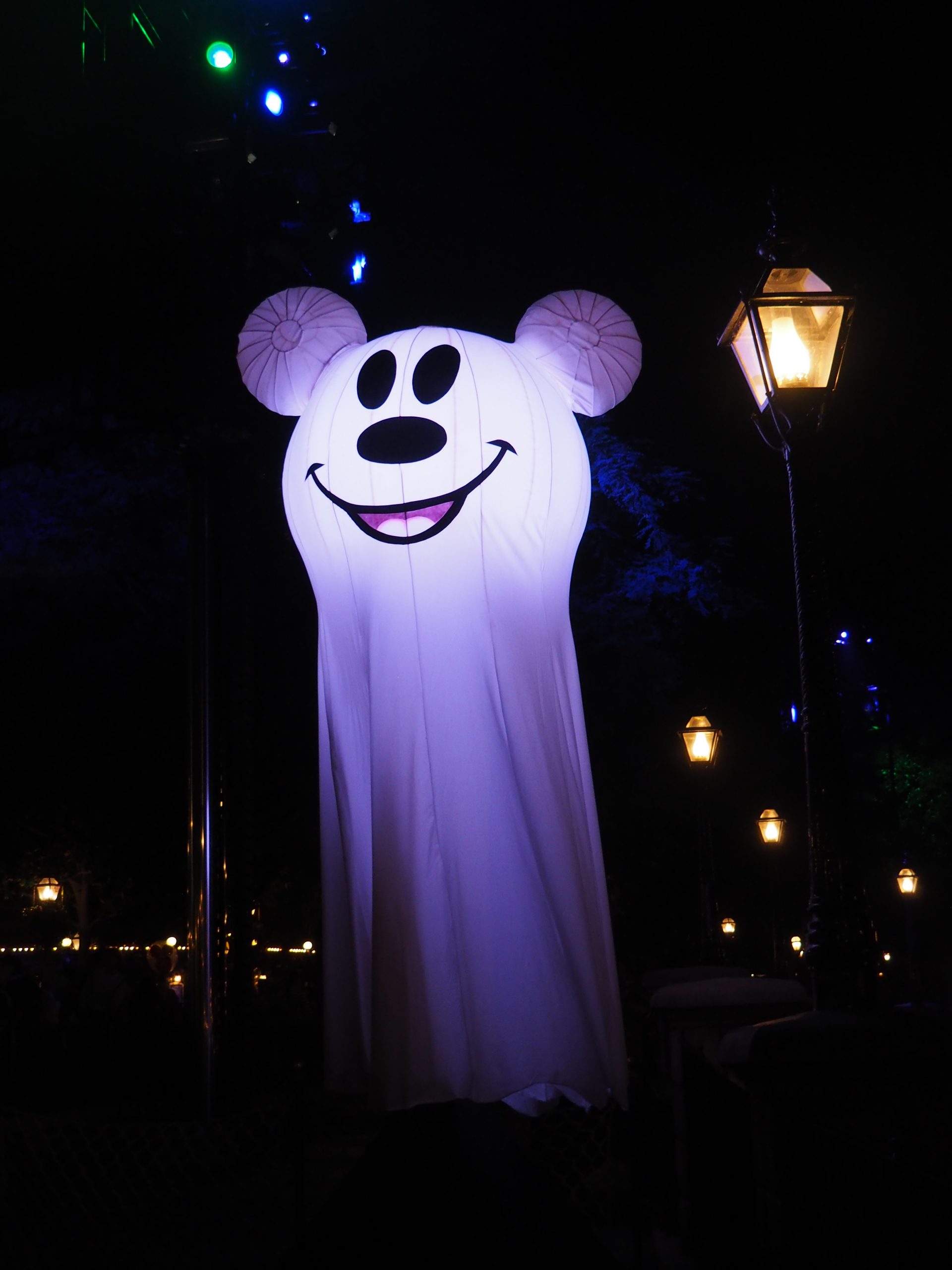 To get an idea of the policy, the On Screen Representation requires at least three of the following standards to be met: 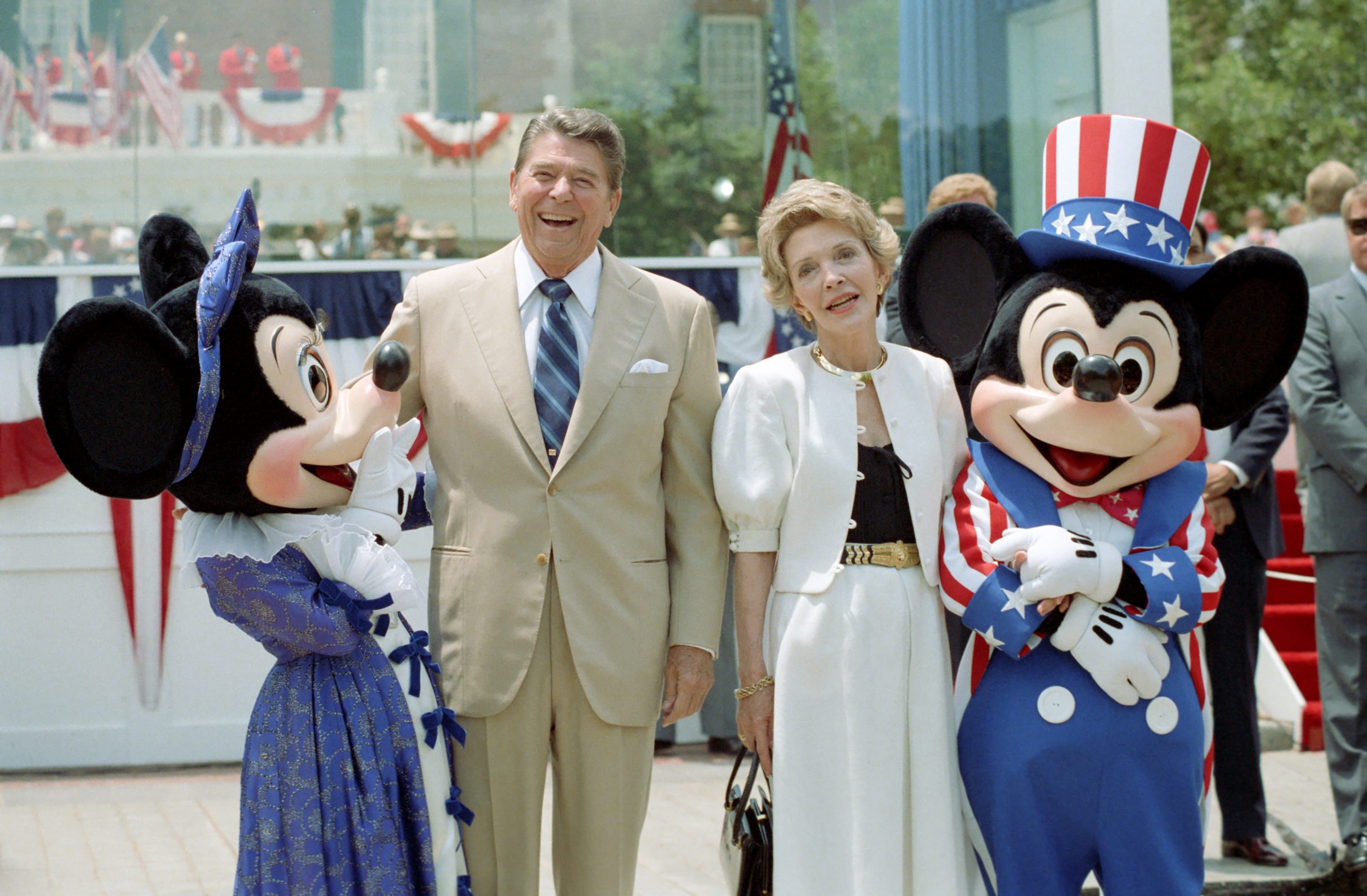 Those standards are definitely in effect as Walden stated on the panel, “I will tell you for the first time we received some incredibly well-written scripts that did not satisfy our standards in terms of inclusion, and we passed on them.”

The Hollywood Reporter’s Chris Gardner would provide an example of a script Walden received. He wrote, “Walden cited an example of receiving a script centered on a white family with the assumption that the diversity would come with the neighbors.”

Walden stated, “Pass. That’s not going to get on the air anymore because that’s not what our audience wants. That’s not a reflection of our audience, and I feel good about the direction we’re moving.” 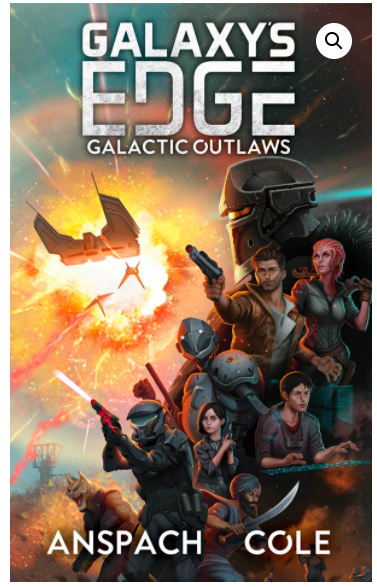 Cole would respond to these comments from Walden on Twitter. He wrote, “Can confirm. Was told regarding a project I helped conceive ‘we wouldn’t produce content for White, Christian, Trash.'”

He added, “There was nothing White or Christian in the military SciFi opera script we were pitching. The turd was referring to our audience.” 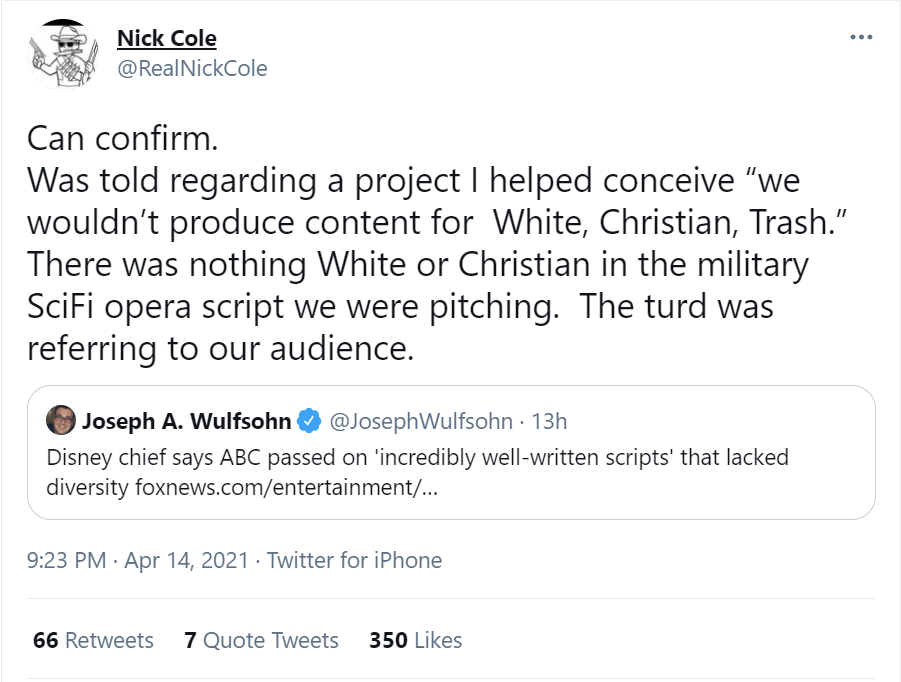 Cole followed that up writing, “Hollywood is a place filled with the worst people who somehow think they hold the moral high-ground about what gets made while raping girls and molesting small children.

“If Hollywood were a person you wouldn’t let them sit on your couch,” he added. 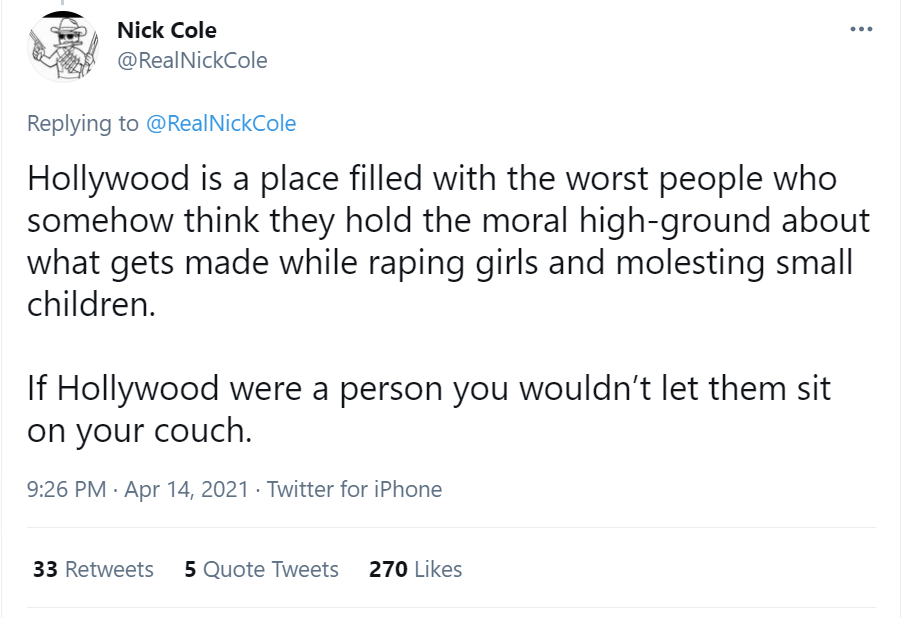 He concluded the thread writing, “Your life would be a lot better and fuller if you stopped watching movies made by deviants and drug addicts. You’d be smarter, thinner, and richer. And your children wouldn’t be destroyed. Seriously.” 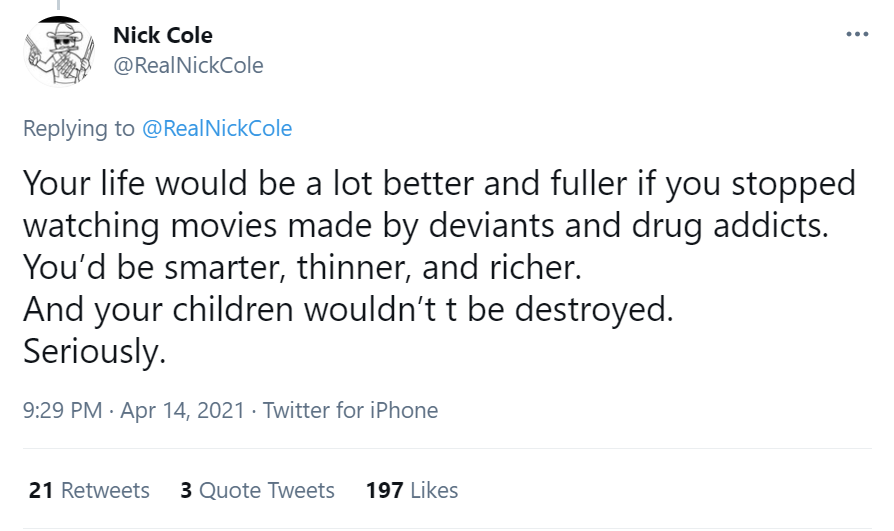 What do you make of Cole’s comments?

**Editor’s Note: The headline of this article has been updated following an update from Nick Cole clarifying his original tweets.**