President Donald Trump roasted The Academy Awards and The Oscars following the show’s abysmal ratings this past weekend.

The Oscars viewership plummeted to an all-time low of 9.85 million with a 1.9 rating in the key 18-49 demographic.

The ratings have been in consistent decline since 2014, where Nielsen reported total viewership was 43.7 million. It also had a 13.1 rating in the 18-49 demographic and was hosted by Ellen DeGeneres.

President Donald Trump responded to these low numbers via a press release.

He wrote, “What used to be called The Academy Awards, and now is called the ‘Oscars’ – a far less important and elegant name – had the lowest Television Ratings in recorded history, even much lower than last year, which set another record low.”

He continued, “If they keep with the current ridiculous formula, it will only get worse – if that’s possible. Go back 15 years, look at the formula they then used, change the name back to THE ACADEMY AWARDS, don’t be so politically correct and boring, and do it right.”

The president concluded, “ALSO, BRING BACK A GREAT HOST. These television people spend all their time thinking about how to promote the Democrat Party, which is destroying our Country, and cancel Conservatives and Republicans. That formula certainly hasn’t worked very well for The Academy!” 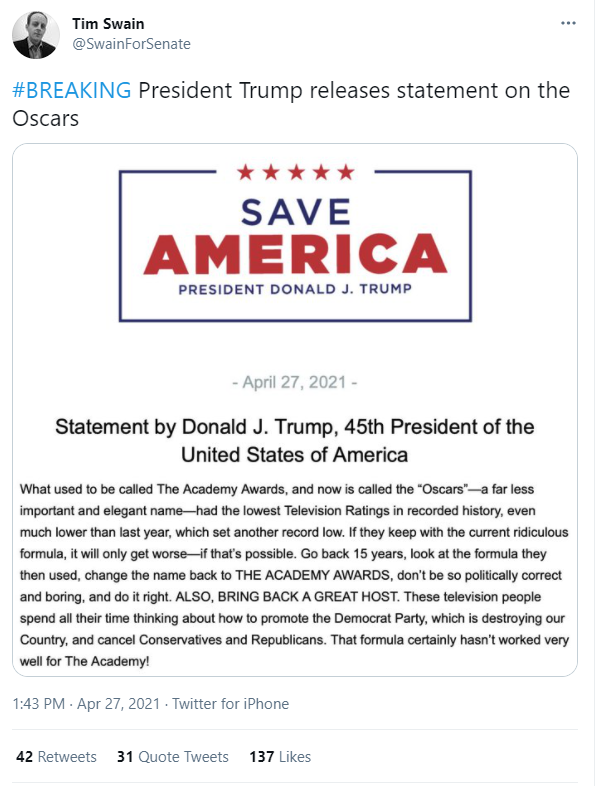 The Oscars have not had a host since 2019 when Kevin Hart announced he stepped down from the role after he came under attack for old stand-up jokes he made.

Hart tweeted at the time, “I have made the choice to step down from hosting this year’s Oscar’s….this is because I do not want to be a distraction on a night that should be celebrated by so many amazing talented artists.”

He added, “I sincerely apologize to the LGBTQ community for my insensitive words from my past.” 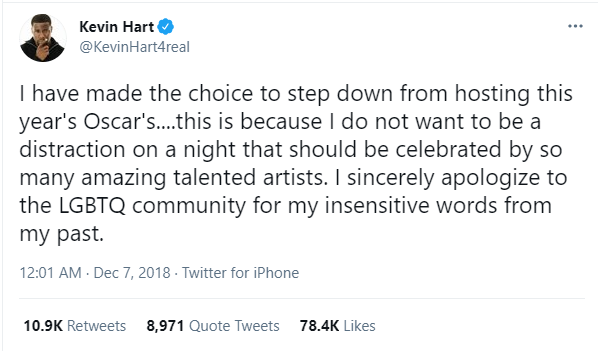 What do you make of President Trump’s response?