Hollywood actor and left-wing celebrity Alec Baldwin has recently taken to social media to speak out against cancel culture — expressing how he doesn’t really approve of the practice.

The actor continued, “Functioning objectively. No prejudice. No code. Just destroy. The deserving and the undeserving alike.”

Interestingly enough, a day before he called out cancel culture, the actor had shared a tweet that seemingly alluded to the same mob. It was a rather passive aggressive tweet that called out the cancel culture mob, and threw some jabs at the U.S. Congress.

“There appears to be a zero tolerance policy for bad behavior everywhere except where it matters most: the US Congress,” read the tweet shared by Baldwin.

While the actor doesn’t explicitly reveal why he’s suddenly decided to condemn these sort of practices, we may have a pretty good idea what the reason behind Baldwin’s rather surprising take on cancel culture is.

In December of last year, Alec Baldwin’s wife, Hilaria, was targeted by the cancel culture mob, after being accused of cultural appropriation, and putting on a fake Spanish accent when speaking in English.

The actor’s wife explained the situation on her Instagram account, stating that “I was born in Boston and grew up spending time with my family between Massachusetts and Spain.

Hilaria continues, “My parents and sibling live in Spain and I chose to live here, in the USA. We celebrate both cultures in our home.”

She proceeded to explain that “Alec and I are raising our children bilingual, just as I was raised. This is very important to me. I understand that my story is a little different, but it is mine, and I’m very proud of it.”

At the time Hilaria was being attacked by the cancel culture mob, Alec Baldwin stepped up to defend his wife, and call out the mob, although he never used the term “cancel culture,” sharing a video on his Instagram; urging people to “consider the source” when accusing others.

“You have to consider the source. We live in a world where we’re hidden behind the anonymity of social media, and people feel like they can say anything. They want to spray it all over you and spit it all over you — their venom and their hate.”

It’s pretty rich of Alec Baldwin to start condemning cancel culture when he has shared some inflammatory messages on social media, especially ones that involved President Donald Trump and the people who have voted for him.

In January of this year, for instance, Baldwin tweeted, “I had a dream Trump was on trial for sedition. And outside the courthouse, a noose was hung from a makeshift scaffold. The noose was made of recycled Covid masks.”

Let’s not forget that Baldwin also made some petty comments about Donald Trump supporters, going as far as stating that those who voted for the former president are “mentally ill” individuals.

“Trump has reached for, and nearly gained, a control of the federal govt unrivaled by other Presidents. He fired huge numbers of govt professionals,” Baldwin asserted.

The actor continues, “He steamrolled the Congress, whenever possible. And now this.” He went on to state that “If you vote for Trump again, you are mentally ill.” 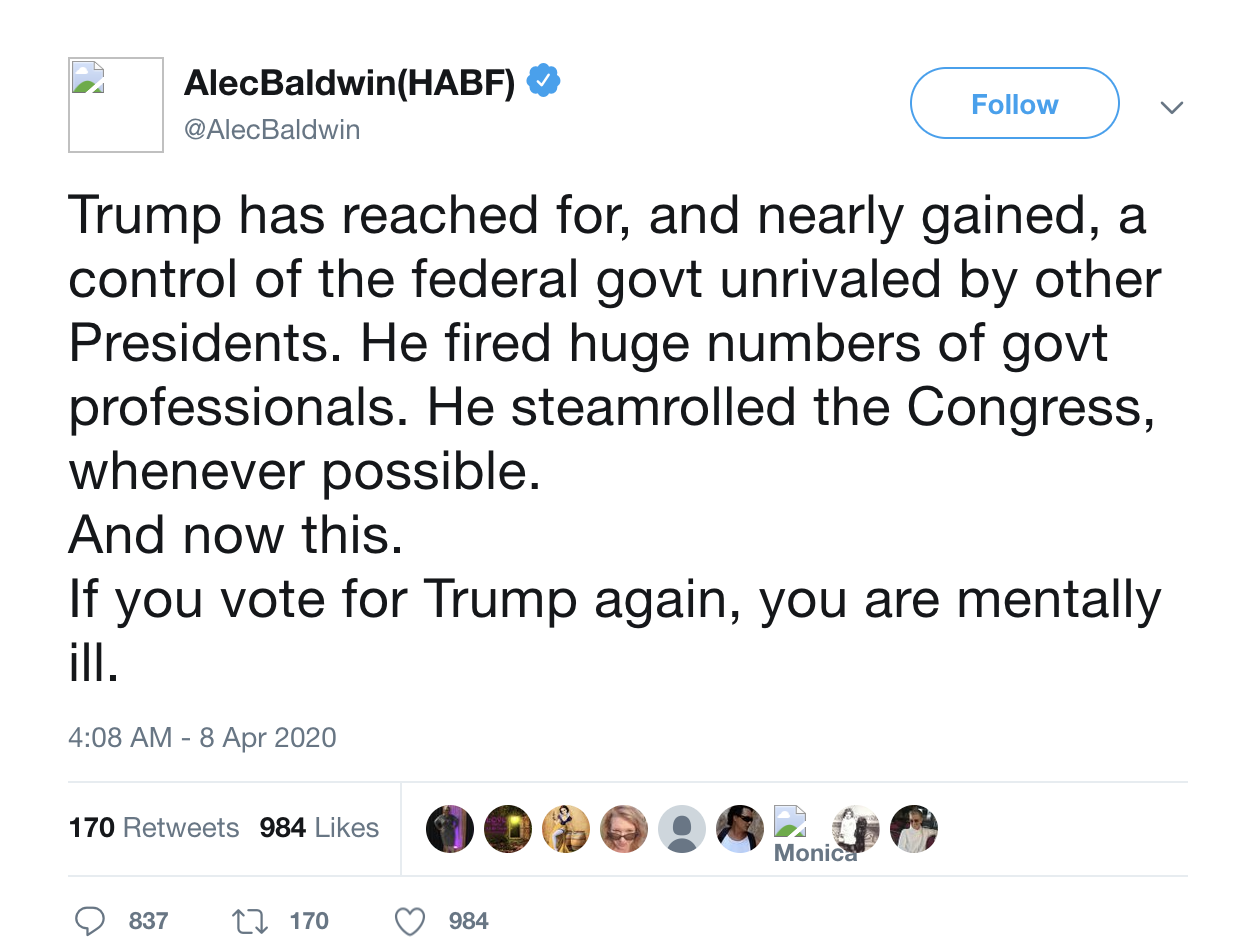 Those comments Alec Baldwin likes to share on social media are quite petty indeed. As a matter of fact, any right-leaning celebrity making comments of that caliber would immediately come under fire and cancelled by the SJW mob.

Unsurprisingly, both of the tweets mentioned above have since been deleted by the actor.

Again, it is pretty rich of him to speak out against cancel culture now that his wife is being targeted by the same people he’s been constantly enabling on social media. So Baldwin is right when he says that cancel culture is fire in constant need of fuel.

As it was to be expected, Baldwin’s tweet wasn’t very well received by the cancel culture mob. From those who keep trying to rename this shameful practice to “consequence culture” to those who call out the actor’s hypocrisy.

“It should be called ‘consequence culture,'” lectures one Twitter user, adding that, “bc no longer acceptable to do/say what u want and not be accountable!”

They continued, “No matter color, we are human and some need to be reminded!”

Further explaining the morality of this “consequence culture” they support, the user explains that “They hv displaed bad behavior so long they think there shouldn’t be consequences! Too bad!”

“Hilaria made her Spanish bed. She now has to sleep on it,” expressed another user, alluding to the controversy involving the actor’s wife.

User @davidmoorhead calls out the actor’s hypocrisy stating, “I mean, when you’re in the middle of a decade-long grift and FINALLY get exposed, I’d say that EEEEEEEElaria got a huge pass all things considered,” further adding, “How do you say ‘divorce’ in Spanish?”

Another user also brings up Hilaria Baldwin’s controversy, stating that “Calling out a liar is not cancel culture.”

“So…after running your yap for years you finally get it,” rightfully asserts Twitter user @Vanz1030, who calls out the actor’s hypocrisy now that someone close to him has been targeted by the cancel culture mob.

“Culture STEALERS should be CANCELED,” reads another comment that supports the cancellation of those who appropriate other cultures.

What do you make of Alec Baldwin’s recent comments condemning cancel culture? Let us know in the comments section down below or on social media.