A new rumor claims that Disney is developing a Black Panther spinoff series for Disney Plus starring Danai Gurira’s Okoye.

Okoye is the General of the Dora Milaje and the head of Wakandan armed forces in Black Panther. After Erik Killmonger defeats T’Challa, she serves Killmonger.

However, when T’Challa returns, she sides with him in a civil war over control of Wakanda. 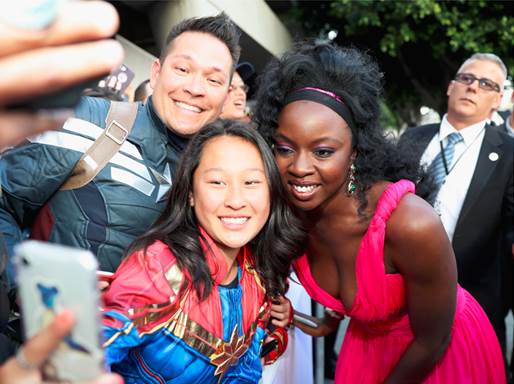 She would go on to lead the Wakandan forces alongside T’Challa against Thanos’ forces in both Avengers: Infinity War and Avengers: Endgame. In Avengers: Endgame, she became one of the leaders of the Avengers reporting to Black Widow.

The rumor comes from The Hollywood Reporter as part of their countdown of the top lawyers in Hollywood.

Underneath their entry for Jamie Mandelbaum they detail that he “brokered a deal for actress Danai Gurira to reprise her role as Okoye in the upcoming Black Panther sequel but also in an origin spinoff series for Disney+.”

They did not provide any other details.

However, Deadline, which is owned by Penske Media, who also happens to own The Hollywood Reporter published their own rumor story and claimed the Okoye show will be an origin story.

Deadline’s Anthony D’Alessandro wrote, “We hear from sources that Danai Gurira will be returning as Okoye, general of the Dora Milaje, in Ryan Coogler’s upcoming Black Panther: Wakanda Forever as well as reprising the character in an origin spinoff series for Disney+.”

While D’Alessandro cites sources, he also notes at the bottom of the article that the scoop was originally published by The Hollywood Reporter in their top lawyers of Hollywood feature.

Black Panther and Black Panther: Wakanda Forever director Ryan Coogler signed a five year deal with Disney that was announced back in February.

Disney’s Executive Chairman Bob Iger confirmed the deal stating, “Ryan Coogler is a singular storyteller whose vision and range have made him one of the standout filmmakers of his generation.”

He added, “With Black Panther, Ryan brought a groundbreaking story and iconic characters to life in a real, meaningful and memorable way, creating a watershed cultural moment. We’re thrilled to strengthen our relationship and look forward to telling more great stories with Ryan and his team.”

Coogler also stated, “It’s an honor to be partnering with The Walt Disney Company. Working with them on Black Panther was a dream come true. As avid consumers of television, we couldn’t be happier to be launching our television business with Bob Iger, Dana Walden and all the amazing studios under the Disney umbrella.”

He continued, “We look forward to learning, growing, and building a relationship with audiences all over the world through the Disney platforms. We are especially excited that we will be taking our first leap with Kevin Feige, Louis D’Esposito, Victoria Alonso and their partners at Marvel Studios where we will be working closely with them on select MCU shows for Disney+. We’re already in the mix on some projects that we can’t wait to share.”

Deadline claimed that as part of that deal he was developing “a drama based in the Kingdom of Wakanda for Disney+.”

What do you make of this new rumor? Are you interested in seeing an Okoye origin story?