A live-action prequel to 101 Dalmatians, Cruella revolves around the early life of Cruella De Vil (played by Emma Stone) and aims to provide a sympathetic origin story for the fashionista villain.

Directed by Craig Gillespie (I, Tonya, Lars and the Real Girl) and is written by Dana Fox, Tony McNamara (The Favourite), and Aline Brosh McKenna (The Devil Wears Prada), the crime comedy-drama film opens with Estella (Cruella’s original name) being born before turning to show her having difficulty fitting in at school, getting into constant fights, lacking many friends, and having issues with being told what to do. 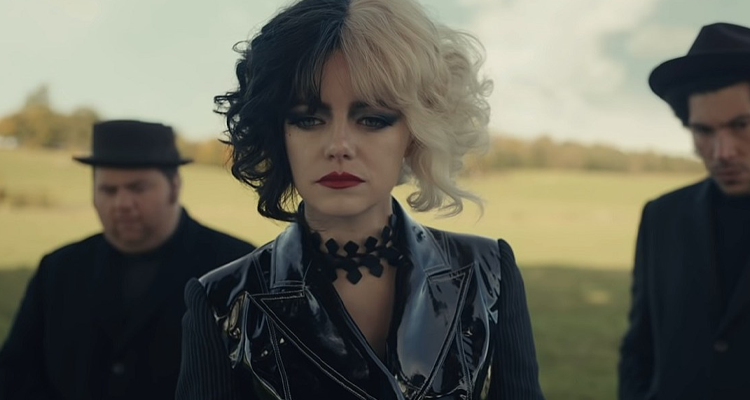 Withdrawn from school in light of her rebellious attitude, Cruella is on the verge of moving to London when her mother is suddenly killed by a trio of Dalmatians in what the young girl is led to believe is a freak accident.

Left alone, Estella then spends the next decade with a couple of grifters and thieves named Jasper (Joel Fry) and Horace (Paul Walter Hauser), as well as her dog Buddy and Horace’s dog Wink.

It’s worth nothing that Cruella is written by one of the writers of The Devil Wears Prada, as the majority of Cruella feels like a storyline lifted directly from the Meryl Streep-led film, with a ‘fashion war’ between the revered  clothing icon The Baroness (Emma Thompson) and Estella’s conjured up extreme personality, Cruella, even serving as the key conflict of the film.

Though Cruella is dripping with impeccable style and absolutely marvelous costume design, especially when it comes to the main character’s wardrobe, these elements alone are not enough to justify Disney’s production of the film.

Ultimately, this origin film about one of Disney’s most recognized villains sucks all of the evil and sinister aspects out of the character, instead presenting a diluted version of Cruella who feels more equivalent to Bart Simpson or Professor Chaos than the selfish woman hellbent on skinning a littler of puppies for a coat seen in her original debut. 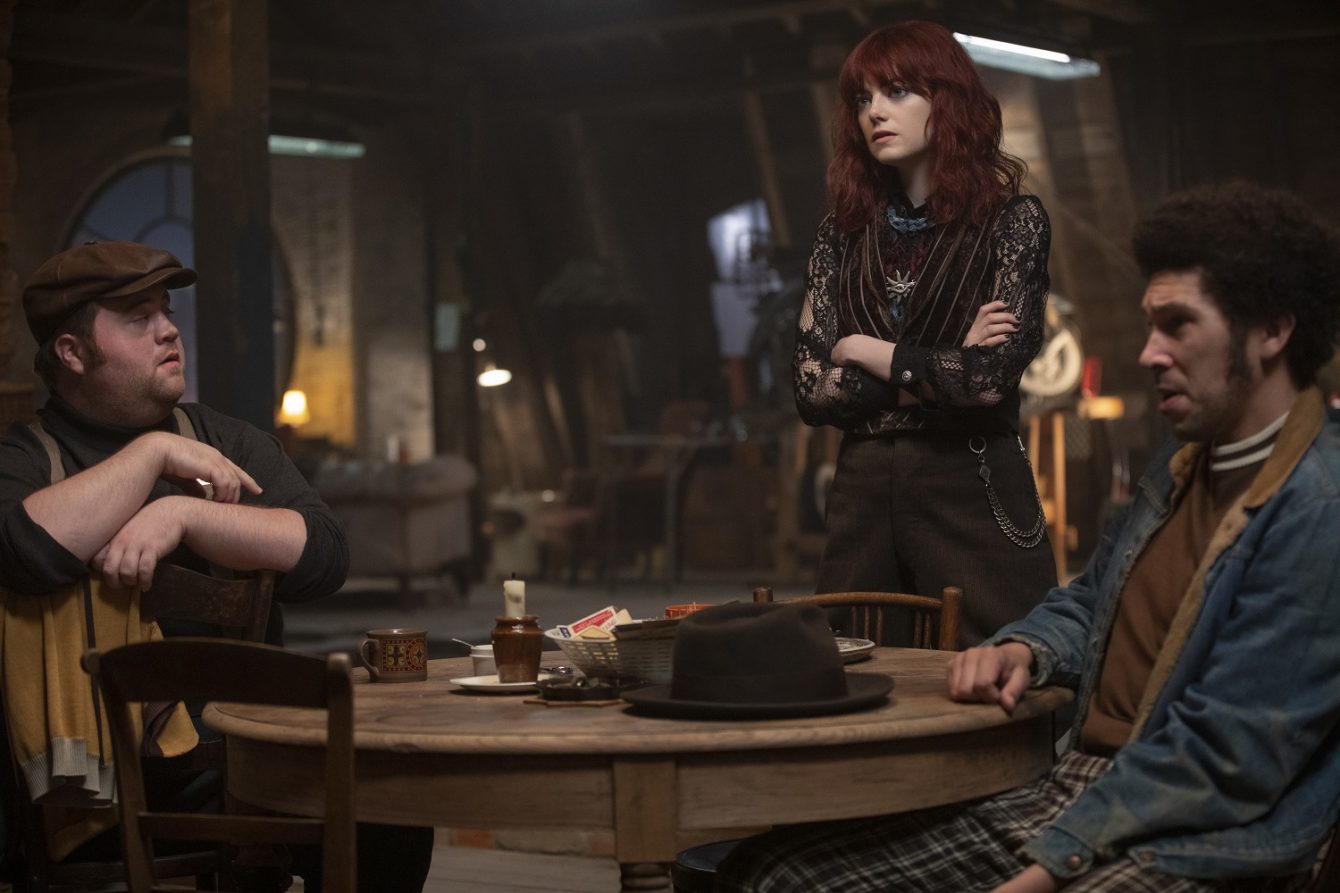 Source: Cruella (2021), Walt Disney Studios Motion PicturesIt could be argued that the character is still young here and that it may take a few films for Cruella to become more sinister, but Cruella feels like a perfect example of all style and no substance, a quality no better displayed than in the film’s odd use of CG to portray its on-screen dogs.

It makes sense on paper, since a CG animal can show more emotion and achieve performances that even heavily trained real-life animals  might not be able to pull off, but the film replaces real dogs with digital versions that do nothing more than lay on the floor, wag their tails, and walk down the street.

The issue is that the digital effects in the film are passable and realistic, but are just off enough for your brain to notice that they don’t look right. 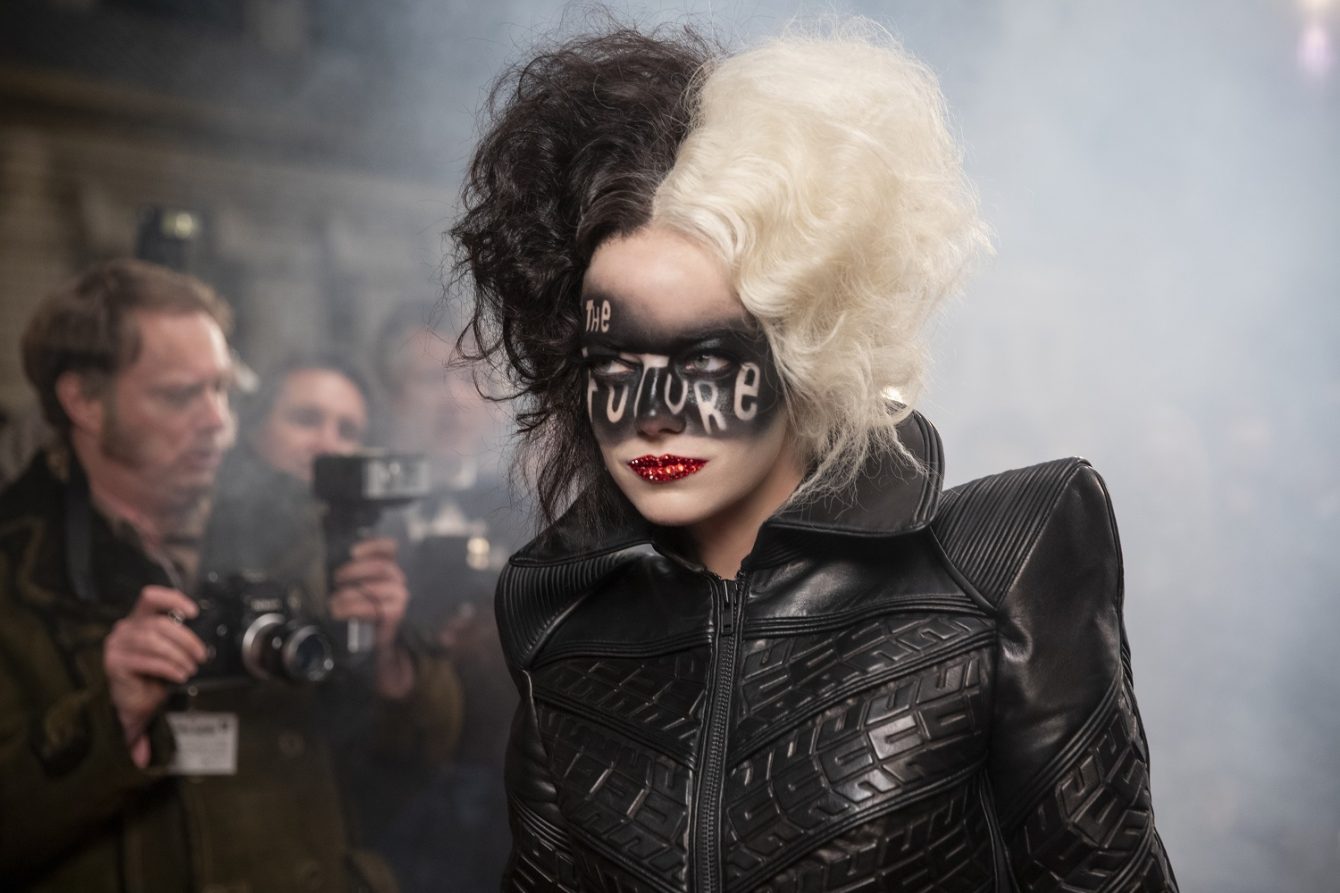 The film waters down the Cruella character even as she begins to show shades of her villainous self.

Featuring a storyline built around the concept of power – having it, obtaining it, and yearning after it – the film sees Cruella begin the pursuit of her dream of being a fashion designer by making costumes for cons to use in their swindling schemes.

But as Cruella, she begins to realize that caring about anyone other than herself is a weakness. It’s an aspect whose embrasement is only teased before she backtracks and openly admits that she needs others in order to succeed.

Cruella attempts to turn this terrifying villain into an awkward, slightly troublesome anti-hero. Yet, she’s shown to be selfish, only slightly caring about other people, which makes it hard to really root for anyone to ‘win’ throughout the story. 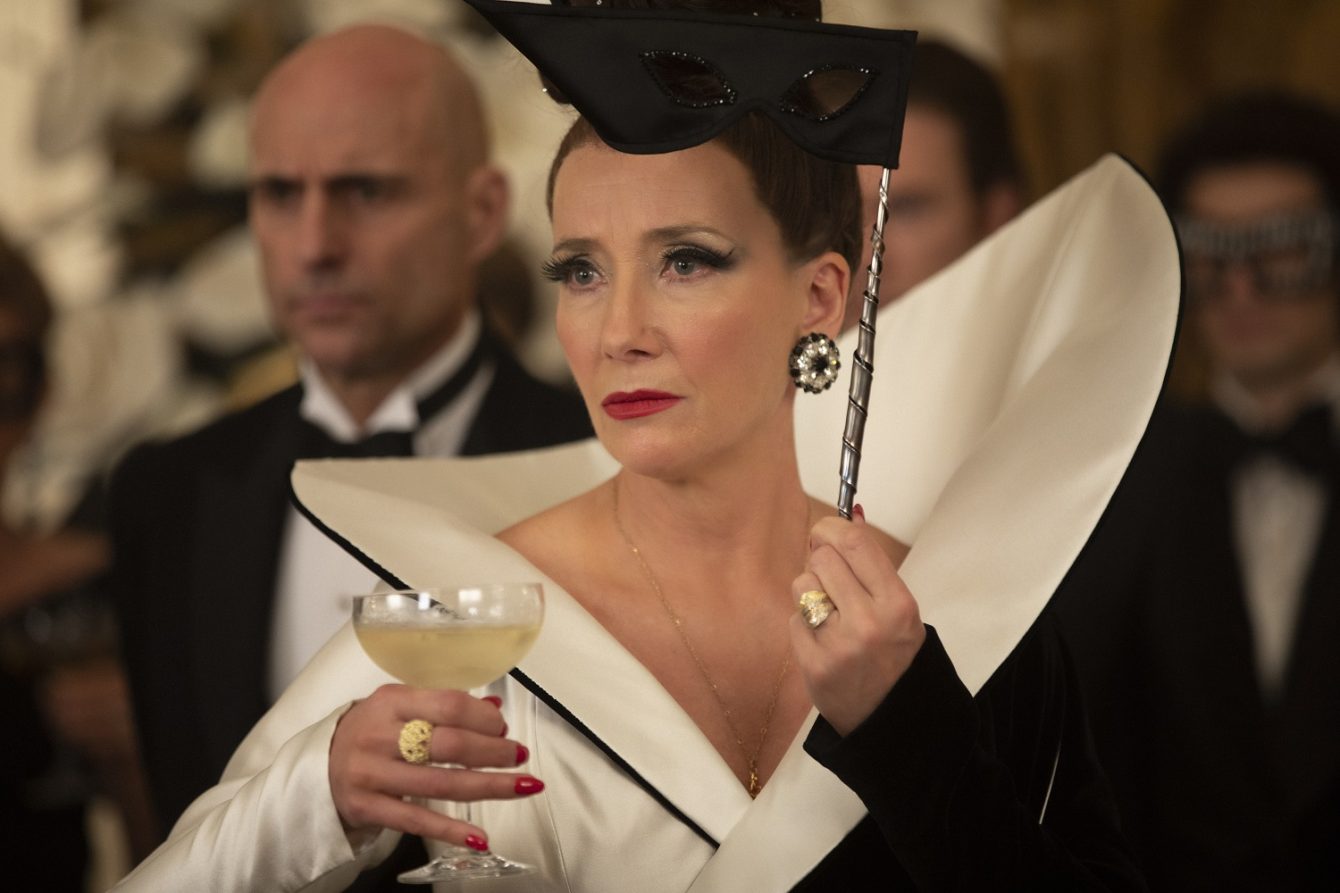 However, the performances in the film are what make Cruella entertaining, being so entertaining that they almost distract you from the film’s shortcomings. Nearly everyone in the film is so delightfully snooty and obnoxiously uptight that it’s humorous.

Emma Thompson’s Baroness is nasty and full of herself in a mesmerizing kind of way, boasting a remorseless attitude that is way more Cruella in nature than anything displayed by Cruella herself.

Joel Fry and Paul Walter Hauser, who play Jasper and Horace, respectively have the best on-screen chemistry of any pair throughout the film. Meanwhile, Emma Stone carries the film and is at her best when she’s in full-on Cruella mode (which isn’t nearly as often as it should be). 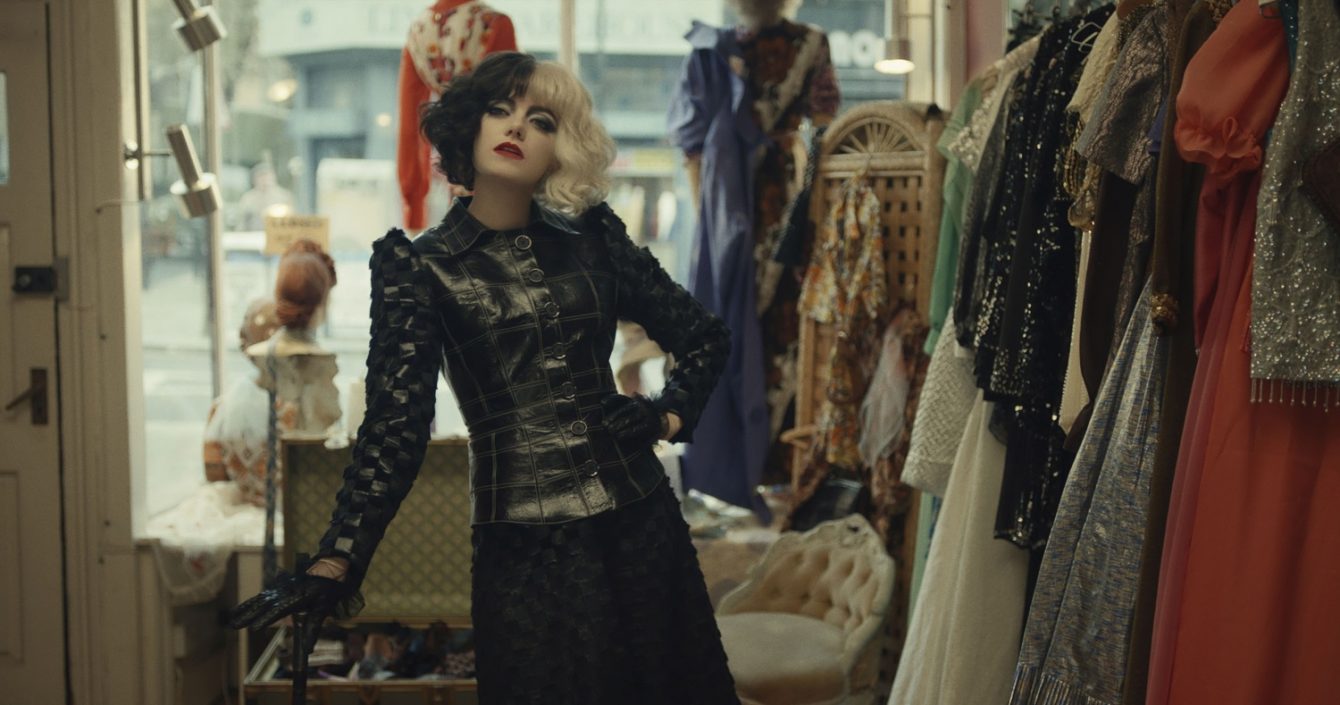 Cruella contains some entertaining performances, but its storyline structure is bizarre to a distracting extent. The film’s decision to portray CG dogs over real ones is also unusual in its execution and doesn’t help matters, while its 134-minute runtime is exhausting in a way that no amount of dressmaking face-offs, jail breaks, or heated arguments over tea and cookies could make up for.

This is essentially a superhero origin story slightly reformatted to feature tantrum-like pranks that are devious to the most menial extent rather than a hero’s journey. Cruella’s secret identity is Estella, and her working with the Baroness is comparable to Peter Parker being Spider-Man and working at The Daily Bugle or Clark Kent being Superman and working at The Daily Planet. 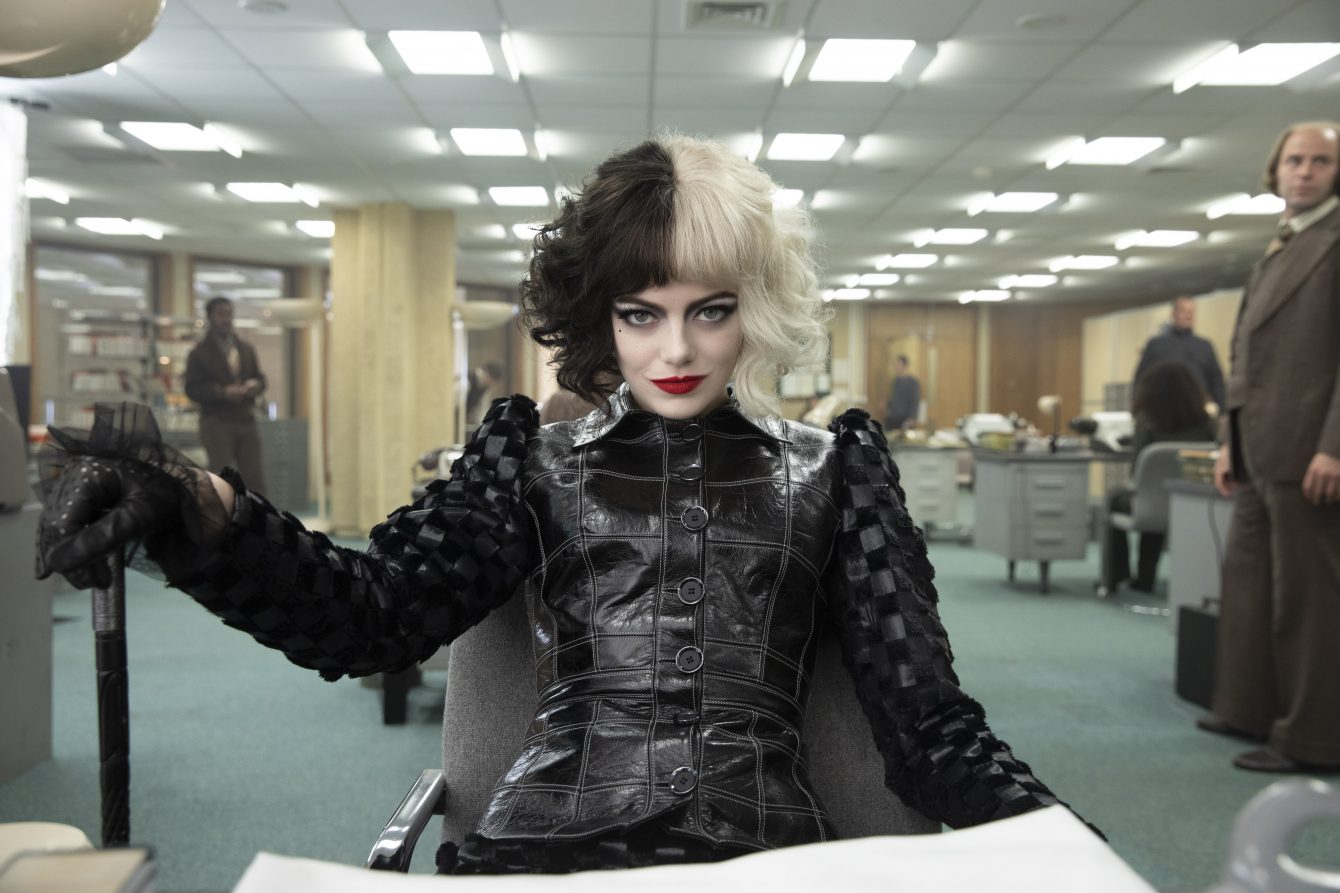 Ultimately, if you’re going to make a movie about the origins of a villain, especially if it’s one that was created 65 years ago and has appeared in two other live-action films, two animated films, and an animated series, don’t make them a hero. That’s exactly what they did with The Scorpion King after The Mummy Returns, and look how that film turned out.

With its sloppy storytelling and overall decimation of a beloved antagonist’s definable maliciousness, Cruella is a shaggy, unkempt dog of a film that is a victim of its own fashion.