An Anime Matsuri staff member has adamantly refuted the recent rumor that former Japanese adult video actress Kaho Shibuya, first circulated in an email blast sent to Anime Matsuri attendees, that she planned to host an afterhours “anime sex party” as part of the convention’s programming. 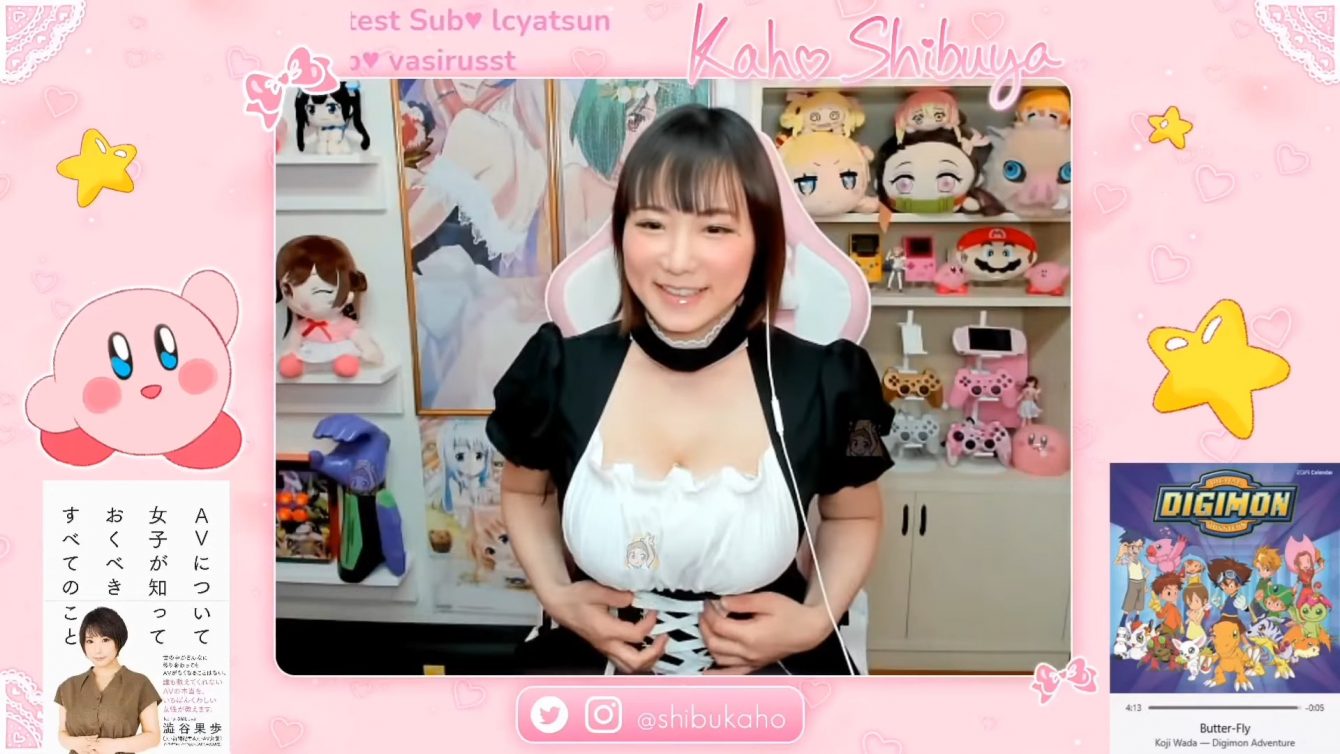 Sent to attendees on July 7th from a Gmail account purportedly belonging to an individual named Fuke Yuri (though this is likely a ‘fake’ identity, given that the name itself appears to be a play on the phrase ‘f–k you’) and claiming to have been authored by Shibuya herself, the email blast in question announced that the former JAV star would be holding an “anime sex party at 1 am July 13th in Shibuya Crossing Stage for guests and artists where I will give out the best AV experiences for you guys in costumes.”

“This will be decided through a raffle which is available for everyone to participate,” the post concluded. “Anyone [who] wants to join the raffle can send the email with name and booth position to [Anime Matsuri Projects & International Relations lead Jacob Takanashi].”

This bizarre message was brought to further widespread attention on social media when Takanashi himself shared a screenshot of the email to his personal Twitter account and stated that the entirety of its contents were “totally fake.”

“This is hilarious. If you get this email, (I think it goes without saying but) it’s totally fake,” wrote Takanashi. “It’s insane the lengths some groups go to. Lmao.”

Takanashi then further clarified that “Any communication from me about the convention to my guests will come from an ‘(at)http://animematsuri.com’ email address. Not some random Gmail account. Obviously.” 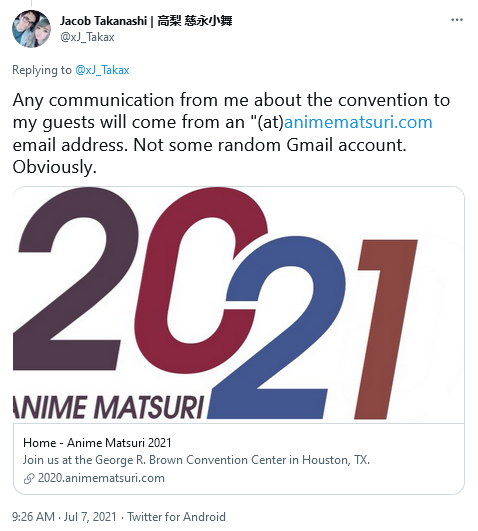 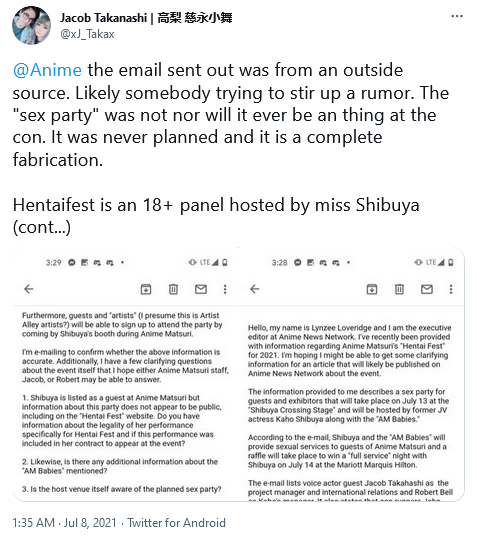 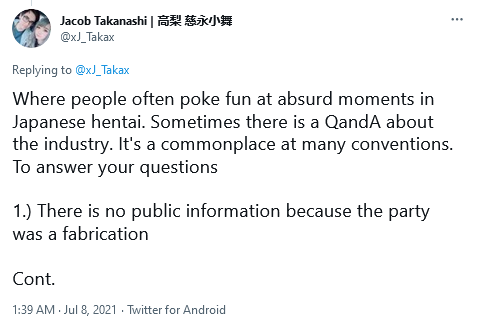 He continued, noting that “There is no public information because the party was a fabrication” and “The AM ‘Babies'( it’s actually babes, whoever fabricated the email must not have done their research) are a dance squad who performs at some of our main events,” before repeating a total of four times in the hopes that the message would be communicated, “The sex party was a fabrication.” 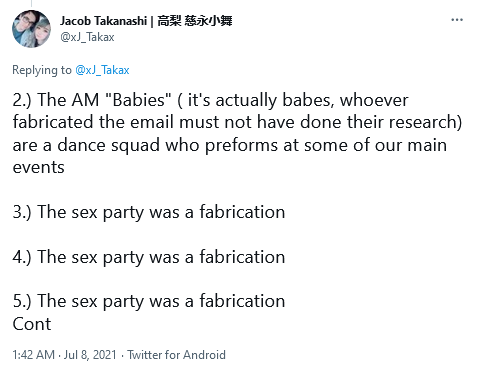 “Also to add, the convention takes place July 8th through the 11th,” wrote Takanashi. “Therefore there will be no “Shibuya crossing” stage on the 13th. As the convention will have ended 2 days earlier.”

In conclusion to his second thread, Takashi added, “It’s should also be known that the likely culprit behind this fabricated email is a gentleman who has been stalking and spreading false rumors about kaho for the past few years” and linked to a thread written by Shibuya herself in which she detailed her experience with being stalked and harassed by an individual by the name of “Le Minh Triet (Alias: Triet Jerry Le Minh).” 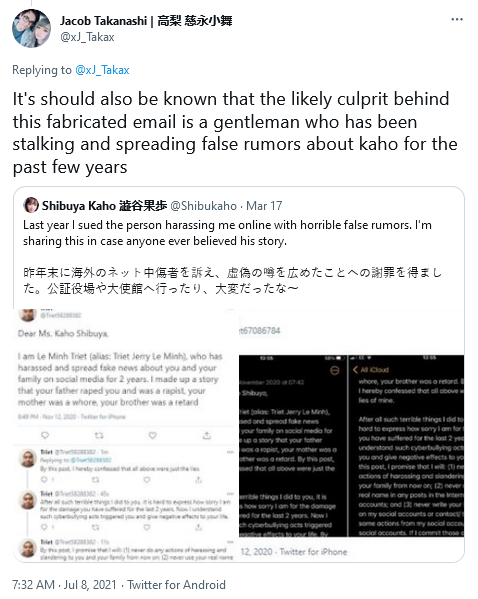 Kaho herself addressed the email on July 8th, writing on her personal Twitter account that “Some are worried about a spam chain email pretending to me in which my manager’s name is stated as this guy,” referring to the aforementioned Triet.

While the actual email lists one “Robert Bell” as Kaho’s manager, it appears that Kaho believes this name is a pseudonym being used by Triet. 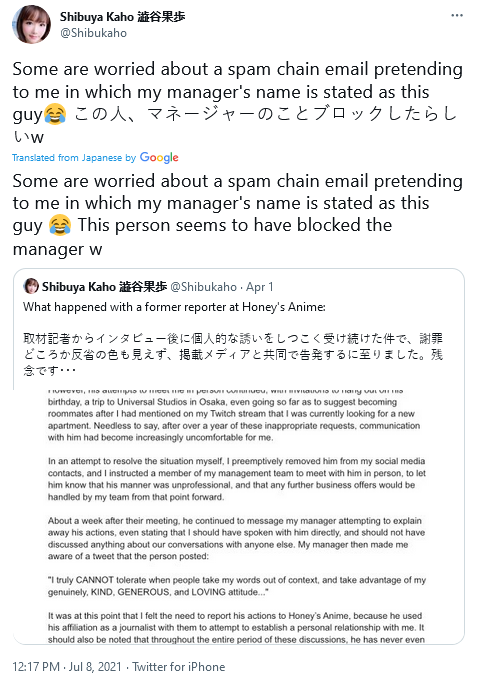 However, despite both Takanashi and Kaho’s public and vocal denial of not only the message’s veracity,  but also the fact that no such event was ever planned for Anime Matsuri, some (particularly those who may have already been keeping ‘tabs’ on the convention due to the invitation and subsequent appearance of former Dragon Ball voice actor Vic Mignogna as a special guest) continued to exhibit skepticism towards his response.

One such skeptic was former Channel Awesome content creator Kaylyn “MarzGurl” Saucedo, who wrote to her personal Twitter account, “Jacob claims it’s fake, but–If–*IF*–it isn’t (& it appears that at LEAST a handful of Anime Matsuri guests received this e-mail, whether real or not), it implicates the AV idol, her managers, the AM chairs, & the host of the car show in soliciting prostitution, a crime in TX”. 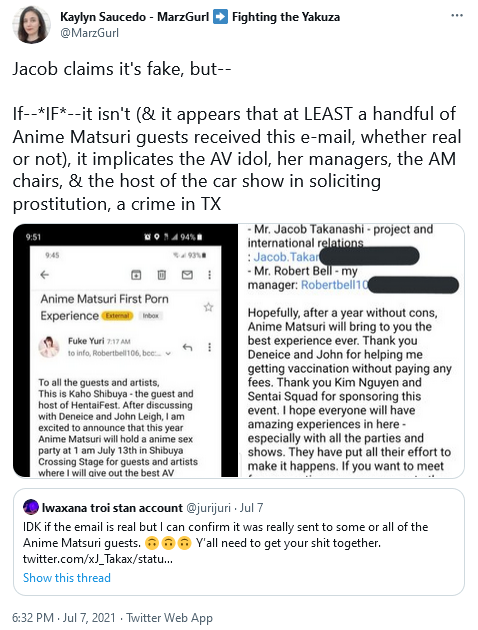 However, hours later Saucedo admitted that she may have been too quick to judgement, writing “So, what’s shitty is, this very likely could have been internal sabotage, since they have a whole list of guests/vendors that this went out to,” though she also attempted to justify her vocal skepticism by blaming the fact that “the con has had SO MANY PROBLEMS for almost 15 years that it’s such an easy thing to believe.” 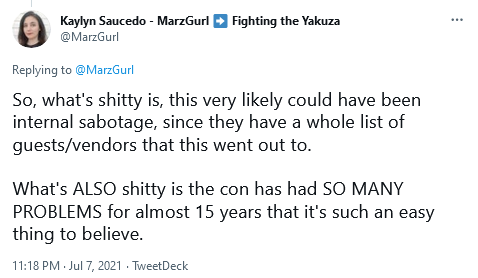 On July 11th, Takanashi reported that yet another “totally fake” email blast, presumably from the same sender was sent out.

In this email it assured recipients that the adult event “is still proceeding” and that Takanshi’s post was made “to placate [negative] public opinion.”

In response to this new email Takanashi informed his followers, “Looks like whoever sent this email is doubling down. This one is totally fake too.”

“If you want to come to the GRB on the 13th to “Shibuya crossing stage’ and verify for yourself if the party is happening you’re more than welcome,” said Takanashi. “It will be a wasted trip, because nobody from the con will be there, because the party does not nor has it ever existed.” 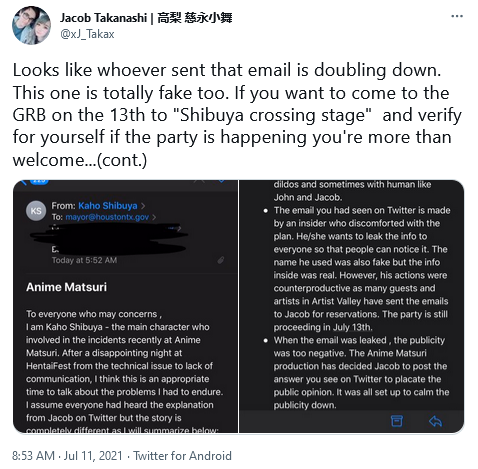 He also took a moment to push back against the harassment he and his wife had been receiving, telling those who had engaged in such behavior, “Also, please stop messaging my wife. She is 9 months pregnant and does not need the stress.”

Though both Takanashi and Kaho believe the culprit behind the emails to be Triet, as of writing, there has been no public confirmation as to the identity of the original sender.

What do you make of the fake email sent to Anime Matsuri attendees? Let us know your thoughts on social media or in the comments down below!