After former Batman and current Rorschach writer Tom King boasted that he swore out a fan over their lack of a face mask in an altercation that subsequently resulted in the fan’s removal from from the recent AwesomeCon, convention staff have reportedly asserted that the event has seen “no incidents.” 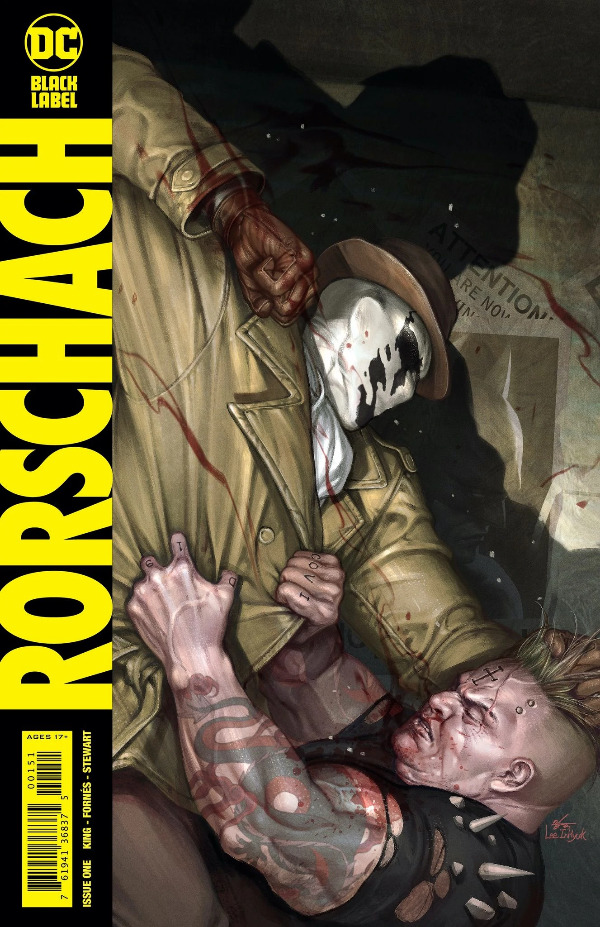 King first boasted of the supposed incident on August 21st, taking to his personal Twitter account to recall, “Love seeing people at cons. But yesterday we had a Rorschach cos player who took his mask off at our table. You think I swear a lot in comics you should see me in person.”

“After an impolite talking to, Rorschach was escorted from the con,” King added. “Wear your mask. We’re not f—ing around.”

On August 22nd, seeing “that seems to be some confusion about a mask thing at a con,” returned to Twitter to elaborate on the specifics of the confrontation.

“Mitch and I were signing at our booth at awesome con which has a strict mask mandate in compliance with Washington DC’s indoor mask mandate,” began King. “Thousands of people there. All wearing masks.” 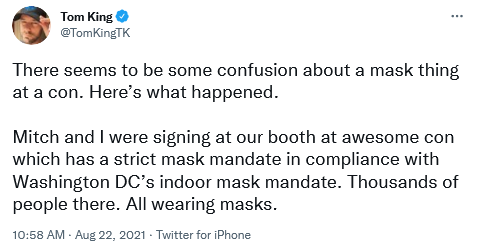 “We spotted a dude in a Rorschach jacket not wearing a mask a few feet from our booth coming our way. We noted this to the kind people helping us with our line at the con. They went over and politely asked the dude to put on a mask. He ignored them and walked up to the booth.” 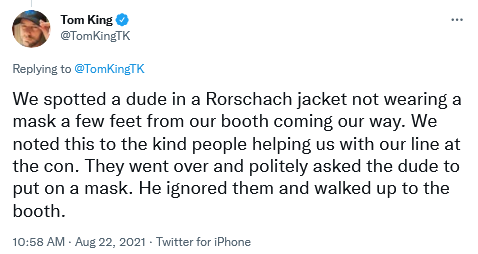 “Cutting the line, dude came up to us. We told him he had to mask before talking to us. He seemed confused by this, like kind of dazed or stunned. But finally he took out a thin Rorschach mask (nylon stocking with ink). But didn’t seem to know how to put it on. It was tangled.” 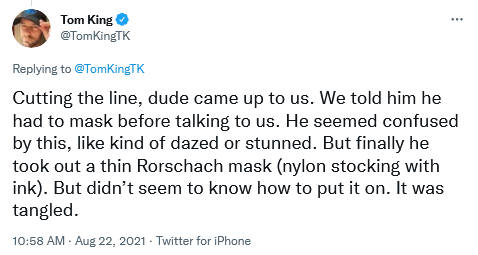 “We asked him to stand back from the booth while he figured out his mask. He didn’t move. We asked him again. Didn’t move. At this point, I sent some language his way, no regrets. He finally woke up a bit. Took a step back and put on his Rorschach nylon sock thing.”

“He handed us two books. We signed them quickly, we didn’t want him in our line with that mask. He walked away a few feet, removed his mask, and went back maskless into the con.”

“We were later informed that the kind people helping us at the con,” King concluded, “as they are obligated to do, reported this behavior to the con management and the dude was removed for violating the con and the District’s policy.”

Interestingly, there are several discrepancies between King’s follow-up explanation and his initial assertion, most notably that the fan not only put on a “Rorschach mask (nylon stocking with ink)” when asked by King, but that he also only removed it after he was already leaving the creative team’s booth.

It also appears as if King was “f—ing around” at least a little bit, as, by his own assertion and despite the fact that the author claimed that the fan had cut the line, he still signed two books for his purported enemy. 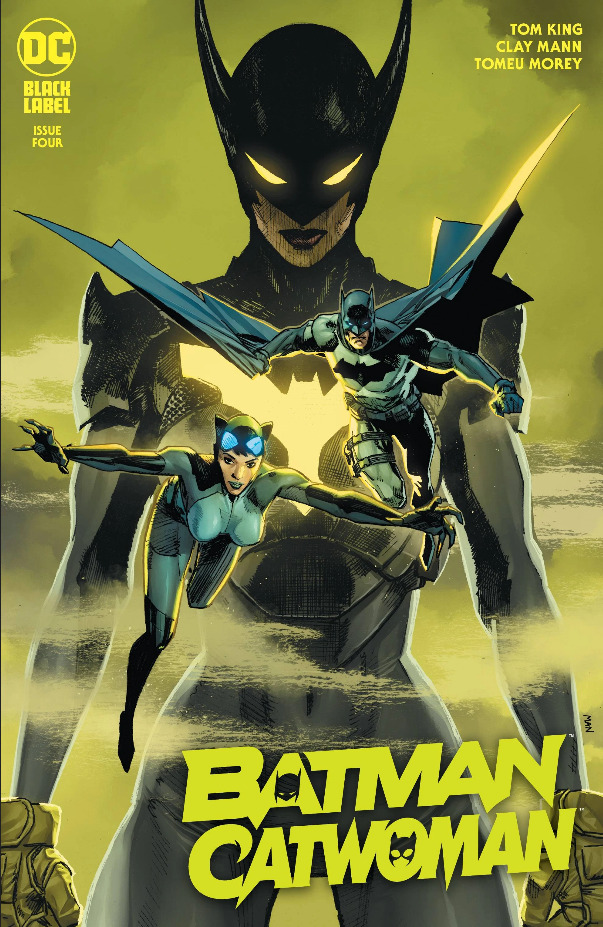 However, King’s story was further turned on its head several hours after he tweeted the above explanation, as according to noted and respectable comic book YouTuber Perch, after reaching out to AwesomeCon directly, organizers informed him that “the con is running smoothly, people are complying with their rules and having a good time.”

“No incidents,” Perch added. “But people should reach out for themselves.” 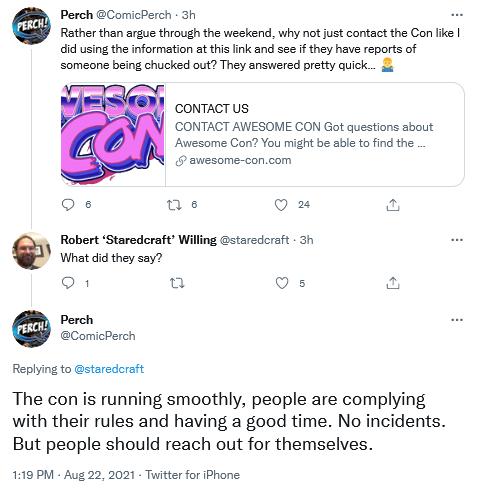 What do you make of King’s alleged AwesomeCon altercation? Let us know your thoughts on social media or in the comments down below!