Former Screen Junkies contributor and YouTuber Dan Murrell posted a lengthy thread to Twitter where he whined about YouTube “grifters.”

Murrell posted to Twitter, “There is a network of grifters who thrive by sticking ‘woke’ (or ‘SJW’ or whatever the new iteration will be) in front of something different each week or two: He-Man, Candyman, What If, Star Wars, whatever. It’s a perpetual outrage machine that’s algorithm friendly.” 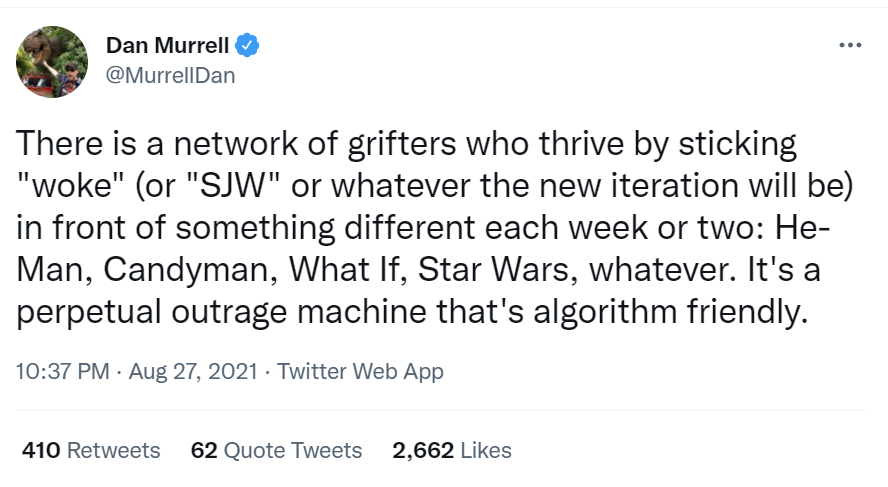 He continued, “These videos are then parroted and become the discourse around whatever the topic of the week is. The people who make these videos only have three or four things to say. But they say them to a rapt audience daily, who then spread that message to every corner of the internet.” 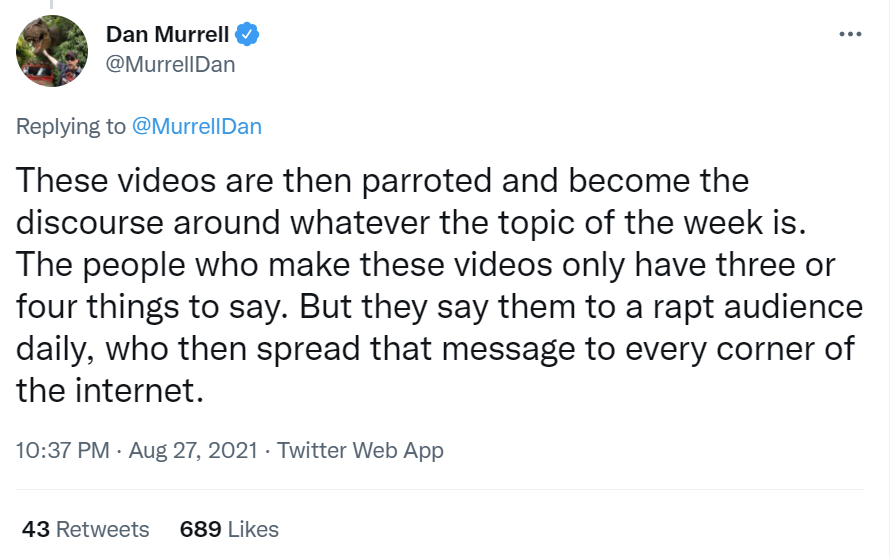 “Meanwhile, it seems like the other voices get drowned out. Nuance isn’t algorithm friendly. The folks whose living depends on peddling this outrage pick the carcass clean. Sometimes Brie Larson says something at an event in 2018 that you can twist and build a channel around,” he went on. 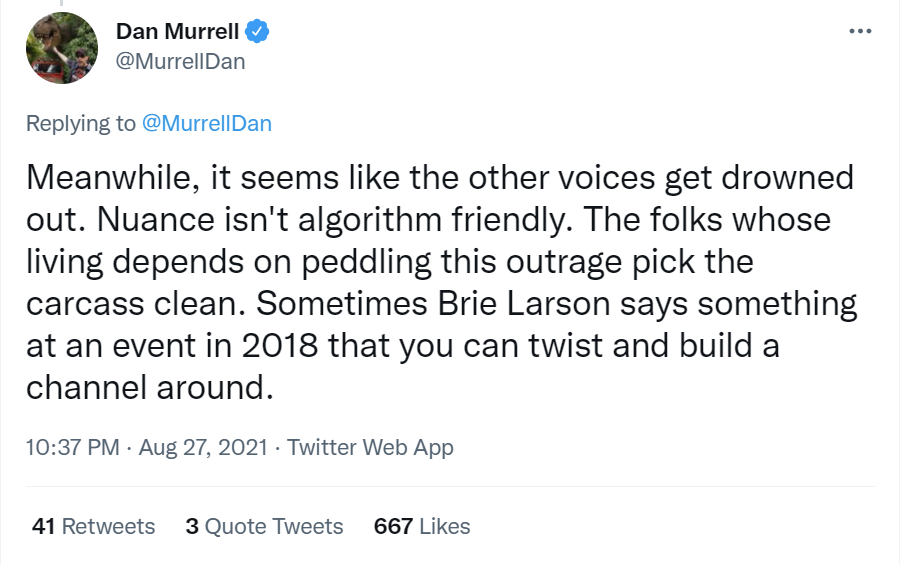 The YouTuber then posited, “Some of this is genuine outrage. A lot of it consists of bad faith distortions, a performative ritual to keep the wheels spinning. They cast themselves as the ‘everyman,’ fighting a straw man war against enemies that don’t exist to attack things they usually haven’t seen.” 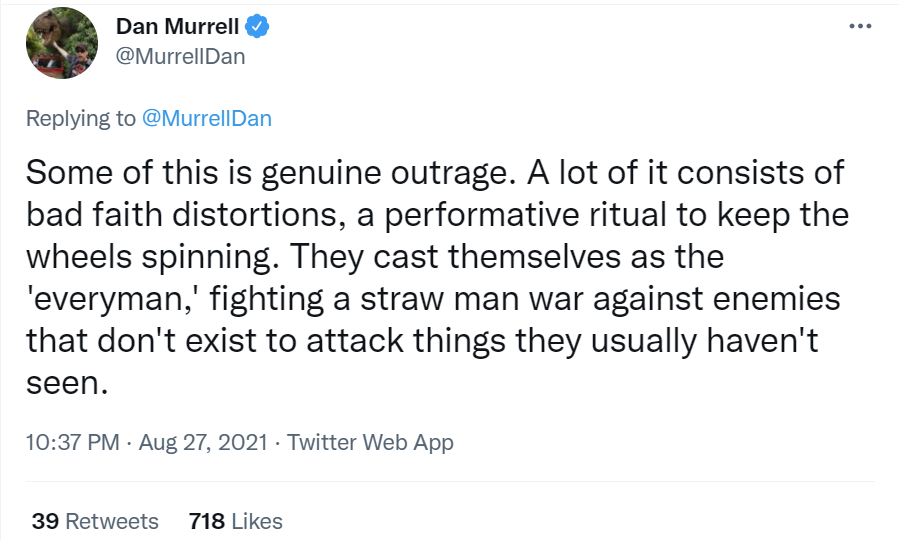 He finally concluded the thread, “But YouTube is a big place. There are people out here who genuinely care about art, film, TV, etc. Seek them out. Let the grifters grift. They’ve found their audience. They will remain successful. But there’s room for everyone, even if it doesn’t always seem like it.” 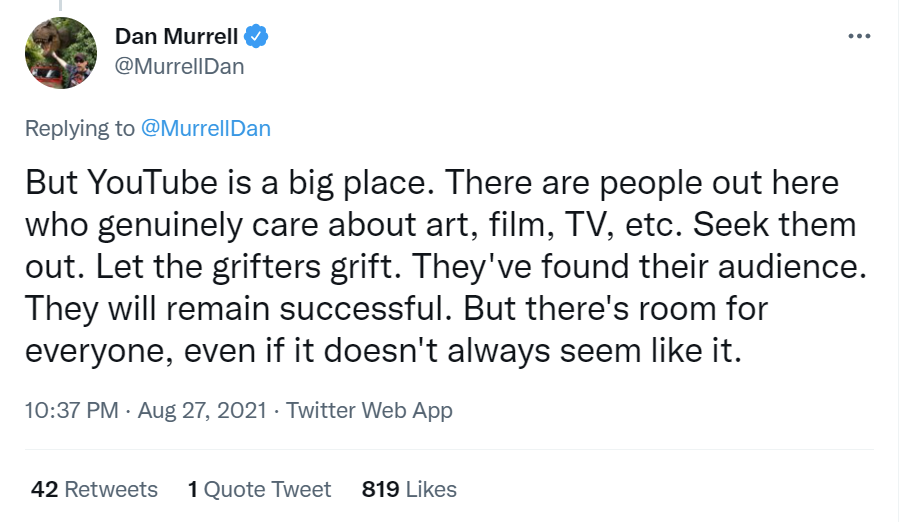 Interestingly, Murrell’s whining about YouTuber “grifters” has a ton of contradictory points. He begins by condemning these “grifters” for critiquing various different media properties for being woke whether it be He-Man, Candyman, Star Wars, or What If implying that the critiques are not valid.

However, just three tweets later, he’s stating “some of this is genuine outrage.”

In fact, Murrell seems to be doing quite well for himself on YouTube. He started his channel in March 2020. He already has over 97,000 subscribers and over 8.5 million videos according to Social Blade.

Social Blade even notes his channel is now ranked in the top 50,000 YouTube channels in the United States. His voice is clearly not being drowned out.

As for his claims about people twisting Brie Larson’s words from an event in 2018, it’s unclear who he is talking about.

But Brie Larson clearly stated at the Film Crystal + Lucy Awards in Los Angeles in June 2018, “I don’t need a 40-year-old white dude to tell me what didn’t work about A Wrinkle in Time. It wasn’t made for him! I want to know what the film meant to women of color, to biracial women, to teen women of color, to teens that are biracial.”

She added, “And for the third time, I don’t hate white dudes. These are just facts, these are not my feelings.”

Is Murrell insinuating that Larson didn’t say that? Who knows because as much as he talks about nuance, he tweets in sweeping generalizations.

And he doesn’t just do it about Larson. After claiming “some this is genuine outrage,” he goes on to tweet, “A lot of it consists of bad faith distortions, a performative ritual to keep the wheels spinning.”

Does he provide any examples to actually justify this opinion or claim? No. It’s just a sweeping generalization he decided to type into Twitter. 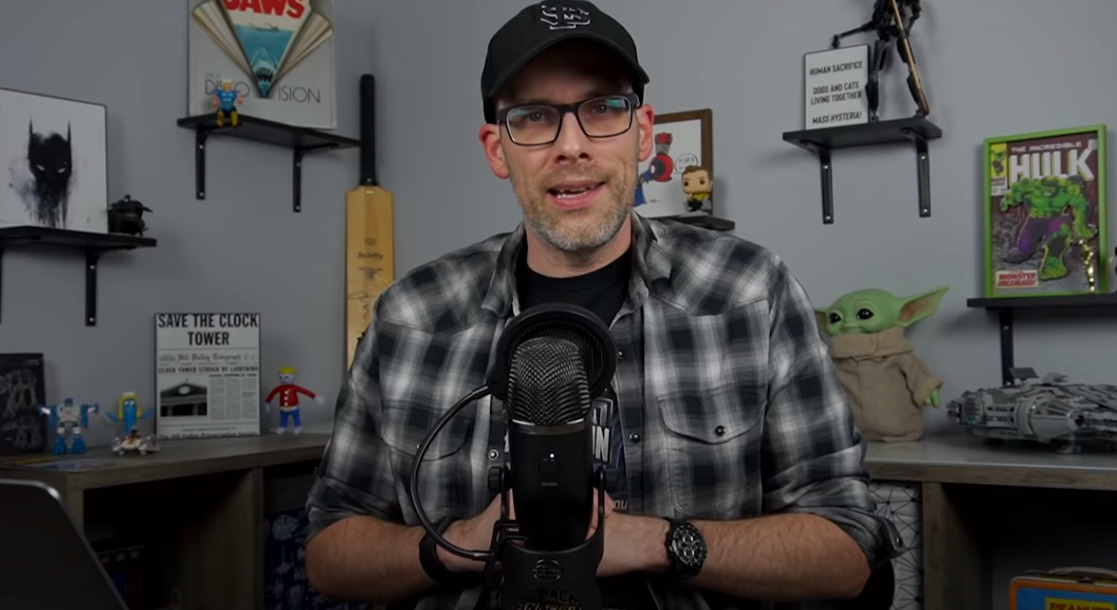 Maybe the most hilarious part of Murrell’s entire thread is that a good number of the replies to him are people who “have three or four things to say…who then spread that message to every corner of the internet.”

Turtz911 tweets, “The biggest trick those people have pulled off in these last couple of years is making diversity and being social aware seem like a bad thing. It gives them an easy thing to say is bad when the content is actually good or decent. Being ‘Woke’ or SJW aren’t bad things.” 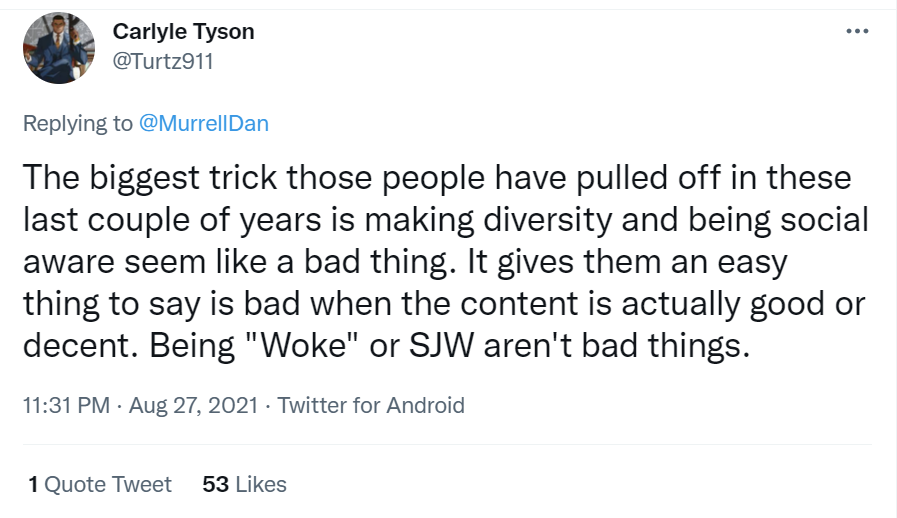 Best of Battlecam writer Dani Fernandez tweeted, “Them: WOKE X-men Us: have you read the origin- Them: I said WOKE X-MEN GODDAMIT”

South_Lake_Taco tweeted, “I google ‘Shang-Chi Disney +’ to see if it would be streaming too next week and was bombarded with a gross article/video about ‘Marvel’s woke phase has failed’ or some garbage like that right at the top of my search.” 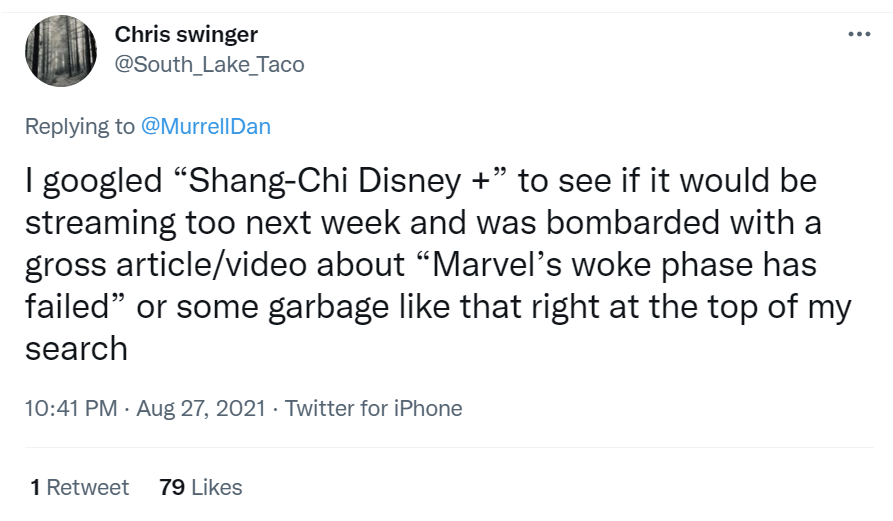 SamPoppsArt added, “It’s gotten to the point where I search up some comic related thing on YouTube and it’s a gamble if the channel talking about it is either sane, or loaded with bigotry and other toxic dude bro bulls***.” 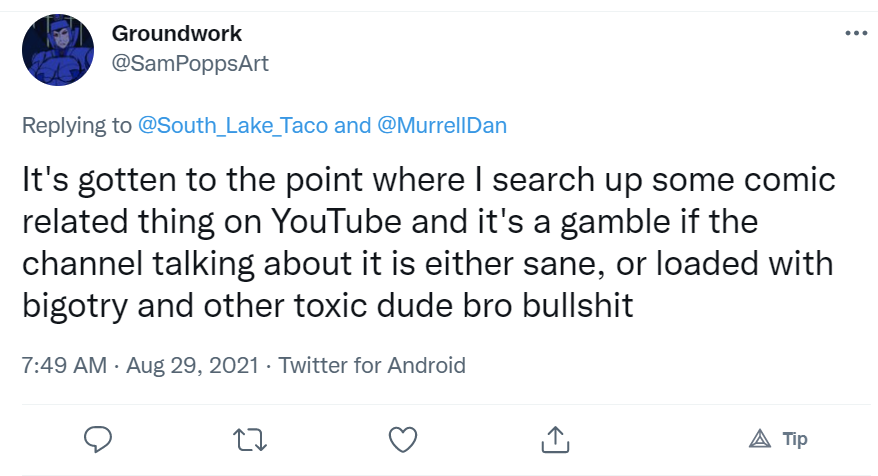 Matthewheywoo18 tweeted, “It’s become a money making thing for [email protected] of those channels and why I stopped watching some that started to go that route. It began with ghostbusters 2016 and has just exploded since and it’s a shame.”

What do you make of Dan Murrell’s complaints about YouTube “grifters?”