“Any organization that can’t say ‘pregnant woman’ is a [clown] show and can never be trusted to bring actual news,” wrote the actor on Wednesday, sharing a link to the article in question. 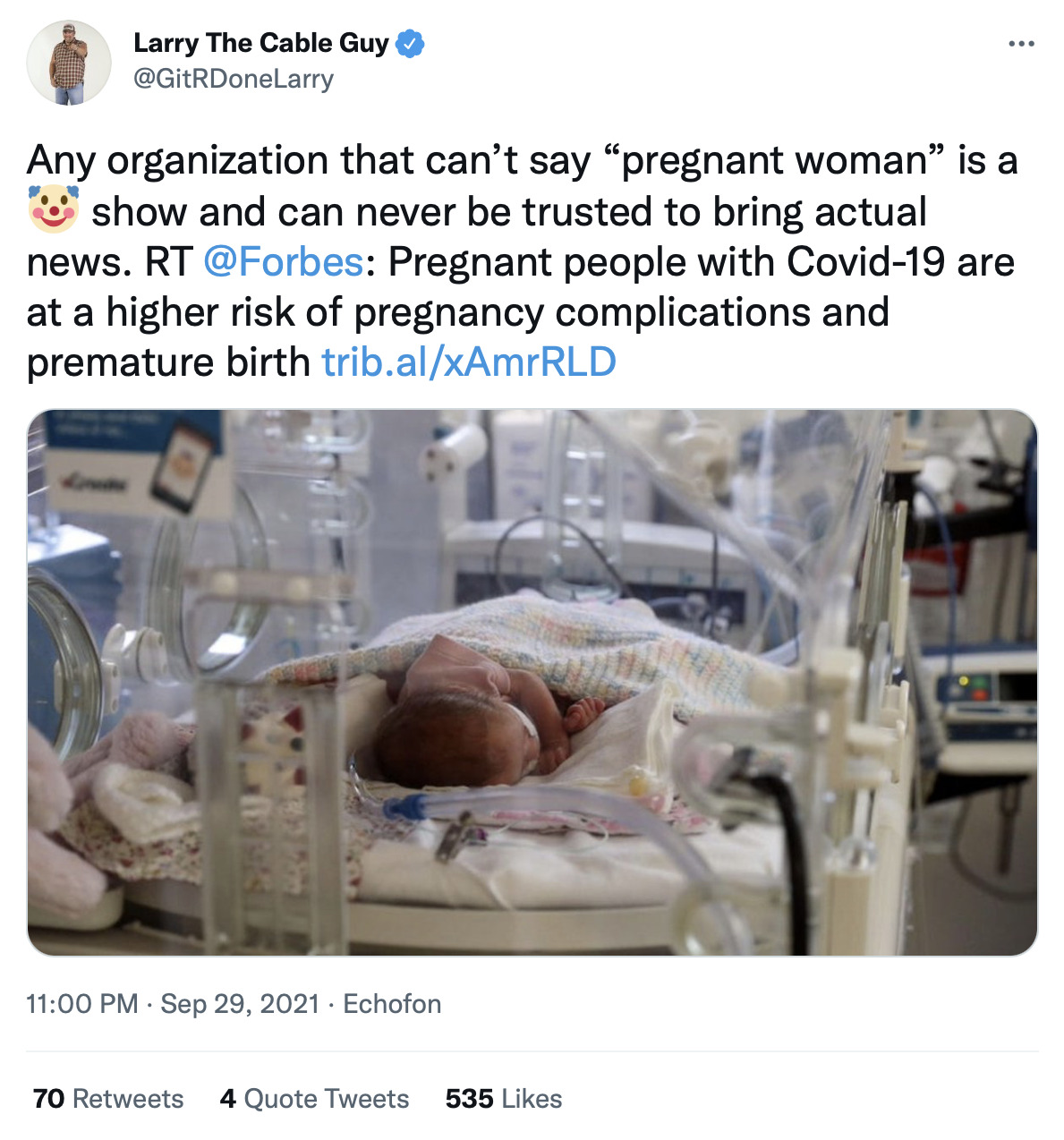 Titled “Pregnant People With Covid-19 At Higher Risk Of Pregnancy Complications And Premature Birth” and written for Forbes by staff writer Kimberlee Speakman, the article makes constant use of the woke term while sharing information shared from the Centers for Disease Control and Prevention (CDC) regarding COVID-19 and the effects it has on pregnant women.

Interestingly, albeit fairly unsurprising, it is the statement officially issued by the CDC that repeatedly chooses to refer to pregnant women as “pregnant people,” with one such segment within the report even reading, “The highest number of COVID-19-related deaths in pregnant people (n=22) in a single month of the pandemic was reported in August 2021.”

The comment section under Larry the Cable Guy’s tweet was soon joined by others who shared the comedian’s sentiment, with many similarly pointing out the ridiculousness of both the media outlet and the health organisation’s wording of their respective articles.

Larry the Cable Guy exasperatedly replied to the user, “Evidently it’s being called ‘science,'” and added the almost-mandatory facepalm emoticon.

User Chris Chinni made a compelling point by asking, “So, when we see one of our buddies with that big ol beer gut and we’re trash talking, can we still say hey Bubba, you like like a pregnant woman that’s 11 months pregnant. Or do we have to say hey Bubba, you look like a birthing person that’s been carrying a fetus for 11 months?” 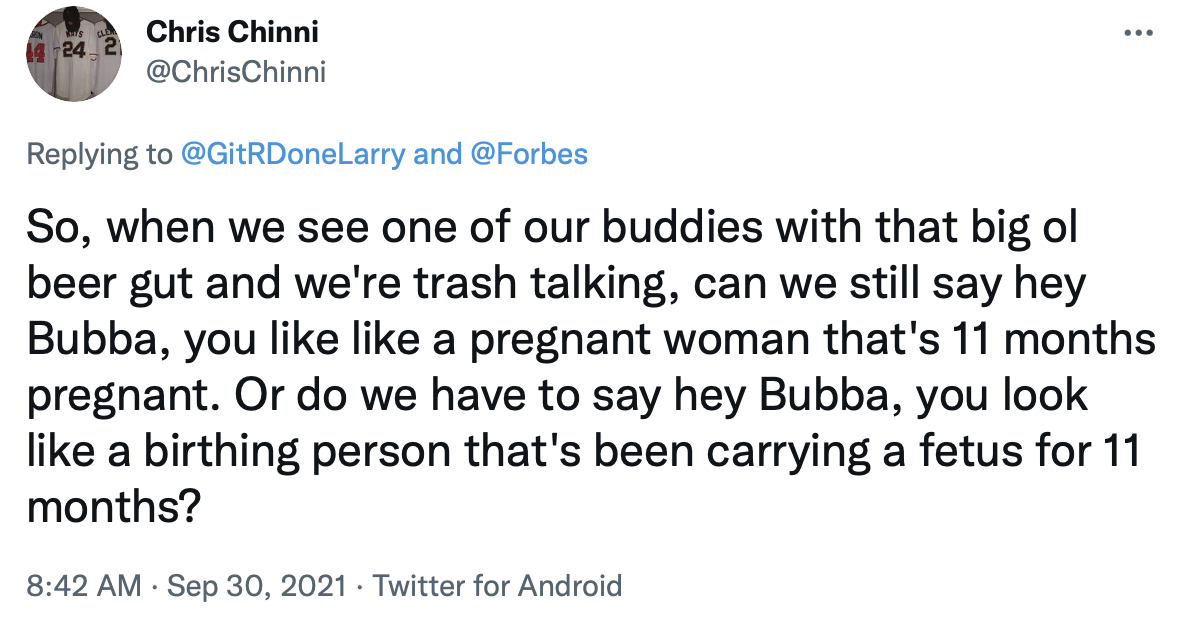 @Michaelbj61 also chimed in and suggested that “this is what happens when liberal women and beta males listen to mentally ill people and leftists lunatics.”

He added, “Crazy people are now dictating to normal people what is and isn’t reality. It is quite comical that someone hasn’t said hey wait a minute lol”

“I’ve always felt bad when somebody asks a women if she’s pregnant when she isn’t, now that the terms ‘pregnant people'” said @52movies. “I don’t know what I’m going to do if as a man it happens to me. I’ll tell what I sure ain’t gonna do and that us cut back on donuts cause they’s to yummy” 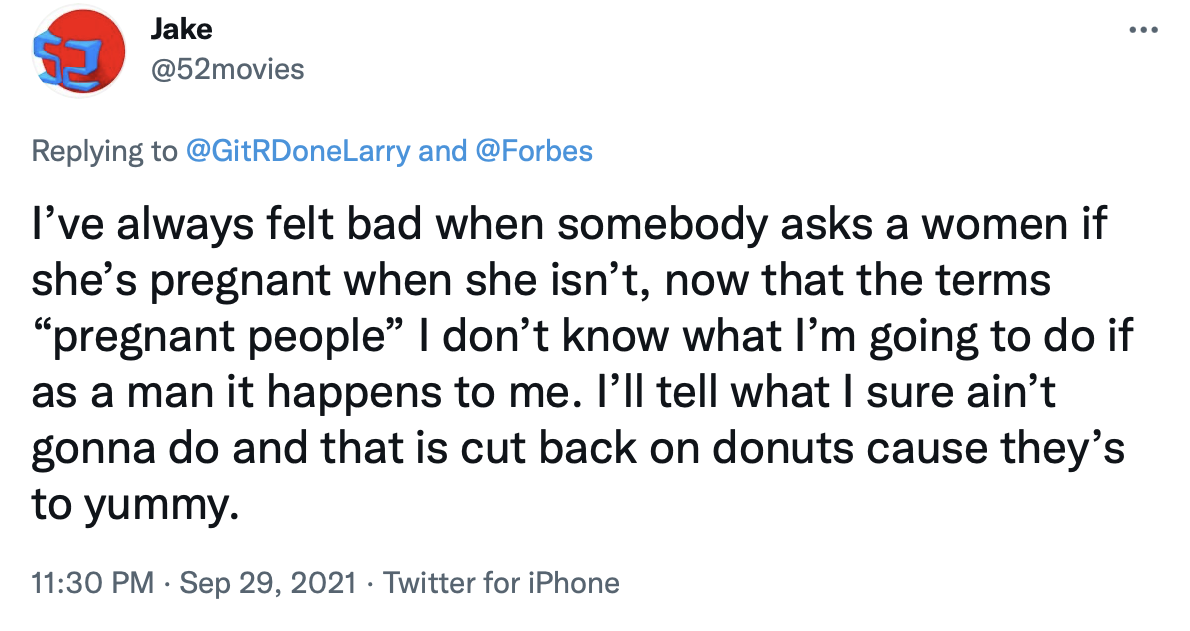 @jbstevens simply wondered, “What if I identify as pregnant, and it is only my beer gut?”

However, not everybody was supportive of Larry the Cable Guy’s criticism of the CDC and Forbes, as there were a couple of users that not only disagreed with the comedian’s complaint, but also took the opportunity to insult him for having a different opinion than their own.

“MATERRRR not you,” wrote @tajae411, referring to the stand-up comedian’s character in Pixar’s Cars franchise. “People get pregnant bro. This is just facts.”

“I don’t think we read the same headline if this is your reaction to people who are pregnant being referred to as such,” they added. “Cmon bro.”

“Aww did that hurt your feelings? Bet you’d be upset if someone left redneck racist out of the Republican Party eh?” wrote disgruntled Twitter user @forehunger, implying that Larry the Cable Guy is a redneck for having a different opinion.

The comment section under Forbes magazine’s tweet publicizing the report was also full of users calling out the media outlet for the repeated use of the woke term.

“Do you mean women?” asked @SpringSteps. “Maybe 24/7 media fear-mongering is causing this to happen since stress is also theorized to cause preterm labor?”

“In 1,000 years when archeologists uncover bodies from 2021 they will find two things,” speculated @thdivewhisperer. “Boys. And girls.” 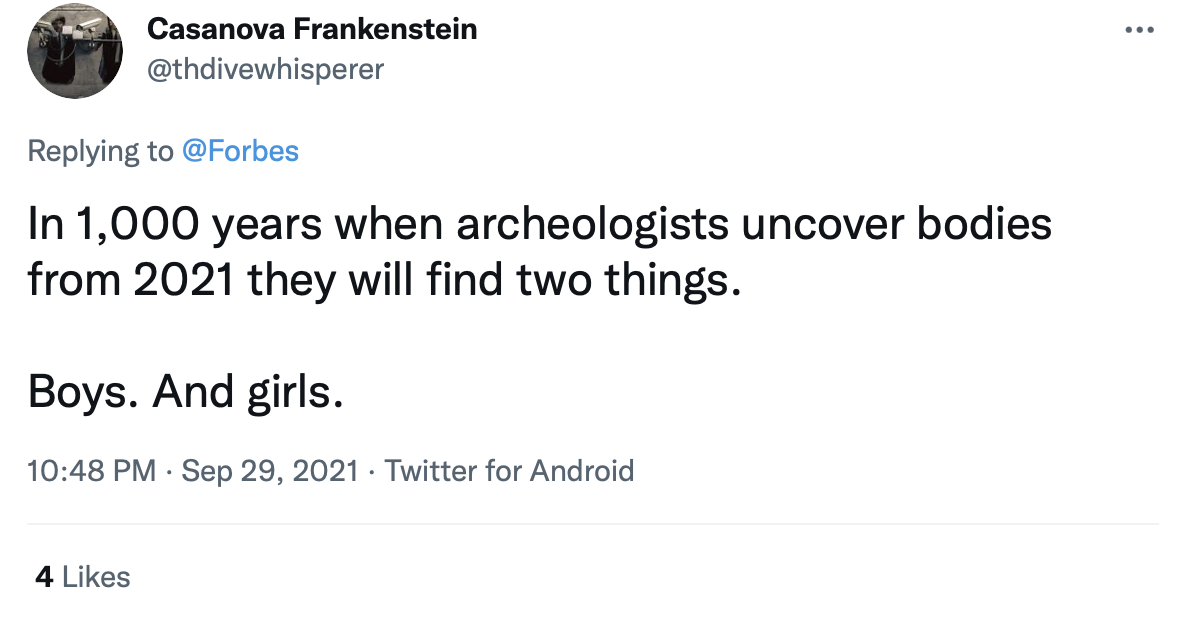 User @thoucynical_  wrote “The only people who can get pregnant are women.”

“Even if a tiny tiny number insist they aren’t female, they still are. This is not inclusive. It is the erasure of women,” the user concluded. 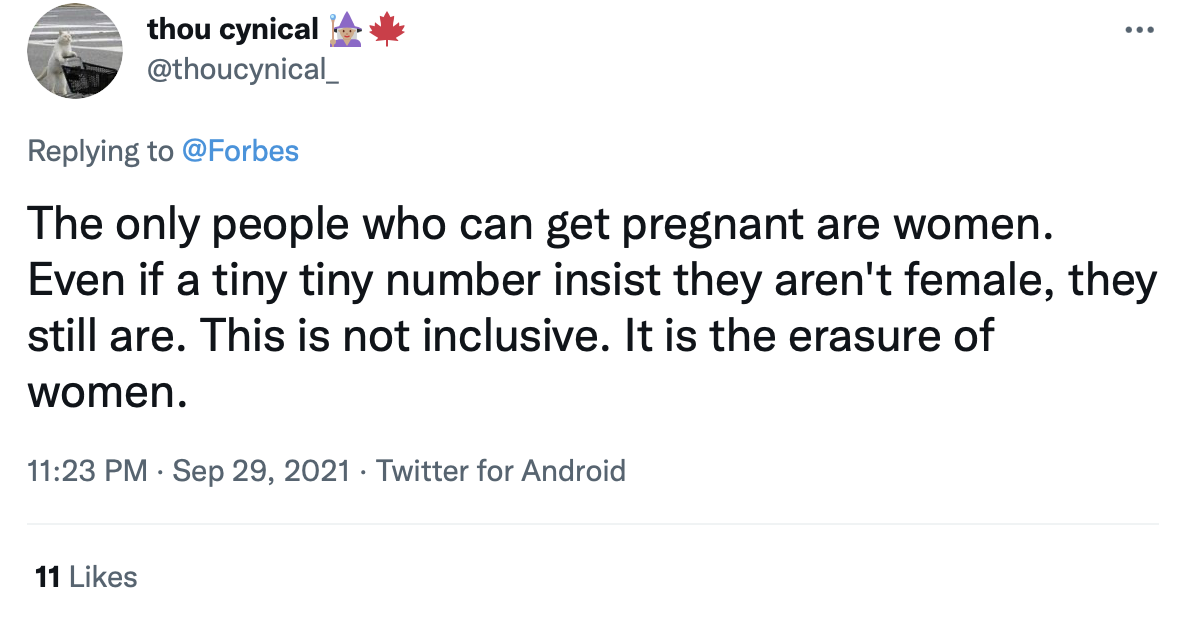 @DontcallmeCis exclaimed, “its women! women is an inclusive term that includes all adult females, including self hating women who demand to be seen as men or other made up genders.”

“Since you seem to be having a difficulty…” asserted @DRussell76 before providing a definition of the word woman as provided by Merriam-Webster. 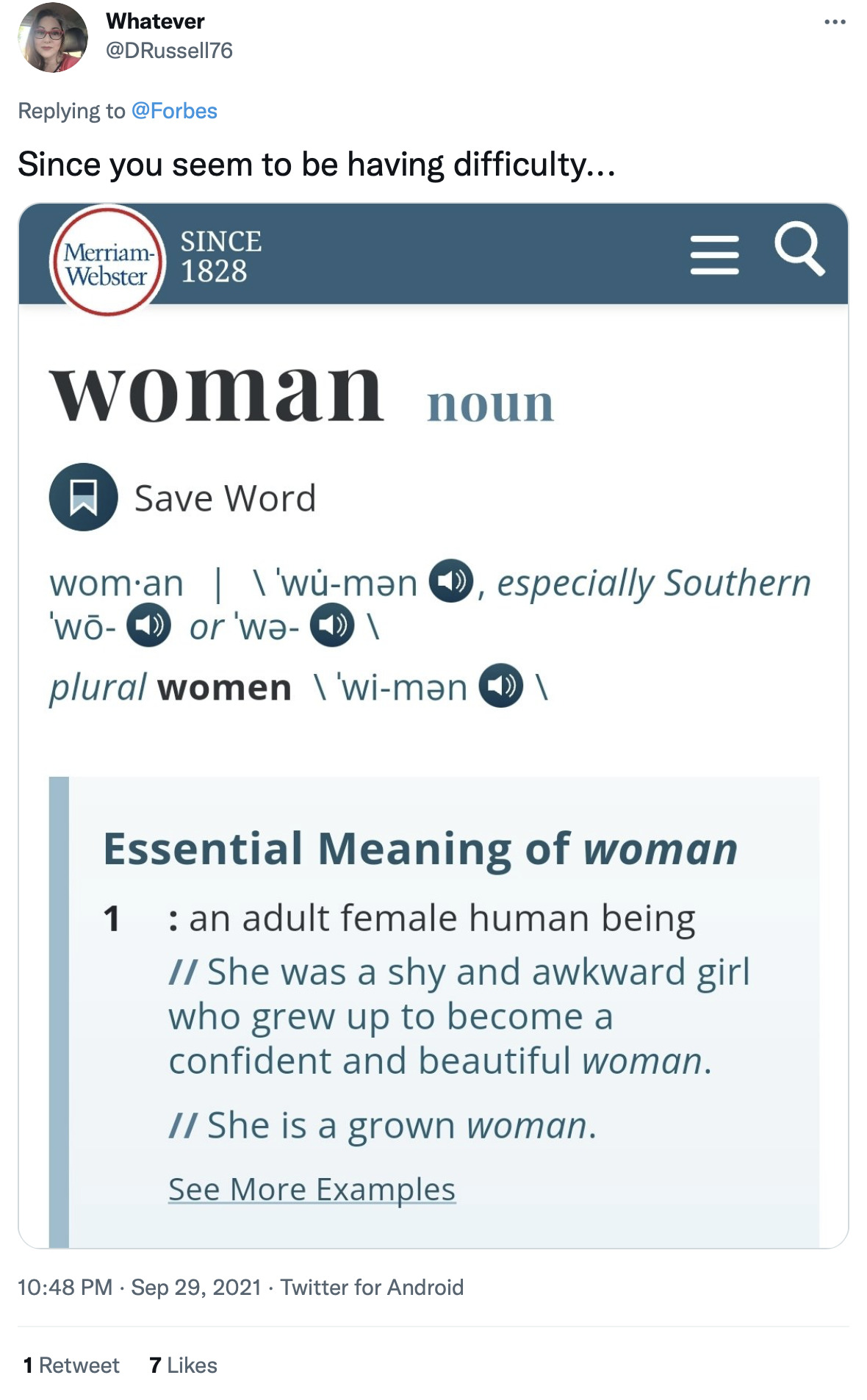 @GenBiotics chimed in, “I think the word you’re looking for is ‘women.’”

“That would be pregnant *women* you’re trying to scare. Also, some obstetricians have advised to hold off if you’re already pregnant because there still isn’t enough data to know how it will affect the baby,” suggested @mac_moonlight. “By your own admission that data is still being collected.” 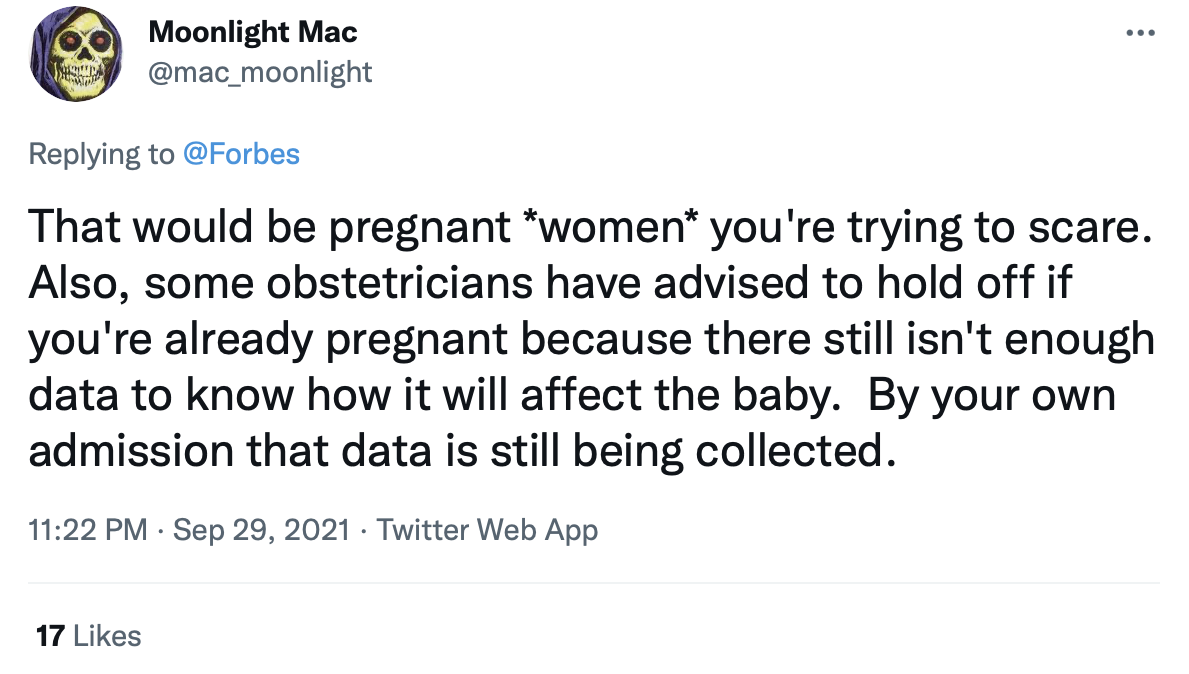 @Marie2Eyes simply stated that the term “pregnant people” is offensive.

@MellieAdamson wrote “‘women’… ‘expectant mothers’…? Just wanting to reinforce the messaging that ‘woman’ is now a dirty word not to be published in print anymore?”

@okboomerbtw sarcastically interjected, “Not everyone identifies as a person. Some identify as animals or even objects. Please use the term ‘pregnant objects.'”

“WOMEN get pregnant. WOMEN give birth. WOMEN matter,” asserted @oriel_l in their call out of Forbes’ use of the woke term.

“Do you mean pregnant women?” asked @va_senior. “Since only actual women can give birth then ‘people’ is unnecessarily vague. If this story about higher risk is true then stop cloaking it with your bulls—t woke agenda.” 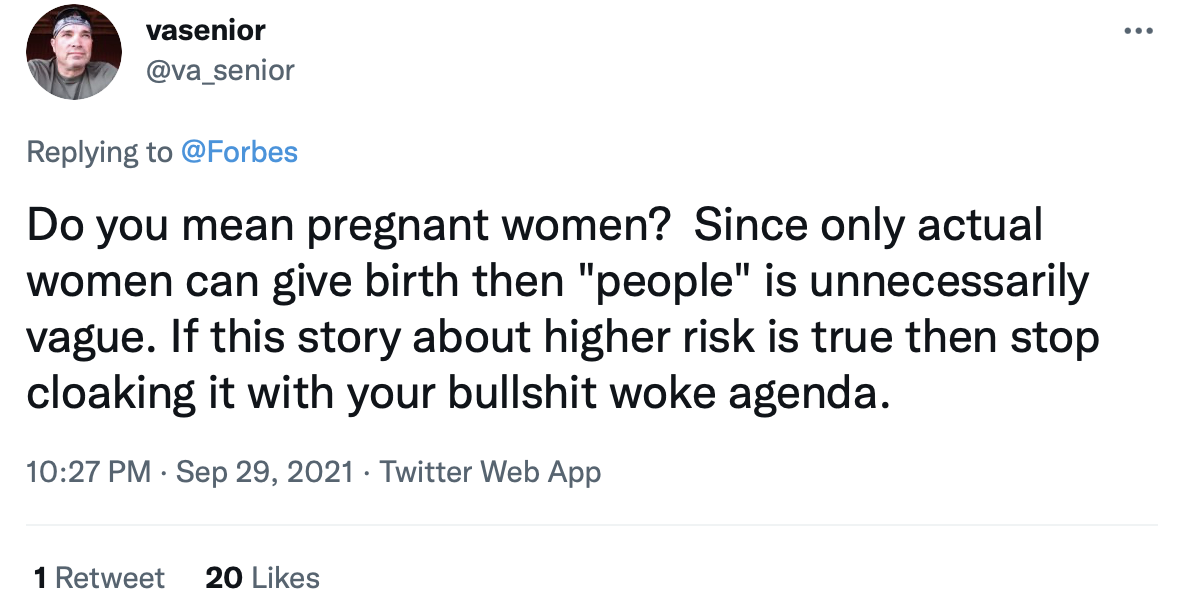 Making a fairly compelling point, user @YellaMiniCooper asserted, “If you have to tiptoe through words to speak to people, those people are not safe. This is why I no longer hang with the pronoun and gender fluidity folks. I’m smart enough to have read Safe People by Cloud and Townsend and it has served me very well. Women get pregnant. Only.” 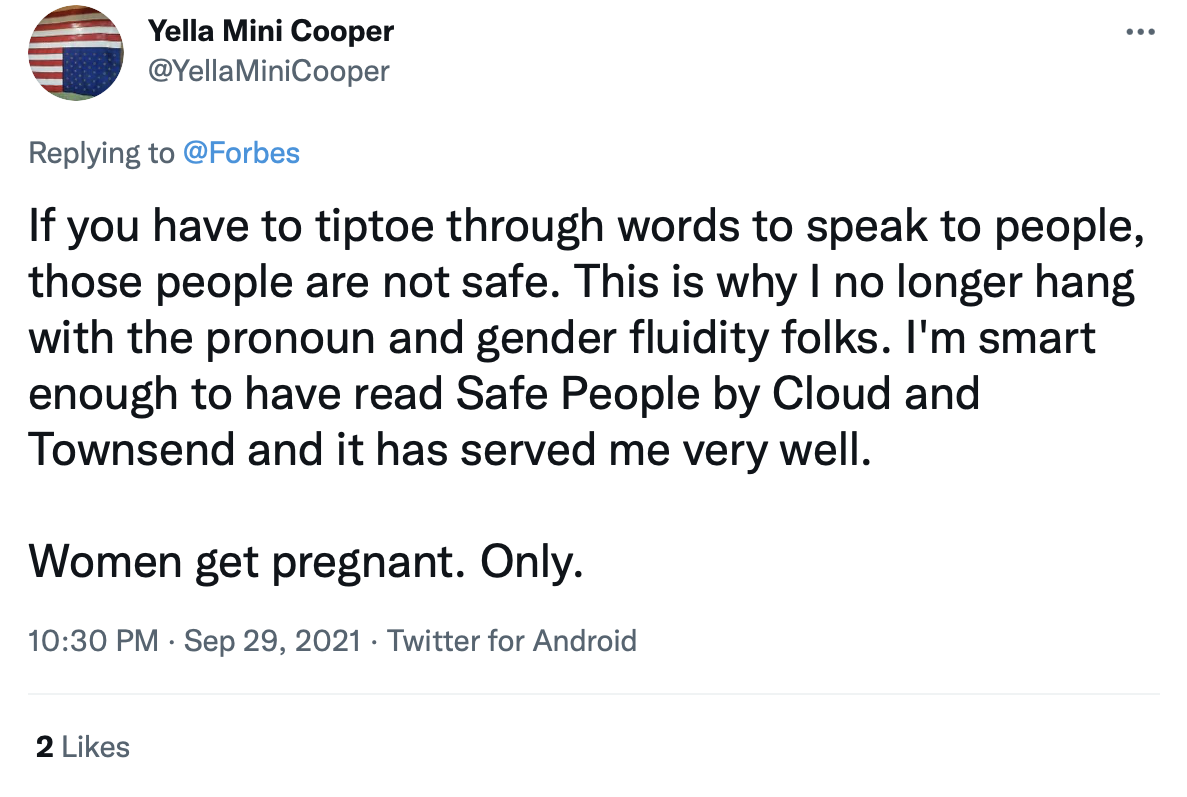 Eventually, Speakman addressed the situation after facing a sizeable number of users who were openly calling her out on Twitter.

In reply to @Carl_Stawicki, who said, “Perhaps @kimberleespeaks can chime in and explain why she chose the word ‘people’ instead of ‘women.’I’m genuinely curious,” Speakman replied, “Hello! Yes, I can chime in! My article is based on this CDC urgent health advisory linked below. The CDC used ‘pregnant people’ in its headline and so to be accurate to the advisory, I also used ‘pregnant people.'” 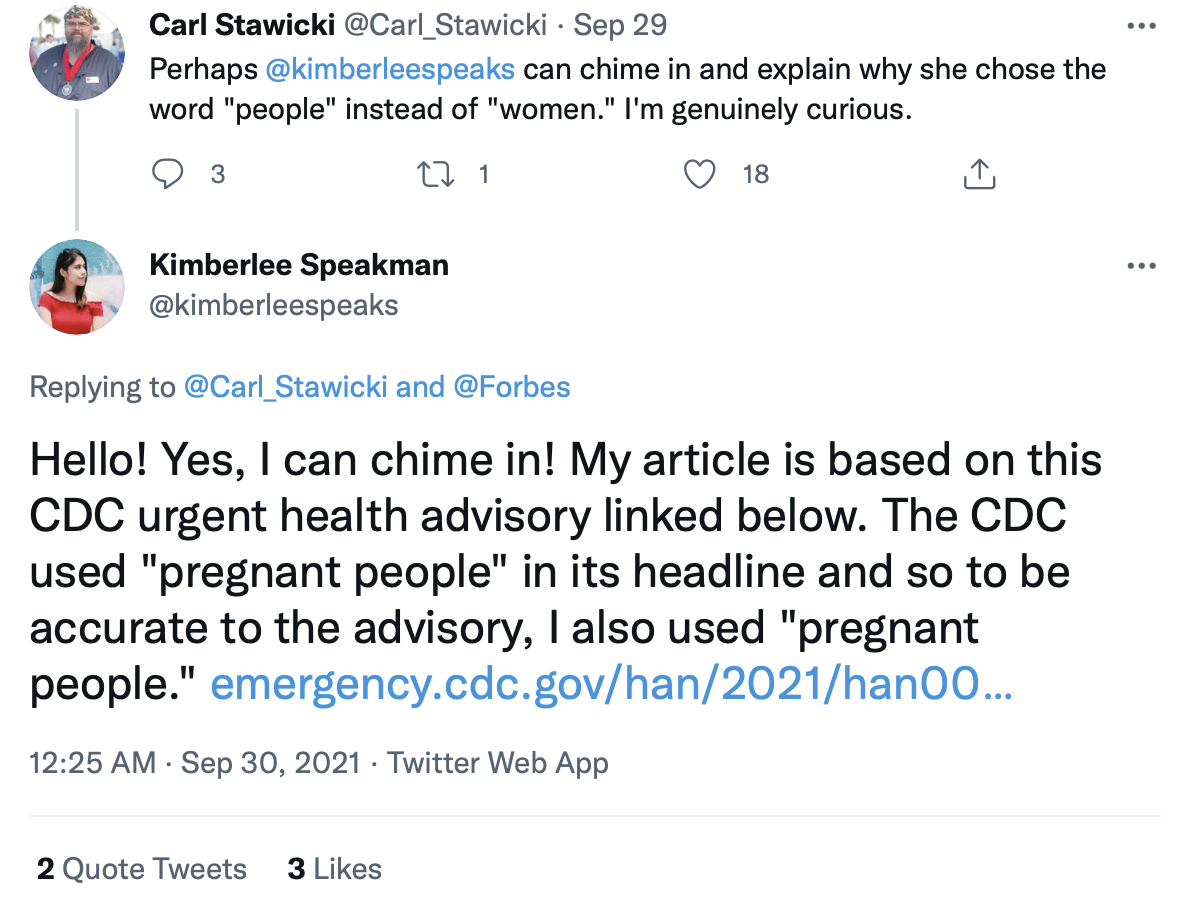 What do you make of Larry the Cable Guy’s criticism of Forbes and the CDC’s usage of the term “pregnant people” instead of “pregnant women”? Let us know your thoughts on social media or in the comments section down below!