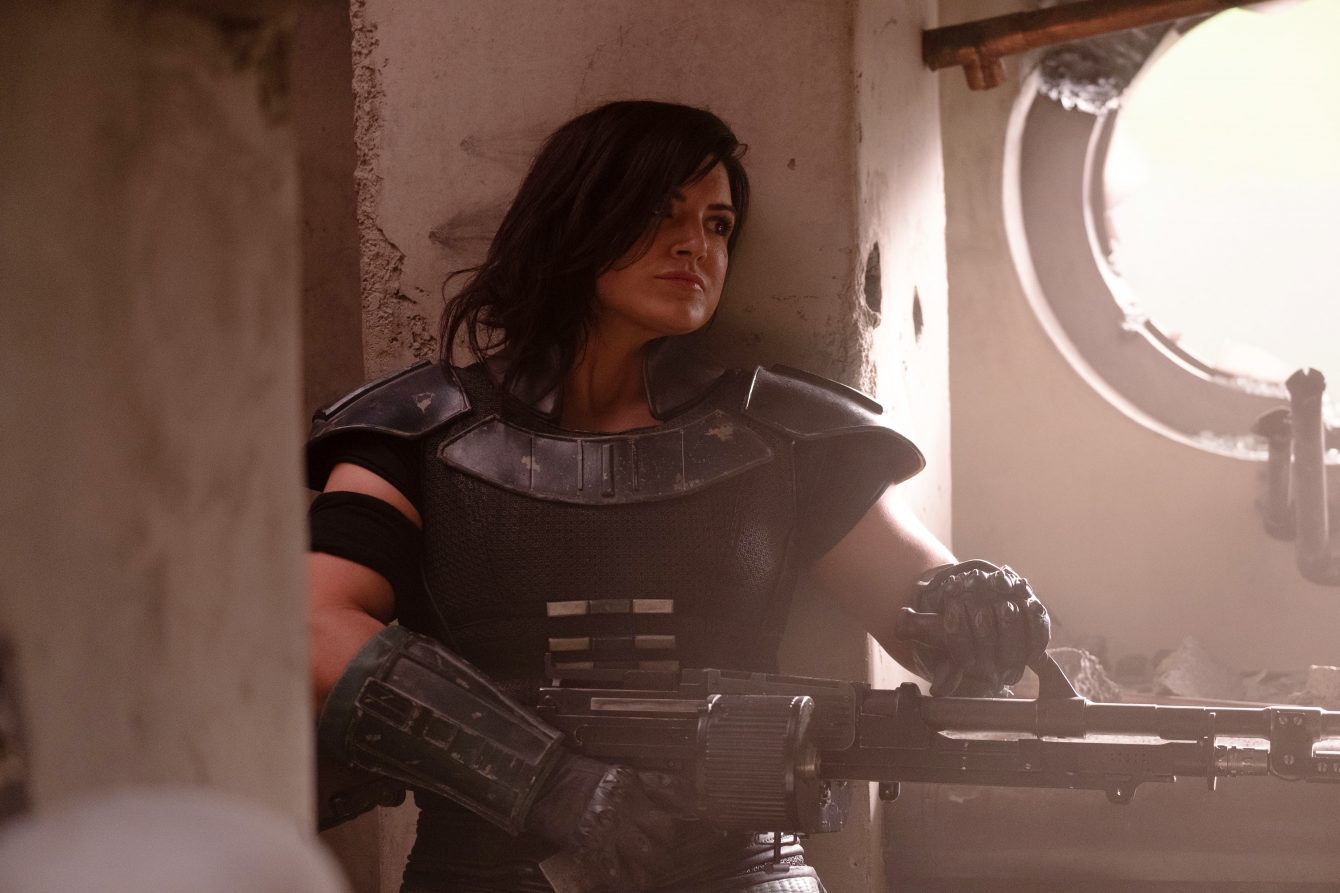 “When is enough going to be enough? The vaccine is obviously not for everyone,” wrote Carano to her near 1 million followers on Twitter, encouraging them to “Check the Vaers report.”

She added, “I know someone who passed away from the vaccine as well. Healthy 56 year old woman. The vaccine took her out in 3 days. These Biden mandates are murdering these people.”

The actress shared the anecdote in response to the obituary of Jessica Berg Wilson, who was described an “exceptionally healthy and vibrant 37-year-old young mother with no underlying health conditions,” and said to have passed away from side effects caused by the coronavirus vaccine.

As per the information officially provided on Berg Wilson’s obituary, the Seattle mother died from “COVID-19 Vaccine-Induced Thrombotic Thrombocytopenia.” Further, the obituary reveals that Jessica “had been vehemently opposed to taking the vaccine, knowing she was in good health and of a young age and thus not at risk for serious illness.”

😔 when is enough going to be enough?
The vaccine is obviously not for everyone.
Check the Vaers report.
I know someone who passed away from the vaccine as well.
Healthy 56 year old woman.
The vaccine took her out in 3 days.
These Biden mandates are murdering these people. https://t.co/OCCe4oVOXM

The “Vaers report” mentioned by Carano refers to the Vaccine Adverse Event Reporting System, an organisation co-managed by the Centers for Disease Control and Prevention (CDC) that acts as a “national early warning system to detect possible safety problems in U.S.-licensed vaccines.”

As per the organisation’s official website, “VAERS is a passive reporting system, meaning it relies on individuals to send in reports of their experiences to CDC and FDA.” However, the site also stipulates that “VAERS is not designed to determine if a vaccine caused a health problem, but is especially useful for detecting unusual or unexpected patterns of adverse event reporting that might indicate a possible safety problem with a vaccine.”

More specifically, Carano encouraged her Twitter followers to check the VAERS report regarding adverse reactions to the COVID-19 vaccine. According to the organisation’s official FAQ, “Healthcare providers are required to report to VAERS the following adverse events after COVID-19 vaccination [under Emergency Use Authorization (EUA)], and other adverse events if later revised by CDC.”

VAERS also lists a number of adverse effects patients should look out for following inoculation of the COVID-19 vaccine. What’s more, the organisation encourages healthcare providers “to report to VAERS any additional clinically significant AEs following vaccination, even if they are not sure if vaccination caused the event.”

Interestingly, @ke11ybender’s initial tweet was originally labelled as misleading information by Twitter’s fact-checkers, but once the story caught the attention of the media, the social media platform removed the controversial label. 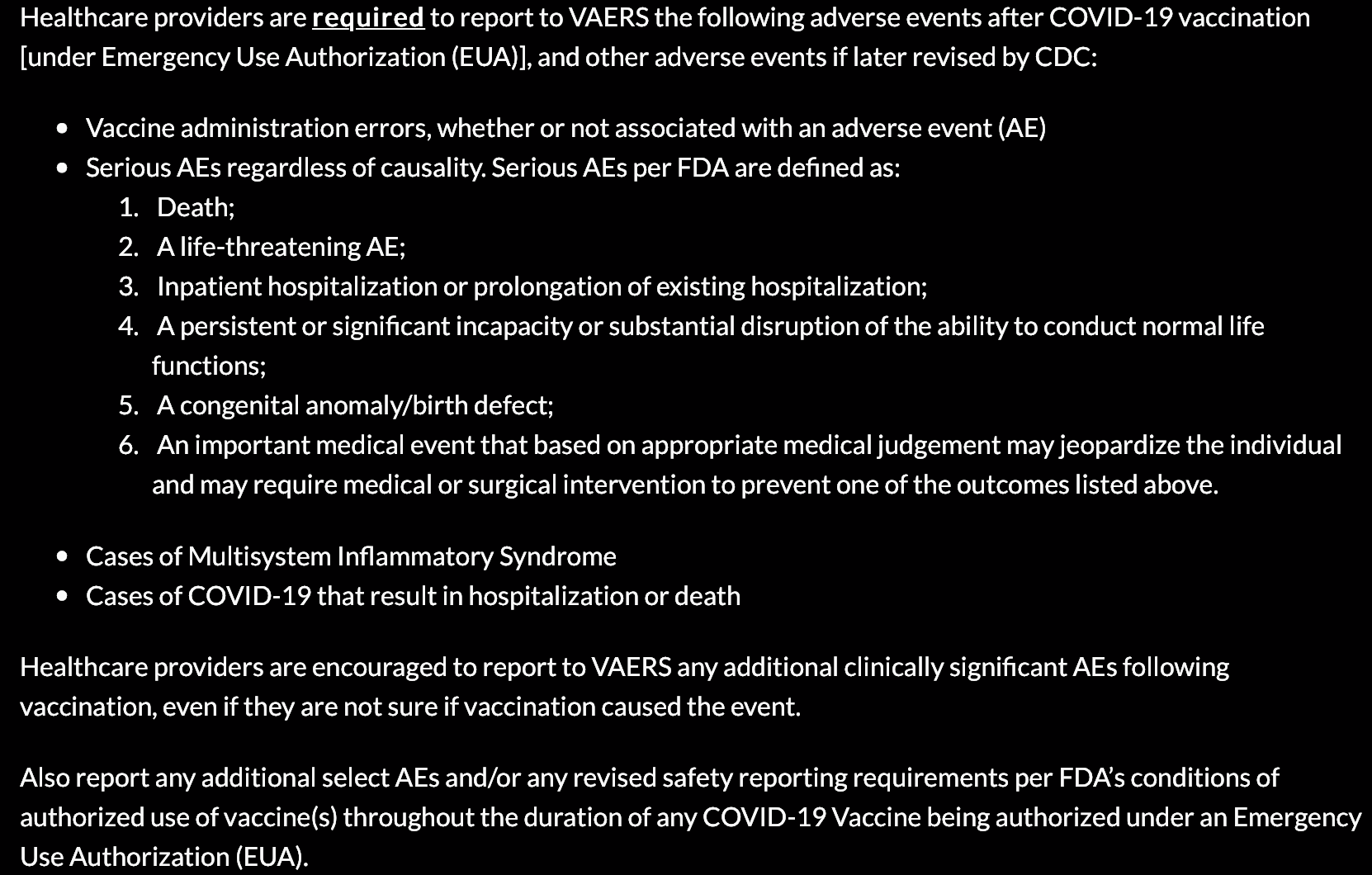 Carano encouraging her followers to check the VAERS website is not something that should break any of Twitter’s community guidelines, much less prompt the social media platform to label her tweet as misleading.

As of publication, the social media platform has not yet removed the “misleading” label on Gina Carano’s tweet, and it is fair to speculate that Twitter’s fact-checkers will not be making any effort to remove it any time soon – especially considering the platform’s infamous history regarding censorship, especially towards users with conservative leanings. 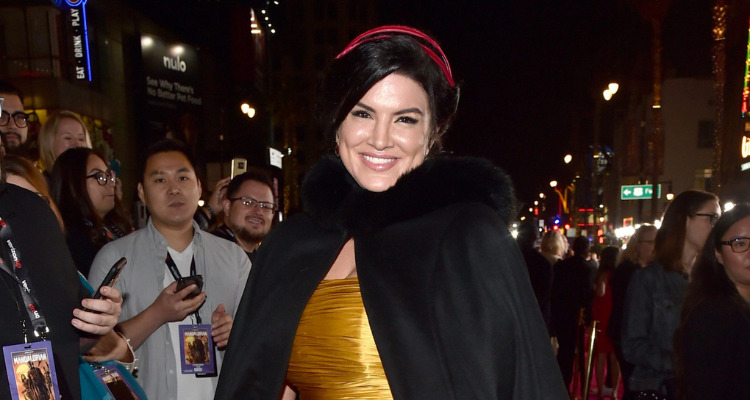 According to a recent investigative report by Project Veritas’ James O’Keefe, which claimed to shed some light on Pfizer’s COVID-19 vaccine, antibodies are actually more effective than the vaccines heavily being pushed by the government and mainstream media.

“When somebody is naturally immune, like, they got COVID…they probably have better, like, not better, but more antibodies against the virus,” unknowingly revealed experienced Pfizer bio-chemist Nick Karl.

He went on, “Because what the vaccine is — is, like I said, that protein — that’s just on the outside. So it’s just one antibody against one specific part of the virus. When you actually get the virus, you’re going to start producing antibodies against, like, multiple pieces of virus.”

“And not only just like that outside portion, like the inside portion, the actual virus. So, your antibodies are probably better at that point than the vaccination,” he added.

O’Keefe further asserted that Karl wasn’t the only one disclosing the information above and pointed to how two other Pfizer employees, Senior Associate Scientist Chris Croce and Pfizer scientist Rahul Khandke, had echoed the biochemist’s sentiment

Croce was recorded saying, “I mean, I still feel like I work for an evil corporation,” adding that Pfizer are “trying to keep track of everyone that’s been vaccinated versus the census of how many people are actually reported.”

“Basically, our organisation is run on COVID money now. You don’t talk about anything that can possibly implicate you or, like, Big Pharma,” Croce continued. “Even if you shut the door to the office, it’s kind of, like, who’s listening?” 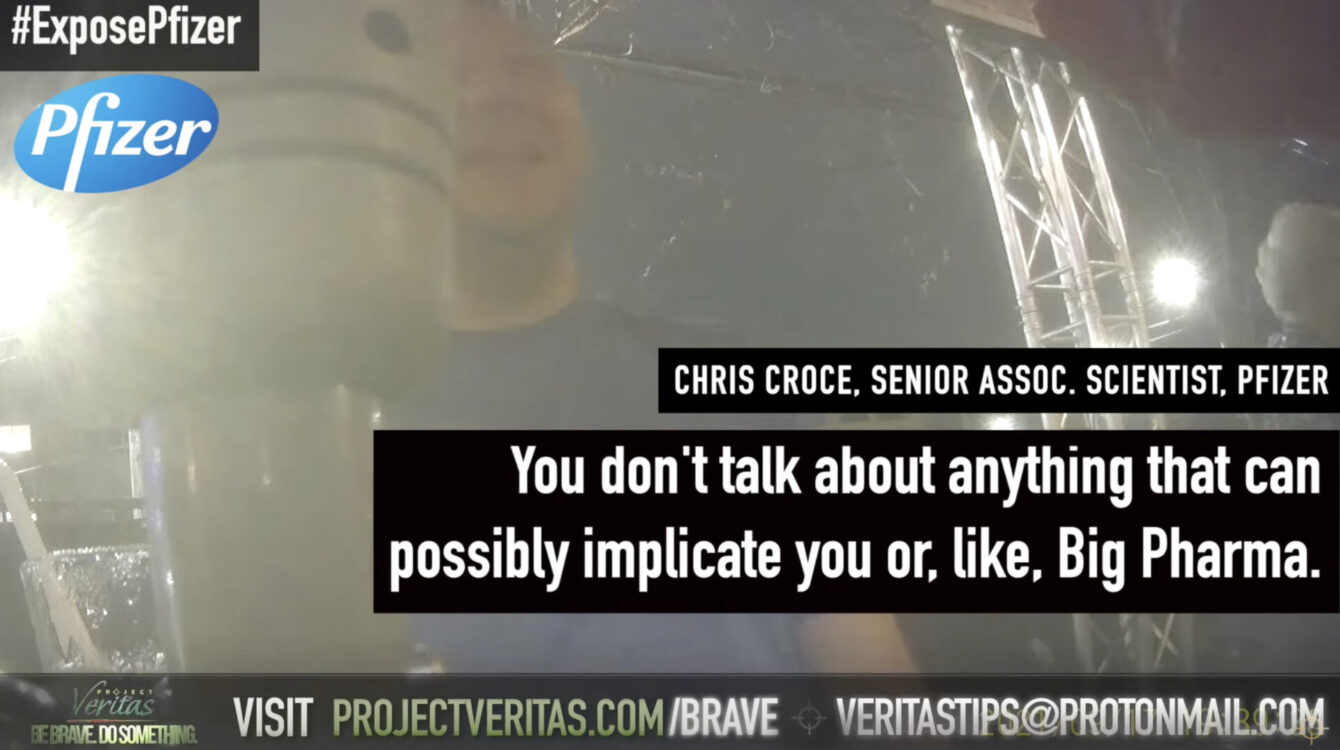 Carano has been openly in voicing her opinion about the COVIDE-19 virus, having regularly taken to social media throughout the pandemic to vent her frustrations regarding vaccine and mask mandates as well as the government’s handling of the situation as a whole.

“What is happening is wrong and will not lead to a good place,” wrote the former The Mandalorian star on October 1st. “We are free to have difference of opinion even if you are police, military or health care professionals. Open communication and dialogue before it’s too late.”

Alongside her tweet, Carano shared an image that read, “They are systemically removing everyone from the police, the military and the medical field who won’t get in line and do whatever they tell them to keep their jobs.” 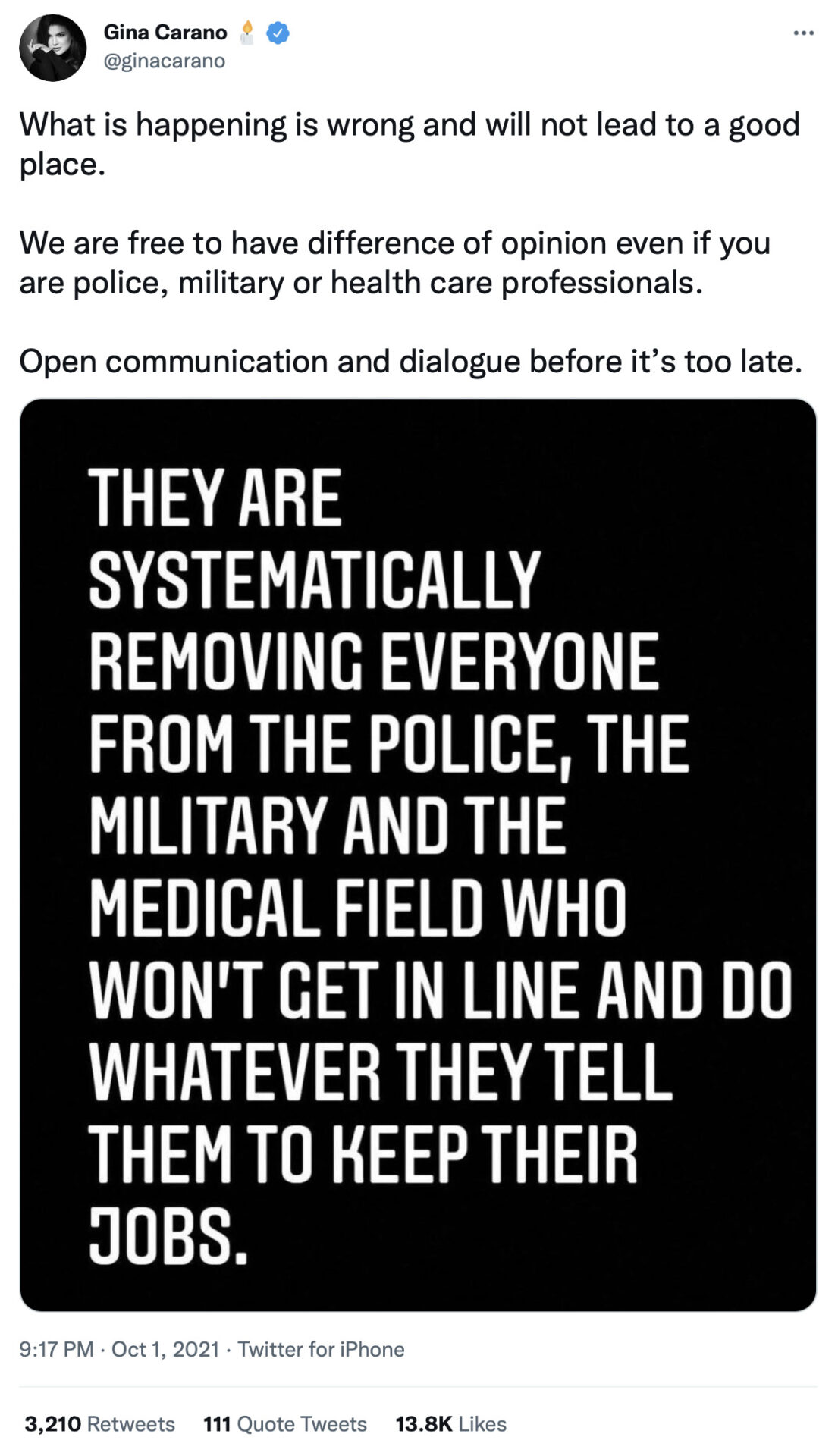 The actress also shared the ‘Who Killed Hannibal’ meme from The Eric Andre Show, calling out the United States government for killing the country’s economy and attempting to blame it on the COVID-19 virus. 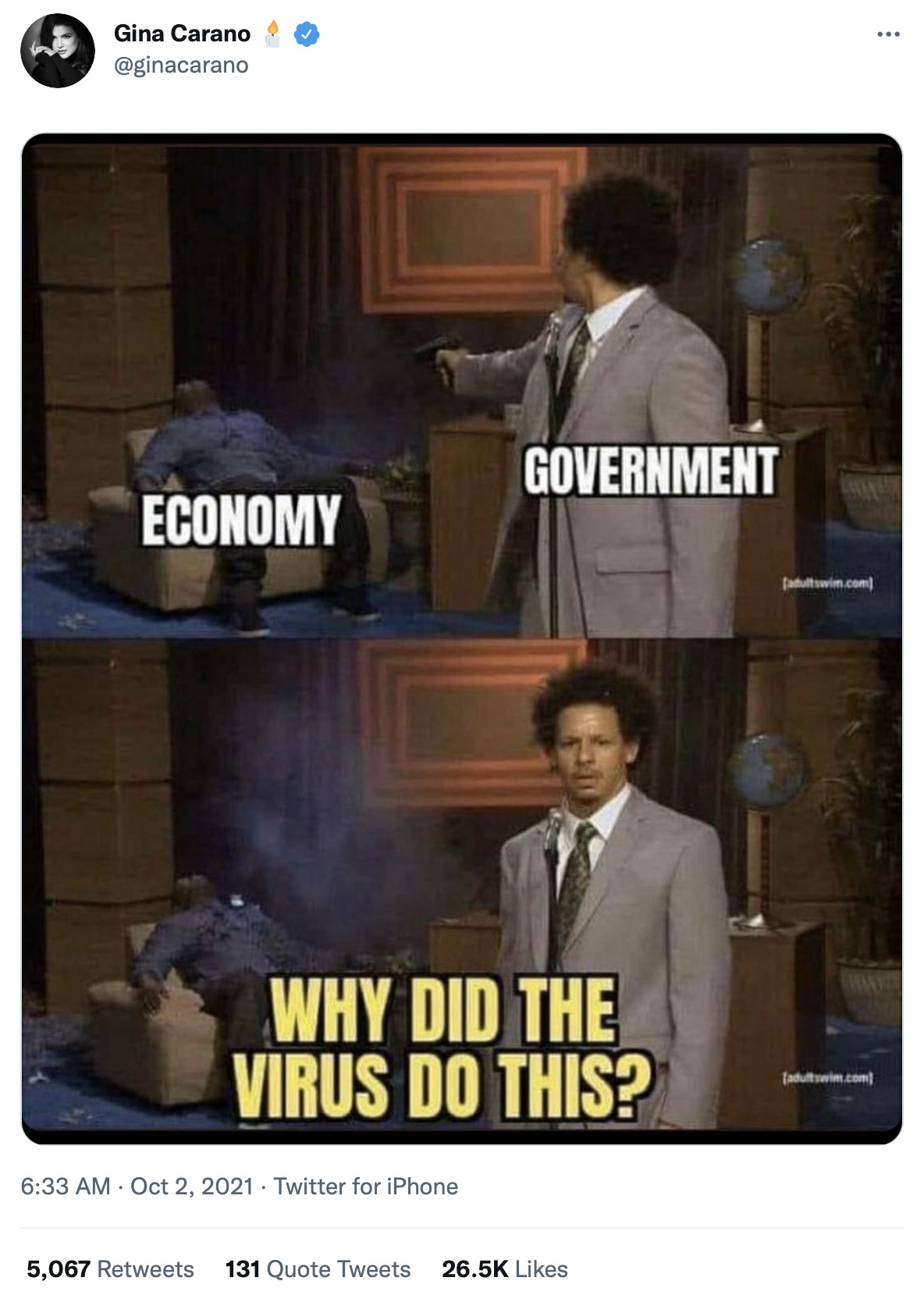 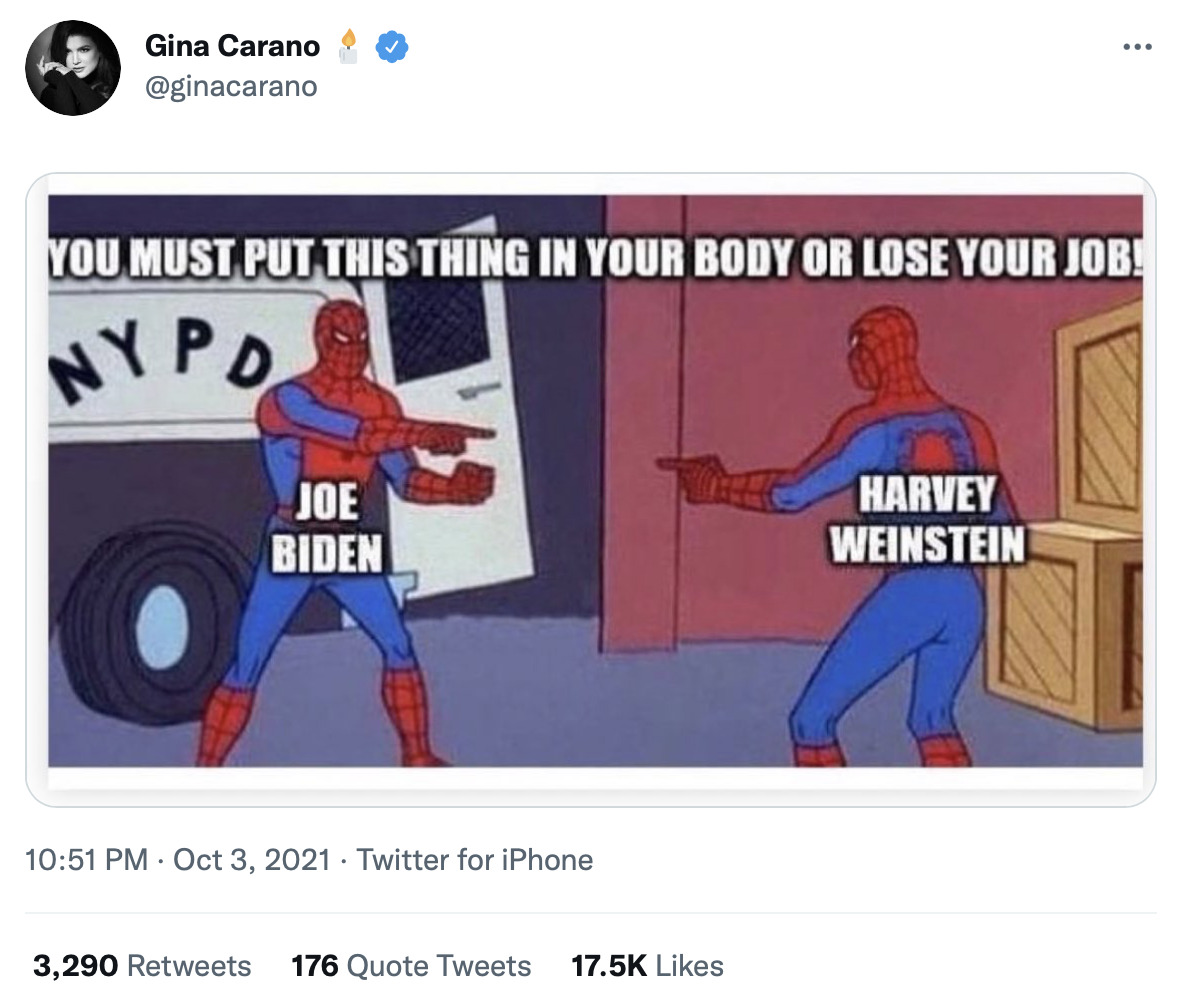 “Socialism: Ideas so good that they have to be mandatory,” read another image shared by Carano, with which she compared COVID-19 mandatory vaccines, lockdown rules, and mask mandates to the authoritarian nature of socialist governments. 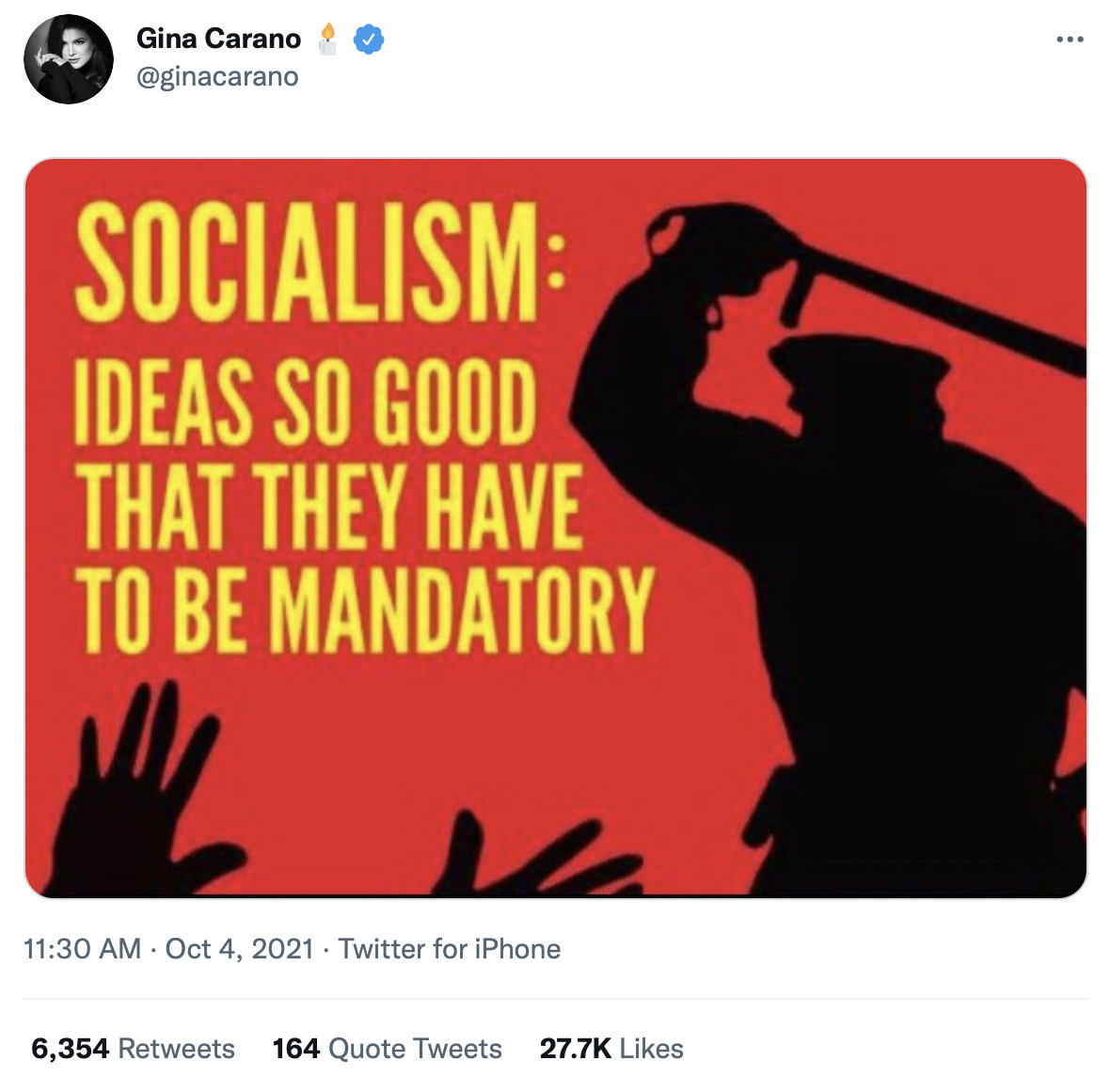 Carano also criticised Australia’s strict COVID-19 restrictions, condemning the country’s handling of the pandemic and the police’s “tyrannical” methods for dealing with those who oppose mask mandates and break lockdown rules.

“If they can arrest you for not wearing a mask & walking outside without permission, they can make up any reason to arrest you,” asserted the actress. “How do these police officers live with implementing tyrannical rule over the people they have vowed to protect. They know it’s wrong.”

What do you make of  Carano’s tweet being labelled as misleading by Twitter’s fact-checkers? Let us know your thoughts on social media or in the comments down below!