What’s fascinating, however, is the fact that the comments deemed offensive were made by the Gran Torino director almost 50 years ago at the 1973 Academy Awards ceremony. 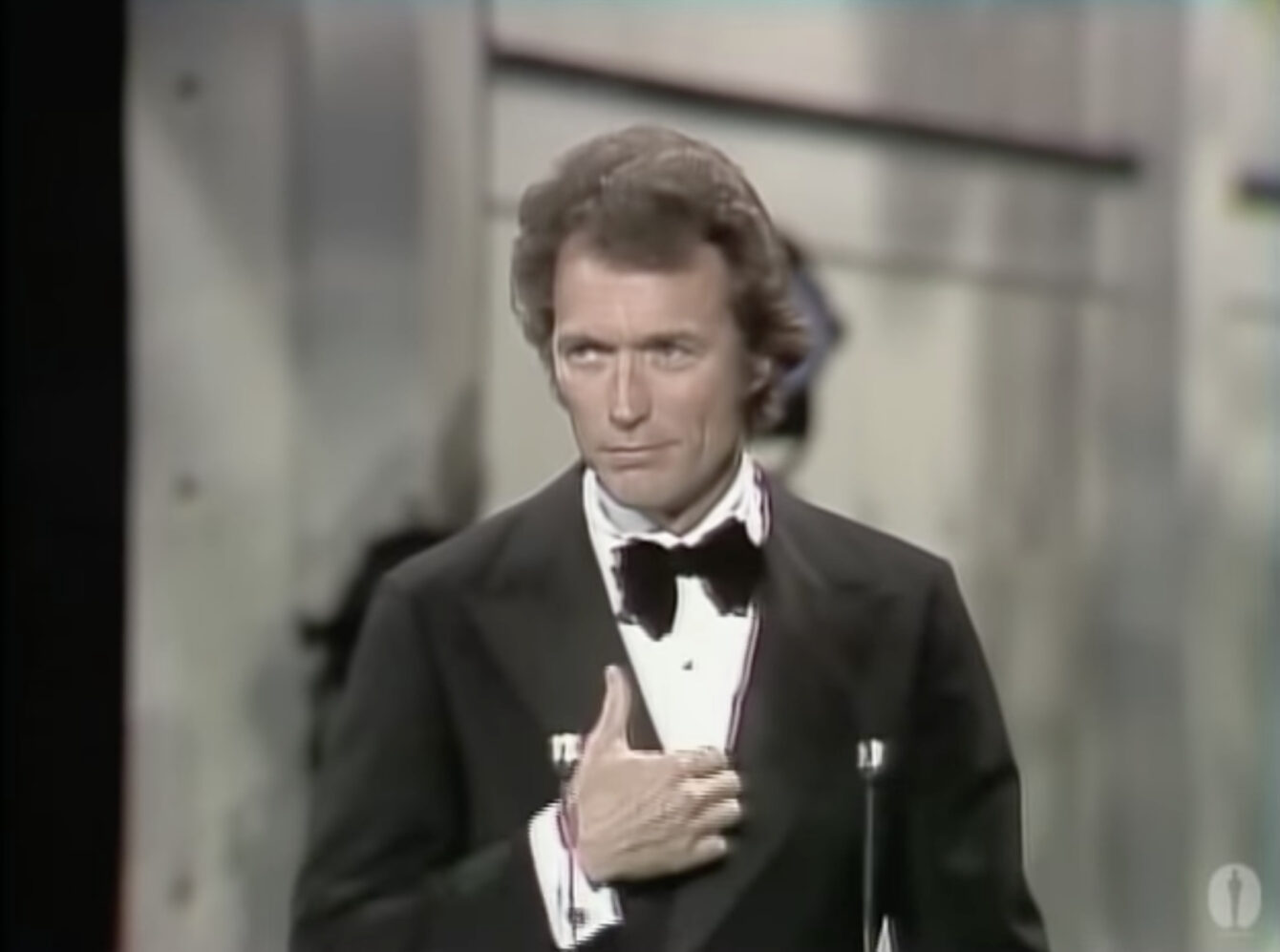 In order to understand why social justice warriors are so riled up over Eastwood’s so-called ‘racist remarks’, one must first understand the context of the events that happened during that years award ceremony.

That night, Marlon Brando won the Oscar for Best Actor for his performance in The Godfather, but surprised the audience by refusing to accept the award. Instead, Brando invited actress, model, and Native American civil rights activist Sacheen Littlefeather to attend the ceremony in his stead and explain why he chose to refuse his award.

“I’m representing Marlon Brando this evening, and he has asked me to tell you, in a very long speech — which I cannot share with you presently because of time, but I will be glad to share with the press afterwards — that he would very regretfully cannot accept this very generous award,” said Littlefeather after formally introducing herself to the audience.

She continued, “And the reasons for this being are the treatment of American Indians today by the film industry, and on television in movie reruns, and also with recent happenings at Wounded Knee.”

“I beg at this time that I have not intruded upon this evening, and that we will, in the future, our hearts and our understandings will meet with love and generosity,” the activist concluded her speech. 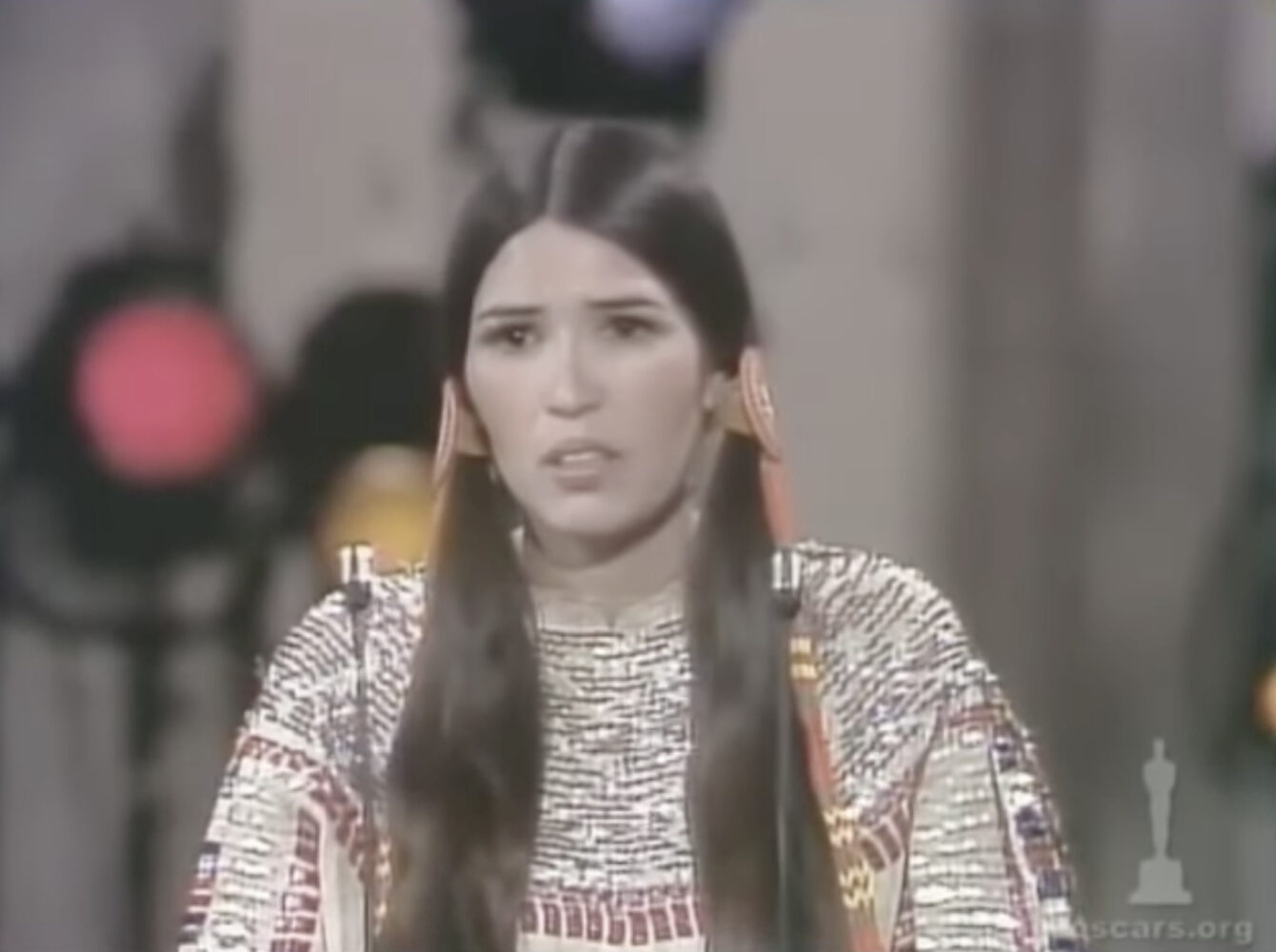 Related: Clint Eastwood To Film in Georgia for “The Ballad of Richard Jewel” Despite Hollywood Boycott Against The State

Later in the night, Eastwood was tasked with awarding the Oscar for Best Picture to that years winner, Francis Ford Coppola’s The Godfather. It was as he approached the stage to present the award that Eastwood took the opportunity to make a reference to Littlefeather’s speech – a reference which has successfully managed to trigger woke social justice warriors nearly five decades later.

“I don’t know if I should present this award, on behalf of all the cowboys shot in all the John Ford Westerns over the years,” Eastwood joked as he presented Francis Ford Coppola’s The Godfather as the winner in the aforementioned category.

It’s relevant to note that, by that point in time, Eastwood had already been in his fair share of Western films, including A Fistful of Dollars, For A Few Dollars More, and The Good, The Bad, And The Ugly, to name only but a few. 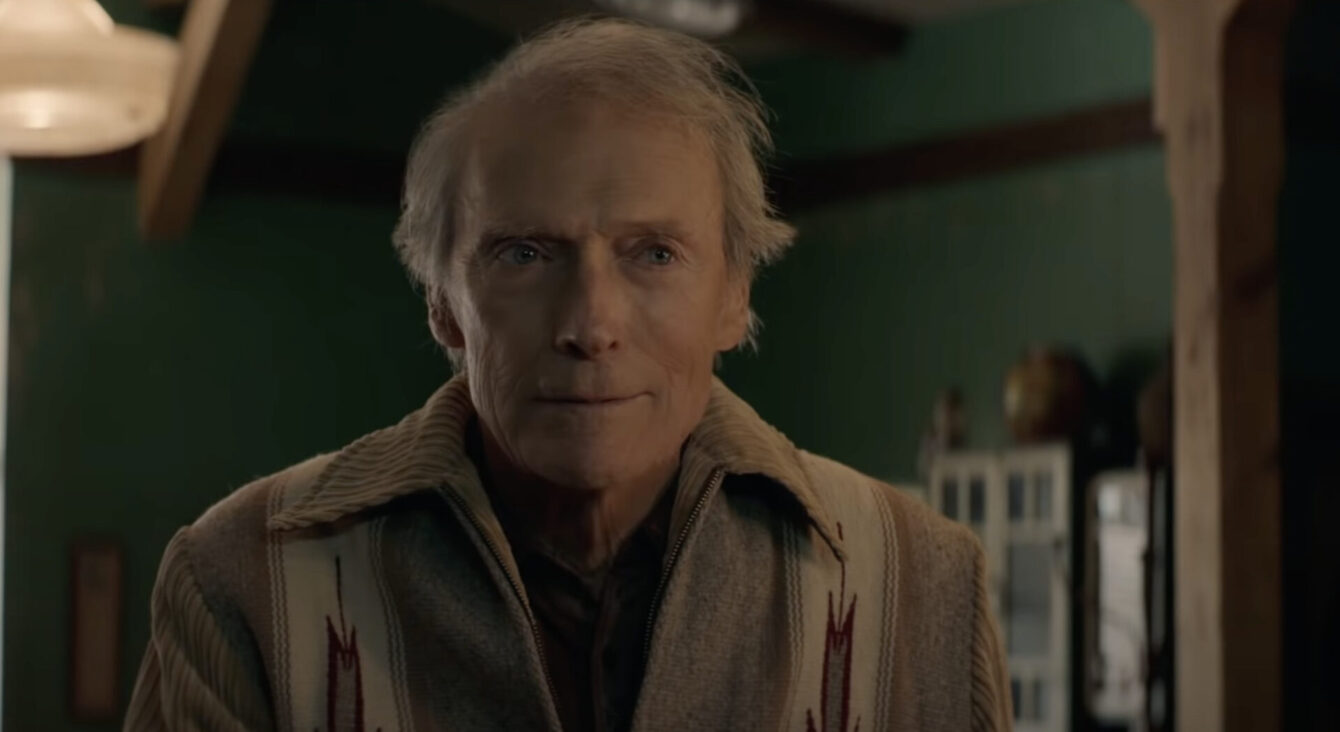 Eastwood’s comment just recently came under fire after woke political activist Rafael Shimunov shared the clip of Littlefeather’s speech to his over 50k followers on Twitter.

“Native American actor Sacheen Littlefeather boo’d (and cheered) by Hollywood at the Oscars before being mocked by Clint Eastwood and almost physically assaulted by John Wayne simply for asking that Indigenous people not to be dehumanized in film,” reads the caption on Shimunov’s tweet.

1973: Native American actor Sacheen Littlefeather boo'd (and cheered) by Hollywood at the Oscars before being mocked by Clint Eastwood and almost physically assaulted by John Wayne simply for asking that Indigenous people not to be dehumanized in film.pic.twitter.com/BgOiuBq4hR

In an attempt to kickstart a smear campaign against the actor, the woke activist then presented a number of articles – most of which were nothing more than opinion pieces from left-leaning publications who constantly look for things to be offended by – as evidence that Eastwood was an inherent racist.

“Clint Eastwood never stopped by the way,” reads a follow-up tweet that points us towards an article published by Indie Wire, which claims that Clint Eastwood’s Gran Torino is a racist movie, as well as an article by Salon that proposes the Clint Eastwood-directed American Sniper film has a “Muslim problem” that embraces Navy SEAL sniper Chris Kyle’s “toxic ideas” and spreads propaganda. 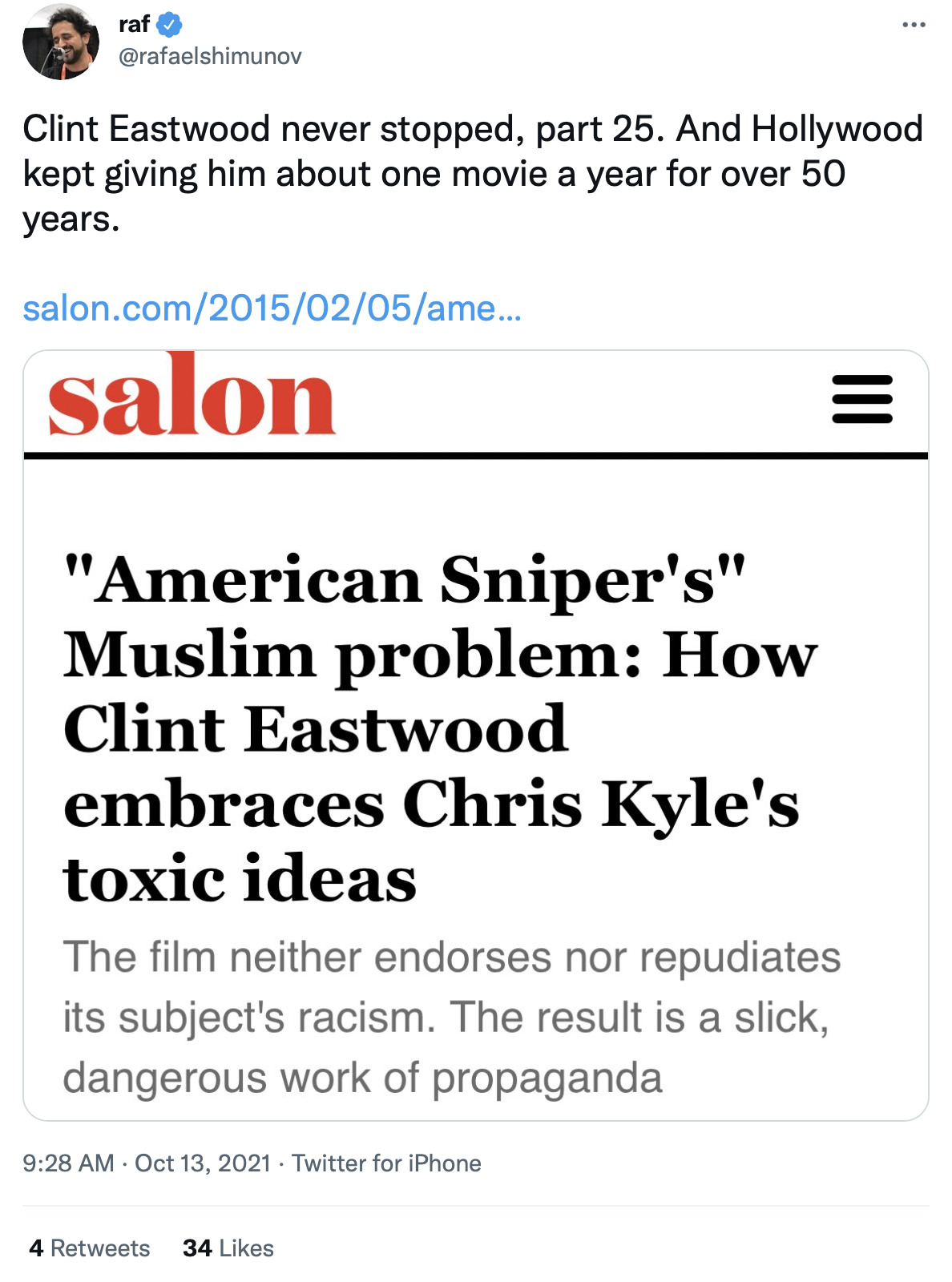 This fake outrage over the allegedly “racist” comments made by Eastwood almost 50 years ago, the characters he’s portrayed, and the movies he has made may have been prompted by the fact that he’s one of the few Hollywood celebrities who openly identifies as a conservative and registered Republican.

Politics aside, Eastwood is among the most successful actors and directors in Hollywood, having starred in over 80 won a total of 4 Academy Awards in both the Best Picture and Best Director categories across his long and storied career.

Furthermore, most people on social media have responded to the outrage campaign by showing their support for the 90-year-old actor, so this feeble attempt to cancel Eastwood has been rather futile; not like Mr. Eastwood would care, though. 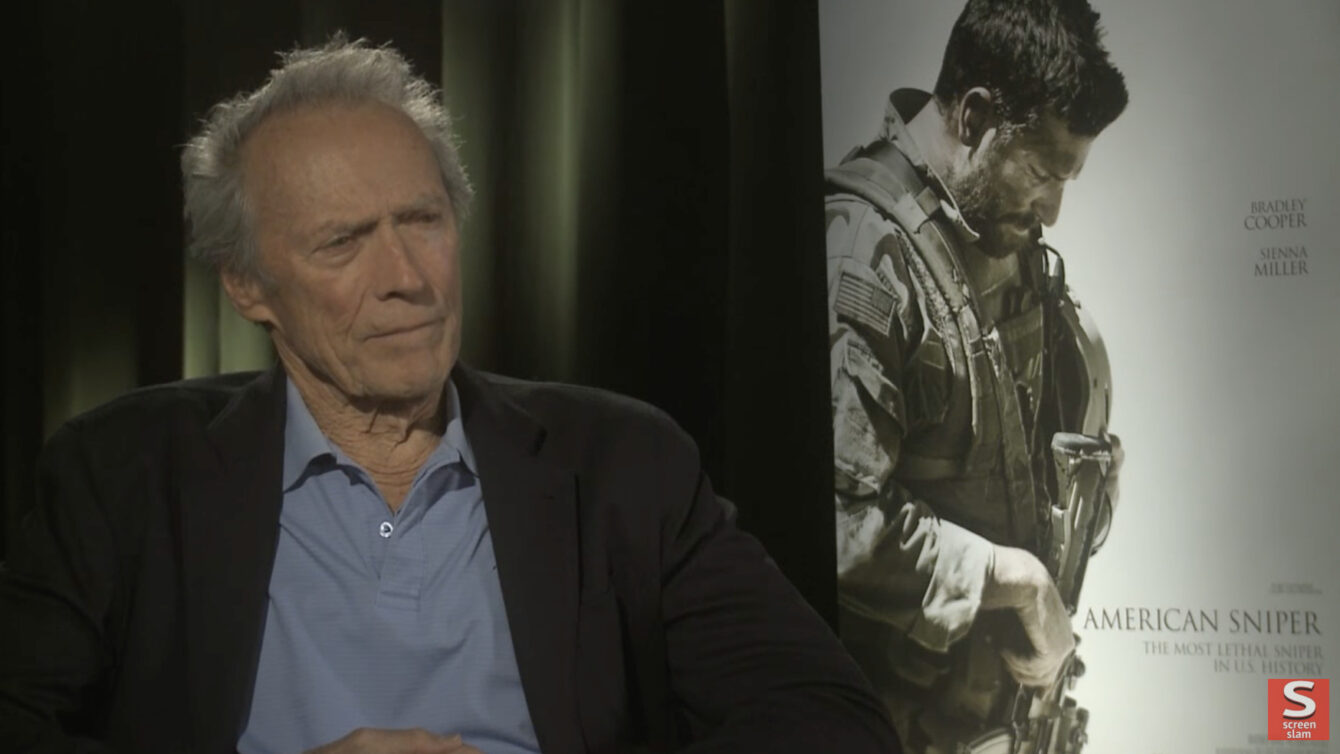 What do you make of this feeble attempt to cancel Eastwood for a comment he made almost five decades ago? Let us know your thoughts on social media or in the comments section down below!