A Charles Schulz illustrated comic book called Is This Tomorrow that was published by the Catechetical Guild Educational Society in 1947 and predicted the current disastrous state of American politics and its moral fiber.

While Schulz provided illustrations the book was written by F. Robert Edman and Francis McGrade. 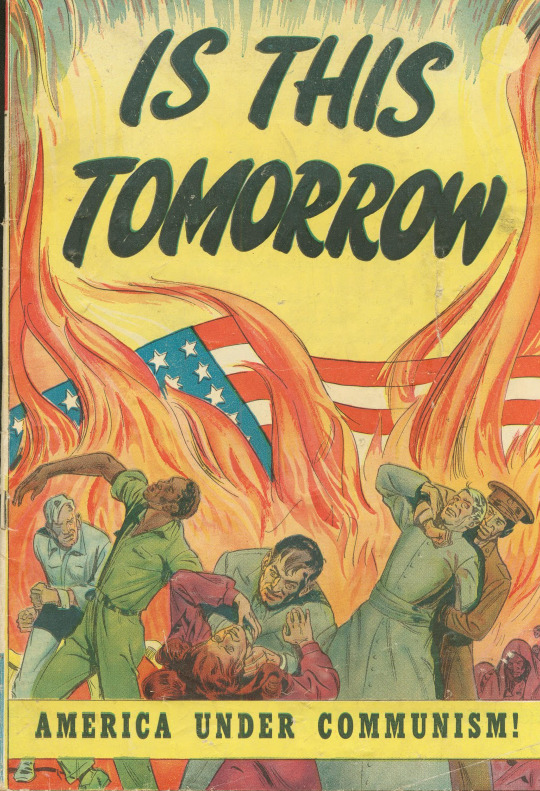 The book declares right from the get go that it was published with one purpose and that purpose is “TO MAKE YOU THINK! To make you more alert to the menace of Communism.”

With the United States of America facing starvation, a communist by the man of Jones who is funded by the Kremlin outlines his plan to transform America into a communist country within a year.

His plan is to create a crisis and then hold the resources people will want and need in order to survive the crisis. In this case, that resource is food.

While Jones outlines two simple steps, a man named Brown, who is their head of propaganda, explains how they have created a front organization and already gained a number of notable supporters including a sitting U.S. Senator and a number of prominent left wing speakers.

Brown says, “As you know, a few of our boys starts a ‘front’ to oppose fascism or intolerance or something else that is unpopular. They get a few big names to back them…” 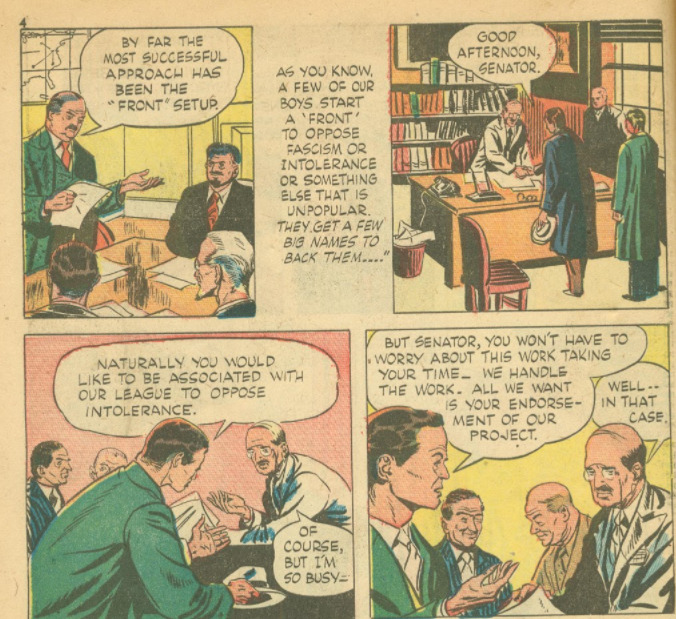 From there the head of propaganda uses editors and writers that they’ve trained for years to push their messaging on radio and in the written word. 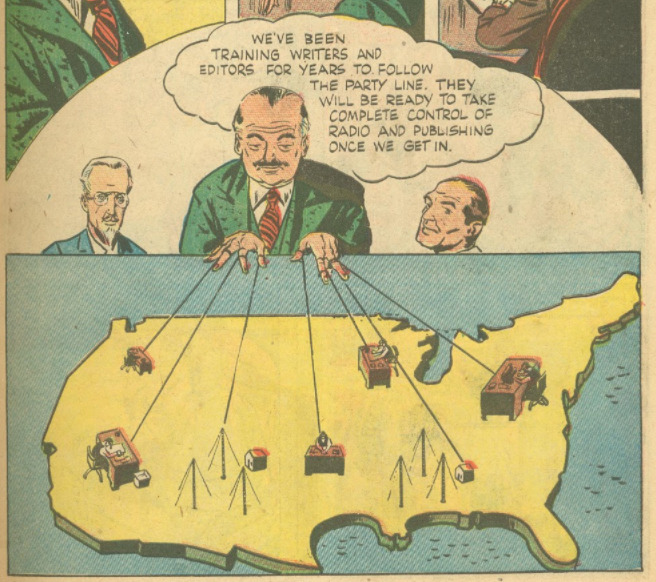 The censorship eventually comes down hard that any paper criticizing the regime will be unable to print unless they change their policy.

And it didn’t take long for the papers to accept the message.

The comic states, “Brown took over control of the news. Press associations got their orders quickly.” It even shows Brown telling what look like a group of editors, “You guys aren’t going to do any more guessing about politics. From now on you send out the news the government gives you, see?”

Their plan also involves ginning up racial and religious tensions on top of class tensions. In fact, the comic notes these tensions will be spearheaded by their people in Hollywood.

It states, “class conflict and the breakdown of bourgeois morals have been handled very well by our people in Hollywood.”

Hollywood is also key in eroding the sacredness of life. The comic states, “People are giving up their silly ideas about ‘sacredness’ of life.” 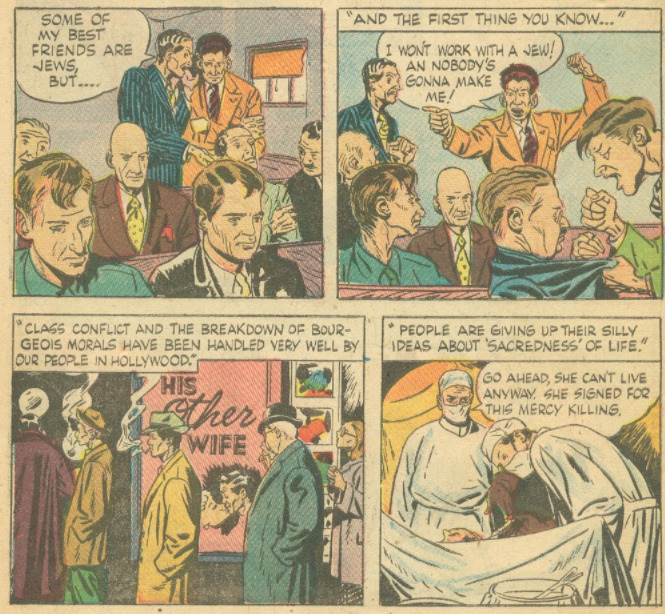 The racial and religious tensions first ginned up by Hollywood are intensified. At one point a woman falsely accuses a black man of insulting her. Chaos ensues and a riot breaks out in the city. 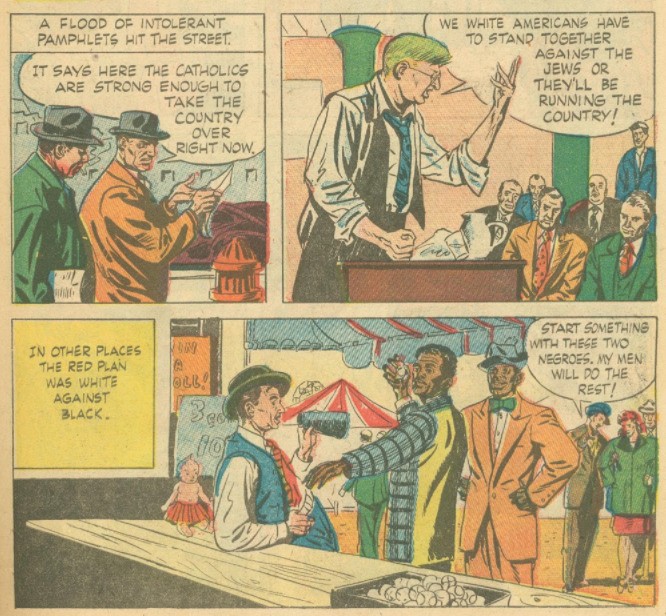 One of the more interesting parts of the comics is that it details how the communists take over labor unions, specifically making changes in the dead of night.

The comic explains, “For instance we drag out meetings until all but the party members go home then we elect our own officers and pass the measures we want.” 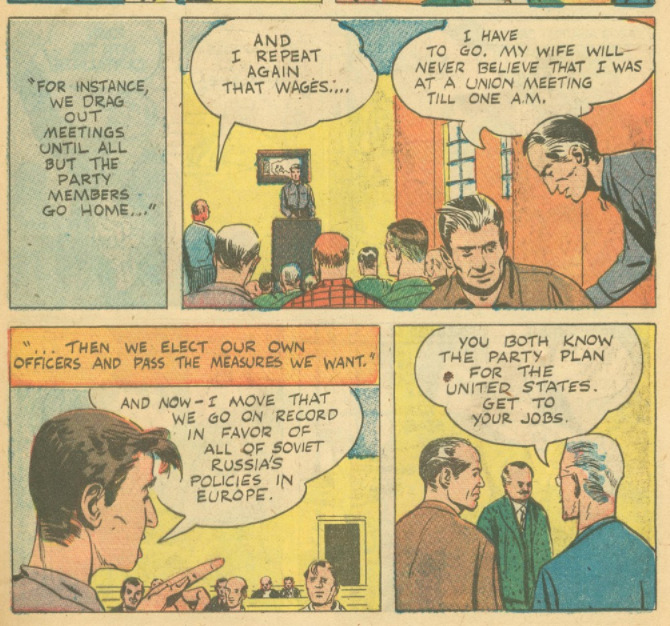 Once they’ve infiltrated and taken over the political class. They use the armed forces and police to begin arresting and imprisoning any dissidents even judges. Their crimes? “Plotting against the state,” says one military officer. 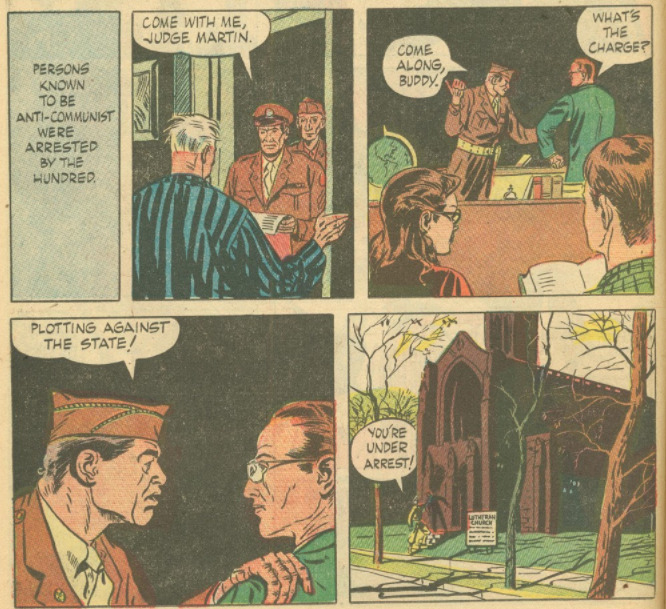 In an all too similar comparison to the much-talked about vaccine passports, the comic sees the communists implement ration cards so that only those deemed worthy by the state can receive them.

If you don’t have one of these cards you don’t get any food. On top of this it also shows how some businesses are pawns in the game as a store owner says, “I’m sorry, Mr. Green. If I gave food to you they would take my own card away.” 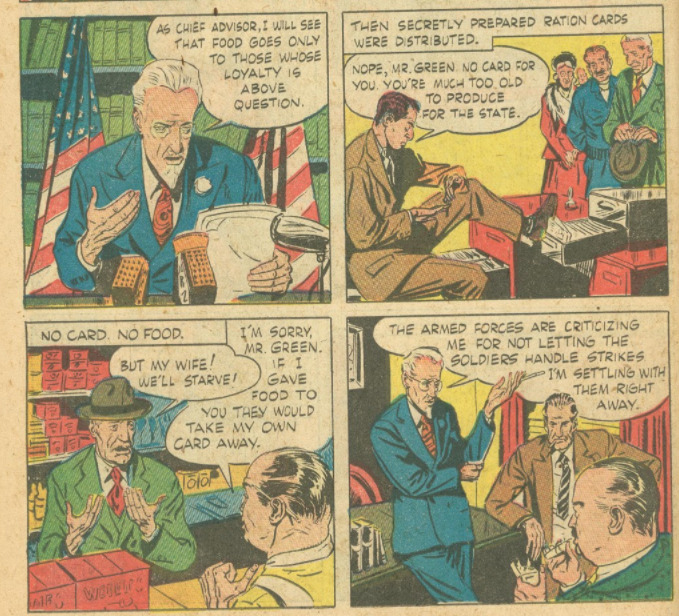 And maybe the biggest prediction the comic makes is how they infiltrate the schools.

The book reads, “New professors taught communism in schools. Even in the grade schools.” One teacher even tells her students, “Remember! You are supposed to obey the state, not your parents.”

It sounds a lot like former Virginia Governor Terry McAuliffe when he said in a recent debate with Glenn Youngkin, ““I’m not going to let parents come into schools and actually take books out and make their own decisions.”

McAuliffe added, “I don’t think parents should be telling schools what they should teach.” 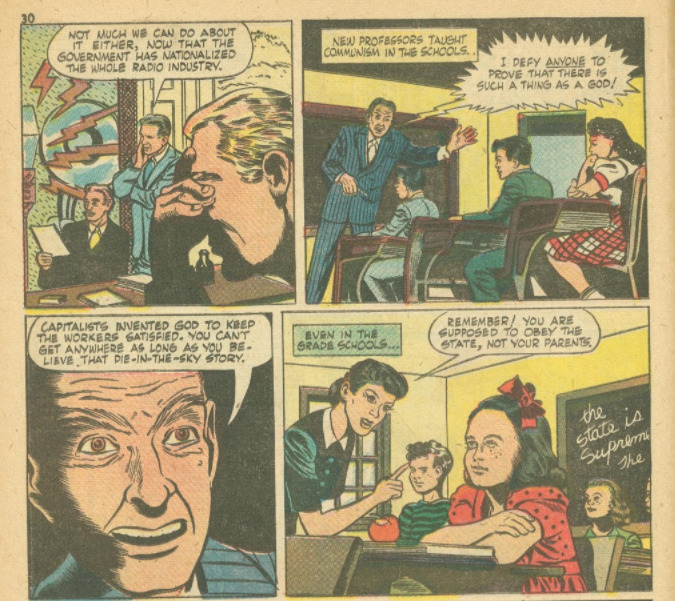 It continues, “But you cannot assume your individual rights without assuming individual responsibility. If you want to keep on living in freedom, you must know who the Communists are – and their methods of working. You must recognize the Communist Part line in action and separate Communist propaganda from the factual news of the day.”

“You are on the defensive in this battle. You owe it to yourself to know all about the invader. He knows more about you than you suspect,” the book concludes.

Finally, the book lists out the Ten Commandments Of Citizenship to be used to fight communism. 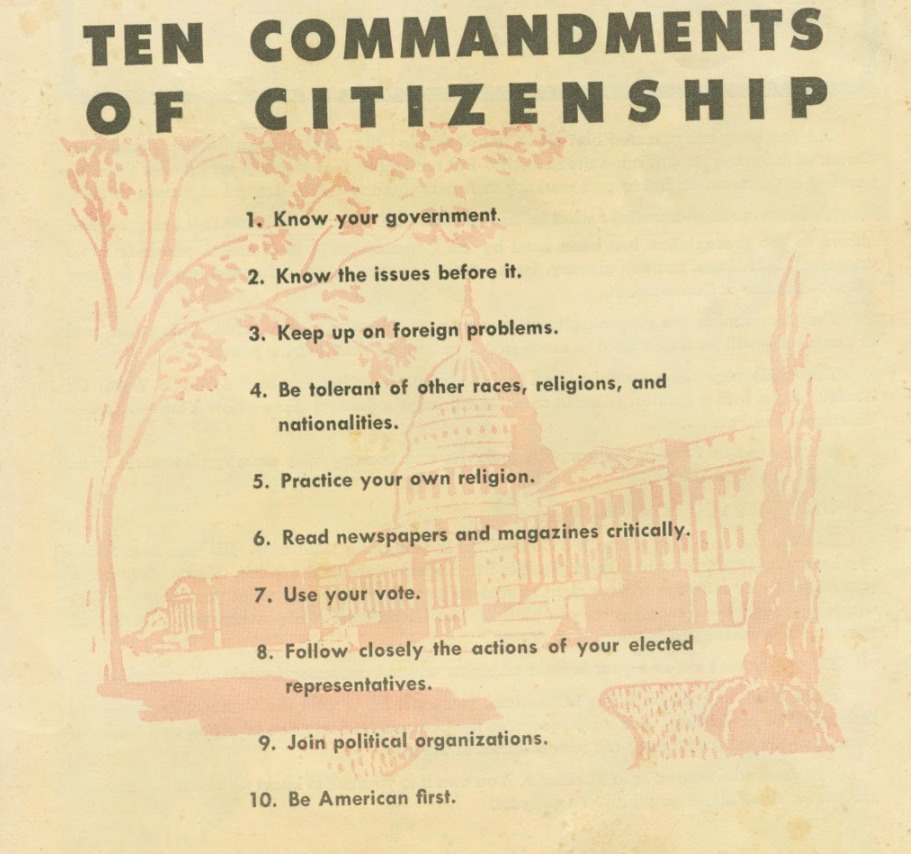 What do you make of how similar Is This Tomorrow is to the current state of modern America?