Gonzalez took to Twitter where he wrote, “Dave Chappell[e] trashes white people but makes a few lame but un-PC jokes about transgenderism so conservatives claim him as a hero.”

He added, “An NBA player criticizes Nike for its ties to China while praising Nike’s stance on BLM and LGBT so conservatives claim him as a hero. Please stop.” 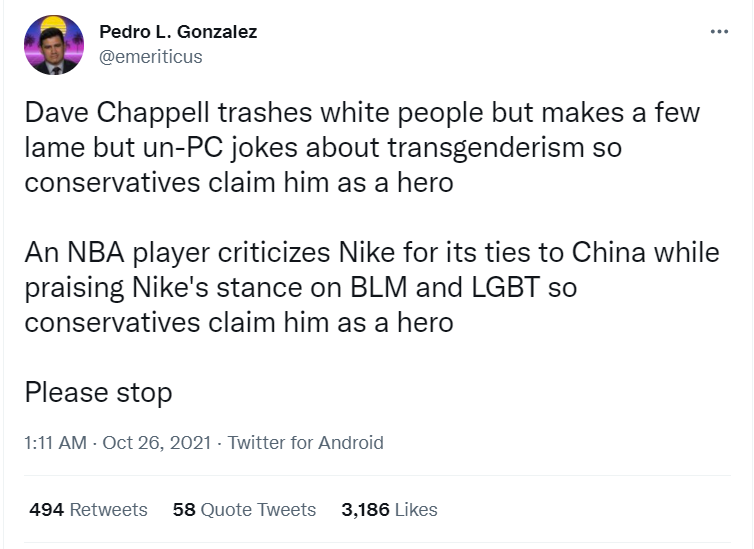 In a subsequent tweet Gonzalez added, “And the woke critique of China will be happily embraced by neocons looking for a way to take their trash ideas and wed them to pop culture. ‘Hey you kids want to go to war with China for freedom?’ says John Bolton, bouncing a basketball.” 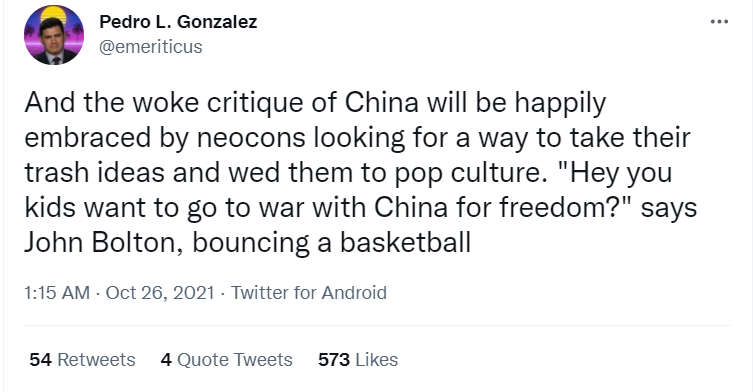 He further added, “Also, the Chapelle (sp?) non-controversy has totally eclipsed worker strikes, which is convenient for the media. Why cover the growing working class revolt when you can run endless coverage of blobby Netflix staffers angry at Chapelle (sp?)?” 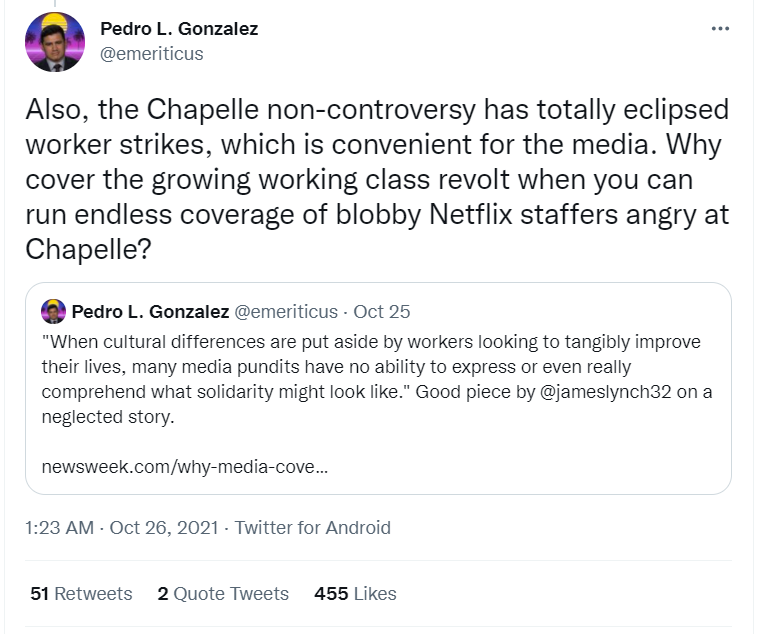 To Gonzalez’s point Dave Chappelle does seemingly make it clear what his real opinions are albeit it is a comedy special, so who really knows what exactly Chappelle thinks.

In the most recent Netflix special, The Closer, while discussing a transgender person who berated him, Chappelle says, “I’m exaggerating. She’s actually a very nice person. And I’m cool with her now, but boy that s**t got on my nerves. And it got on my nerves because whenever someone says that to me I know they’ve never seen me for themselves. They just repeat what they’ve heard.”

He added, “Any of you who ever watched me know that I have never had a problem with transgender people. If you listen to what I’m saying, clearly, my problem has always been with white people.”

“I have been arguing with the whites my entire career. And just when I thought I had you guys on the ropes you changed all the rules… ‘I’m a girl now, n***er, and you must treat me as such. Call me a girl, n****er.’ It’s annoying as f***,” he said. 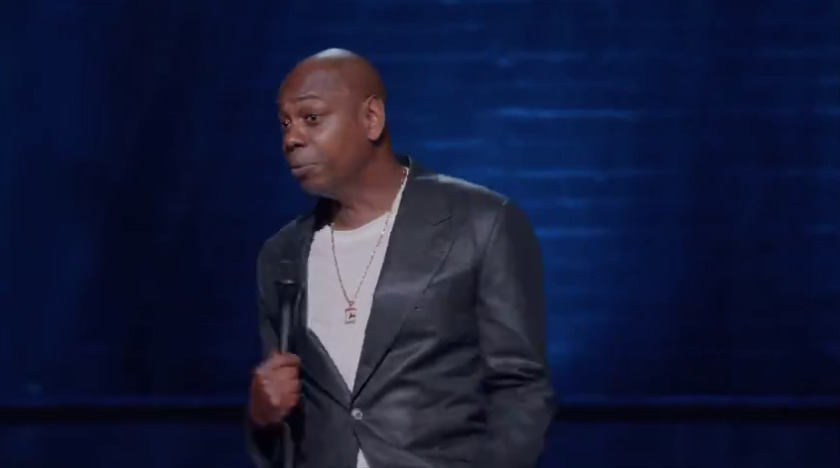 At another point during the special he also says, “For the Thursday that’s Thanksgiving and I’m in a totally different bar. And this bar is not a nice place. It’s foul. It’s one of those bars where the top shelf should be under the sink. This is where the poor whites drink. The tiki torch whites. You know what I mean. Them white people that believe in Q and they love Trump. You know what I mean? Like Michigan white people.”

We are the news now! 📰 pic.twitter.com/IQgEJSfy0e

As critics of Gonzalez’s would point out Chappelle doesn’t just go after white people. The Daily Caller’s Geoffrey Ingersoll replied, “He trashed Catholics too, but you’re missing the point. I think what conservatives admire in Chappelle is that he is truly equal opportunity. Everyone gets some. No one is sacred.” 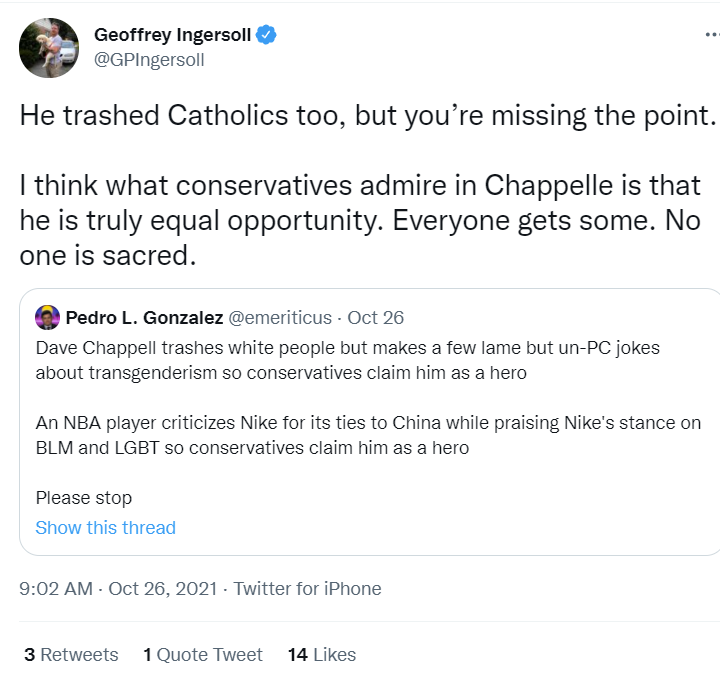 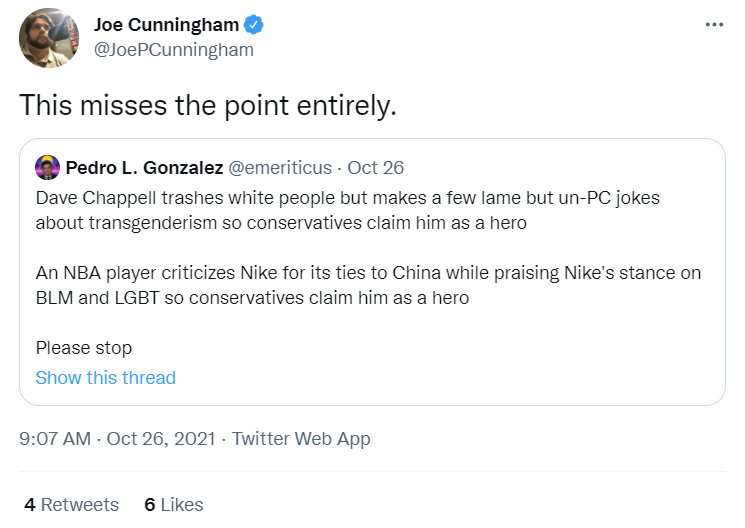 In response to these criticisms, Gonzalez elaborated on the point he was making.

He tweeted, “Conservatives have lost every single culture war battle because they think being friends with, admiring, and patronizing people who hate them is actually a good thing — which is why they deserve to lose.” 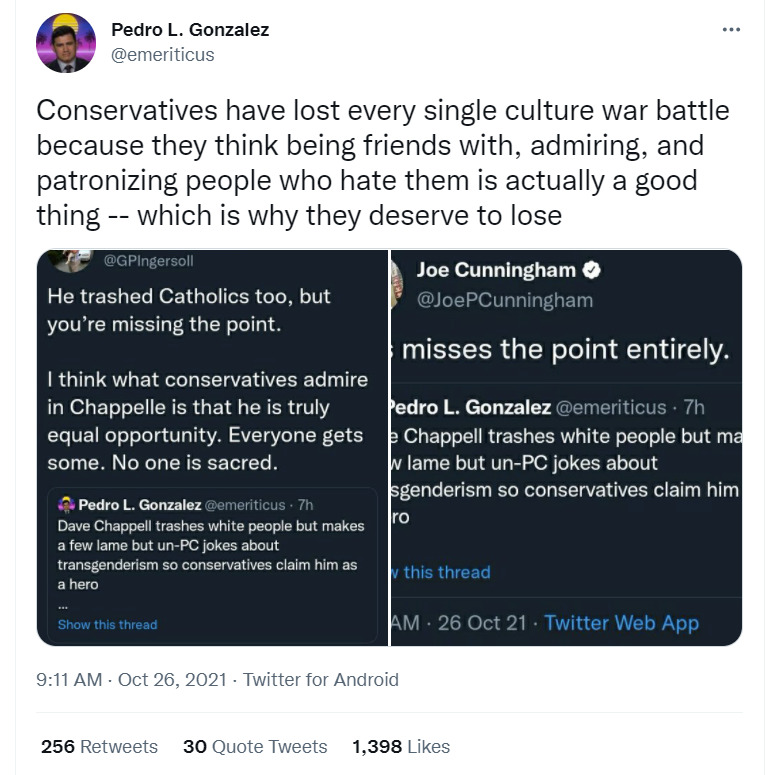 He further mockingly added, “Yeah this guy/organization spit in my face several times and punched me in the eye. I’m still gonna watch the show/buy the shoes. That’s called principles.” 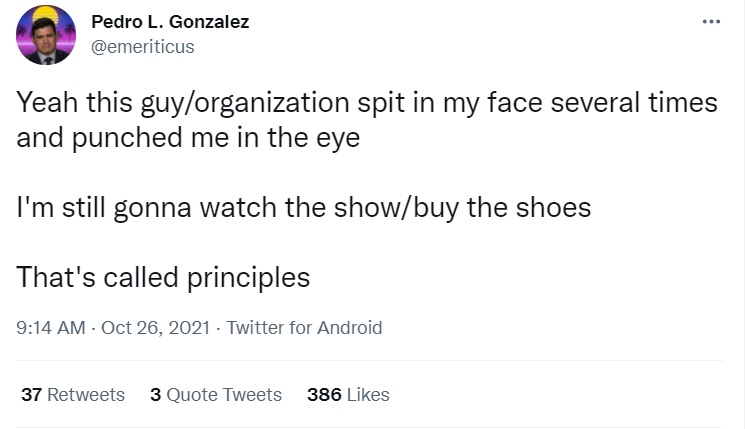